The eighties called…they want their “hair bands” back!... 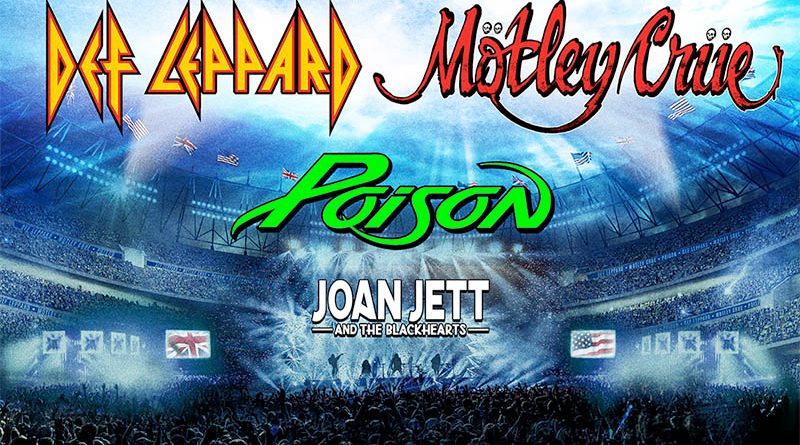 The eighties called…they want their “hair bands” back! After an extended, two-year postponement, this collection of uber rock bands from the 1980s kicked off their long-awaited Stadium Tour at Atlanta’s Truist Park, the home of the World Champion Braves. The anticipation of the 40,000+ fans was paid off with solid performances and plenty of flash from Def Leppard, Mötley Crüe, Poison, and Joan Jett & The Blackhearts on Thursday, June 16th. Even a deluge during Def Leppard’s set didn’t dampen the spirits of the enthusiastic collection of middle-aged nostalgia lovers and younger, newer fans, introduced to several bands through recent movies, limited series and reality TV.

The show actually seemed like more of a festival, beginning in the early afternoon (with warm-up band, Classless Act kicking things off), and ending in the late evening, with Def Leppard. It was a typically hot and humid summer day in the south – but the audience didn’t seem to care – most were there for the duration and never seem to lose their zeal.

Click here for photos of Joan Jett & The Blackhearts at 2013 Riot Fest in Chicago, IL in the QRO Concert Photo Gallery

Click here for photos of Joan Jett & The Blackhearts at Coney Island in Brooklyn, NY on July 14th, 2011 in the QRO Concert Photo Gallery

Joan Jett and The Blackhearts were first in the core lineup. They had been in Atlanta less than three months earlier at the Brookhaven Festival, and they were clearly well rehearsed and well loved. Jett is preternaturally youthful, even at 63. Her trademark fringe of black hair and matching apparel took the audience back in time, as did opening numbers from her earlier career, including “Cherry Bomb” (from her days with Runaways) and “Do You Want to Touch Me” (from her debut album with the Blackhearts). After an additional array of hits, they brought the show home with chartbusters; “I Love Rock and Roll”, “Crimson and Clover”, “Bad Reputation” and “I Hate Myself for Loving You”.

Click here for photos of Poison at MGM Grand Arena in Las Vegas, NV on June 17th, 2017 in the QRO Concert Photo Gallery

Click here for photos of Poison at Ascend Amphitheater in Nashville, TN on June 28th, 2018 in the QRO Concert Photo Gallery

Next, came Poison, who hadn’t performed live together in four years – it didn’t show. Brett Michaels (QRO interview) is the quintessential frontman, with his trademark head bandana and still-long blonde locks (not to mention tight pants). He led the crowd through a twelve-song series, with the aplomb and panache one would expect from titans of glam rock. Never straying too far from their greatest hits, they opened with their 1986 debut “Look What the Cat Dragged In”, then went on to perform a library of classics, including “Talk Dirty to Me”, “Fallen Angel”, “Unskinny Bop” and “Something to Believe In”. The band did, however, delight the audience by throwing in in a couple of surprises, with covers “Eruption” by Van Halen and “Your Mama Don’t Dance” by Loggins and Messina, then ended with megahits, “Every Rose Has It’s Thorn” and “Nothin’ But a Good Time”.

Mötley Crüe then took to the stage, after a long live hiatus (their last tour was the short-lived “Farwell” tour in 2015). Riding a wave of popularity from the recent Netflix film The Dirt, and the Hulu series Pam and Tommy, the Crüe has cultivated a cadre of younger fans, who — in addition to their diehard supporters — had been patiently anticipating their performance. The band looked and sounded great. Vince Neil seemed to have trimmed up a bit for the tour, and Tommy Lee (QRO interview) looked every bit the bad boy rock star – though he could only drum through the first five songs, because as he explained, he had “broken four ribs” less than two weeks prior to the tour opener. Drummer Tommy Clufetos was there to take over, and Lee did come back and forth to the stage during the remainder of their set. The show had the proper amount of spectacle, with scantily clad, femme fatale dancers and backup singers and plenty of flashy multimedia screens and pyrotechnics. They easily transitioned between classics like “Piece of Your Action” (it’s first live performance since 2013) as well as “Dr. Feelgood”, “Looks That Kill” and “Girls, Girls Girls”, as, what can only be described as giant female “blow up dolls”, appeared and flanked the stage. Special guest, Machine Gun Kelly (who played Tommy Lee in the band biopic) joined the band to help perform the first live performance of “The Dirt (Est. 1981)”, from the movie’s soundtrack. The set concluded with “Primal Scream” and “Kickstart My Heart”.

Def Leppard finished the evening (Crüe and Leppard alternate as headliners with each show) with an 18-song set that covered a great deal of their history. Joe Elliot was still in fine form, with a bleached blonde coiffe and a more mature, but cool demeanor. Opening with “Take What You Want”, they immediately brought the audience to their feet. Unfortunately, the weather “gods” were not in their favor, and the rain began during their third number, “Animal”, and persisted for the rest of their performance. Not bowed by the circumstances, they kept up the energy for the next 15 songs, which ranged from favorites like “Foolin’” and “Love Bites”, to “Rocket” and “Bringin’ on the Heartbreak”. Elliot remained in fine voice, and the rest of the band sounded great. Even with one arm, Rick Allen remains a formidable drummer and Guitarists Phil Collen and Vivian Campbell shredded every number. The band didn’t keep just to the old favorites, they also performed live debuts of “Fire It Up”, and “My Guitar” from their 2022 album; “Diamond Star Halos”. Finishing strong with four of their biggest blockbusters; “Hysteria”, “Pour Some Sugar On Me”, Rock Of Ages” and “Photograph”.

While some left for shelter from the rain, most fans stuck it out and were rewarded with great performances all around. The Stadium Tour was off to a strong start.

• Rebel Girl
• Victim of Circumstance
• Cherry Bomb
• Light of Day
• You Drive Me Wild
• Everyday People
• Fake Friends
• Do You Want To Touch Me (Oh Yeah!)
• I Love Rock and Roll
• Crimson and Clover
• I’m Gonna Run Away
• Bad Reputation
• I Hate Myself for Loving You