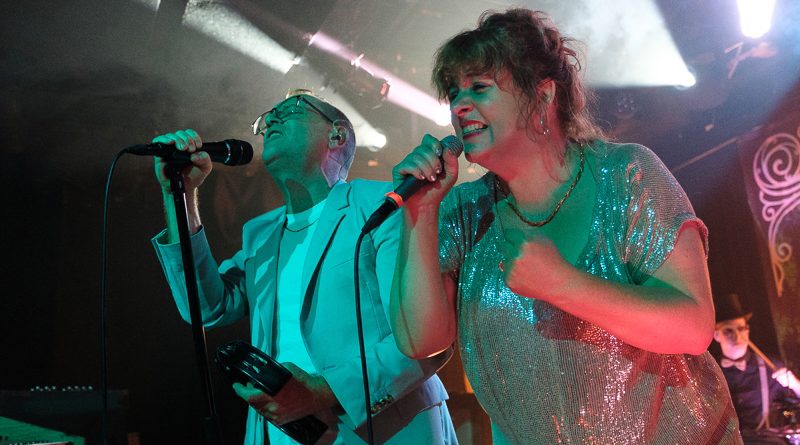 QRO’s review of Stars at Brooklyn Steel in Brooklyn, NY on December 10th, 2018

Photos of Stars at 2018 Lollapalooza in Chicago, IL

Photos of Stars at The Fillmore in San Francisco, CA on March 5th, 2015

Photos of Stars at 2013 Riot Fest in Chicago, IL

Photos of Stars at Arts & Crafts Field Trip Festival in Toronto, ON, Canada

Photos of Stars at Music Hall of Williamsburg in Brooklyn, NY on March 8th, 2013

Photos of Stars at 2010 Osheaga

Photos of Stars at The Troubadour in Los Angeles, CA on June 22nd, 2010

December is a time for annual holiday traditions, from giving gifts to Merry Christmas, Charlie Brown. That includes holiday concerts, though so many went by the wayside due to COVID shutdown. Thankfully they’re coming back, whether it’s Yo La Tengo’s epic Hanukkah run (do you think James McNew ever complains about having to work on Christmas?…), or Stars’ holiday shows, which came to New York’s (le) Poisson Rouge on Wednesday, December 7th.

Though the band is all from Montreal, and were part of the ‘Canadian Invasion’ of the aughts, singer/keyboardist Torquil Campbell and singer/guitarist Amy Millan noted that the group actually formed right there in the Big Apple during its own fertile aughts rock scene, in the loft of the Yeah Yeah Yeahs – though neither they, the loft, nor the other acts like fellow Canadians Metric were ever mentioned in the documentary of the time, Meet Me In the Bathroom (QRO review), “Don’t worry about Canada…” Campbell in particular was in high spirits, with numerous between-song stories to the intimate crowd at (le) Poisson Rouge (QRO venue review) that came right up to the front of the stage (were told to watch out for the pedals & equipment at the lip of stage by a roadie; of course someone brought roses for the petal-loving act). There was his description of the New York “waiting for” his thirteen-year-old, “No, it’s very loud, you’ll have a nervous breakdown, or suddenly someone will scream in your face, or you’ll fall in love with someone who’s a really terrible person,” with which Millan pointed out that it, “Sounds amazing!” Campbell agreed.

Stars released their latest From Capelton Hill (QRO review) earlier this year, but this was a special romp through their now-long career, going back to “Counting Stars On the Ceiling” from 2001’s Nightsongs – which Campbell noted was about their “first dream we ever had,” right nearby on Christopher Street. Yes, there were sing-alongs to old hits such as “Elevator Love Letter”, “Take Me To the Riot”, and “Your Ex-Lover Is Dead”, but also newer pieces like “Hold On When You Get Love and Let Go When You Give It” (2012’s The North) and “Fluorescent Light” (2017’s There Is No Love In Fluorescent Light – QRO review). And there was a good chunk From Capelton Hill.

At one point Campbell pointed out that the crowd was probably saying to themselves, “Where’s the fucking holiday part?” It arrived with their own new yuletide single, “Christmas Anyways”. Describing Stars as a “kitchen sink band,” for when “You’re doing the dishes, or driving to your mum’s funeral, or you just broken up with someone, or you’re eating a chili dog, or no one can remember your name – we’re there for you,” so had to be there for you at Christmas, when, “Much of the time, you do all those things, simultaneously.” Of course, Campbell noted that, “Because I have a lot of problems, this song is a little bit dark…”

He also noted that, while the band doesn’t care how you listen to their music, but if you buy it, half the money goes to Native Women’s Shelter in Montreal. Also, a dollar from every ticket (admittedly not cheap tickets, though (le) Poisson Rouge’s drink prices haven’t inflated as much as other places), “Went to making sure women have reproductive rights in your country.”

Though Campbell & Millan were consummate frontpeople, including a debate as to whether whenever she loses something, she says he stole it, “Which as a white guy, is probably true,” the rest of the band were also on excited point. Of particular note was horn player David French, who had flown in as a special addition. He was stuck all the way on the far side from the entrance to the stage, so when everyone else left for the encore break, he just kneeled down until they returned.

That encore return included Campbell coming out early because he’s a “people-pleaser,” to promote their Patreon page, as Stars is trying to live a “pimp-free existence,” from all the pimps like Google & Facebook trying to take a chunk of them. “If you like this high, it’s this, in digital form”. And they closed out the night in the most NYC holiday way ever, a cover of The Pogues’ classic “Fairytale of New York” (the b-side to “Ex-Lover” single), including French on flute (thankfully Millan garbled something that wasn’t the original, now-controversial f-word in the song).

We all need some happy holidays, in this time of war, disease, strife & more. Stars brought what we needed.