Stars shined on a Saturday night in September in New York City. The Montreal, Quebec band first burst onto the States back in 2003-2004, with fellow north-of-the-border acts like Broken Social Scene (QRO interview), Arcade Fire (QRO live review), Metric (QRO live review) and The Stills (QRO interview), thanks to Juno-nominated Heart and Set Yourself on Fire.  And the group, fronted by singer/keyboardist Torquil Campbell and singer/guitarist Amy Millan, kept their grand, orchestral style of romance flying last year with Polaris Prize nominee In Our Bedroom After the War.  Playing New York City on September 20th, the band was able to stretch out across the mammoth Terminal 5.

The new Terminal 5 (QRO venue review) in west Midtown can be a difficult place to catch a show, thanks to its enormousness, creating a massive herd of fans on the stage floor, and ringing the two balconies with onlookers.  What’s more, its very size can make any band seem small, as well as in danger of being overshadowed by the venue’s impressive light show.  But Stars utilized their epic aura to make Terminal 5 enveloping, not overwhelming, right from their high, expansive, enchanting opener, “The Night Starts Here”.  After Starting the Night on a high note with that Bedroom track, Stars followed it up with their original breakthrough, “Ageless Beauty”.  After the enchantment of “Night”, the Set Yourself single brought more of a fun side to the set, carrying nicely into the rocking rhythm of album-mate “Soft Revolution” and its anthem-like bright push. 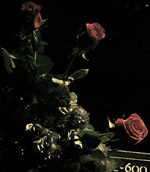 Stars is a band, however, that can sometimes get lost in their high romance, whether in their vain attempts to throw the roses that decorated the stage up and into the crowd (most fell apart into petals and stems when barely fluttering into photo pit), or in some of their higher and slower songs.  Such was the case with Bedroom’s “Window Bird”, a touch too twee, Campbell’s “Reunion” from Set Yourself, and the sharper “Violent” (from 2003’s Comeback EP – stronger, perhaps, might have been that record’s title track).  But the bitch was back in Bedroom’s “Bitches in Tokyo”, its fuzzier rock more reminiscent of other ‘Canadian Invasion’ acts.  Perhaps-favorite “My Favorite Book” (from Bedroom) brought a great carry-along swing, with a slightly funk backbeat that made it altogether groovin’. 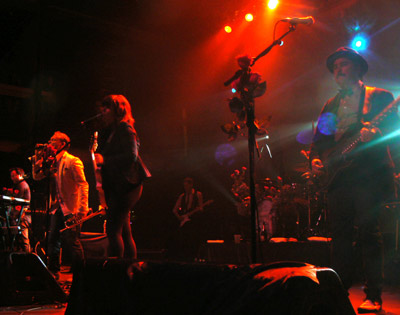 While Stars curiously relied less upon their most recent LP than upon the one before it, they did hit up a couple of tracks from this month’s digital/tour EP, Sad Robots, starting with the slow, synth choral of “Going, Going, Gone” (admittedly, that’s actually a number from the 2001 debut Nightsongs, redone live on Sad Robots).  Perhaps placing the similar-sounding, but not as strong, “Look Up” right afterwards wasn’t the best spot for the Heart piece; likewise, putting the first ‘original’ Robots track of the night, “A Thread Cut With a Carving Knife”, right after Bedroom’s “Midnight Coward”, meant that the high, grand orchestra of the two songs couldn’t help but be compared to one another.  But that all got lost in the “Undertow”, with the wonderfully slow, enchanting carry-swing of that Robots number setting Stars up for a very strong finish.  There might not be a better romantic catch on Set Yourself than “What I’m Trying To Say”, though the crowd favorite single “Your Ex-Lover Is Dead” challenged it with dueted, orchestral expanse to go into the encore break (and Heart’s “Elevator Love Letter” in between served as a missive to the Big Apple).

Stars returned to rapturous applause with Bedroom’s own top single, “Take Me to the Riot”, the epic number filling the massive Terminal 5.  Yet the band ended on a Set Yourself three-peat, starting with the keys-heavy elegy “One More Night”, then the grand, touching synth of “Calendar Girl”, before the record’s relaxed, smooth, extra-fine title track to close out the night.  Campbell and Millan were engaging as they played off one another (even if Campbell’s stabs at political commentary fell pretty flat – American bands don’t play Montreal and comment upon Quebec independence or Conservative PM Stephen Harper…), though bassist Evan Cranley shouldn’t be overlooked.  Yes, the crowd was mostly female, but Stars isn’t an act that shies away from their emotions, but embraces them in an ecstasy of epic proportions.  And even the cold, cavernous confines of Terminal 5 couldn’t hold that back.

Stars playing “Take Me To the Riot” live at Terminal 5 in New York, NY:

Kings of Leon : Only by the Night