Science and comedy teamed up as StarTalk came to Beacon Theatre.... 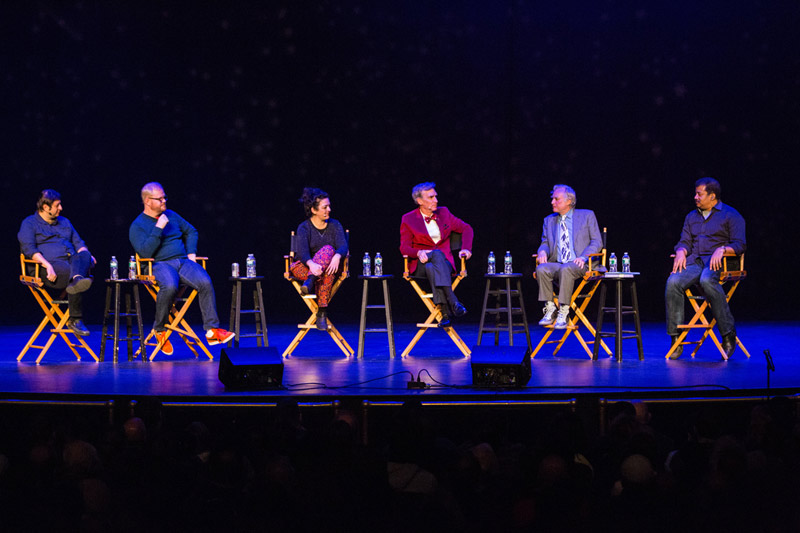 This might be the era of reunions, revivals, and remakes, but it’s also a time when genre walls are breaking down. Whereas once metalheads and punkers couldn’t break bread together (even on their foreheads), today rappers like Kanye West work with indie-folk artists like Bon Iver – and that’s still just within music. Computer chip makers Intel and music/news magazine VICE teamed up for The Creators Project, which brings artists from different modes of expression together, like painters and playwrights. One of the most interesting, and most significant, twenty-first century crossovers has been StarTalk, the podcast in which astrophysicist Neil deGrasse Tyson has brought great scientific minds and teamed them up with great comedians to deliver science to the masses. Tyson teamed up with comedian Eugene Mirman to bring special guest Richard Dawkins, along with Jim Gaffigan, Maeve Higgins, and Bill Nye to New York’s Beacon Theater (QRO venue review) on Tuesday, November 18th for a special live edition.

Tyson is already well known in the larger world for being, “A champion of science communication,” as Mirman introduced him, explaining science to wide audiences in engaging ways, through books, his recent revival of Carl Sagan’s Cosmos television series, and StarTalk. Mirman is an influential figure in the alternative comedy world, and has done his own crossovers such as having musicians and even Tyson himself at his Eugene Mirman Comedy Festival every September (QRO live review). However, the clear special guest at this edition was Richard Dawkins, one of today’s leading evolutionary biologists in both the scientific community and the world at large. The event, which was broken into three recorded segments (plus a short closing Q&A), was focused to evolution in reflection of that (it thankfully didn’t get into Dawkins’ rather militant atheism, but also missed his development of the concept of memetics, that ideas that self-replicate like genes). 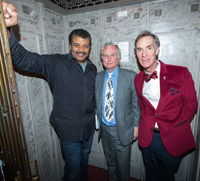 The evening started with a discussion of evolution as a whole, Tyson challenging Dawkins to sum up in just thirty seconds what took Charles Darwin years. Tyson was largely the moderator, directing the conversation, usually directing back to Dawkins. You know that comedians like Mirman, Gaffigan, and Higgins would get their jokes in, and their questions (pale, balding, glasses-wearing Gaffigan’s “Why do I have so many recessive genes?”, land-living Mirman’s “Why don’t I have wings?”), but it was surprising how much Nye brought the funny as well. Bill Nye is known as ‘The Science Guy,’ bringing science via children’s programming, but here he did get to exercise some more adult jokes (evolution happening through sex did lend itself to the bluer humor). The most interesting aspect of the first part was the discussion of what aliens might look like. Dawkins pointed out that as some things have arisen independently many times out of evolution, such as sight, those things would be more likely on aliens than rarer developments found on earth (and thus human-level intelligence, which has only appeared once, would be high unlikely). Or maybe the biggest revelation, which certainly came as a shock to Tyson, was that Dawkins is married to a former Dr. Who companion (Lalla Ward – who had previously been married to her Fourth Doctor, Tom Baker).

For the second part, Tyson turned the conversation to specifically human evolution. Once again, Tyson directed the questions to Dawkins, and that enabled Dawkins to discuss how, for instance, humans and chimpanzees have a common ancestor – that they both could mate with and produce children (though it doesn’t still exist). A very descriptive metaphor was of you holding hands with your mother, who holds hands with her mother, who holds hands with hers, all the way back to someone who could also hold hands in a chain that would lead down to a chimpanzee. This also pointed out that evolution is a series of very slight changes, so it can result in flawed designs – Dawkins used clinical examples such as our eyes or the laryngeal nerve from the brain going all the way down and around the arteries of the heart before reaching the right nearby larynx; Tyson and Nye pointed to more obvious examples such as having sex organs and waste organs sharing a tube, or breathing and eating sharing one. 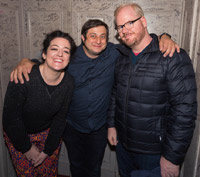 If the first part looked at evolution large, while the second brought it to the more relatable human level, the third part took it to the active arena: manipulating evolution (after a discussion on whether males could lactate, initiated by a question from father of five Gaffigan). Tyson was particularly interested in the idea of bringing extinct species back – or as Mirman summed it up/dumbed it down, “So could Jurassic Park be real?” The segment closed with Tyson polling each panelist on what species they’d like to bring back: Gaffigan wanted to try mammoth meat (he is the author of Food: A Love Story), while Eire native Higgins wanted to bring back the majestic Irish Elk.

As the panel ran long, there was only time for a few questions, which didn’t stop two long lines from futilely forming in the main aisles. The questioners seemed very ready and eager, from one who brought a quote on man’s destructive nature to a seventh grade science teacher who wanted her hat signed to show off to her students. There was a feeling from those who spoke that they seemed to want to show off how smart they are (like one young man who wanted to ask Dawkins about how he should deal with his born-again Christian mother – Tyson nicely noted that his next StarTalk would be with Dawkins on that very subject, so the questioner should hold his inquiry until then; it was good that the evening never veered into controversy or secular preaching).

Even with all of the cross-styling these days (witness, say, a music magazine reviewing a science/comedy event…), combining the serious, detailed, and egg-headed nature of science with the unserious, rambling, lower-brow nature of comedy could go very wrong (for instance, Cop Rock wasn’t ahead of its time; ‘musical crime drama’ was just a bad idea…). However, the engaging personalities and high interest of all involved (including comedians who want wings – either on their back to fly or from dino-chickens to eat) made for a great evening of StarTalk.