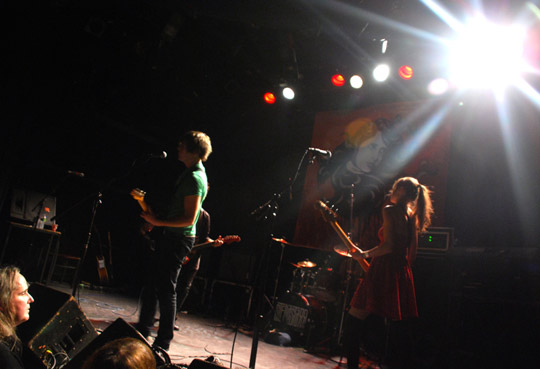 QRO has covered few bands as often, and over as long a period, as stellastarr* (QRO spotlight on).  From their opening of Gramercy Theatre (QRO venue review) on March 7th, 2007 (QRO live review), there have been multiple shows in multiple venues, big and small, in multiple cities.  There have been two separate interviews, and the band finally releasing Civilized (QRO review) – first seen as a song (QRO video), before that track was dumped and the name just retained as a record title.  It even got to the point of recognizing other repeat fans.  So does familiarity breed contempt, or disinterest (a fate better or worse, depending on your point of view)?  Not when they played New York’s Bowery Ballroom on Wednesday, December 16th to close out this decade we never named. Click here for photos of stellastarr* at Highline Ballroom in New York, NY on July 16th, 2009 in the QRO Concert Photo Gallery

Click here for QRO’s review of stellastarr*’s first of five nights at Piano’s in New York, NY on December 2nd, 2008

And if you were gonna have familiarity, couldn’t find a more familiar venue than Bowery (QRO venue review).  While Gramercy’s opening was just part of a wave of new venues that hasn’t stopped, from the massive Terminal 5 (QRO venue review) to the tiny Littlefield (QRO venue review) (not to mention all the places that have closed, reopened, relocated, etc.), Bowery Ballroom has held true and stayed put for over a decade (which is a long time for an alt-venue).  It has a ‘just right fit’ for indie bands – not a tiny closet or basement like you might find a few blocks north, not an oversized semi-converted dance club or warehouse, not located out in the sticks (i.e., Brooklyn), Bowery Ballroom is a place any indie music fan in New York will & should see a little too much of. Click here for QRO’s review of stellastarr* at Great Scott in Allston, MA on November 5th, 2008

Click here for QRO’s review of stellastarr* at Highline Ballroom on August 23rd, 2007

But there’s a reason to see so much of Bowery, just as there’s a reason to see so much of stellastarr*.  Like Bowery, there’s a ‘just right fit’ to the band: they don’t play every other week like some young Brooklyn outfits, but never disappear for too long.  Civilized makes three full-lengths – just enough for them to hit up multiple tracks from each record, while leaving off the ones no one needs and only missing one or two you definitely wanted (giving you a reason to see them again).  Their alt-rock is evocative enough to give it power & touch, but also catchy & danceable enough to make it pleasing & memorable.  Their style isn’t alien, but also not omnipresent, and the long spacing between releases has meant that they don’t have to change things up too much to avoid being a retread. 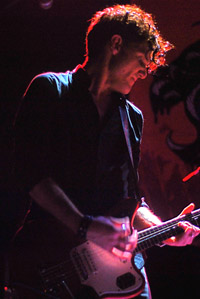 There’s just enough different & the same about a stellastarr* set list, as well.  Whatever you might have been expecting them to start off with, it certainly wasn’t the brand-new "Winter Song" [note: name taken from set list – QRO photo – sounds a lot like a working title], a more stripped, yet piercing take on their evocative emotion.  The more unusual-sounding "People" off of Civilized followed, and then two of the band’s best- and longest-known songs, "Somewhere Across Forever" and "Sweet Troubled Soul".  stellastarr* have long played "Troubled Soul" – by far their most successful single – early in the set (did it that way at Gramercy), and it’s actually a shrewd move: gets the crowd going early (and not waiting for the piece throughout the night), and nicely opens ears up for what is to come. There are still some single-ish songs you know stellastarr* are going to play, from the evening’s closer "My Coco" to Civilized‘s "Graffiti Eyes", not to mention encore break lead-in "Jenny" & 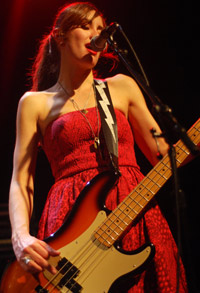 the über-emotional "On My Own", which sees singer/guitarist Shawn Christensen (QRO interview) contorting as he’s emoting.  But did you guess they’d bring out Civilized & stellastarr* producer Tim O’Heir to play guitar for "Own" and "Love & Longing" (both from Harmonies For the Haunted, the one he didn’t produce…), or that they’d bring out a horns section for Civilized‘s "Prom Zombie"?  Did you know how much live you’d like Civilized‘s "Freak Out", or stellastarr*‘s "No Weather"? 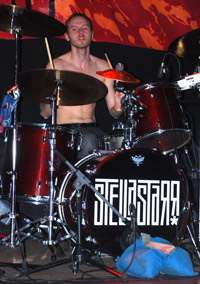 Not that there aren’t constants, especially with regards to main four on stage.  Christensen still nicely emotes without going overboard, guitarist Michael Jurin is still having the most fun (and shaking that hair curl, which dangles over his forehead), bassist Amanda Tannen (QRO interview) is still impossibly good-looking (and still plays in heeled boots – giving female fans another reason to be haters…), and drummer Arthur Kremer is still shirtless, with the nipple-tape asterisk.  The stellastarr* crowd is still more female than your average alt-crowd, but not so much that males get that uncomfortable minority feeling.  The lighting is still strong, if over-weighted on backlight, though there seemed to be more color this time (in the band’s clothes, as well – they weren’t all all-dressed in black). 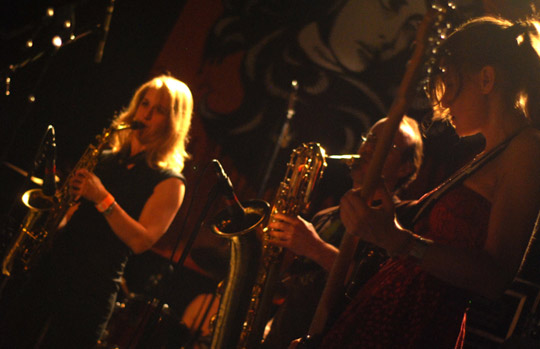 When the biggest surprise at a show is that the creepy balding, overweight, middle-aged fan that’s always right in front of the girl in the band isn’t there, you know you’ve seen the act quite a lot.  And at a venue where you know security?  But stellastarr* at Bowery Ballroom was your most comfortable band, in the most comfortable of settings.

Letting Up Despite Great Faults : Self-Titled