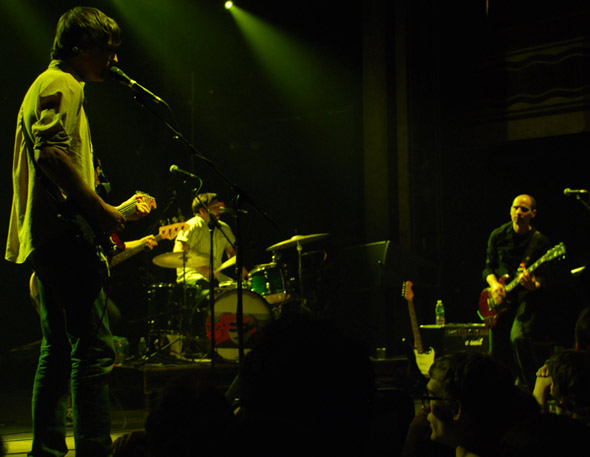 In 2010, Stephen Malkmus answered the prayers of indie fans everywhere by finally agreeing to a reunion of his seminal nineties act, Pavement, and the band proceeded to go on a whirlwind worldwide tour.  In 2011, Malkmus returned to his post-Pavement group, Stephen Malkmus & The Jicks, with the new Mirror Traffic (QRO review).  How would the sometimes-mercurial Malkmus act?  How would he be received?  Very well, judging by the New York show at Webster Hall, a year-and-a day after the final of Pavement’s five nights in New York (QRO review), on Sunday, September 25th. 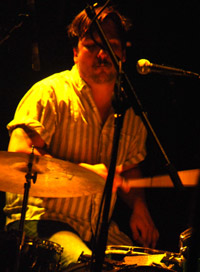 SM’s profile had been raised considerably by the Pavement reunion, with he & The Jicks playing larger places than he had after 2008’s Real Emotional Trash (QRO review).  The New York date had originally been booked in the three-floor converted West Midtown warehouse Terminal 5 (QRO venue review) on the 26th, before being bumped back a day and over to Webster Hall near Union Square.  While photogs no doubt wailed, and industry-hipsters poo-poohed that Malkmus & his Jicks weren’t such a big draw, the move was a boon to fans, who didn’t have to deal with Terminal 5’s drink prices, ultra-mad crush of bodies, and distance from the stage (rule of thumb: if it’s bad for photogs & industry-hipsters, it’s good for fans…).  And Webster Hall (QRO venue review) is nothing to sneeze at, with two floors, a still-large crush of bodies, and drink prices that are anything but cheap.  Plus, Webster has a beer man, who was roaming in the crowd…

The Jicks opened with “Baby C’mon” from 2005’s Face the Truth, and closed with “1% of One” from 2003’s Pig Lib, but otherwise the set was almost entirely drawn from the newest album, with some non-LP material thrown in.  Still, “Baby” was a strong opener, almost asking the crowd to “C’mon” and get back into The Jicks – not that any such request was needed.  The audience was well versed in Mirror and more, cheering not just its pieces such as a great “Brain Gallop” and “Tigers”, but also “Pennywhistle Thunder” from Cold Sin EP, and even the brand-new, not-yet-on-record “Independence St.”.  The middle of the set did all run together a bit with its Traffic jams (as well as Pig Lib‘s “Animal Midnight”), but rockin’ single “Senator” lit everything up – is there a better line than, “I know what the Senator wants / What the Senator wants / Is a blowjob”? 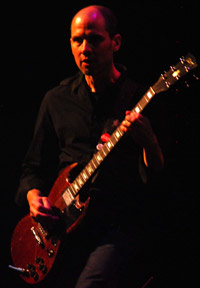 Well, maybe, “I cannot even do one sit-up / Sit-ups are so bourgeoisie”, from Traffic‘s “No One Is (As I Are Be)”, with which the band went into their encore break, only to return with a cover of Sweet’s “Love Is Like Oxygen” and then, thanks to a fan request, “1% of One”, including the jam open to the number.  There was a bit of banter, including Malkmus wishing one fan a happy birthday (after the fan announced that it was his birthday), SM remarking that the last time he was at Webster Hall, it was to see The Silver Jews (QRO album review) – unfortunately no ‘cover’ of “Send In the Clouds” from The Jews’ American Water, a record Malkmus himself played on as a not-golden non-gentile, like the band did at the far-smaller Maxwell’s (QRO venue review) across the river in New Jersey back in 2007 (QRO review – but that time, it was Jews bassist Mike Fellows who had been making the request…).  Bassist Joanna Bolme was fairly restrained, though did introduce new drummer Jake Morris (old Jick drummer Janet Weiss, originally of Sleater-Kinney, also with Bolme of Quasi – QRO spotlight on – is now drumming in super-girl-group Wild Flag – QRO album review), while guitarist/keyboardist Mike Clark had some choice lines, such as, “Do you smell something burning?  ‘Cause I think we just lit the air on fire!”  But the night was about Malkmus, returning to get his Jick on.