<img src="http://www.qromag.com/wp-content/uploads/2011/08/stephenmalkmusmirror.jpg" alt="Stephen Malkmus & The Jicks : Mirror Traffic" />If there is a return to origins as Malkmus returns to The Jicks after last year's Pavement reunion,... 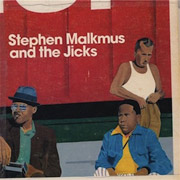 By just looking at the tracklisting of Mirror Traffic, the (relatively) high number of songs and their length (or better, shortness), one could immediately guess a departure from prior record Real Emotional Trash (QRO review) and its long atmospheric tunes.  Maybe after seeing that nearly half of the songs are under three minutes long, some Pavement hardcore fans could have even hoped that somehow the 2010 reunion tour (QRO review) had brought Stephen Malkmus back to his origins.  And in a way the directness of this record may make it sound like some of the Pavement stuff, but if there is a return to origins, it’s more to the first solo album Malkmus released in 2001.

Malkmus has always written two kinds of songs for the Jicks: long, complicated, guitar-heavy ‘jams’ and simpler, catchier songs.  The first self-titled album emphasized the latter, while the three that followed – Pig Lib, Face the Truth, and Real Emotional Trash – inclined more towards the former.  Mirror Traffic is probably the poppiest, most accessible and concise album Malkmus has ever written.  The long, cerebral guitar solos of the jammy, psychedelic Real Emotional Trash gave way to short, elliptical, catchy songs.  The last three albums were more angular and expansive; this new effort is more melody-oriented and straightforward, with a fragile bluesy vibe.  What hasn’t really changed is the signature talk-sing vocals full of dry wit and sarcasm.

Click here for photos of Stephen Malkmus & The Jicks as 2008 Siren Music Festival on Coney Island in Brooklyn, NY in the QRO Concert Photo Gallery

The album (originally called “LA Guns” but then renamed Mirror Traffic to avoid a lawsuit) was produced by Beck Hansen (QRO album review) and engineered by Darrell Thorp.  Beck is the first producer to work with Malkmus since Pavement’s fifth and final album, Terror Twilight, produced by Nigel Godrich (who was also initially considered for this album along with James Murphy of LCD Soundsystem – QRO live review).  The two musicians had known each other since the Lollapalooza days, so a couple of years ago when Beck started producing, he gave Malkmus a call to let him know he’d be interested in producing his next album.

Mirror Traffic had a very long gestation.  Most of the songs had already been played at the end of the Real Emotional Trash tour, and in January 2010 the basics were laid down at Sunset Sound Studios in L.A. over just a couple of days, but everything was then put on hold by the Pavement reunion tour.  The album was finally finished off mainly at Beck’s home in Malibu between last April and May.

Janet Weiss (who had been with the Jicks since 2006) played drums & backing vocals on the record but by the time a release date was set she decided to leave due to her commitments with supergroup Wild Flag (QRO photos), currently on tour.  Her place was taken by ex-Joggers Jake Morris.  Long time Jicks members Joanna Bolme and Mike Clark recorded the album too.

Mirror Traffic opens with “Tigers”, a ‘70s British, Nick Lowe-y pop song, probably the catchiest song of the whole record, with simplistic chord progression and what at first seems to be a classic pop song structure, but it’s then ended with a frantic time-signature change.  “No One Is (As I Are Be)” (yeah the title sounds like a grammar puzzle) is a bit Bert Jansch-y and a bit Beck-y, coloured by soft brass arrangements at the end.  Malkmus voice sounds comforting and melancholic at the same time while singing about midlife vulnerability.

After “Jumblegloss”, which sounds more like an interlude, the album carries on with two songs that somehow work as one: “Asking Price”, a simple bass line and two guitars, one constructing the melody, the other fuzzing around till the final distortion that seems to ironically emphasize the four time repeated line “the distortion is way to clear”; and “Stick Figurines in Love” which has a much more complex structure, a catchy, fuzzy guitar melody and interesting chord progressions.

Then finally something to make all Pavement hardcore fans happy: stream-consciousness rambling, distorted speed-strumming, sharp breaks, loud-quiet-loud structure….  the fantastic “Spazz” couldn’t sound any more Pavement-esque!  Things slow down with the Neil Young-y “Long Hard Book” and “Share the Red”, both an example of how Malkmus can write sugary ballads without sounding banal (fans of “Major Leagues” and “Spit on a Stranger” – QRO video – you can rejoice here!)

“Tune Grief” is another song that could have easily belonged to a Pavement record: it’s pure fuzzing rock with Malkmus in a totally playful mood, which is what we love him for.  “Forever 28” is a masterpiece of pop-punk, with a combination of very catchy rhythm, crazy guitar and witty lyrics.  Definitely one of the best songs of the record.

If any complaint, Mirror Traffic would have probably benefited from being a bit shorter and ending with the sweet, folksy “All Over Gently” or “Polvo”, which surprisingly only appears as a bonus track in the Japanese edition but didn’t make it to the U.S. & U.K. releases.  The best moments of “Fall Away” are the brass arrangements and the softly sung vocal parts.  “Gorgeous Georgie” reminds of the “Craw Song” (from Pig Lib) for the melody and the nursery rhyme-like lyrics structure.

The Pavement reunion tour may have gained Malkmus new fans and reanimated the long-time ones, but with Mirror Traffic, not only has he managed to elegantly overcome the pressure he must have felt under since last year, but he also proved that after 22 years of career he can still write so many varied songs all capable of somehow touching something inside his fans.

{audio}mp3/files/Stephen Malkmus and The Jicks – No One Is As I Are Be.mp3{/audio}
Tags
Album of the WeekStephen Malkmus
Categories
Album Reviews
OLDER ARTICLE