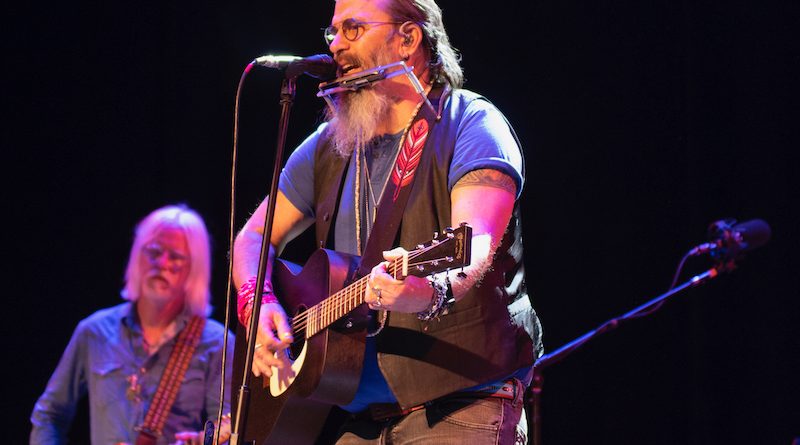 Click here for photos of Steve Earle & The Dukes from 2015 LOCKN’ Festival in Arrington, VA in the Concert Photo Gallery

A Steve Earle show is dripping with emotion and the ghosts of things gone by. Whether it’s tales of sobriety after years of abuse or stories telling of a lost son, there is heartbreak and heartache. That isn’t to say that the show is depressing, it’s anything but, only the material, when delved into deeply, reminds the listener of human fallibility and frailty. Like most traditional country and blues, Steve Earle’s songwriting is based on and forged in reality, however unpleasant or unsavory.

Over the course of thirty songs there were tales of wandering eyes and smoking guns (“Feel Alright”) followed by songs of country boredom and restlessness (“Someday”). There was “Copperhead Road”, Earle’s only Top 10 single, the performance of which was clearly a detour from the rest of the heartfelt tracks. Other highlights included covers of his late son Justin’s songs “The Saint Of Lost Causes”and “Harlem River Blues”, the former leaving the crowd weeping openly.

Musically Earle and the band were peerless, especially considering the mediocre acoustic of the venue. The keyboards were deep and bluesy but also tinkled when needed, while every snap of the high hat drove home the importance of the track.

A Steve Earle and The Dukes show is a must-see, but be warned, it isn’t for the faint of heart or the overly emotional. There will be sadness and weeping. There will also be laughs, smiles, and lots of good memories.

WE LOVE NYC: The Homecoming Recap