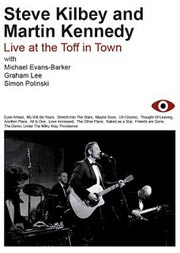 Recorded in the September of 2009 in Melbourne, the live DVD of the Australian duo, known as Steve Kilbey and Martin Kennedy, provides some consolation for the devoted fans, unable to witness the intimate performance first hand.  A prominent disco ball, hovering at the at the center edge of the stage, bounces off subtle flickering lights, nestled by drawn red velvet curtains.  The abstract images roaming on the back screen, adds to the peculiar combination of the stage decor.  Well-groomed, dressed in black tuxedoes, Kilbey and Kennedy, accompanied by Graham Lee (The Triffids) on pedal steel guitar, and Michael Evans-Baker on drums and percussion, perform songs from their debut collaboration, Unseen Music, Unseen Words, to a poised audience, seated around the candle-lit tables.

During one of his many expressions of gratitude, Kilbey (QRO interview) thanks the Lord for giving him so much f**cking talent.  Fortunately, he couldn’t be so f**king right about that!  Best known as the frontman for the endearing, and enduring neo-psychedelic/prog-space rock quartet, The Church (QRO live review), Kilbey’s musical resume would turn any veteran rocker green with envy.  Give or take 23 official full length albums with The Church, enough solo work to make an eight-CD box set, the 55-year old musician has had collaborations that you can count on more than one hand.  Kilbey is also a poet, a painter, aspiring video artist, and an actor.  But perhaps this renaissance man’s greatest skill is his hypnotic otherworldly presence that could tongue-tie any prepared journalist, and able to hold his audience in a trance, with a voice that seem to calm any fractious being.

The other half of this refined duo, Martin Kennedy, has been churning out primarily instrumental, electronic ambient music as All India Radio for the past decade.  Also an active visual artist, Kennedy is steadily building up an illustrious career of his own.  But unlike Kilbey, the Melbourne musician is a man of few words on stage.  Kennedy seems to be content, standing off to the side quietly, not missing a beat with his Destroyer guitar, and letting one of his musical idols take the spotlight.

Kilbey and Kennedy’s live performance keeps pretty faithful to the studio recording.  They manage to beautifully translate the atmospheric etherealness of the album on stage.  Opener "Eyes Ahead" lays out Kilbey and Kennedy’s palette: lo-fi electronic ambience, lush overtones, hypnotic-dreamy vocals, and frail beauty.  Oscillating between the ethereal croons of "All Is One" and "The Other Place" and half-sung seduction of "Love Increased" and "Naked As A Star", the vocals always sound perfectly paired with its musical counterpart.  Kilbey’s visceral performance gives his voice more prominence than its studio version, enhanced by the theatrical gestures of his hands.  The noticeable difference of the live set is the addition of the steel pedal guitar.  Not introduced until the eighth track, "All Is One", Lee’s weeping apparatus adds even more melancholia to already pensive compositions.  The set list is identical to the album, concluding with the delicate ballad, "Friends Are Gone", with wispy piano, and lamenting guitars gently gliding over swirling space, as Kilbey’s serene vocals soothe away all your troubles.

For the encore, the quartet treats the audience to the triad of the future, the past, and the immortal.  Upon re-entering the stage, Kilbey introduces a new song, from their forthcoming second album, due out later this year.  "The Demo" continues the subdued, mid-tempo serenade of the evening.  Kilbey’s most famous song, "Under the Milky Way", is spared down to a more blues-y, lounge-y version; yet the iconic tune retains its ominous aura.  The closer of the show, is perhaps one of the most beautiful, and pathos-inducing song, Kilbey has ever contributed to (and almost all his songs can be filed under "sadly beautiful").  Written with the late Grant McLennan of The Go-Betweens, under the moniker of Jack Frost, for their first album, "Providence", should be renowned as any Leonard Cohen ballad.

Steve Kilbey & Martin Kennedy playing "Eyes Ahead" from Live at the Toff in Town:

When you have an experience in a certain craft, say – videoing live events – you know there are limitations, unless you have the budget to make a Rolling Stones concert video.  There’s never enough light, or the lighting is uneven, and the ever-puzzling penchant for color gels in some establishments, make the task of color correcting a nightmare.  So, under the challenging circumstances, the video quality is fair.  The slow cross fades compliment the elegance of the performance.  The no-fuss style helps to highlight the musicians, rather than the video maker, which is critical, in order to be absorbed into the performance.  Unfortunately, the picture suffers from compression issue, resulting in pixilation.  Fortunately, wardrobe, music, and Kilbey’s charisma makeup for post production mishap.  In any case, aren’t you curious to see four top-notch musicians in tuxedoes, perform under a disco ball?