Stewart Copeland’s Police Deranged for Orchestra was a phenomenal experience, but one that called for a certain level of suspension of disbelief.... 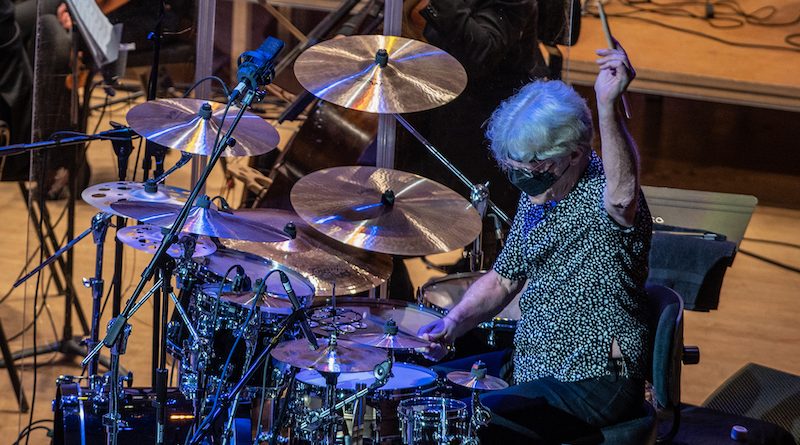 There’s a phrase; “suspension of disbelief,” which, according to the Oxford Reference, is: “The intentional avoidance of logic in examining something unreal in order to believe it, for the sake of enjoyment.” Stewart Copeland’s Police Deranged for Orchestra was a phenomenal experience, but one that called for a certain level of suspension of disbelief.

Celebrated as “one of the greatest drummers of all time” by Rolling Stone Magazine, Copeland is the cofounder of the unparalleled rock band, The Police, and now creates ground-breaking music for film, television, opera, ballet, and orchestra. On Sunday night, November 7th the Atlanta Symphony Hall was transformed into something that transcended any genre or definition. It wasn’t classical, it wasn’t rock, it wasn’t anything that could be labeled – but the combination of the orchestra, Copeland’s drums, and his hand-picked band, singers and conductor, created an alchemy of sound that bordered on magical.

The show started with “Demolition Man”. It took a moment to adjust to the symphonic accompaniment and the feminine voices of veteran background singers; Ashley Tamar, Carmel Helene and Amy Keys, replacing Sting’s legendary tenor, but Copeland’s superlative drums, along with his excellent guitarist and bassist, brought the audience back to 1981, when the song was originally released on “The Police’s” fourth album, Ghost in the Machine.

Even in his mask (which was required for both performers and audience members), you could make out his still youthful face, though his famous blonde locks were now a silvery grey. Copeland has remained charming, likeable and incredibly energetic, belying his nearly 70 years. As he announced the next song, “King of Pain”, he gave credit to his bandmate, friend and sometimes nemesis, “Stingo,” for his incredible song-writing talents, then challenged the audience to identify each newly “deranged” song, calling it a game of “hide the hits.” This song, along with all the others, comingled the familiar and the strange, in an innovative and intoxicating way that defied categorization.

“Murder By Numbers”, came next, with another glowing shoutout to the writer – this time, his other longtime colleague, Andy Summers. The combination of orchestra, guitars, vocals and Copeland’s outstanding drums came together, as all of the musicians found their groove. The audience was now “all in” with this remarkable concoction, and they repaid the players with their adulation.

“Roxanne” was next, and as Copeland put it, he really “messed this one up.” With the funky bass notes from Sabal-Lecco, and ASO’s powerful horn section, the song took on a strange, and decidedly jazzy tone. Tamar, Helene and Keys’ impeccable vocals brought it home, as the crowd jumped to their feet.

An equally interesting approach was taken for the next three numbers; the instrumental, “Equalizer”, along with “One World” and “Spirits In the Material World”, in which Copeland took a turn at the bass, allowing John Bryant of the Dallas Symphony to fill in for him on drums. He ended the first set with “Walking on the Moon”, which included a stunning drum solo, and an improvisational jam, lasing at least five minutes. Stuart Copeland’s command of his instrument on this song (and all others) is a sight (and sound) to behold, leaving no doubt that he is one of the finest drummers in the world.

After a brief intermission, the second set began with The Police’s biggest hit, “Every Breath You Take”. The strings created a beautiful backdrop for the anthem, reminiscent of the string quartet that appeared in the song’s haunting 1983 video, as the singers made lovely, otherworldly sounds between choruses, finishing the number like a gospel choir. “We are all blessed to have this wonderful orchestra,” announced Copeland, as he reminded the audience that the symphony holds performances in Atlanta throughout the year.

The concert went on, as Copeland continued to deconstruct and reconstruct each beloved hit. With every song, it was surprising (but never disappointing), to hear female vocalists and an entire orchestra perform songs that had always been played by a group of three men. The audience responded with what can only be characterized as jubilation and delight, as favorites such as “Walking in Your Footsteps”, “The Bed’s Too Big Without You” and “Don’t Stand So Close to Me” were played, with Copeland happily conducting several numbers.

Next came the elegant, “Message in a Bottle”, with a light breezy string opening, building into a booming bass, assisted by six talented celloists. Copeland’s distinctive drumming gave “Message” an air of familiarity, which the audience responded to with its first standing ovation of the evening.

Copeland and Company ended the set with one of the concert’s strongest performances, “I Can’t Stand Losing You”, featuring an audience “call and response” to the lyrics, big drums, and strings that spiraled down into the final crescendo. The crowd once again were compelled to their feet by the music, staying there for the concert’s second ovation.

As the ovation continued, the fans were rewarded when Copeland and team returned to the stage for an encore. As “Every Little Thing She Does is Magic” began to play, the crowd was the most animated and elated they had been all night. A group of people, of all ages and walks of life, loosened up and let themselves go, dancing and enjoying the music with abandon. When Copeland, his band, and the orchestra took their final bow, everyone in attendance understood they had experienced a singular and sublime event.

Set 1:
Demolition Man
King of Pain
Murder by Numbers
Roxanne
One World
Spirits in the Material World
The Equalizer, Busy Equalizing
Walking on the Moon

Set 2:
Every Breath You Take
Walking In Your Footsteps
The Bed’s Too Big Without You
Don’t Stand So Close to Me
Message in a Bottle
I Can’t Stand Losing You

Encore:
Every Little Thing She Does is Magic

The War On Drugs – I Don’t Live Here Anymore