Still Flyin’ : On a Bedroom Wall 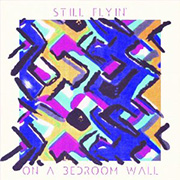 Still Flyin’s sophomore album finds band-leader Sean Rawls skulking away from the raucous international house-party of their first release and heading with a couple of friends to a down-tempo club in search of more mature fun.  It’s a move that seems appropriate given Rawls’ increasing age and the band’s long history, having formed in 2004.  What this shift means in concrete terms is an album of pared-back electro-pop, light on vocal hooks but demonstrating a tasteful restraint that was lacking in their previous work.  As a result however Still Flyin’ have lost some of the youthful exuberance that made their first album a joy (despite its flaws) and their live shows so exhilarating.

Tight guitar work remains a staple of the group’s sound but its been garnished here with synth flourishes and solid beat work that share some similarities with Cut Copy’s (QRO live review) output.  Group sing-alongs like "Good Thing It’s a Ghost Town Around Here" have been dispensed with, the focus almost exclusively now on Rawl’s vocals.  Disappointingly, he’s revealed to be an unremarkable lead singer, his limited range preventing these tracks from escaping orbit.  Choruses like, "You are a new storm chaser / You are a candle maker / Goodbye to life complacent / If you can’t see life than make it," point to an almost surreal banality in Rawls’ lyricism which further detracts from the album.

Though these issues are pervasive, they’re in no way offensive and there’s still plenty of fun to be had.  "Travelin’ Man"’s instrumentation has a peppy optimism lacking in its wistful lyrics which make it a fine single and "Cleat Talking" does a great approximation of an Architecture in Helsinki (QRO live review) track (reflecting their shared history).  "Surrender to Me"’s disco-inclination is synthily attractive and "Jacket in July", with its steady build and rock-solid groove, makes a nice track to conclude on.  Taken in whole the new direction largely works and this album, for its disappointments, makes it clear that though the party might be over, the night is still young.

MP3 Stream: "Surrender To Me"