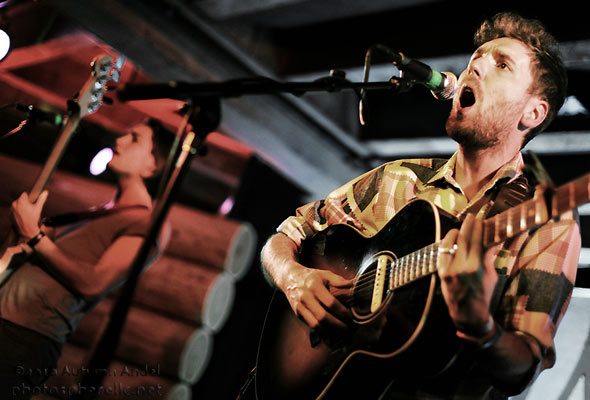 Click here for photos of Stornoway at 2010 Haldern Pop Music Festival in Rees-Haldern, Germany in the QRO Concert Photo Gallery

Click here for photos of Stornoway at 2010 Truck Festival in Steventon, U.K. in the QRO Concert Photo Gallery

upside-down from the drum kit for the opening ballad, "I Saw You Blink".  The voluminous crowd welcomed the lively British band as though they were locals.  And the band welcomed Portland’s allowance to drink beer on stage (unlike Seattle), even if they barely touched their bottles. 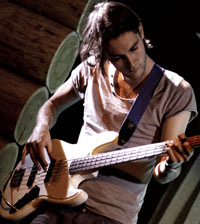 The vocalist, Brian Briggs, warbled along euphoniously, gently roving through the colorful musical terrain that supported – and often harmonized – with him.  The stoic and tense frontman was complimented by his bassist, Olli Steadman, whose supple movements and frequent smiles gave an airiness to both the intensity of Briggs and the unerring focus of Briggs’ right-hand man, Jonathan Ouin.  Though quite serious to look at, Briggs humored the crowd with a few quips in between pensive lyrics.  He spoke, for instance, of the world’s smallest park, Mill Ends Park, here in Portland which led to the topic of snail-racing and Archie, the fastest snail, 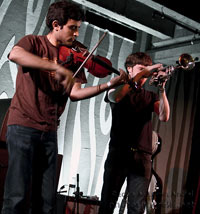 of whom he seemed fond. 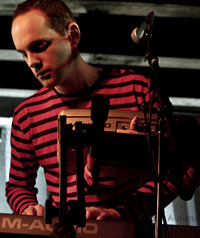 Fortunately, the band was anything but small or snail paced.  They varied their set with supporting musicians providing added percussion, trumpet and the violin.  The violin solo intro to "The Coldharbour Road" was stunning, shrieking to a delay and looping melodies as the embellishments provided a smooth segue to the full band 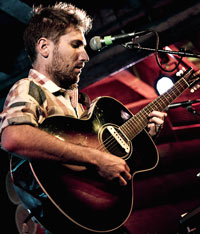 chiming in with Arcadian flair.

They were charismatic and multi-faceted; their only weakness a 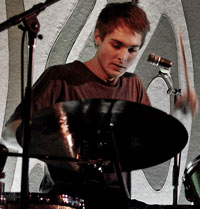 lack of a more commanding voice.  Could they shed a certain restraint they would bring a charming evening into a compelling one.  Stornoway returned for an acoustic encore.  It was a fetching intimacy that they rightfully earned.  They were appreciative of the welcoming audience and casually flitted off into the stormy night so to continue traveling on. 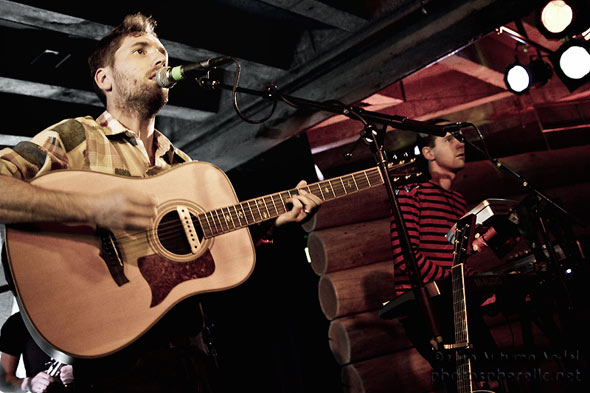 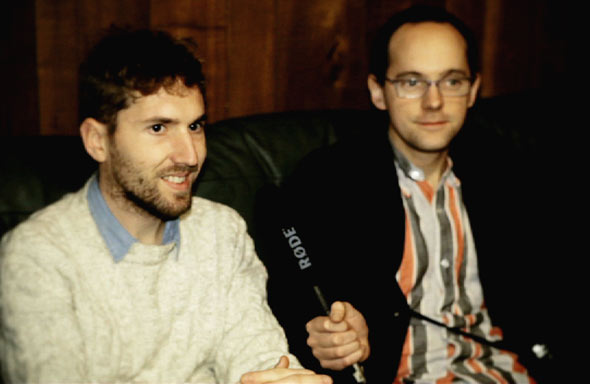 Stornoway arrived to Portland on one of the rainiest days of the season.  The moody blanket of stony clouds and ephemeral daylight hours somehow suited their generally introspective, pastoral songs.  The Oxford quartet has only one album (Beachcomber’s Windowsill) under their belt, but their recorded and live craftsmanship are years beyond their fresh faces.  If the renowned 4D record label snatched up the English band after releasing just two singles, you know they are something special. 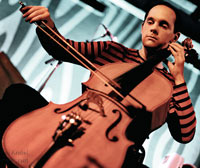 Steeped in folk tradition, Stornoway treated the audience to a variety of instruments: trumpet, violin, and even a keg made a guest appearance on stage.  Jonathan Ouin brought out the cello for ONE song ("The End of The Movie").  He also used the banjo only once, but there’s something endearing about lugging a big instrument like a cello – just to play a single track.  Frontman Brian Briggs did his best to connect with the audience.  Speaking in a deadpan manner may have been nerves, but it proved to be a good comic relief, in his polite English enunciation.  Briggs had everyone cracking up whether commenting about Oregon – the only state to have a state nut (hazelnut), River Thames voted to be the worst river in Britain, or snail racing.

Before playing to a convivial Friday night crowd on December 10th, Brian and Jon sat down with us for a brief interview in the green room of Doug Fir Lounge, while Ollie Steadman (bass) and his brother Rob (drums), conducted sound check.  Surprisingly, Brian was much more relaxed during the interview with plenty of understated humor – even if it wasn’t always "savory".  In his very British manner, Jon offered me a cup of tea – the first and probably the last time from an interviewee.

QRO: How does the songwriting process come about for you guys?

Brian Briggs: When we write songs, it begins with a very basic demo of acoustic guitar and voice, which I would put together in my bedroom – using a sort of, little digital recorder.  And then, that would go to Jon and the band, and then we’d start to arrange them.  Arrange the songs, using whatever instruments just seem suitable for the style of the song.  We normally end up recording the song in the same way – just by – you know, trying lots of different instruments out, and trying different arrangements – using this home digital studio thing.  At the end of it all, there comes out a song.

QRO: Does the lyrics come after the music?

QRO: You guys use some unconventional instruments – like a cutting board – what other uncommon objects, or methods have you employed to make music?

Jonathan Ouin: We’ve tried using anything we can find.  Things like – carrots, bits of culinary dishes, and matches – and footsteps.  Because they make for more slightly unusual percussive set than your average – but we just use whatever we can find.

BB: Plus the occasional bit of field recording of – passing dogs, or birds, or conversations – thunderstorms.

QRO: I thought I heard on one of your songs – a sound that’s made with paper over comb?

That’s probably the kazoo – the more professional version of paper over the comb.

JO: We should try that one next time.

BB: That’s on the song called "Watching Birds" – at the end – a kazoo solo.  Probably not something we’ll do it again.

QRO: What do you think about music videos, and do you have any say on the concepts?

JO: We’ve done a succession of about four or five videos now, and they’re all quite different to each other.  I think some have been more successful than others.  I won’t say which, but I definitely prefer some to others.  Our latest one ("Watching Birds"), we enjoyed making a lot.  It was with a director called James Caddick, and involved a sport called chess boxing.  It involved Brian fighting Ollie, our bass guitarist, and Brian getting beaten up.  It’s quite traumatic – especially for Brian.

QRO: Who decided that you (Brian) should get beaten up?

BB: The rest of the band.  Pretty unanimous – to be honest.

QRO: What has been the biggest culture shock while touring?

BB: Hmm – the biggest culture shock of our touring – so far we’ve been to North America, obviously – to different parts of Europe and to Ireland.  I think probably going to Latvia.  It was the most different from what we were used to.  We were playing a gig on a beach, by the Baltic Sea with these clearings and pine forests, and lots of beautiful tanned people.  And that was nice.

JO: Really?  They were tanned?

JO: The sea was brown, incidentally – but I liked it.

QRO: Is there a country you’d really like to go play?

BB: That would be good.

QRO: You (Jon) have a PhD in Russian Lit, right?

QRO: Have you been to Russia?

QRO: What do you miss the most when you’re on tour?

[Jon and Brian both laugh]

BB: I miss getting out to the countryside.  On this tour, we’ve been to city to city, and we often spend six hours in the city – before leaving again.  And we don’t really get a chance to stop, because it’s such long distances in US.  So we’ve been driving through this amazing countryside, lots of coniferous forests, see the lakes and mountains, but not really getting out to experience it.  So I miss that.

QRO: Do you have day jobs?  Do you do something outside of the band to make an income?

BB: We both had day jobs, until recently – until earlier this year when the band is basically kind of – taken over our lives.  I used to be working with snakes in Wiltshire County in England.  So now my hobby and my work have swapped roles.

QRO: You (Brian) have a degree in – duck ecology?

BB: I have a degree in ornithology.  Particularly, I studied ducks in southwest London.  Very glamorous.

QRO: What would be the most interesting fact about ducks that people wouldn’t know?

BB: Well, the first thing that comes to mind is not that – sort of savory, but – it’s that, female mallards have two vaginas.  Because they have evolved to – you know – um, basically get around the fact that they get raped all the time.

[look at each other and laughs]

JO: What do you think of that?

BB: And the males have – curly willies.

QRO: So are you happy now that this band is your full time job?

JO: It’s awful!  Let me tell you. [shakes his head and rolls eyes back] Need to escape!

BB: Last night, we found ourselves in a hotel with a hot tub.

So we were in the tub, drinking ‘til small hours, thinking what a hard life it is – being in a band.

QRO: If you could have anything on your rider, what would it be?

BB: I think our opinions differ because amongst my top favorites for the rider is gherkins, and I know that Jon would not follow that.

JO: I think Brian should have his separate room full of gherkins.  And be forced to lie in it.  Be smothered in gherkins.

BB: [laughs] Because you’re bored with the rest of us.

QRO: What music are you listening to at the moment?

BB: I bought some CDs the other day, which I’m looking forward to.  One is the Beta Band album, one is an old Paul Simon CD, and one is fairly new live album by Tom Waits.  And I am looking forward to all those because I am a fan of those acts.

QRO: Women?  Where are they from?

JO: I’ve got no idea, actually.

QRO: Are they made of men?

JO: Intriguingly sound like they’re men, but I’m not sure.

[editor’s note: Women are from Vancouver, just to the north, and are comprised entirely of men]

JO: So confusing these days.

QRO: They think they’re being clever but…

QRO: Have any new material in the works?

BB: Lots, but it’s quite a long way from being ready for a performance, but we’ve got lots of sketches.

QRO: Could you sing couple of lines for us?

JO: Haven’t worked out the beat or backing vocals or anything, but working on it.

QRO: So you’ve guys have never been to Portland before, and I’ve heard that you guys are big beer fans.

BB: Yeah, we’ve got some nice looking beer on our rider, which I think is from a local brewery.

QRO: You are aware that we have the most breweries per capita in U.S.?

BB: Yeah, I’ve heard that folks of Portland are very into their beers, and that, they love the microbreweries, and don’t mind about the taste, as long as it got a nice label on the bottle.

QRO: So have you tried any yet?

BB: We had a couple in Seattle, but we haven’t tried any Portland beers yet.

QRO: Well, next time, we’ll have to take you on a brewery tour.

BB: That would be great.

QRO: What’s in the future?

Well, we’ve been touring hell of a lot this year so we’re really looking forward to having a bit of time to work on new songs on another album.

We’re also doing more touring next year.  One thing we are excited about is the trip to the other side of the world – Australia, for something called Laneway Festival, which is a touring festival.

That’s going to be exciting, and it will also be nice and hot, because we’re leaving in about two months time, in the middle of British winter and going straight to Australian summer.  So, that would be nice!

QRO: That’s a good deal.  How many cities is that?

BB: I think about seven different cities, and we’re playing about nine gigs.

QRO: Thank you very much for the interview!

BB: Thank you for your promotion.