While they were in New York for the New Colossus Festival, Paris’ Stuck In the Sound talked with QRO.... 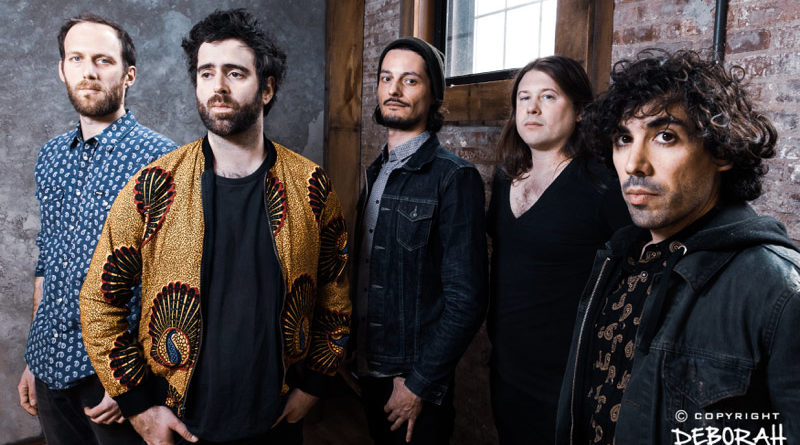 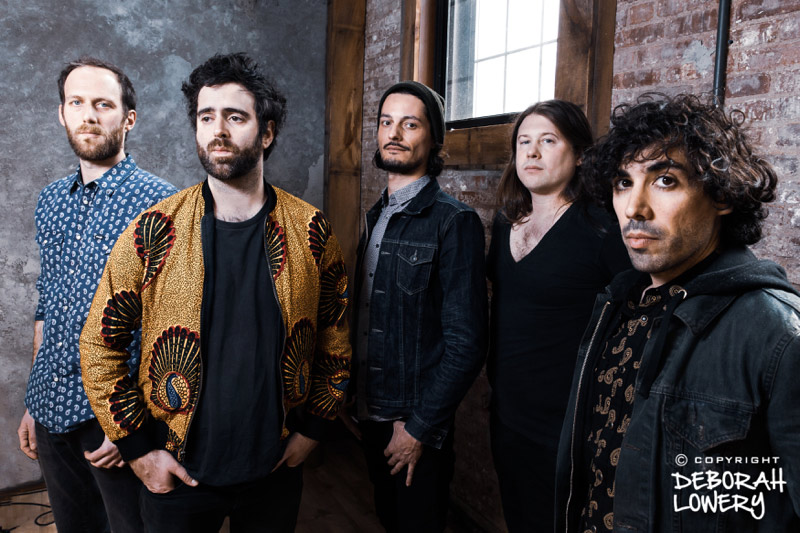 While they were in New York for the New Colossus Festival, Paris’ Stuck In the Sound talked with QRO. In the conversation, Emmanuel Barichasse (guitar), François Ernie (drums), and José Reis Fontão (vocals/guitar) discussed their new album, Billy Believe, making it on and off over two years in their Parisian home studio, doing songs in English (with a French accent), how they all met, their Zooropa, eighties are back, and more…

QRO: Why don’t you guys tell me about the new album coming out? You had two singles already, and…

François Ernie: Yes, and the whole album was released on March 1st and we’re very happy. It’s our fifth album, and we’re very glad to show it to the world.

José Fontão: We are really excited.

QRO: What’s gone into the making of this album, it sounds like a lot of time has passed…

FE: Yeah, yeah, it was. Actually, we’ve got our own studio in Paris, where we are rehearsing, composing and recording all of our albums, and this one was completely recorded in our studio so we spent, like, months on it.

QRO: Two years in the making.

QRO: All in one go? Or do you have spurts of songwriting?

JF: The writing was pretty easy.

FE: Yeah, the writing was pretty easy, but sometime we were working for like two weeks, and then not working and then two weeks again… And you know, some of the tracks were recorded, like, two days before the end of the making of the album and some were recorded like two years before, you know, so since we’ve got our own place we don’t have to compact it to one time.

QRO: It sounds like such a good way to let it grow… organically over time.

FE: Yeah, yeah, exactly, and also some of the tracks we kind of took to the side and then we remembered them, and maybe one week before the end of the record we were like, “Oh but we’ve got this track – let’s listen to it again, oh my god it’s great, so let’s put it on the album.”

Some of the tracks were recorded, like, two days before the end of the making of the album and some were recorded like two years before.

QRO: Did you play any of these songs live at gigs before you recorded them?

FE: No, three. Three of them were played before recording.

QRO: So you were testing them a little bit?

QRO: Does that help you decide, ‘We’ll go ahead and put it on the album?’

JF: No, not really. We decide when we love a song that we write, we put it on the record.

FE: One thing that’s nice with having our own studio is that sometimes, we can – we record all the time. When we are rehearsing, we record, so sometimes we have songs recorded in the making as we’re composing them. And for some of the tracks, we kept this, first track of the song.

QRO: That’s so cool. So you might even have pieces from different days when you’re just riffing on something… and a piece from another day, and you can connect them later?

One thing that’s nice with having our own studio is that sometimes, we can – we record all the time.

QRO: You’re writing process – Your songs are in English… that must be difficult…

JF: No, it’s not difficult. We listen to English music, so – you’re talking about the language?

QRO: Yes, because, living in France myself, even feeling pretty fluent, I remember at the time feeling very much like I wasn’t very funny in French, because I couldn’t really show my personality because even though I knew how to communicate, it wasn’t easy to be my true self in a different language. So, in songwriting…

JF: It’s not the same thing. You know I’m Portuguese, so I know three languages, four, five, but you know English is the best language for the kind of music we play.

FE: Exactly. All of our musical influences for the band are English-speaking artists, so it would seem strange to sing this sort of music in French. We’ve tried it, but it doesn’t sound the same, and so that’s why we decided to stick with the English language because it’s a sort of globalized style of music.

JF: And for me, the sense of a word would be explained by the way that I’m going to sing it – it’s not the word that’s important, it’s the way I sing the word.

QRO: That’s an incredible talent, to be able to compose in your head in a completely different language!

JF: Did you listen to our music; did you notice a French accent when I sing in English?

JF: There is a French accent?!

QRO: Yeah, I think people usually think it’s pretty cute when you speak their language in a unique accent. Yeah – and I can remember growing up, singing along to some of my favorite songs in British English and suddenly I’ve got a British accent!

All of our musical influences for the band are English-speaking artists, so it would seem strange to sing this sort of music in French.

QRO: So… You guys have been together a long time…

QRO: And you’re all from Paris? How did you meet?

FE: We met by common friends. You met the bass player, Arno [Bordas], at…

FE: And Romain [Della Valle] is a long friend of Arno, so…

QRO: Were you friends who just started to play or were you looking for bandmates?

Stuck In the Sound playing “See You Again” live at YouTube Space in New York, NY:

QRO: Ok so back to the new album, so what songs today are you planning on recording acoustically here at the YouTube Space?

QRO: What made you choose those songs to record acoustically?

JF: It’s because they’re not “rock” like heavy, so it was easy to transform the song in acoustic…

FE: …Some of the more pop songs that work with the acoustic guitar… Some of the stuff we play is like, indie, and it doesn’t work…

QRO: Do you want to talk about the origin of each of these songs? Where you had the idea for the story of this song?

JF: I don’t remember the origin, it was just happiness, to play together in the same room.

FE: “See You Again” was written like, a kind of long time ago, one of the first ones we wrote for the new album. It was in the summer, I guess, and you can hear it in the song… It’s being in love, with somebody you wish to see again, as the lyrics say…but instead of that you get drunk and drink… It’s always about love, anyway.

And for the second track, “Break Up”, was on the contrary one of the last we wrote for the album, so it was written like, maybe six months ago?

JF: And it’s about love.

FE: And it’s about breaking up!

QRO: Not about the same person, I hope?

Emmanuel Barichasse: It’s one of the songs we recorded live…

FE: As we were composing it… We were recording it…. We loved the sound, so…

We worked this album all together, in the same room.

QRO: When you’re composing, are you working together, or one person has the lyrics one time, and then…

JF: Yes, we worked this album all together, in the same room.

FE: Yeah, the music was really composed all together on this album, it’s like we were just uh, jamming in a way, but since we always record what we play… that’s how we build the tracks

QRO: Do you have producers that help with the finished product?

FE: Three were mixed by Romain and one was mixed by Arno.

QRO: Is that a departure from your previous albums? Is this a new producer?

FE: No, actually Frederic also mixed our previous album, the one just before this one. And Arno and Roman, who are also sound engineers, worked on every one of the albums.

QRO: That’s amazing! To be able to have your hands in every step of the production from the writing to the musicianship, to the production… It’s really the artist’s work – because today production is really such a part of the work

FE: Yeah, we love it. It’s sort of the craftsmanship of the whole thing… We love it.

Our previous album was kind of a step apart from the rest of our discography, but this one we’re really coming back to the DNA of the band.

JF: It reminds me some of the first album…it’s a mix between the first, the second…

FE: Actually, our previous album was kind of a step apart from the rest of our discography, but this one we’re really coming back to the DNA of the band.

JF: Yeah, I feel the same way about it.

QRO: And yet, it must have evolved… Of course you grow, and that was so long ago…

FE: …But it reminds us of the first album, this song or that song, and some of the people who know the band for a long time they tell us… comment dire… vous retrouvez…

FE: Yeah, they’re finding it again, what they loved about the band from previous albums.

QRO: That’s not a response to people’s reaction to your last album, no?

QRO: I mean, U2 did this…everyone hated Zooropa, right?

JE: Yeah! Zooropa from U2, exactly, yeah it was our Zooropa, exactly – that’s the same!

FE: Yeah but, it’s interesting because, you want, you’re looking for artistic freedom, and you say, ‘Okay, we can do whatever we want, any style we want,’ and we really tried something different which was interesting, but then the fans and us, as we had to play them live, maybe we found that this was not really the music we wanted to play, so we went back to our previous style.

QRO: Or maybe it was just ahead of its time. I mean, thinking about Zooropa, still not my favorite album, but at the time it was just weird and now it fits in more with the return to pop-y-ness…

QRO: Ok so I’m glad to hear you’ve put this out, have you played much of this live?

FE: …Since the album has been out.

QRO: That’s so exciting… Where is the first show?

QRO: It’s a very small space, have you seen it?

Both: Yeah – we were there last night!

QRO: Really? I was shooting there, and I did think I heard some French…

QRO: [laughs] Yeah, I noticed because you were so kind and encouraging to the other bands so I thought you weren’t from New York, I mean people from New York are a little more like, ‘Yeah, it’s cool…’

FE: Maybe we were drunk also…

JF: We were so drunk.

QRO: Uh, yes, I remember… That’s a Paris thing… I remember people reacting to my teeth because…

JF: They are not used to people smiling and being open…

QRO: Well, tonight maybe you’ll enjoy an American audience that is less aloof and more embracing and excited about the new music, sounds like it’s gonna be…

FE: Quick… We’re playing just once, but from there we are heading to South by Southwest and we’re gonna play like three or four times.

QRO: Well don’t hold out on us here in New York, I mean I’m sure it’s a short set.

FE: Half an hour maybe.

QRO: Well, good luck, and maybe you’ll return to New York and be at Terminal 5 (QRO venue review) or something…

JF: Thank you… Yeah, that would be great!