From Styx, there was nearly ninety minutes of solid performance from the band that has been doing this since 1972 in one iteration or another.... 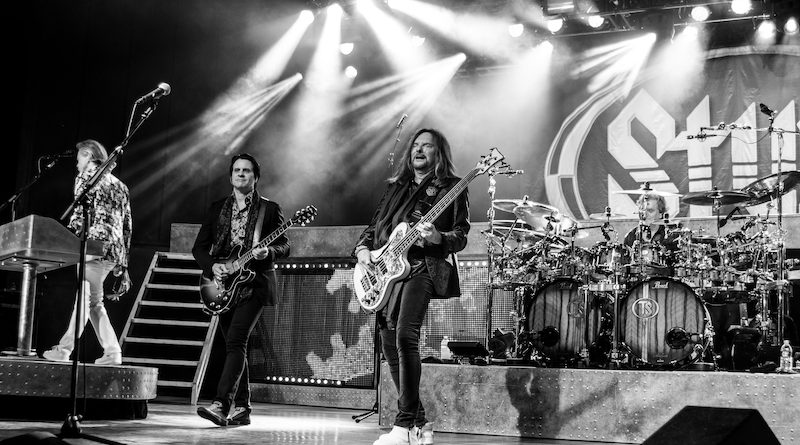 Click here for QRO’s review of Styx at Sprint Pavilion in Charlottesville, VA on September 20th, 2016

Click here for photos of Styx at Verizon Wireless Amphitheater in Atlanta, GA on May 15th, 2016 in the QRO Concert Photo Gallery

Click here for photos of Styx at AT&T Center in San Antonio, TX on February 27th, 2015 in the QRO Concert Photo Gallery

Click here for photos of Styx at Santa Barbara Bowl in Santa Barbara, CA on July 27th, 2014 in the QRO Concert Photo Gallery

Click here for photos of Styx at ACL Live at The Moody Theater in Austin, TX on November 11th, 2012 in the QRO Concert Photo Gallery

The usual chatter at a Styx show revolves around lamenting the absence of Dennis DeYoung, the band’s founding singer and keyboard player. Following the February 19th, Saturday night’s stellar performance at the newly refurbished Pompano Beach Amphitheater in Pompano Beach, Florida, there was no such lamentation.

There was, however, nearly ninety minutes of solid performance from the band that has been doing this since 1972 in one iteration or another, this latest tour marking the release of Crash of the Crown, their sixteenth studio effort and a return to their more progressive origins.

The wide stage was bookended by Lawrence Gowan on keys and vocals on one side while Tommy Shaw, still with the long, flowing locks held down the guitar and vocals from the other side. The former playing on a piano mounted atop a turntable was masterful not only with his command of the instrument but with his skill in working a crowd as he pranced and sang just feet from an adoring crowd. The latter was exquisite in his shredding of his Fender guitar, also loving the adulation and returning the love by playing to the crowd. Center stage was the territory of original member James Young on guitar, bassists Chuck Panozzo and Ricky Phillips, drummer Todd Sucherman, and guitarist Will Evankovich.

The setlist was long and varied with all the hits getting served up hot and fresh along with deeper tracks and new material off of the newest release. The playing was tight and well-scripted with soaring highs carried on the grooving bass line. There were harmonies aplenty and of course there were syrupy melodies, lots of melodies that one would expect.

Opening act Don Felder, he of Eagles game, was stunning in his performance of an hour’s worth of Eagles hits as well as a few solo tracks.

This was vintage live Styx with hardly an update needed. The new album is also vintage Styx, no updating needed. Now, Dennis isn’t coming back, ever. Accept it and move on.