Indie auteur Sufjan Stevens came up making intricate folk about Midwestern states, but has since grown to do many things.... 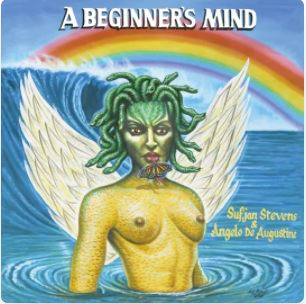 Indie auteur Sufjan Stevens came up making intricate folk about Midwestern states, but has since grown to do many things, from his own beautiful folk to a more electronic side, not to mention working with others, like an album about the planets with The National’s Bryce Dessner & more, Planetarium (QRO review). His most recent record with his own name on it was last year’s The Ascension (QRO review), where he again brought back his electronica that is well-done, but not quite what you were looking for from the guy you learned not to call “Surfjan.” Now he collaborates with indie-folk friend Angelo De Augustine for the very natural, and intimate, A Beginner’s Mind.

Apparently, each song is inspired by a movie that the pair watched when making that piece, but you wouldn’t know it, certainly not the individual movies, save perhaps for the title or the album’s Wikipedia page. Mind has that airy, touching alt-folk that Stevens does so well, such as the bright “Lady Macbeth In Chains”, or the beautiful pitch-perfect harmonies of “Olympus” and “(This Is) The Thing”. There is even charm with “Cimmerian Shade”, and a chill groove to “Back To Oz”.

Not every piece on Beginner’s Mind is as memorable, and the fourteen tracks probably could have been cut down a bit, the album verging on beauty overload. But it is very beautiful.