<img src="http://www.qromag.com/wp-content/uploads/2009/10/surfjanstevensoct5.jpg" alt=" " />While the Bowery giveth & taketh away, Sufjan Stevens was on fine form when he played his second night in the intimate setting. ... 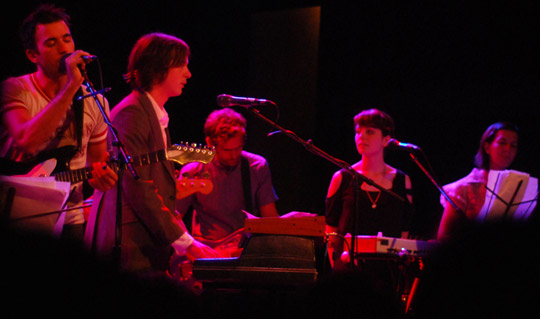 When an established, successful artist plays a small-for-him venue, there are distinct pluses – and minuses.  That’s only exacerbated if the artist hasn’t been on tour for a while, is playing multiple dates in a row in the same city, and has an ultra-loyal fanbase who might not go to a lot of other concerts – all of which were true when Sufjan Stevens played New York’s Bowery Ballroom on Monday, October 5th.  The second of two nights in a row there, Stevens (last seen on his own in New York on tour two or three years ago, in the much larger Town Hall) follows that up with back-to-back nights at Bowery’s twin-sister venue across the East River, Music Hall in Williamsburg (QRO concert listing).  Though the setting brought with it its own ups & downs, you couldn’t say Stevens wasn’t on fine form.

Bowery Ballroom (QRO venue review), on the other hand, wasn’t.  All the tickets were will call, to prevent scalping, but that also meant that everyone attending was going to have to have their name checked at the door, so Bowery divided it up – A-M through the regular entrance, downstairs to the right, N-Z through the left side (also guest list to the left, though with everything being will call, you might not have known which list you were on).  This held up fine at the start of the evening, but by the time opener Cryptacize (QRO photos) was finishing, the right, A-M entrance had a huge line where no one was being let in – though guest list and N-Z were being let in at the left entrance. 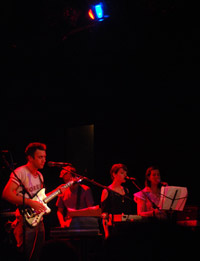 Oh, and there also was some sort of massive spill on the stairs that lead from the downstairs bar (where either entrance let you into), past the merch table, and comes out at the back of the stage floor.  Security & staff had to block both ends of the staircase (and the floor of the downstairs bar, near the stairs, was matted with flattened cardboard boxes, so you weren’t stepping directly in puddle when you entered), which meant that everyone had to go up the much smaller staircase just past the women’s bathroom on the downstairs/bar level, which lets out to immediate house right of the stage on the stage floor level.  That staircase also continues up, first to the stage itself, and then to the backstage – Bowery’s signature older, white-haired bouncer (who looks like the stereotype of a roadie), manning the stairwell in front of the flight of stairs that went up to the stage/backstage, was getting very annoyed, as many people either tried to go up/back further, or just didn’t know this was the level that they were supposed to get off at. 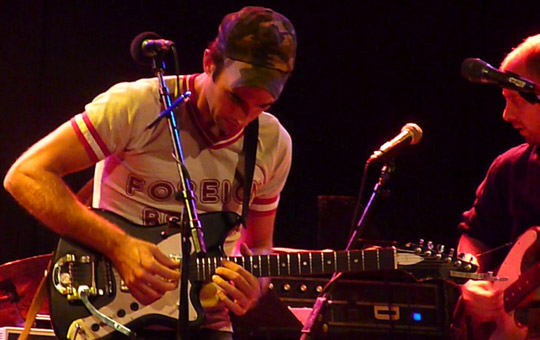 So many people at the show didn’t know because so many weren’t ‘Bowery regulars’.  Pretty much the most popular indie music club in New York for many years now, that night Bowery was filled with older types and/or people who just don’t go to that many shows.  Sufjan Stevens’ complicated, intellectual, ambitious alt-folk naturally draws that kind of crowd, but it’s a crowd better served for (and by) Town Hall (QRO venue review) – a larger, classier Midtown venue that’s also a seated venue.  Instead at Bowery, the sold-out crowd was standing, packed to the gills – and extremely attentive.  Stevens’ many stripped, ultra-touching, ultra-quiet songs meant that these fans were not only prepared for absolute crowd silence during a song, but expected it.  It was stark right from the get-go with opener “The Mistress Witch From McClure (Or, The Mind That Knows Itself)”, where only a French horn accompanied Stevens – and anyone making even the slightest peep got shushed like the end of a Simpsons episode. 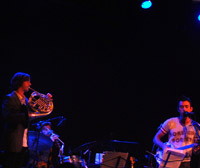 However, that piece (from 2006’s The Avalanche, b-sides & outtakes from 2005’s Illinois) wasn’t wholly representative of the night – especially of Stevens’ new songs.  Following “Mistress”, Stevens told the crowd that he & his band were using this tour to road test some new material, and launched into the new “Impossible Soul”.  The growing, enchanting & interesting song featured an almost blues-y guitar solo-breakdown, plus some weird tech moments.  The night closed with another big, new song, “There’s Too Much Love”, which had strong bright-collective moments, but also inferior weird tech-horn ones.  Those weird tech moments aren’t polished – live, anyway – and that was clear on the new “Age of Adz”, which had too much weird echo-tech-noise (after it, Stevens sheepishly said he “just wrote it this morning and wanted to share it…”).  “All Delighted People” was the only new song that favored the ‘sounds of silence’ – seriously favored, as not only did Stevens’ voice feel like the third Simon & Garfunkel, but he even borrowed/stole the iconic “Sounds of Silence” line, “Hello darkness, my old friend…”!

But while the sneak preview of new material was nice, you came to see Stevens’ classics in a more intimate setting.  The set was roughly divided between new, Illinois, and 2004’s Seven Swans (recently done, in full, upstate at ATP NY – QRO Festival Guide), though it definitely felt like more of an ‘Illinois’ night, partly due to their being one song more from Illinois than Swans on the set list (QRO photo – and Stevens skipped an additional Illinois piece, “John Wayne Gacy, Jr.”), that “Mistress” was an Illinois outtake, that the songs from that album dedicated to the state naturally have names/lyrics in common, and that Swans’, “All the Trees of the Field Will Clap Their Hands”, “Size Too Small” and “The Dress Looks Nice On You” were bunched together in the beginning/middle. 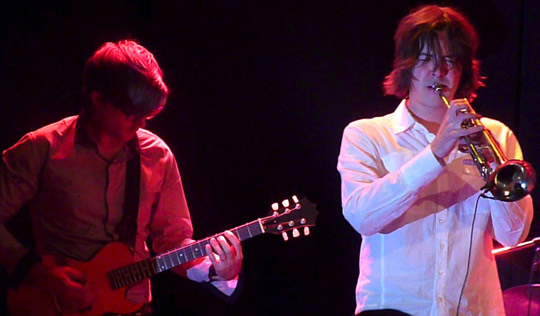 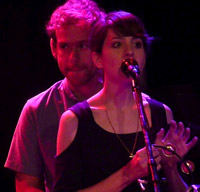 Besides, when you play songs like “Come On! Feel the Illinoise!” & “Casimir Pulaski Day” back-to-back, how can those not be standouts?  The bright, horn-led “Illinoise” lifted all spirits, even if the horns weren’t loud enough, but Stevens was more than ably assisted on vocals with back-ups from Rosie Thomas & Cryptacize’s Nedelle Torrisi (and, on guitar for that song & a few others, Bryce Dessner of The National – QRO live review).  There was a juxtaposing “Casimir” effect right after, stripped & heartbreaking, as the audience held their collective breath, so as to not miss a note.  A few 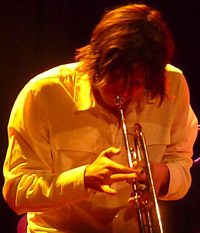 songs before the encore break, Stevens told the crowd, “We just have some civic songs to play for you…”, and then entered into “Detroit, Lift Up Your Weary Head! (Rebuild! Restore! Reconsider!)”, from 2003’s Michigan (his other ‘states project’ album, along with Illinois – Stevens has claimed that he’s going to make a record for all fifty, but there’s only been two).  Stevens joked after the bright, well appreciated “Detroit”, “I know that’s a long song, with a lot of strange, West Coast jazz, which is what I think Detroit needs right now…”  The Illinois cities of “Jacksonville” and (after the encore break) “Chicago” then followed – auto industry, Olympics: who needs ‘em?… 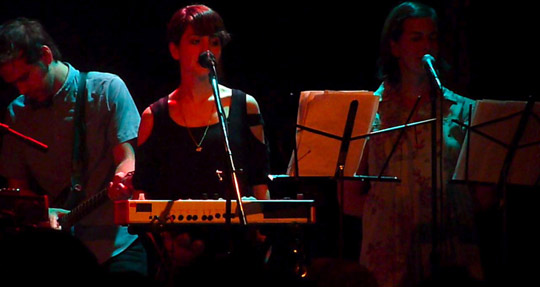 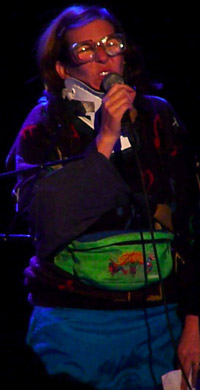 Before Stevens & co. returned to the stage with “Chicago”, Rosie Thomas came out as her alter-ego ‘Sheila Saputo’, a glasses-and-neckbrace-wearing Sufjan Stevens superfan, who recited a poem she wrote, with lines like, “You had me at, ‘Who are you & how the hell did you get in here?!?’”.  Between “Casimir” & “All Delighted People”, Stevens told the audience, “That was called ‘Casimir Pulaski Day’, by Sufjan Stevens.  We’re going to try a new one now.  It’s kind of long, so feel free to go to the bar for a drink…”  If only you could have – not only was Bowery so crowded that, to get a drink, you had to be standing at the bar for the whole show (and thus behind many people who were either taller than you or, if you were upstairs, just blocking your angle completely), but people there gave you a look if you made any noise, like asking for a drink, pouring a drink (even the bartenders were intimidated…), taking a photo (was literally asked if the sound of the shutter could be muted!), inhaling too loudly, exhaling at all, etc.  At least the bars at Music Hall in Williamsburg (QRO venue review) are farther removed from the crowd area, behind semi-walls.

But whatever you thought of the crowd and/or the venue (thank goodness the spill at Bowery happened on the second of two nights there – though you’d have thought the place would have gotten their dual lists & entrances act together by the second night), you were there for Sufjan Stevens.  And even if you were squeezed, shushed, too far away, blocked and/or (horror of horrors) sober, one got to see a special & fun show from a special & fun artist. 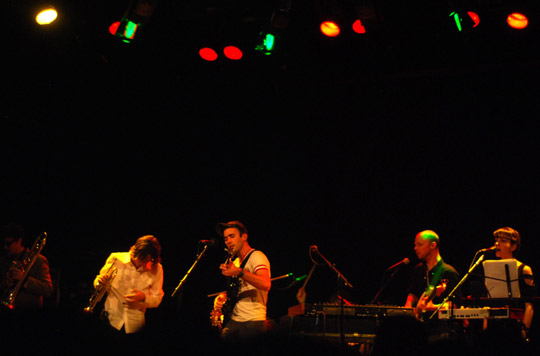