<img src="http://www.qromag.com/wp-content/uploads/2010/11/sufjanstevenstheageofadz.jpg" alt=" " />Can indie-beauty join with the tech-stop beast of electronics?  If anybody can do it, it's Sufjan Stevens. ... 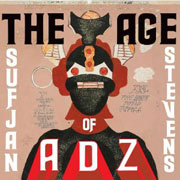 Can indie-beauty join with the tech-stop beast of electronics?  Detroit-by-way-of-Brooklyn musician Sufjan Stevens has always been idiosyncratic, from his ‘states project’ of making albums about all fifty members of the Union (though got no farther than Illinois & Michigan) to his professed Christianity (always a rarity in the indiesphere – and it inspired his Songs For Christmas); this is the man who created a music & film journey of the Brooklyn-Queens Expressway for the Brooklyn Academy of Music.  So when Stevens finally put out his first regular full-length since 2005’s Illinois, he would probably be the person best suited to combine the two far differing strains of harmony & tech-stop.  The Age of Adz succeeds with respect to its challenge, but did Stevens need to challenge himself that much?

While Sufjan Stevens is certainly best known for the beautiful harmonies of Illinois and other works, he did start in electronica with 2000 debut A Sun Came, before embarking on the states project.  Still, there was really no way that The Age of Adz couldn’t come as a shock – after the sixties choral enchantment of opener "Futile Devices" (which would have fit within previous Stevens work), Stevens marries those harmonies that he’s done so well to a tech-stop that’s too low-tech for electronica, but not hard-hitting enough for industrial, on "Too Much".  Certainly interesting and attention-grabbing, but does it work as music?  On songs like "Too Much" and the following title track & somber "I Walked", yes it does; on the subsequent "Now That I’m Older", "Get Real Get Right", and "All for Myself", no, it doesn’t, as the pieces feel disjointed and indulgent.

It all can be summed up, if it can be summed up, in the 25 minute-plus closer (not counting bonus "Too Much (Short Version)"), "Impossible Soul".  With harmonies like in "Futile" or the best harmony/stop marriage "Vesuvius", "Impossible" works well for the first ten minutes, before Stevens randomly introduces some ultra-autotune, like Kanye West messing around in the studio (it might not be fair to say Kanye ‘owns’ the autotune – Cher started it – but at the level Stevens uses it, it’s "Impossible" not to think of Mr. West).  At the fourteenth minute, there’s some group sing with Shara Worden of My Brightest Diamond (QRO album review), then some tech-code voice around the nineteenth minute, and "Soul" even contains its own sweet loss coda.  Impressive?  Without a doubt.  Containing great moments?  Certainly.  "Too Much"?  Yes, that as well.

Despite his predilection for beauty, Sufjan Stevens has not been an artist for the fair-weather fan (akin to fellow acclaimed Brooklynites Grizzly Bear – QRO live review).  The Age of Adz is his most daring piece of work, with the new & uncharted element not in the subject matter like Illinois, Christmas, or BQE, but in the sound itself.  Mistakes were made along the way, and you can be forgiven for wishing Stevens had played it just a little bit safer, but he comes out of it an even more accomplished artist.