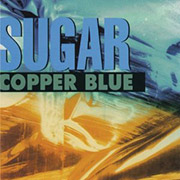 Bit by bit, Bob Mould is reclaiming, re-embracing, and reviving his entire amazing legacy.  There was a time when the iconic singer/songwriter didn’t play his material from first band Hüsker Dü (QRO spotlight on), didn’t play his early solo material, and didn’t play his material from nineties outfit Sugar, despite it being his greatest commercial success.  Hell, there was a time when he just did electronic music.  But then he shifted the ill-received electronic to his DJ side-project duo Blowoff (with Richard Morel – QRO solo album review), formed his ‘Bob Mould Band’ (including Morel & bassist Jason Narducy), and began playing material from his entire catalog, including Sugar & Hüsker (though still naturally weighted towards his newest solo stuff).  Then last year Mould retread his entire legacy, in written form, in autobiography See a Little Light (QRO review).  And now he, with Narducy and Superchunk (QRO live review) drummer/one of the best tweeters in the indieverse Jon Wurster, have been playing Sugar’s classic Copper Blue in its entirety (QRO photos from a performance).  So now is the perfect time to release Copper Blue in deluxe form, with not only b-sides but also mini-album follow-up Beaster and a live recording of an entire show from that tour.

First things first: Copper Blue is an amazing album, one of the best of the nineties, as it saw Mould perfectly combine his Hüsker punk rock with solo post-Hüsker melody, along with just outstanding guitar & songwriting work.  From “The Act We Act” to “Man On the Moon”, Copper Blue doesn’t miss a beat, and manages to be rooted both in Mould’s ever-impressive guitar work, but also his songwriting – these are not songs dominated by guitar solos or by bleeding heart lyrics.  What’s more, there’s diversity, including the smiling-dark (with great bass line) “A Good Idea”, forceful & evocative “The Slim”, just enough story-telling “Slick”, classic end-of-a-relationship cheer “If I Can’t Change Your Mind”, more ironic “Hoover Dam” and “Man On the Moon”, and even ‘the overlooked amazing song on an amazing record’, “Fortune Teller”.

Following those ten tracks are three great b-sides, including a solo mix of “Change Your Mind”, rock instrumental “Clownmaster”, the more hopeful “Try Again”, and the catchy “Needle Hits E”.  “Needle” and “Try” are particularly well received, as they’re the classic definition of a great b-side – great songs that didn’t fit the style of Copper Blue (or Beaster – more akin to second full-length File Under: Easy Listening, which will also be getting a deluxe edition re-release).

Beaster was always an odd follow-up, and not just because it was only six songs.  The record was far darker, with religious overtones, and lacked the single-worthy-ness of Copper Blue.  It’s better seen as just the darker side of Blue, as it comes out here, being released with the prior record.  Admittedly not as excellent as Copper Blue, Beaster still has gems in speed-to-action “Tilted” and pick-you-up “Feeling Better”, though could get a little over-religious – “Judas Cradle”, followed by “JC Auto”, where Mould sings, “I’m your Jesus Christ” – and a little too grind-rock.

The third disc to the deluxe edition is a recording from the Cabaret Metro in Chicago on 7/22/92.  It’s not quite ‘unreleased’, as some of the tracks were found on post-break-up b-side & live release Besides – and all eighteen tracks from the Metro were on unofficial bootleg Bob’s Full House (which also had another live version of “Hoover Dam”, and Mould’s “Lonely Blue Dreams”, made up on the spot while doing a radio show while a listener challenged him to come up with a song based on that title, one Roy Orbison had always wanted to use but never did).  The live disc gives a feeling of Sugar at their height – and they were quite popular in the early nineties alt-rock heyday, and shows what kind of force the trio could add to the already powerful songs.  The live performance includes not just songs from the two records but also b-sides & covers, including “Where Diamonds Are Halos” & “Anyone”, which were written & sung by bassist David Barbe, as well as renditions of The Who’s “Armenia City In the Sky” and The Stooges’ “Dum Dum Boys”.

Earlier this year Bob Mould announced that he was releasing his next new album, this September’s Silver Age, on Merge Records, the little-indie-that-could founded by Laura Balance and McCaughan, of Superchunk – so Wurster re-teaming up with Mould (having played drums in Bob Mould Band before) for Sugar concerts made sense, as does Copper Blue & Beaster being reissued by Merge.  Yes, the Sugar shows aren’t the Hüsker Dü reunion we all hope in vain for, but pound-for-pound Sugar might have had the finer output (to be fair, they only had two-and-a-half studio records…).  But go out and rediscover Copper Blue, go out and finally appreciate Beaster, go out and see Sugar live.