The Orpheum Theater in Tampa’s Ybor District was transformed into a night-time dreamscape forest with the arrival of tropical indie pop duo Summer Salt’s Fall 2021 Tour.... 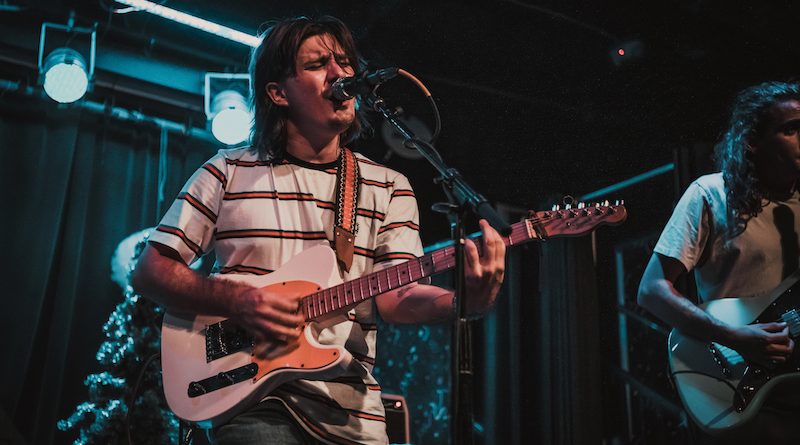 On Wednesday, September 16th, the Orpheum Theater in Tampa’s Ybor District was transformed into a night-time dreamscape forest with the arrival of tropical indie pop duo Summer Salt’s Fall 2021 Tour. Having started their tour only a week earlier, the band brought fellow indie-rock openers Breakup Shoes and Covey on the road with them and to the city for their sixth show of the tour.

Taking the stage, Lafforthun flashed a quick peace sign before jumping right into their set. With the sounds of mellow guitar riffs and heavy drum beats, Zawisa took straight to the mic with his soft and calming voice. Bringing the noise and making sure they left a memory, the band put on a thirty minute set before saying goodbye to hang out at the merch table.

Quickly breaking down, the crowd’s focus was now set on a young Brooklyn-based British artist and musician named Tom Freeman. Going by the stage name Covey, he spent the last year on his ‘Tour to Nobody’, playing at rural locations across the American northeast. Recording the audio and video himself, he turned the audio into his record Tour for Nobody. After having created a TikTok account, Covey began sharing his artwork and music on the platform. Using this platform to build his semi-fictional universe through his music, Covey garnered over a million followers in only a matter of weeks and gained fans across the world.

Accompanied by a touring band, Covey took to the stage immediately with his unique voice and acoustic rhythm. Moving through his set, Covey spoke of how he met Summer Salt while beekeeping in Australia, where they played at an event and invited him on stage to play with them, and then soon touring across the United States with the duo. As Covey continued his performance, the delight was visible in his face when he realized the number of fans he had in the crowd, as many in the back began dancing and singing along to his music. Towards the end of his set, Covey began playing “Sam Jam” from his 2021 album Class of Cardinal Sin. As the chorus of the song began, all of the touring members, from Summer Salt and Breakup Shoes to their managers and assistants, took to the stage to dance around him and sing in unison:

Drawing out the final note, Covey waved goodbye and took off the stage for the main act. Moving up the drum set and checking up on the backdrop consisting of a large crescent moon, clouds, and pine trees, the stage hands begin dumping dozens of white balloons all over the stage.

Soon, the crowd was ready and the stage was set for Summer Salt to make their appearance, with all the microphones and drum set moved to the very edge of the stage. Guitarist/singer Matthew Terry and drummer Eugene Chung formed in high school and later moved from their hometown of Dallas, Texas to the arts-and-culture paradise of Austin after graduating in the early 2010s. With their 2014 debut EP Driving to Hawaii, the band rose to prominence with their signature style of breezy, synesthetic soundscapes that capture the charm of ‘60s era pop, doo-wop, and bossanova. Following this release, the duo released several other EPs and soon released their first full length albums; Happy Camper in 2018, Honeyweed in 2019, and most recently Sequoia Moon this year, which was produced by Phil Ek, a producer who has previously worked with Modest Mouse and Fleet Foxes. Along with their 2020 EP Avenue G, the band solidified their position as one of the brightest rising stars in the indie genre.

Starting with their song “Sweet to Me” from their 2014 EP, the crowd was already moving and grooving to the dreamy vocals from the opening of the song. Taking no time to waste, the band moved their set with grace, while Terry took some time to wave with the rhythm while Chung smiled and nodded to the front row. Speaking to the crowd, Terry referenced driving along the coast in a CJ7 Jeep, with the crowd cheering as they started “Revvin’ my CJ7” from the 2017 EP So Polite. As the set when on, Terry began kicking balloons out to the crowd and asked them what they were waiting for:

“Are you guys ready for Candy Wrappers?”

As the crowd screamed in pure delight, with balloons floating around like clouds in the sky, the band started their hit song “Candy Wrappers” of the EP So Polite. With song that makes one feel as if they are taking a drive through the countryside of Hawaii, the crowd swayed peacefully as one as the whole venue began to sing the pre-chorus in unison:

“Well I just can’t sit around here waiting
Waiting for her to get back home
﻿So for now, you’ll find me on the run
﻿I’ve got no lemon drops, no bubblegum”

As they neared the end of the set, many young couples in the back began dancing together with nothing but smiles across their faces, as the Summer Salt duo made the best of their nights. Closing out the set with their encore, the band kicked out more balloons to the crowd, giving it up for the openers and wishing everyone a great night as the fans poured out into the tropical Florida night.

Lewa Lani
Colors Of Your Love