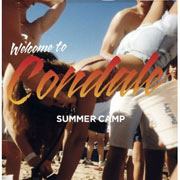 It seems like the ‘80s have never been more popular.  M83 has been doing it Peter-Gabriel-style for something like three albums now (QRO album review), and then there’s the entirety of chillwave whose sound is basically just a hand-me-down sweater.  It’s a warm, comfortable, fuzzy sweater, but your dad still wore it first in 1984.

The same goes for Summer Camp’s debut effort Welcome to Condale.  It’s almost a concept album, as Jeremy Warmsley and Elizabeth Sankey create a soundtrack to the ‘80s version of LA suburb of Condale.  The album plays much like a summer in suburbia.  There’s unrequited love, over-requited love, drama, teen angst, all the staples of a rat pack movie.  Fitting then, that every track would feel right at home alongside Emilio Estevez’s jean jacket.

Click here for photos of Summer Camp at 2013 Bingley Music Live in Bradford, U.K. in the QRO Concert Photo Gallery

Click here for photos of Summer Camp at The Harley in Sheffield, U.K. on March 19th, 2012 in the QRO Concert Photo Gallery

Click here for photos of Summer Camp at 2011 Constellations Festival in Leeds, U.K. in the QRO Concert Photo Gallery

Click here for photos of Summer Camp at 2010 Truck Music Festival in Steventon, U.K. in the QRO Concert Photo Gallery

“Better Off Without You” is so bubblegum pop-tacular that it’s quite impossible not to like it.  A large part of that success can be attributed to Sankey’s sassy croons.  She’s a terrific storyteller, so good in fact, that when she hands the vocal reins over to Warmsley the shine wears off a bit.  Not to say that “Brian Krakow” (sung by Warmsley) isn’t a terrific anthem, but it is telling that the standout moment is when Sankey harmonizes on the chorus.

“Down” is the highlight of the album.  Crunchy guitar gives it almost a college rock texture, but the composition is pure ‘80s sparkle.  The chorus has just the right twinge of melancholy.  Sankey’s vocals float, and Warmsley matches her spooky delivery blow for blow.

Sure, there’s flyover country.  Not every track is a sugary sweet as the opener.  Nothing is un-listenable or un-enjoyable, but not everything shines like “Better Off Without You” or “Down”.  It’s easy to get anxious between the two and skip to the highlights.  But that’s the nature of the beast, where there are mountains there are also valleys.

Welcome To Condale is a terrific introduction to Summer Camp.  For a duo hailing from London, the album drips with stars and stripes and has the genuine feel of a teenage American summer.  Campy, often tongue-in-cheek, and just unbelievable catchy, Summer Camp knows what we loved about the ‘80s.