<img src="http://www.qromag.com/wp-content/uploads/2008/03/sunsetrubdownmarch27.jpg" alt=" " />Spencer Krug & co. played their first show since last October, and hit up the crowd with a belly full of new numbers....

The idiosyncratic act had already begun to overshadow Krug’s ‘day job’, as part of Wolf Parade, with last year’s Random Spirit Lover (QRO review).  On Thursday, March 27th, the band stampeded into the Brooklyn Masonic Temple with a set that not only showed off Spirit Lover, but also the new stuff Krug has been working on over the break.

Sunset Rubdown opened up with Spirit Lover’s orchestral “Winged/Wicked Things”, whose style felt apropos for the Masonic Temple.  The building intensity of “Winged” was kept up with “Stadiums and Shrines II” (from 2006’s Shut Up I Am Dreaming), another piece that fit inside the holy place of a secular religion.  In a way, this all kind of exploded with Spirit Lover’s “Trumpet, Trumpet, Toot! Toot!”, whose anxious energy drove things to eleven. 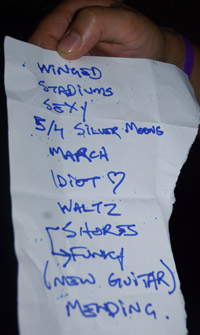 The band simmered down a bit with its first new song, “5/4 Silver Moons” (whether that’s the real name is up for debate, as Sunset Rubdown’s set lists can be a little strange – for “Trumpet”, for instance, “Sexy” is what is listed (see right)).  The echoing piano number expanded into the hall, well matching the space.  The Brooklyn Masonic Temple (QRO venue review) is an unusual part-time venue, located deep in the heart of Brooklyn at Fort Greene, looking more like a ballroom than Bowery Ballroom (QRO venue review) or Highline Ballroom (QRO venue review).  It usually hosts more of the high-minded, artistic acts, like Beirut or múm, through boomBOOM Presents, but this night boomBOOM was in partnership with Jelly NYC, organizers of Brooklyn’s McCarren Pool Parties (QRO venue review), among other events.  JellyNYC is bringing more of the indie-rock, first with Band of Horses last month, and now with its ‘Secret Society’ shows, of which Sunset Rubdown was the inaugural.  Straddling the art-rock and indie-rock worlds the way only someone from Montreal quite can, Krug’s band was an apt pick for the spacious venue.

From “Silver” to the encore break, the set list played one new piece, one Spirit Lover track.  “Up On Your Leopard, Upon the End of Your Feral Days” brought a bright, but frantic march to the Temple, and segued nicely into maybe the best brand-new piece of the evening, “Idiot Heart”.  More pressing, even haunting, this forceful cry proved truly evocative.  Sunset Rubdown climbed back onto the Random saddle with “Stallion”, which turned the haunt up even more.  The press got dark with the new “Funky” (or possibly “Funny”…), but the catchy drumbeat that starts “The Taming of the Hands That Came Back To Life” brought the crowd to cheers.  An untitled new piece with Krug on guitar showed up more echoing, with Camilla Wynn Ingr’s keys particularly standing out.  However, the clear audience favorite had to be the final number before the encore break, Spirit Lover’s jumping, and amazing opener, “The Mending of the Gown”.

Despite his ‘artiste’ image, obtuse song titles, and unusual beat structure, that night, Krug was a winning persona in self-deprecation.  After “Silver”, he let the crowd know, “That was the first time we did that.  Next time it will be better.”  He apologized for the delays between songs, as he would often switch between keyboards and acoustic guitar, while Michael Doerksen and Jordan Robson-Cramer would trade off electric guitar and drumming duties – “We never claimed to be professionals…”  When they returned from the encore break, Krug told the audience, “Thanks.  Sorry if that seems like a token gesture routine, no one can ever assume.”  He then admitted, “I gotta take a breath, ‘cause I’m an old man.  Sorry.”  And when someone from the balcony shouted for “Stadiums and Shrines II” (see right), Krug didn’t just inform the fellow that they’d already played that song, but added, “Probably wasn’t very good.  You probably didn’t recognize it.”  But Krug also joked around, whether effusive in his praise of sponsors Boost Mobile, whose logo adorned the backdrop (after thanking the crowd for welcoming him and all back for an encore, he added “You’ve ‘boosted’ our self-esteem…”), or in bantering with Ingr.  And Ingr bantered with the crowd herself – when someone shouted, “I love you, Camilla!”, she shouted back, “I love you too – even though I don’t know you…”

For their return, Sunset Rubdown jumped into the past, with Shut Up’s slow, epic “Us Ones In Between”, and the hyper-spook-folk “Three Colours”, from their self-titled debut (Krug: “We only know one other song.”  Ingr: “We’re only good at one other song.”).  However, the night really belonged to new material (though that meant excellent Random Spirit Lover pieces like “Courtesan Has Sung” and “For the Pier (and Dead Shimmering)” were unfortunately skipped).  A prolific artist, Spencer Krug has put out three Sunset Rubdown full-lengths in as many years, plus working on Swan Lake’s Beast Moans (QRO review) and Frog Eyes’ Tears of the Valedictorian (QRO review), so maybe it shouldn’t come as a shock that he’s got new Sunset work for 2008, to go along with the upcoming Wolf Parade record this year.  Maybe what’s more remarkable is that it’s the Sunset Rubdown material that’s looking to be the more feverishly anticipated…