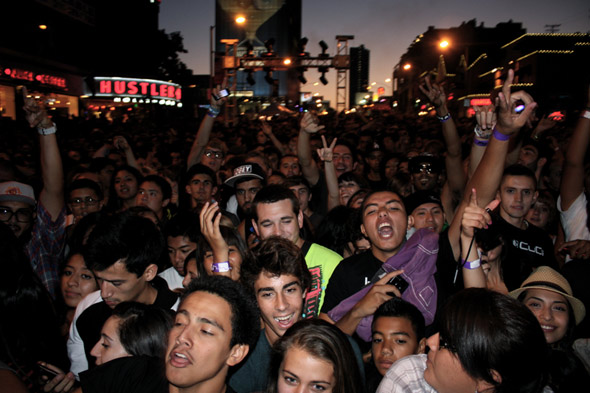 Saturday, compared to the two preceding nights, was the true event.  Billy Corgan of The Smashing Pumpkins put it best when he said, "I can hardly drive down this street, I can’t believe I’m playing on it."  It’s a big deal for The Strip to be closed.  The two stages set up on opposing ends of the east-west running Sunset Blvd. had people at one end staring into the setting sun and at the other end facing away from it.  Leave it to L.A. to give people an even tan at a music festival. 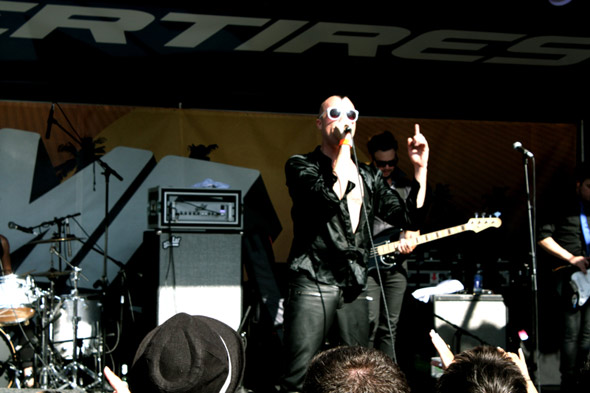 but one of the first to kick things off outside was Neon Trees.  They played on the east stage giving a whole-hearted performance as the sun began to set in front of them.  Their hit song "Animal" sounded great and went over really well live.  Lead singer, Tyler Glenn, gave a short motivational speech about dressing and looking however you want to in the spirit of freedom of self-expression before closing their set.  His words acted as a wonderful transition from their set to Semi-Precious Weapons‘ set. 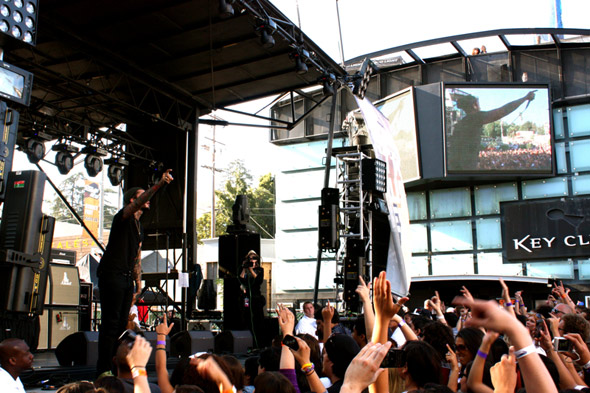 While The Strip is known for its extensive rock history, hip-hop has been a staple on The Strip for years, and the first to represent that aspect of the scene on Saturday was Travis McCoy on the west stage.  His hit "Billionaire (feat. Bruno Mars)" was an instant sing-along 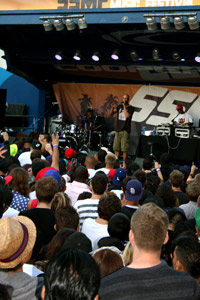 for the whole street, but most of the rest of his set lacked the same kind of impact.  Back on the west stage, the sound crew seemed to be going through a technical nightmare trying to set up for Common.  The audience got to follow along with the problems as the soundman spoke to the stagehands over the P.A. for us all to hear.  It was a really unprofessional display by the sound people and totally unworthy of an artist and music veteran like Common.  But, as a true professional should, Common took the stage and delivered a killer set despite the technical difficulties.  Playing hits old and new and backed by a tight band, he gave us a quick history of hip-hop with a medley of some of his favorite jams from other artists such as Big E Smalls and the Beastie Boyz.  He even treated the audience to a bit of freestyling, and closed with his hit "Universal Mind Control". 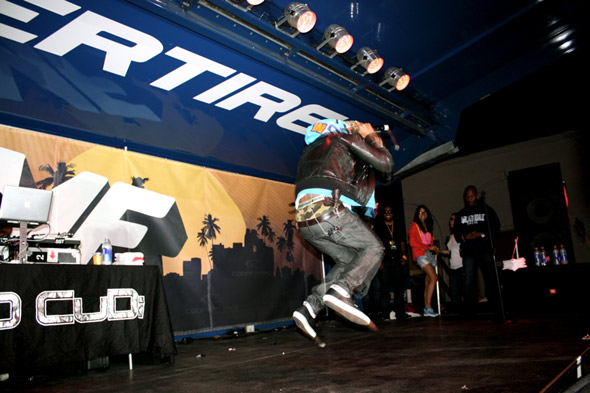 Kid Cudi was another among the most notable showman of the night.  Backed by only a DJ, Cudi had no problem commanding the whole stage and the audience, most of who, presumably, came to see him, as he was the last act on the east stage.  The other half of the festival attendees was there to see The Smashing Pumpkins

on the west stage.  The Pumpkins played a happy mix of old and new songs and only showed favoritism for old favorites during the encore.  The biggest cheers, of course, went to the songs people recognized from the ‘90s, so The Pumpkins should be commended for believing in their new material and featuring it prominently in their set.  The sound was muddier than it could’ve been, which made the lighter songs like "1979" and "Song For a Son" (a standout among the new material) sound refreshingly clear compared to the heavier songs.  A lot of their characteristic layered guitar sounds were lost in the overwhelming bass sound.  Corgan has a simple stand and deliver performance attitude, but there is somehow still a strong and sincere connection between him and the audience.  His new young drummer, 19-year-old Mike Byrne, was featured as they started to jam Led Zeppelin’s "Moby Dick" and Byrne took his turn at being John Bonham.  He was dang good, and Corgan seemed really pumped about him too.  Corgan added a personal touch to his set by inviting his two kids on stage.  They wore lucha libre masks, which kind of brought to mind Michael Jackson’s kids often seen in public wearing masks, but it came across as just a joke with Corgan’s kids, of course.  They delivered to him a piece of paper on which he had listed a bunch of his influences that he wanted to share with the audience.  The audience stayed put and cheered after the set, probably still hungry for more of their old favorite Pumpkin songs, and, to everyone’s enjoyment, the band returned for a rousing encore. 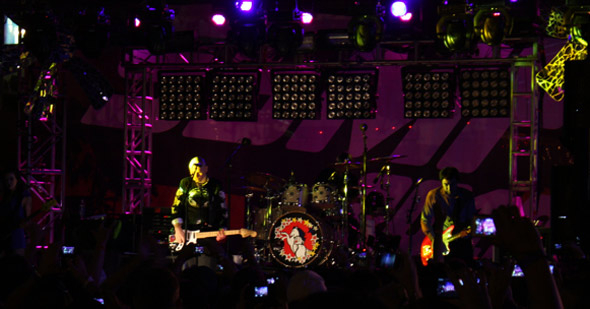