There are some acts who simply deliver. Acts like Superchunk.... 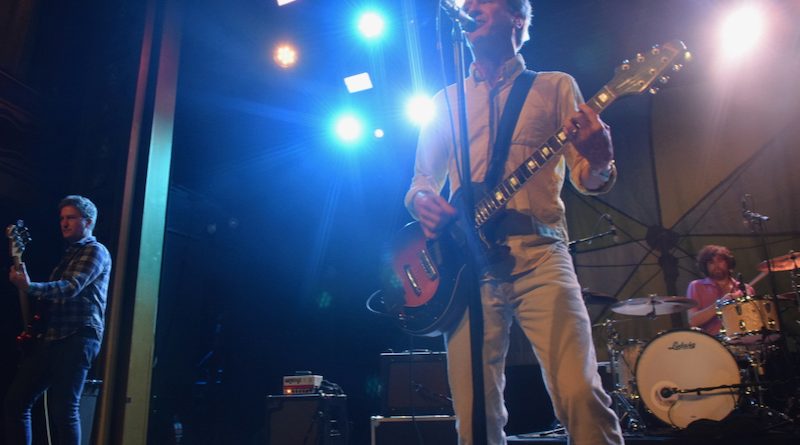 Photos of Superchunk at 2018 Riot Fest in Chicago, IL

Photos of Superchunk at SXSW 2018 in Austin, TX

Photos of Superchunk at Rough Trade NYC in Brooklyn, NY on February 16th, 2018

Photos of Superchunk at Webster Hall on December 2nd, 2015

Photos of Superchunk at 2014 Riot Fest

Photos of Superchunk at SPIN ‘Year In Music’ party at Music Hall of Williamsburg in Brooklyn, NY on December 10th, 2013

Photos of Superchunk in Times Square for 2012 CBGB Festival in New York, NY

Photos of Superchunk at Scala in London, U.K. on December 1st, 2011

Photos of Superchunk at SXSW 2010

Photos of Superchunk at 2010 Treasure Island in San Francisco, CA

There are some acts who simply deliver. They’re not flashy or wild, not trendy or of-the-moment, but they’ve got a deep well of great songs to draw from, and bring it on stage. You know you’re going to have a good time when you see them. Acts like Superchunk, who finally came to New York’s Webster Hall (QRO venue review) on Tuesday, June 14th.

“Finally” because this show and the final Northeast leg of their tour behind this year’s Wild Loneliness (QRO review) had been postponed twice due to COVID positive tests. It’s something that can’t be helped in this day & age, but thankfully Superchunk are road warriors, even as the nineties alt-punks are now mostly well into their fifties. They were on the road well before cell phones and GPS, and still get in the van with their gear. They started their own indie label, Merge Records, before that was commonplace. Even taking the first decade of this century/millennium off didn’t mean that they couldn’t get right back into gear.

Having decades worth of albums does mean that they could vary widely in what they played, from the recent Wild material such as “This Night” and “On the Floor” at the start to classics like “Driveway to Driveway” right next. As on record, on stage the group nicely balances between punk humor and punk furor. Singer/guitarist Mac McCaughan could remark on guitarist Jim Wilbur wearing reading glasses (Wilbur pointing out to the crowd that they would get old, too…) that did manage not to fall of (Wilbur credited his big head). But McCaughan could also sing out their new global warming warning, “Endless Summer”, Trump era kiss-off “What a Time To Be Alive” (from the 2018 album of the same name – QRO review), even their classic working man’s rage from when they were young, “Slack Motherfucker”, in the encore.

There were newer, twenty-first century pieces like those mentioned, the upbeat “You & Me & Jackie Mintoo” where McCaughan declares the song’s album title, “I Hate Music” (QRO album review), or the exuberant “Learned to Surf” (from 2010 hiatus return record Majesty Shredding – QRO review). There were the nineties alt-boom classics like “Slack”, “Driveway”, or “Hyper Enough”, still given with the same level energy as then. There were even some rarer oldies, like encore return “Mower” or mid-set “Water Wings”. For a few songs, they were even joined by keyboardist Frank Bruno, who had worked on Wild.

Admittedly, in a band with funny musicians like drummer Jon Wurster and touring bassist Jason Narducy (QRO spotlight on – who stalked the stage like the main man in his & Wurster’s other Merge Records act, Bob Mould), there could have been room for more between-song banter. But that was because they just wanted to fit in more songs, 23 in total, including a four-song encore that ended with opener Torres joining for “Fishing” – and then the rare second encore, of “Throwing Things”.

[note: admittedly, your correspondent wanted them to do their contribution to the Aqua Teen Hunger Force Colon Movie Film for Theaters, “Misfits and Mistakes”– QRO review – as they had earlier on this tour, but really needs Meatwad for the song to move…]

Superchunk are professionals, but they don’t let that get in the way of having a good time, of rocking for all the ages. They just deliver.