Superchunk played for the kids & their parents at BRIC Celebrate Brooklyn! Festival.... 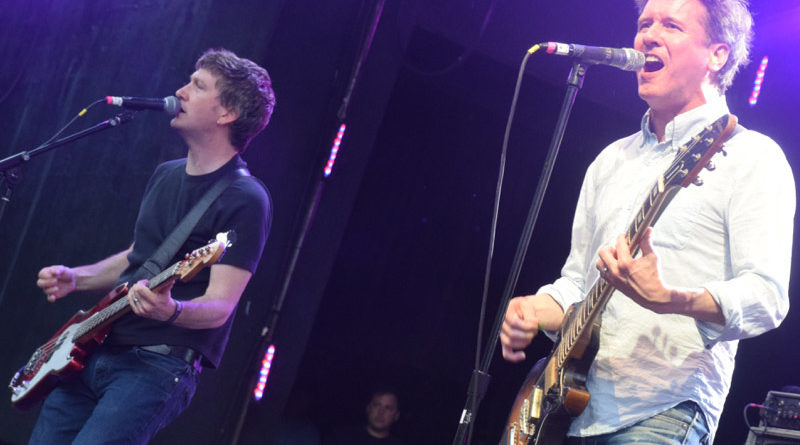 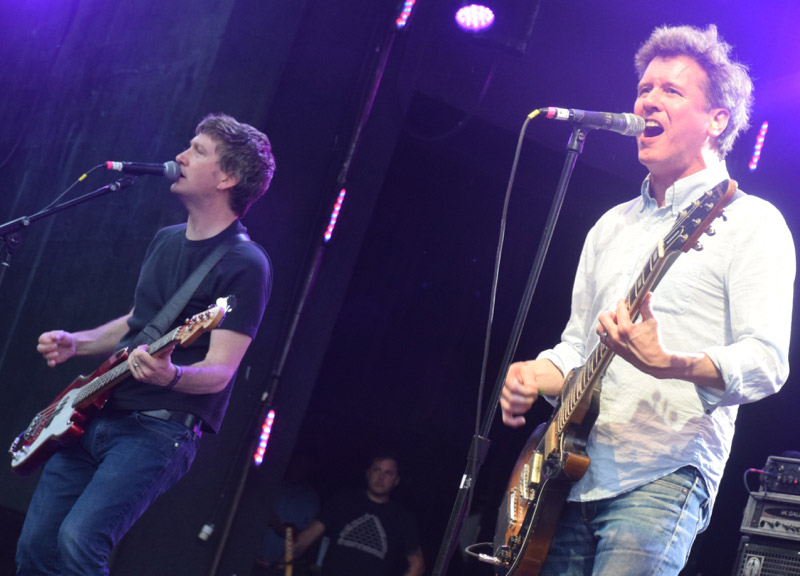 Click here for photos of Superchunk at 2018 Riot Fest in Chicago, IL in the QRO Concert Photo Gallery

Click here for photos of Superchunk at SXSW 2018 in Austin, TX in the QRO Concert Photo Gallery

Click here for photos of Superchunk at Rough Trade NYC in Brooklyn, NY on February 16th, 2018 in the QRO Concert Photo Gallery

Most of the big, free shows in NYC over each summer at parks like Prospect Park are highbrow niche and/or family-friendly material. It’s fine to have classical music, regional dance, or a kid’s show, but doesn’t necessarily bring out the key 18-34 year-old demographic. But there are always a handful that draw the young adults, even as they also skew older – and possibly not so family-friendly. Such was the case when Superchunk played between Aimee Mann & Jonathan Coulton at Prospect Park Bandshell on Thursday, June 21st for BRIC Celebrate Brooklyn! Festival.

Even as Coulton was opening up the event, Prospect Park Bandshell (QRO venue review) was packed – including a whole lot of kids. It is the summer, and it is Park Slope, where the Williamsburg hipsters move to when they have a child, but it was still impressive just how many kids were there. It’s also kind of wonderful to see how little it takes for a kid to have fun, just a park & some other kids, running around in a game of tag (and not on their phones or devices or what have you). The folding chairs in the stone floor section in front of the Bandshell were all taken, as was much of the grass area behind with park blankets (save the row-like space behind the soundboard and the large tent over it). 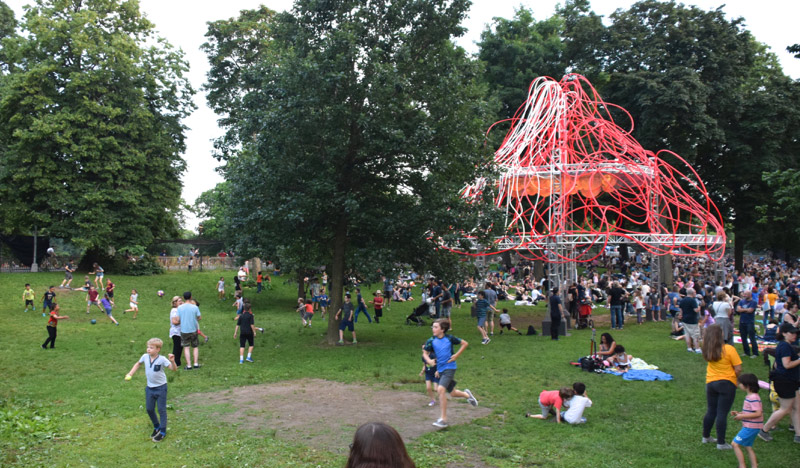 This is the fortieth anniversary of BRIC Celebrate Brooklyn! Festival, and Superchunk were introduced as being part of its “celebration of democratic values” in the face of what’s going on right now. This is the place where Democratic Senator Chuck Schumer once introduced Grace Potter & The Nocturnals (QRO photos) to celebrate New York’s Judge Sonia Sotomayor ascending to the Supreme Court (and she’s actually from The Bronx…), so not shy of NYC left-wing politics, but it was still notable. But this is the world we live in right now. 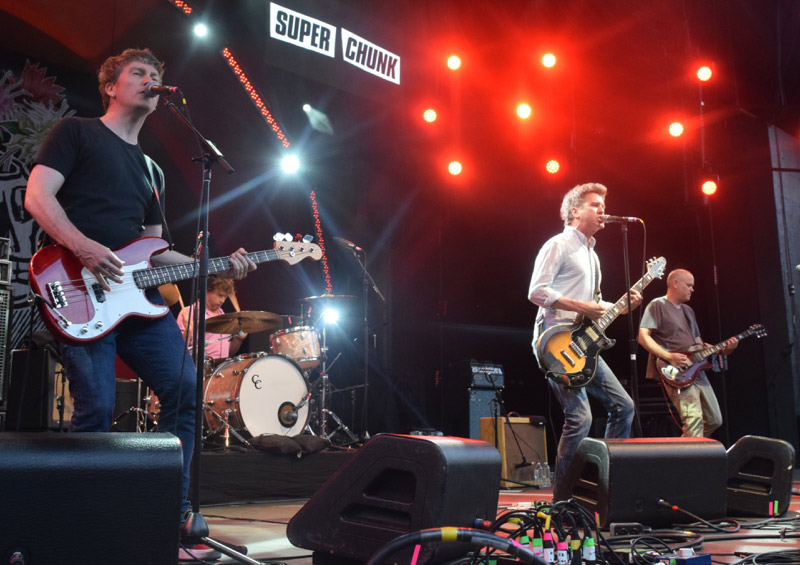 Superchunk were lauded for their recent political record, What a Time To Be Alive (QRO review), as well as their name (it is always lame to reference a band’s name…), and the set definitely featured the new album, such as “Reagan Youth” (about the band about the old president), the title track, and single “Erasure”. Before “Erasure”, singer/guitarist Mac McCaughan referenced how may reviews talked about how “angry and vitriolic” the full-length is, with which he remarked, “Now, I don’t think it’s angry and vitriolic enough…” The performance of the song also featured guest star Waxahatchee’s Katie Crutchfield, who was on the recording of it (McCaughan: guitarist Jim Wilbur “Doesn’t give up his mike for just anyone…”). Admittedly, the mikes seemed low at the start, hampering said political lyrics, but were readjusted later on. 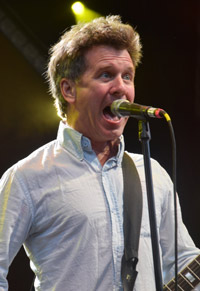 Superchunk didn’t just play new songs, but also did rarely-played old “Why Do You Have To Put a Date On Everything”, a request, plus classics like “Like a Fool” and “Driveway to Driveway”. Most importantly, yes, they played their early breakthrough piece, “Slack Motherfucker” – and didn’t change it to “Mothertrucker” or something. This might have a free show with lots of kids, but the young working anthem still needed to be sung.

Afterwards, Aimee Mann (QRO photos) joked that she was going to do some slow, sad songs, “Basically the opposite of Superchunk. The rocking is over, you can sit down.” She also joked about her songs with swears, though warned beforehand. And it was all nothing compared to the very-nearly-NSFW Pride Weekend performance two nights later by Fischerspooner (two words: schlong thong – QRO photos). It’s great to have rock, and kids, for free. 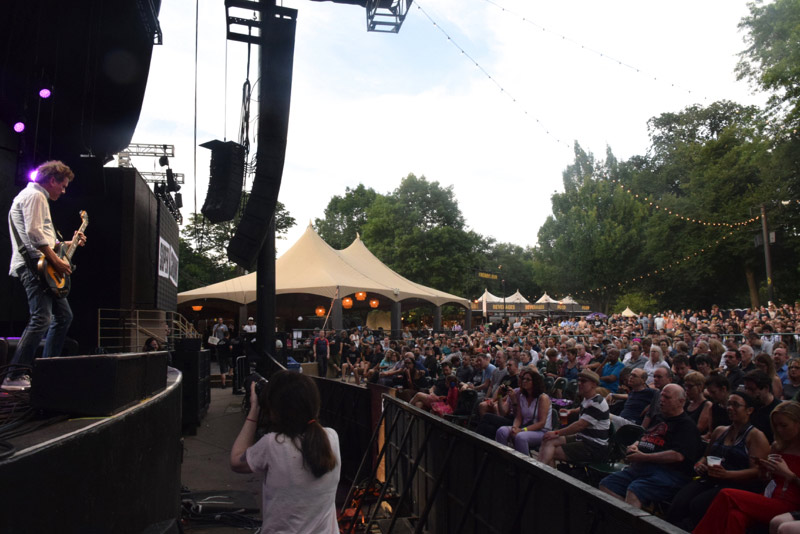