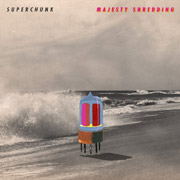 Today’s hipsters might not believe it, but there was a time before the proliferation of sub-genres and sub-sub-genres, before everything got prefixes added to them like ‘indie-’ and ‘alt-’ (not to mention ‘psych-’ or ‘chill-’).  In the late twentieth century, there was alternative music, indie-rock, punk, some short-lived made-up-by-the-mainstream styles like grunge, and that was about it.  It was a time when you could just sit back and enjoy bands, not worrying that they were too serious, or not serious enough, too complex, or too simple, etc.  And now it’s making a welcome return as nineties alt-rockers Superchunk put out Majesty Shredding, their first original LP in almost a decade.

Not that Superchunk weren’t busy in this millennium, having founded a little record label called Merge, which has put out albums like Arcade Fire’s recent number one The Suburbs (QRO review), as well as the alt-massive likes of Spoon (QRO live review) and She & Him (QRO live review).  In fact, Superchunk’s hiatus + Merge’s success made singer/guitarist Mac McCaughan & bassist Laura Balance better known for their label than their band – many people waiting on long lines for Merge’s showcase this year at SXSW (QRO day recap), when told the ‘secret guest’ was Superchunk (QRO photos at SXSW), responded, “Who?” (with which they should have been kicked out of the line…).  The band has been doing occasional reunion spots here & there in the last couple of years, and contributed the hidden song to the Aqua Teen Hunger Force Colon The Movie soundtrack, “Misfits & Mistakes” (including dueting with Meatwad!), so the new album & tour isn’t so surprising – but it’s still great that Majesty Shredding can just pick up where Superchunk left off.

Catchy indie-rock pervades her Majesty, from the hooks of opener “Digging for Something” to big finish “Everything at Once”.  Some pieces naturally stand out more than others, with “Crossed Wires” and “Learned to Surf” standing the tallest, up-rocking without being cheesy.  McCaughan’s vocals, in fact, are a little too unchanged, as his voice sounds far younger than however old he actually is, and this threatens to veer the band into pop-punk or even brat-emo, such as on “Rosemarie”.  Superchunk don’t play it all upbeat, bringing a great, sadder change with “Factures in Plaster” and “Winter Games” (though the latter suffers from coming after “Surf”, and can’t help but be stuck in the “Surf” shadow).

This new decade has brought the reunion trend fully into the nineties with the year-long Pavement (QRO greatest hits review) tour, which threatens to overshadow the Superchunk reunion the way last decade’s Pixies (QRO live review) reunion overshadowed that of fellow eighties alt-icons Dinosaur Jr. (QRO live review) and Mission of Burma (QRO live review).  But also like Dinosaur Jr. & Burma vs. Pixies, Superchunk has one-upped their decade’s fellow reunioners by putting out new music – that fits right in with the old.  No, Majesty Shredding isn’t as alt-complex as the likes of today’s Arcade Fire, but indie-rocks just like you’ve so been missing (or should have known about in the first place).