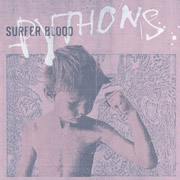 QRO’s review of Surfer Blood at The Social in Orlando, FL on September 17th, 2010

A few years ago, people were saying that the next burgeoning alt-scene was in South Florida, of all places, and mostly because of the success of locals Surfer Blood.  They broke through at a number of industry fests like CMJ 2009 (QRO recap) and SXSW 2010 (QRO recap), saw debut Astro Coast (QRO review) win serious fans, and eventually jumped from indie imprint Kanine to the majors.  But that was a long time ago in music, and the band doesn’t hit nearly as sweet a spot, second time ‘round, on Pythons.

Surfer Blood fans will probably say that what they liked about Astro Coast is still there on Pythons, cheery surf with just enough indie-rock, and they’re not necessarily wrong.  However, the new record just doesn’t feel nearly as original, or as special.  The relax on pieces like opener “Demon Dance” comes off as too slack, too slacker.  Meanwhile, the cheer of the subsequent “Gravity” has a neo-Vampire Weekend (QRO live review) nature to it – but Vampire Weekend’s not yet old enough to have a ‘neo’.  Some of the songs stand up better, like those two and middle number “Squeezing Blood”, but by the back half of Pythons, the cheer and bop becomes unremarkable, and the sway and oohs just pleading.

Surfer Blood left southern Florida for California to make Pythons, and while that’s probably just a product of trying to be an alt-band in southern Florida, it’s also something of a statement on the band: they’re just not anything special anymore.