<img src="http://www.qromag.com/wp-content/uploads/2011/03/swansfeb27.jpg" alt="Swans : Live" />There may be no answers to the great existential questions, but we are all in the darkness. ... 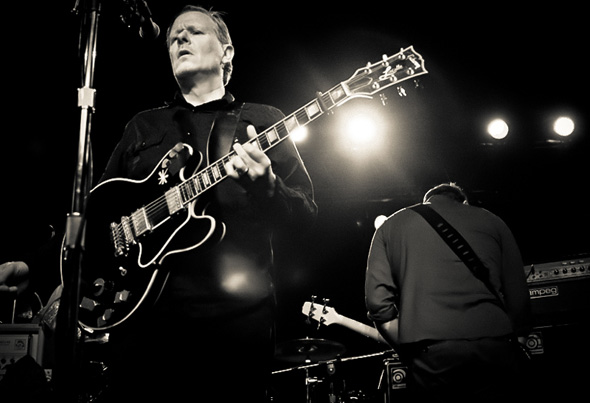 Click here for photos of Swans at La Zona Rosa in Austin, TX on September 14th, 2012 in the QRO Concert Photo Gallery

Click here for photos of Michael Gira at 2012 Primavera Sound Festival in Barcelona, Spain in the QRO Concert Photo Gallery

Click here for photos of Swans at 2011 All Tomorrow’s Parties at Alexandra Palace in London, U.K. in the QRO Concert Photo Gallery

Thor Harris walked out on stage at Roseland Theater on Monday, February 27th, grabbed his hammers and started banging.  On long, wrought iron bars hung like a wind chime, he beat out the chime of church bells.  Phil Puleo came out from behind stacks of the many Orange amplifiers and took his place behind his wall of drums.  He added dulcimer to the air.  Then, Christoph Hahn appeared from the left to weave in some pedal steel.  Chris Pravdica (also of Flux Information System) joined in on bass.  Finally, Norman Westburg and Michael Gira (the Swans members that have been there since the beginning) walked out.  Norman filled out the growing cacophony with guitar and Michael, cowboy hat on head, grimly stared out among the crowd, into the distance.  Puleo began pounding the drums with full force.  “No Words, No Thoughts” from the latest release My Father Will Guide Me Up a Rope To the Sky poured out and filled the room and all the spaces in between us. 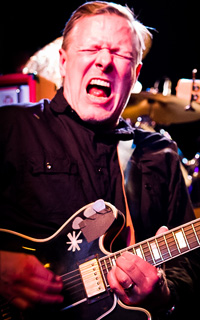 The Swans emerged from the post-punk, No Wave scene around 1982, a scene defined by its abrasive and non-traditional interpretation of music.  As Michael Gira explained in the documentary, Kill Your Idols, he didn’t play the music for acceptance; he played it for himself.  This would explain the stories about the excruciating volume levels of early Swans shows.  It was a defiant act, a denial of all forms of established norms.  This was rage; this was uncomfortable.  And much like the Dada Movement and its focus on breaking down established rules in a nihilistic fashion, through chaos and the irrational, the No Wave Movement burned out hard and fast.  Now in 2010, with My Father…, the music has become more complex, more layered, and more cohesive.  With the addition of clarinet, dulcimer, pedal steel, gong, jews harp, and various other percussion to bang on, the Swans have created a vastness of sound.  It has depth.  It has a wide expanse.  Early Swans generated intensity through sheer volume, but this big sound, inherent to their style, has reached a pinnacle on this 2010 release.  The sound of the Swans is more like a vibration, a resonance that has existed before all else.  It reverberates through the vast black emptiness of space, which contains all the knowledge of creation and destruction in its darkness.  To be wrapped up in the energy that permeates that void, the Swans hold up a mirror to show the nothingness to itself. 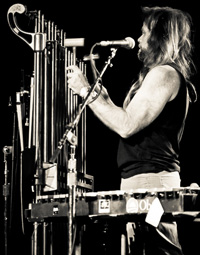 The latest Swans album, My Father… was inspired by an epiphany moment Michael Gira had when he began hearing the music in his head.  It is a reflection of Michael Gira as part of the infinite.  It is a contemplation of that event.  This album is the evolution of all the existential themes that are contained throughout the body of work of the Swans.  Whether concerned with thoughts about faith, or the lack thereof, My Father displays a yearning for connection with the beyond.

The Swans performed a mix of old and new that night, which spanned their discography from 1984-2010.  One of the highlights was definitely “Sex God Sex” (Children of God, 1987).  Gira screamed out like a preacher man, “Praise the Lord!” and “I am sexless.”  This preaching style was reminiscent of The Doors’ “Soft Parade” where Jim Morrison shouts, “You cannot petition the Lord with prayer!”  Gira has mentioned in previous interviews that Jim Morrison was one of his early influences.  “I Crawled” (Young God, 1984) 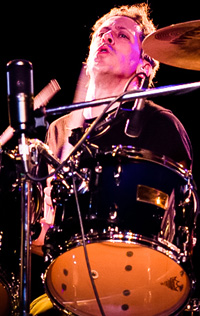 showed off the beautiful harmonies between the deep vibrating voice of Gira and the pedal steel of Hahn.  Thor played the xylophone, a shirtless Viking, 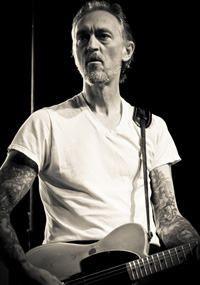 running a stringed bow across the ends on the keys.  Gira screamed out to the crowd, “You’re my father / I want you to be my Father!”

“Eden’s Prison” rang out like a rebel anthem as the last song of the set.  Paleo’s drumming was merciless.  That man has an endless source of pounding energy.  He drove that train straight out of Eden with Gira announcing, “We are free!” and the guitars soared over our heads.  “Little Mouth” was the encore, the last song from My Father….  “May I find 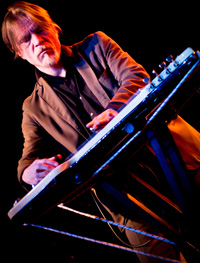 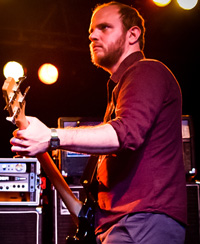 little mouth inside of this head,” Gira intoned.  This ended the performance with a yearning for faith (in conflict with the acknowledgement of the constriction of that faith) and a yearning for home and comfort, which the audience at this Swans show found in the explosion of sound and with the words sung from the lips of Michael Gira.  There may be no answers to the great existential questions, but we are all in the darkness. 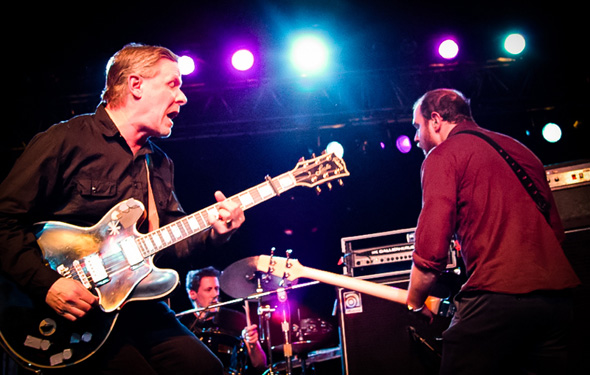