The Economist just said that the music industry is growing again – or at least finished bottoming out.  So with that ringing endorsement, there hadn’t been a better time to head down to Austin for its annual, massive, music industry festival, South-by-Southwest – Tuesday-Saturday, March 12th to 16th, which QRO did, with Ted Chase, Ivey Haber, and Alex Ramirez.

South-by-Southwest has slowly been expanding its four-day festival into five, attempting to colonize the Tuesday before.  While it’s certainly the lightest of the five days (can never count the Sunday after, which might be officially included, but only had one showcase), that’s more due to fewer unofficial showcases, especially the ones that run the other four days.  So daytime was light on things to see (more for settling in & picking up credentials), but nighttime definitely had bands/events/venues to check out. 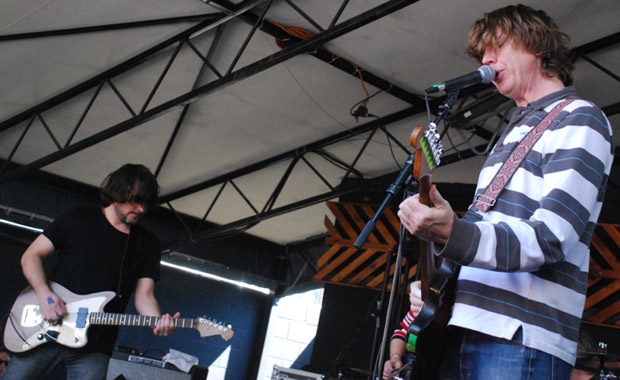 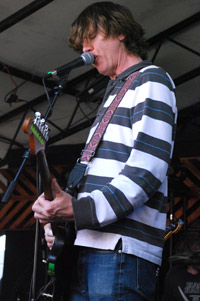 One band that was playing a whole lot at SXSW 2013 was Chelsea Light Moving – the new band from Thurston Moore (QRO live review) of the legendary Sonic Youth (QRO live review).  CLM formed in the aftermath of the divorce between Moore and fellow SY singer/guitarist Kim Gordon (who’s gone on to form her own act, Body/Head).  The demise of one of alt-rock’s most storied marriages was a huge blow, and while no one seems to know the ultimate fate of Sonic Youth (not even their equally great other singer/guitarist, Lee Ranaldo), they certainly aren’t active right now, while everyone does their own personal projects, like Chelsea Light Moving.

One advantage to having Moore doing his own, much less known act is that you could see him multiple times at SXSW, at smaller venues & earlier times.  Another was that CLM doesn’t have the support staff of Sonic Youth, so Moore himself was seen in the crowd before the set, looking for Mohawk’s sound guy.  That being said, his new band itself was nothing amazing – a rawer, earlier Sonic Youth, sludgier, but kind of what you expected.  And it was impossible not to think that you’d rather be watching Sonic Youth, and that you damn well hope that Sonic Youth isn’t finished.  It might have been better had Moore just gone solo, since then he could play his old solo songs (QRO solo album review) as well as the new CLM ones – again, just hearing the songs from CLM’s debut isn’t what you’re hoping for from Thurston Moore.

Still, a definite act to catch at SXSW, even if just to see where single Moore is at these days.

Ivey Haber walked into Red 7 to start her South-by-Southwest, with singer/guitarist Kacey Johnsing and Los Angeles’ Hands.  A fan said, “You stumbled into the right show!”: 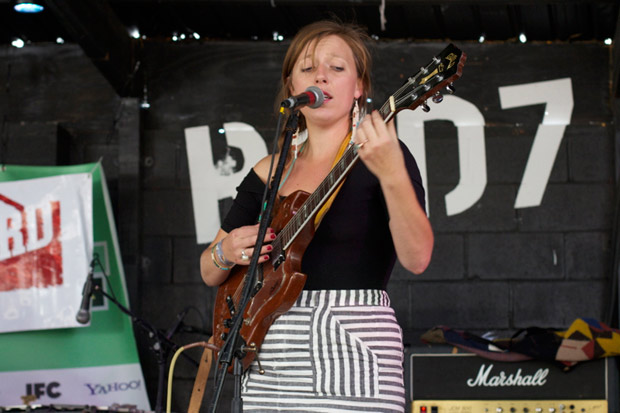 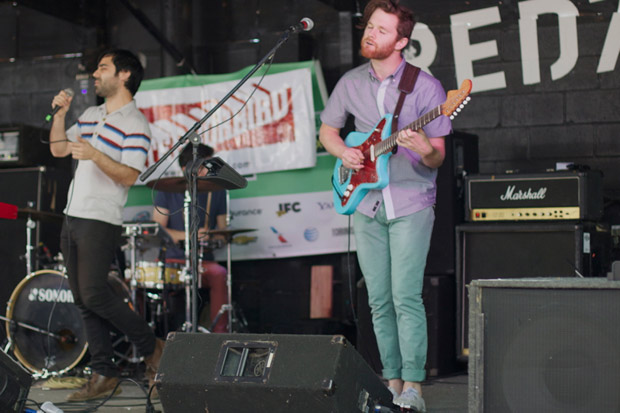 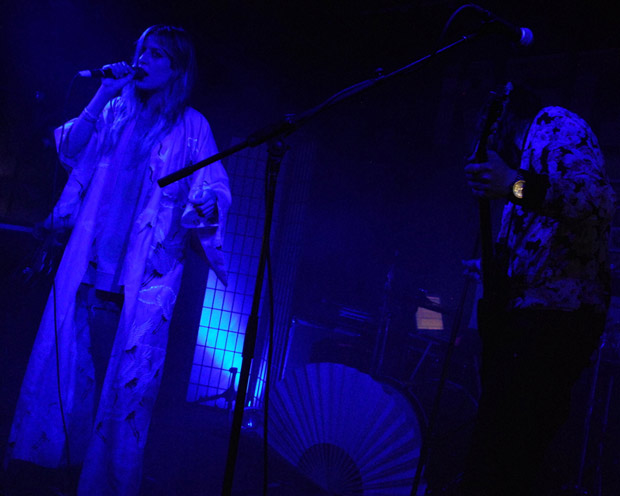 Just before they go on tour with Garbage (QRO album review), IO ECHO played SXSW.  While it was a day show at Red 7, at least they were playing inside where it was dark – for this dark band.  They kind of made one think of a goth Florence & The Machine (QRO live review), especially the lead singer – though there was too much smoke machine. 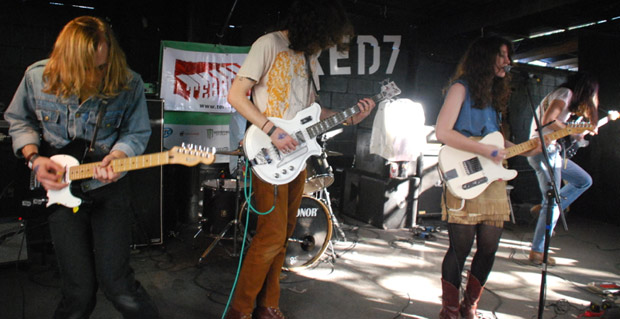 There are a lot of these neo-garage fuzzy acts in Brooklyn, especially female-led ones.  Widowspeak is one if the better, if not best ones, but still struggled to standout.  At least we’re at the point where we can say there are a lot of female-led bands of a type in indie music. 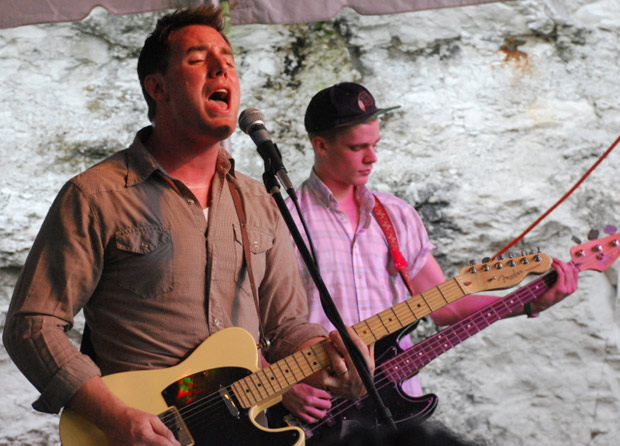 Headed over to Club de Ville for The Polyphonic Spree, but got the time wrong (between changing time zones & the start of Daylight Savings, it was easy to be an hour off at the start of South-by-Southwest…).  Did see the up-attitude outfit Wild Cub, who said something about The Spree and The Very Best being in Uganda or something – so thought that both acts had cancelled their SXSW appearances, and left.  Turns out it was just that both acts had just come back from Uganda – and missed The Spree at Club de Ville…

Ivey Haber headed to Cedar Street Courtyard for the ‘Music Meets Tech’ party by Dyn.  One of her (and many others’) favorite showcases of South-by-Southwest 2013, it had not just free drinks, but great performances by great acts including John McCauley (of Deer Tick – QRO live review), Delta Spirit, Kopecky Family Band, Joe Fletcher & The Wrong Reasons, and Dan Blakeslee – and amazing free food (always a wonderful find at SXSW): 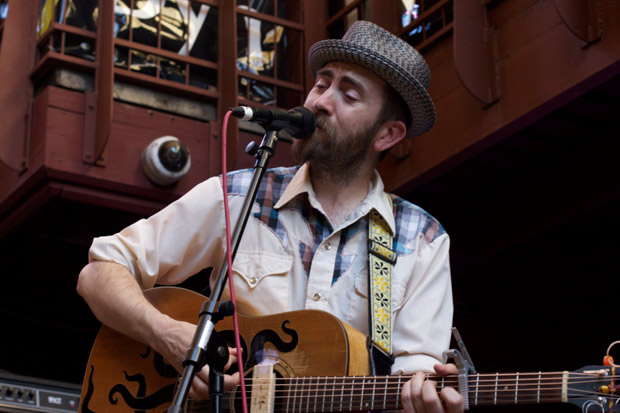 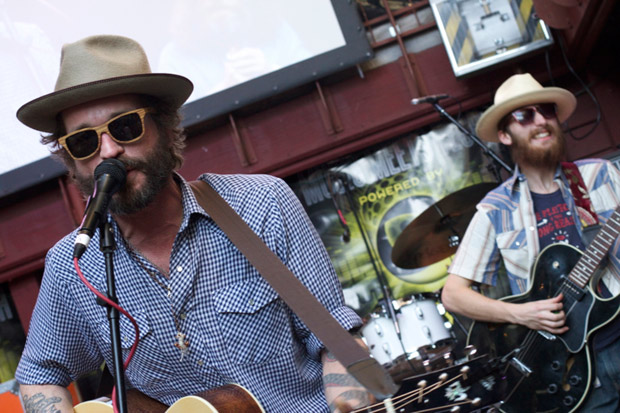 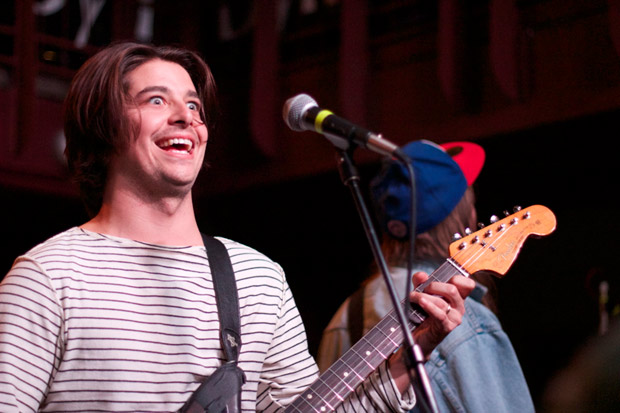 Photos of Delta Spirit at Bogart’s in Cincinnati, OH on November 16th, 2012

Photos of Delta Spirit at ‘Seaport Six’ at Bank of America Pavilion in Boston, MA on June 14th, 2012

Photos of Delta Spirit at SXSW 2012 in Austin, TX

Photos of Delta Spirit at 2010 Harvest of Hope Festival in St. Augustine, FL 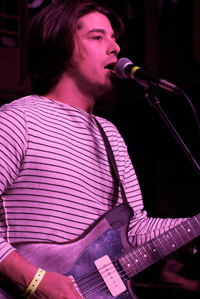 Matt Vasquez, singer/frontman of Delta Spirit, was in high spirits, saying to one fan, “Are y’all married?  Why don’t you just take her to Mexico and do it?  I did…” – and then showed the fan his wedding band.

But his craziest moment – one of the craziest of SXSW ’13 – was when he climbed the rafters during the last song of their set.  Fans went crazy, six security guards charged after him – no idea what happened to him afterwards… 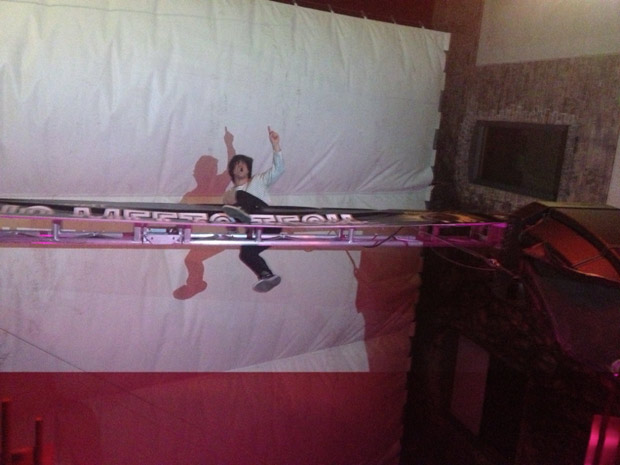 However, a little bird said that Vasquez was in “trouble…” and couldn’t come out for John McCauley & Friends.  Vasquez, lead singer of Deer Tick, and Taylor Goldsmith of the subsequent Dawes once formed super side-group Middle Brother, but Vasquez’s antics seemingly prevented the reunion – but Goldsmith did join McCauley on stage for one Middle Brother piece, “Dreaming”. 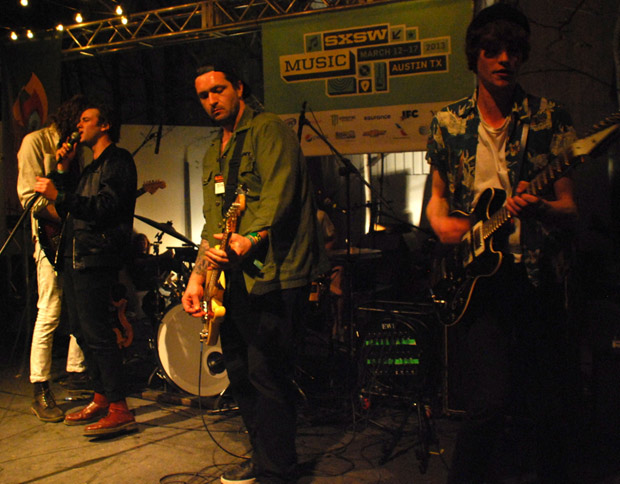 While Ivey was enjoying free food & drinks, Ted Chase was stuck on line waiting for VICELAND to open.  The space just behind the Convention Center took forever to clear out from the daytime show, which saw massive lines of badge-holders, wristband-wearers, and especially RSVP-ers form.  However, once it finally did open, it was fairly smooth to enter – at least for those wearing official credentials.  And there were free drinks inside.

First up was Skaters, who were very Strokes (QRO album review)-like.  Not necessarily a bad thing, but the Strokes were last revelatory over a decade ago – by the time of their second album, they were old hat, so Skaters weren’t exactly eye-opening. 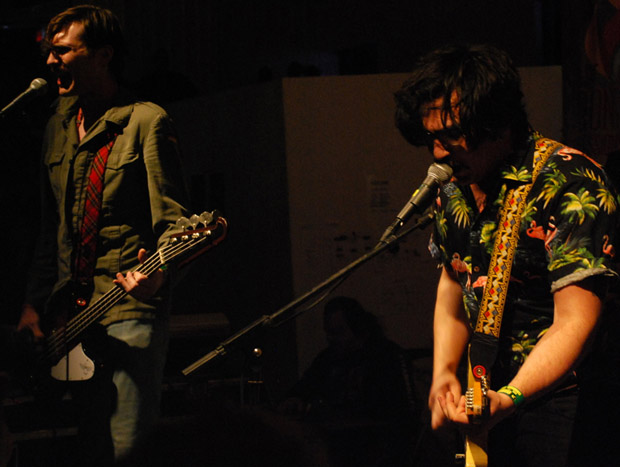 Click here for photos of Team Spirit at 2012 4Knots Festival in New York, NY in the QRO Concert Photo Gallery

Click here for photos of Team Spirit at 2012 Bushwick Walkabout in Brooklyn, NY in the QRO Concert Photo Gallery

The night got garage-y after that in Brooklyn’s Team Spirit.  A potential break-out garage band, they’re not the first Brooklyn act – or even first Brooklyn garage band – you’d want to see to get such exposure, but still, good for them. 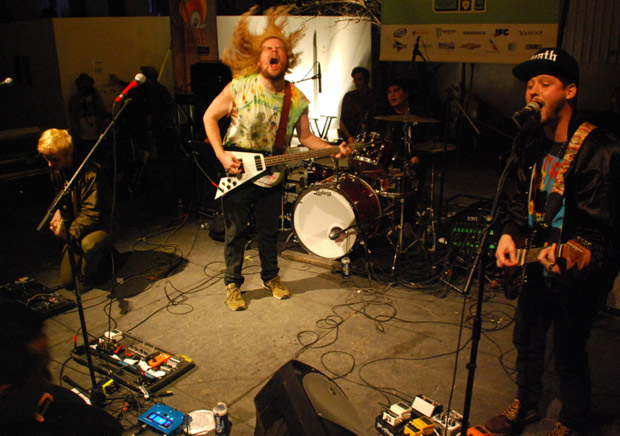 Photos of Wavves at 2011 Sasquatch! Music Festival in George, WA

Photos of Wavves at Music Box in Los Angeles, FL on February 24th, 2011 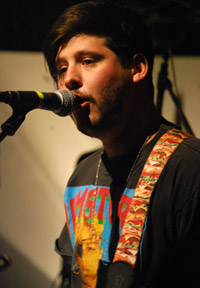 Of course the crowd went crazy from the get-go with the next act – this is Wavves, folks.  Beers were flung in the air (a shameful waste of alcohol…), frontman Nathan Williams’ mike was knocked out many times, but security kept it to only to a problem, not a calamity.  And it’s great to see him steady with his rest-of-the-Wavves, who were previously the backing band for the gone-to-soon Jay Reatard (QRO photos) – and great to see Reatard’s backing band land on their feet. 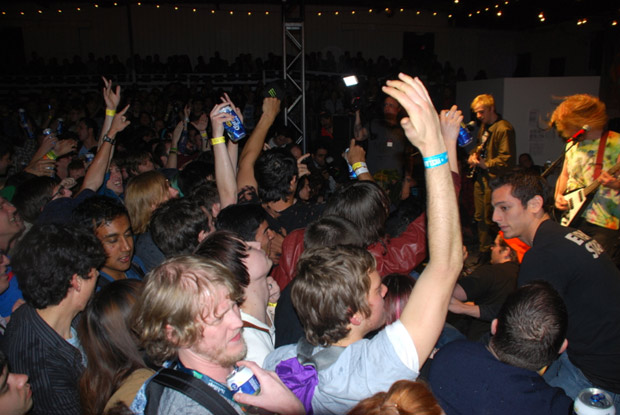 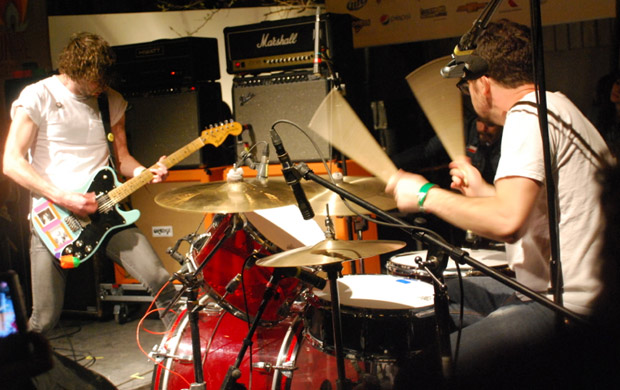 “Do we have something to live for?  Of course we do!”  One band was sure to catch at South-by-Southwest 2013 was Japandroids – they had QRO’s #1 album of last year (QRO Top Albums of 2012), Celebration Rock (QRO review) – which was also Ted Chase’s own #1 album (QRO Contributors’ Lists). 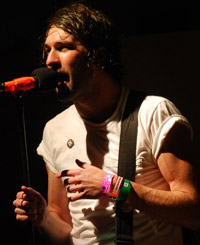 Security was in force from the start – but Japandroids singer Brian King called them off after the first song.  Yet world didn’t end.  Admittedly, King could have perhaps at least thanked the unhappy-looking security for their hard work, but they weren’t getting paid to be happy.

Naturally, the crowd (& band) did rock.  If Wavves is all frothy chaos, Japandroids has the deep inner well. 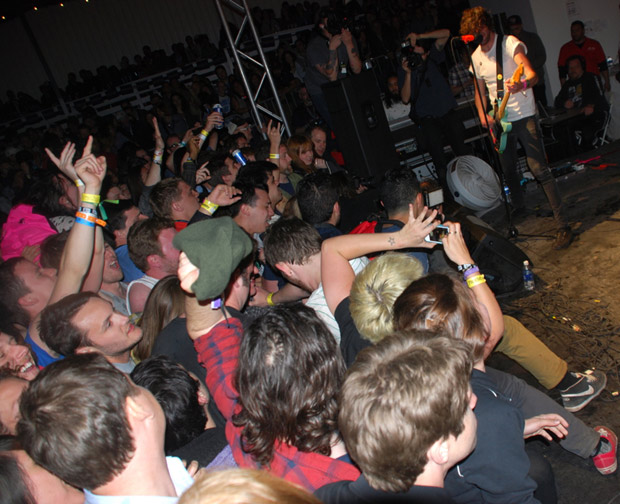 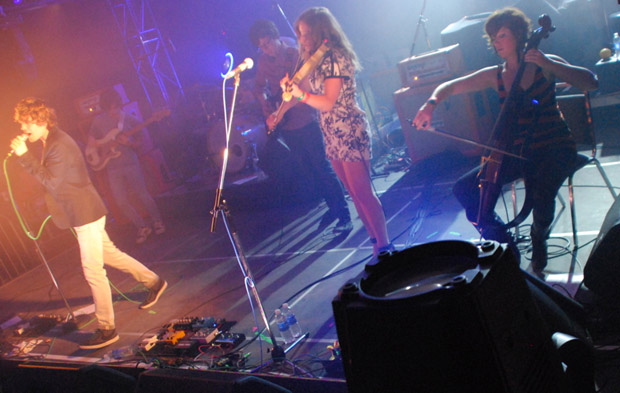 Japandroids was only playing two shows at SXSW ’13, and the other was Wednesday’s badges-only show opening for Iggy & The Stooges, so Ted Chase had to catch them at VICELAND on Tuesday – and thus risked missing QRO favorite Ra Ra Riot at The Syndicate’s ‘Conflict of Interest’ party at Hype Machine’s Hype Hotel.

RRR were playing a lot at SXSW ’13, but still left VICELAND to see them on the first night.  It took seemingly forever to get in, but it might have just felt that way because had to pee the entire time (that free VICELAND beer…).  Only caught a bit of Ra Ra Riot, but it was still clear that they were making everyone happy. 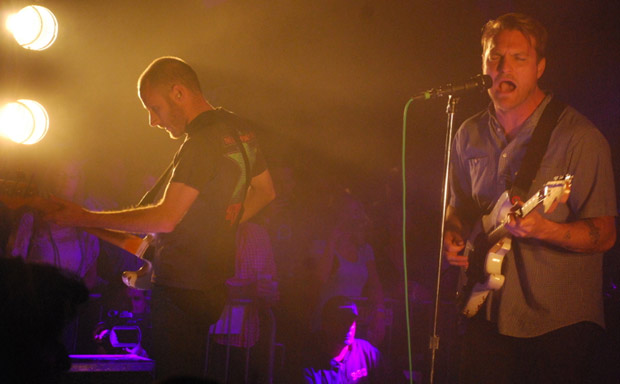 There were also free drinks at Hype Hotel, but some extra credentials needed to shoot from the pit (couldn’t really understand the security guy, next to the speaker).  Still managed to negotiate some shots, if only because other photographers blazed the way & security was busier with the crowd.  Cold War Kids sounded alright, but it had been a long day & night, and it was time to collapse.

-Always fun running into music industry people you know who are on the same New York-to-Austin flight as you for SXSW – even if they end up pitching you their events (Ted Chase was sitting next to two PR people from The Syndicate on his flight).

-Also neat that even the airline check-in people know that it’s South-by-Southwest.

-Famous last words of SXSW after missing an act you wanted to see, “[X act] are playing a lot of SXSW shows, so certainly will catch them…” – and then never do…

-Avan Lava (QRO live review) @ Clive Bar.  Went for the free drinks during the light day, but line meant only got in after Avan Lava had just ended.  And the free beer was from a bunch of taps on the other side of the bar that were hard to read – so asked for one, which was out, asked for the one next to it, which ended up being a terrible IPA.

-Tegan & Sara (QRO spotlight on) @ The Main, 11:35 PM – 1:00 AM.  iHeartRadio expanded from their NYC venue (QRO review) and Las Vegas festival (where Billy Joe Armstrong flipped out on stage last fall) to a South-by-Southwest showcase, headlined by Tegan & Sara.  But they were playing a lot of SXSW shows, so certainly would catch them…

-Divine Fits (QRO album review) @ VICELAND, 1:00 AM – 2:00 AM.  Left VICELAND before they came on for Hype Hotel, but the new group from Brit Daniel of Spoon (QRO live review) and Dan Boeckner of Wolf Parade (QRO live review) are from Austin and were playing a lot of SXSW shows, so certainly would catch them…