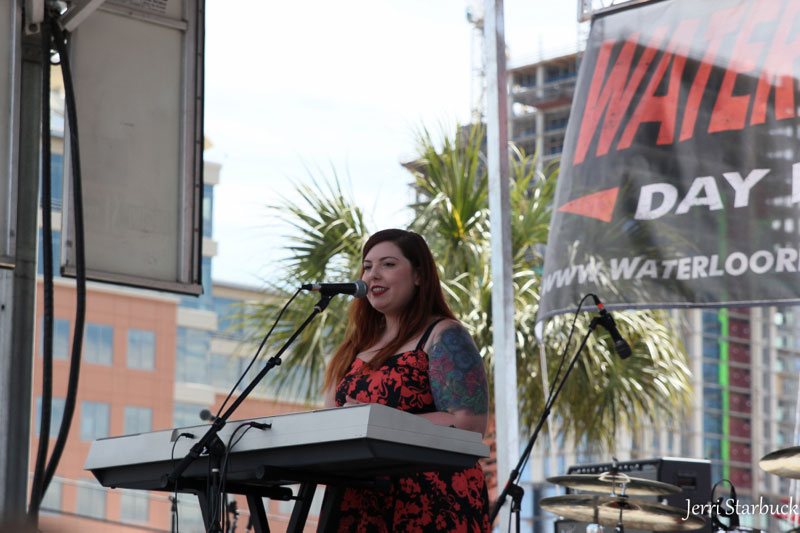 Waterloo Records always throws some nice daytime shows on the west side, and QRO caught Mary Lambert there. 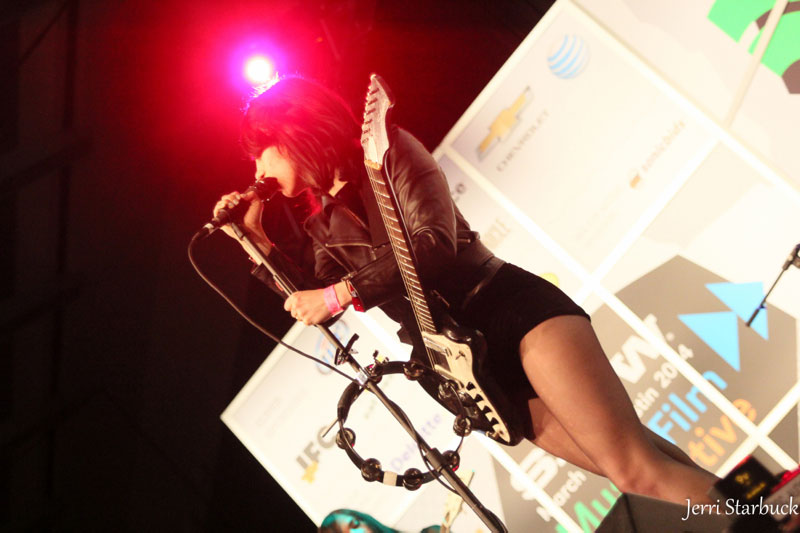 One of the few official daytime events is at SXSW central, Austin Convention Center, which hosted Dum Dum Girls performing off their new Too True (QRO review). 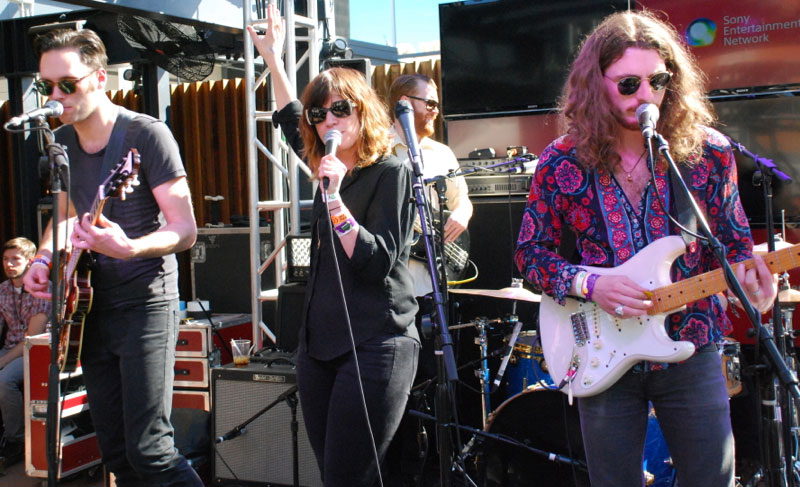 After missing Nicole Atkins the prior day, made sure to catch her – this time on a rooftop for SONY.  Of course the girl looked amazing as she played off her recently released Slow Phaser (QRO review).  For some reason there were lights on the sun-bright stage, which Atkins joked, “Can we kill those lights?  ‘Cause they’re killing me…”  She also tried to explain Phaser’s “It’s Only Chemistry, but that’s about as hard as explaining actual chemistry. 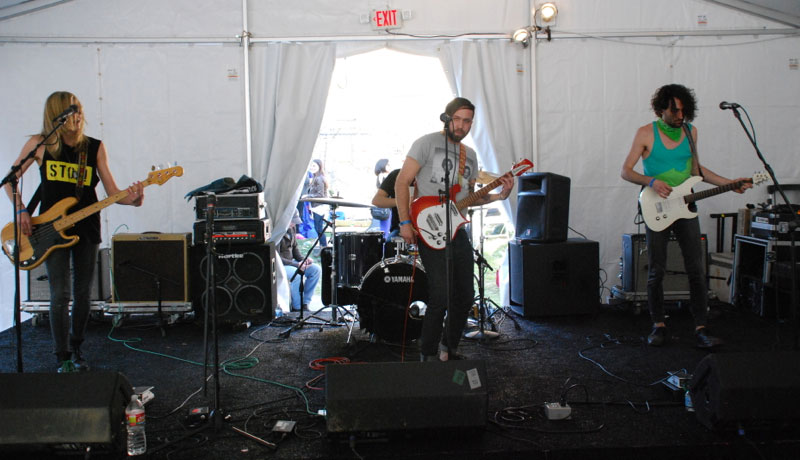 Swinging past the Convention Center, stepped into Brush Square Park for the showcase there by Boston’s acclaimed Berklee College of Music.  Caught a late add to the showcase, but one many New Englanders have been talking about, the punk-garage Field Effect – as well as running into Pat Sansone yesterday/that night’s (see below) The Autumn Defense.  Always nice to see artists from bigger acts at SXSW trying to catch smaller/younger acts (Sansone’s also in alt-country stars Wilco – QRO live review). 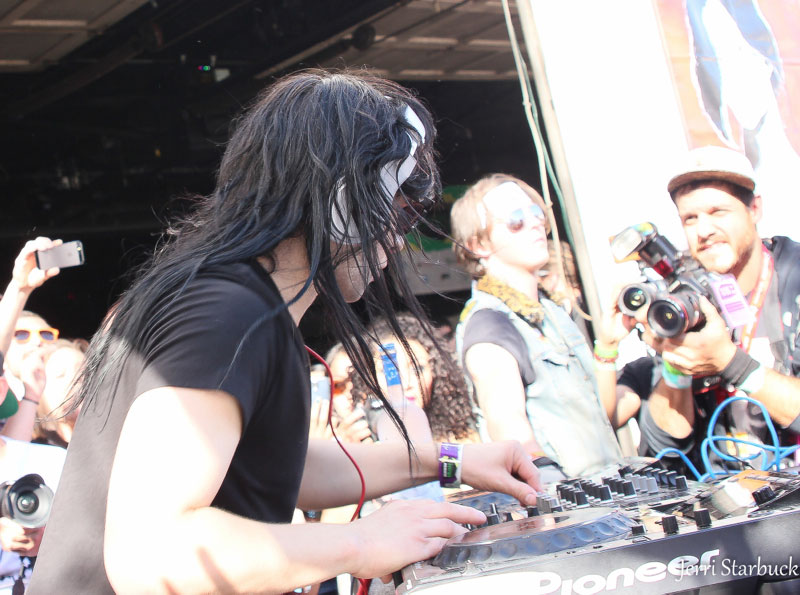 One of the biggest DJs in the world, probably the biggest American one, Skrillex brought the dub-step to a big day party.  He was mad skills, handling his Red Bull, cigs, lighter, beats, table, sunglasses, microphone… all with everyone and cameras in his face and he was havin a great time.  Impressive. 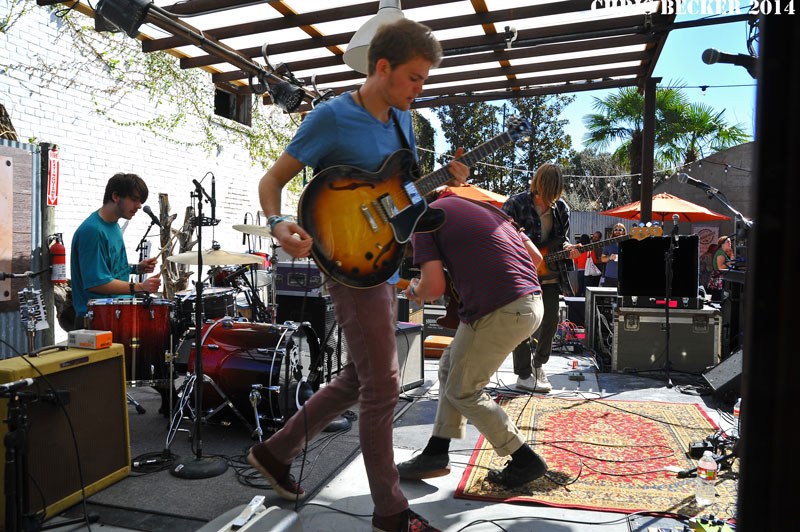 One of the best spots at all of SXSW was the Rachael Ray House, just on the other side of the highway on East Cesar Chavez.  In addition to acts like The Districts on the hour, there was not only free drinks (Blue Moon beer, both regular & summer wheat), but also free food – this is Rachael Ray, after all.  There’s surprisingly never enough free food at SXSW (should be more, considering that it’s in Texas…), and you need something to offset the drinkin’, so Ray provided with free gourmet hot dogs & sliders. 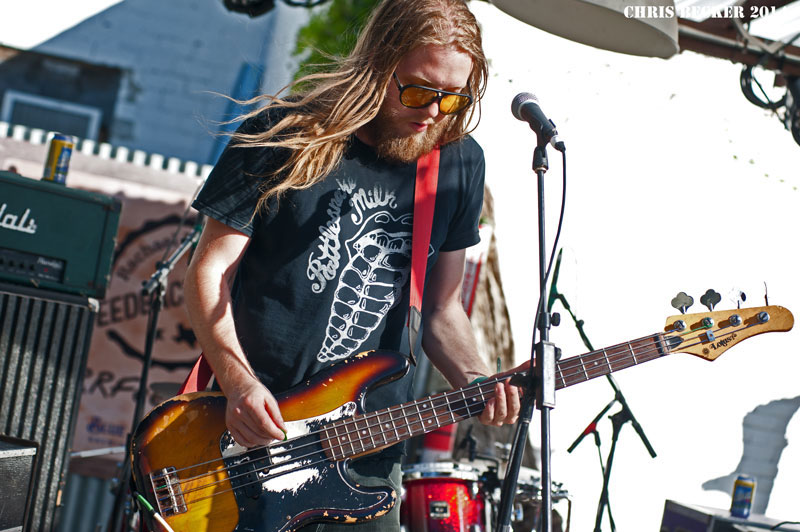 Only problem with Rachael Ray House?  No internet reception, so couldn’t tweet about the gritty country-rock of Natural Child until after leaving. 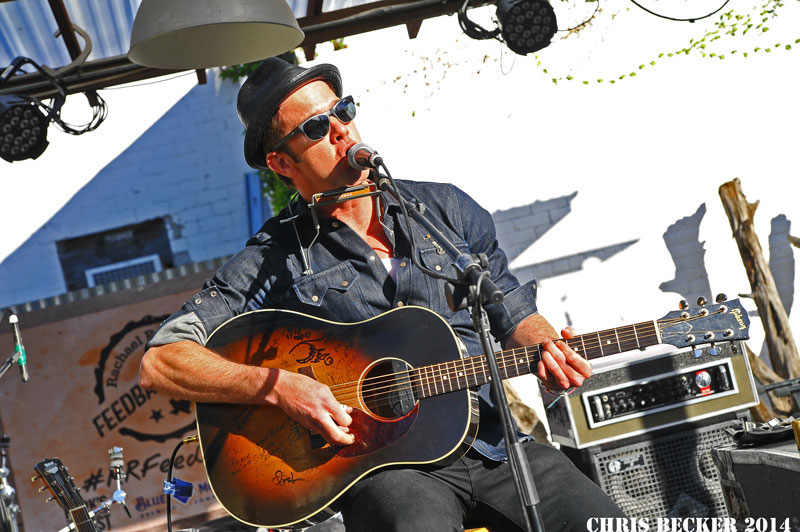 And wasn’t going to leave until catching G. Love.  Playing solo, without his Special Sauce, yes, he’s kind of Jack Johnson-y, but spicier (even without Sauce…). 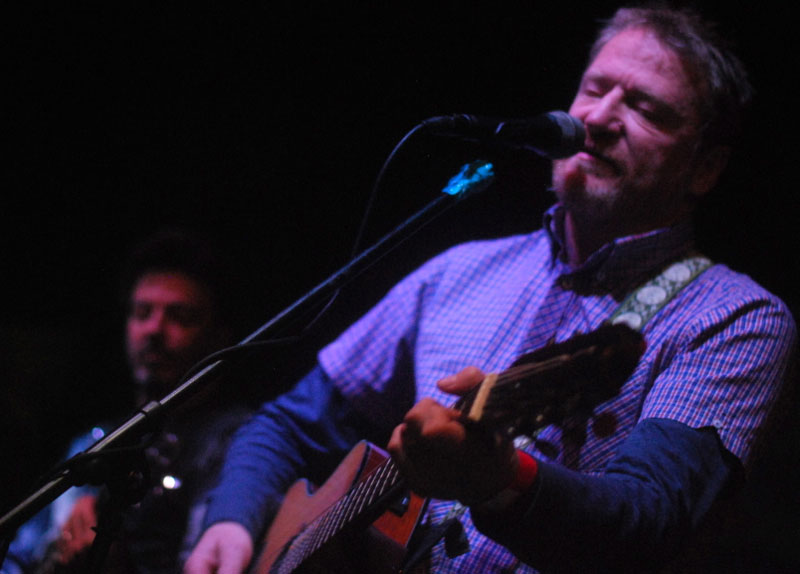 No, didn’t really need to catch the ironic alt-country of Cracker – they’re hardly a ‘new band’ – but Johnny Hickman (QRO interview) & David Lowery (QRO interview) are always welcome.  It was just the two of them, playing for a musicians lobby Copyright Alliance.  Lowery has been particularly involved in (and vocal about) musicians’ rights, including over the file-sharing issue, but he still kept his humor, joking that, while if you took a selfie hashtagged “#artmatters”, you’d get a free drink, but if you didn’t take a selfie, those at the D.C. lobby-sponsored event, “Will be thrown in front of a train…”

They only did four songs, old hits “Low” & “What the World Needs Now”, plus one from Gentleman’s Blues and the newer “One Fine Day”, but the crowd decidedly wanted more.  Of course, who couldn’t want more of Hickman playing to the crowd with his guitar solos – and all of his funny faces?… 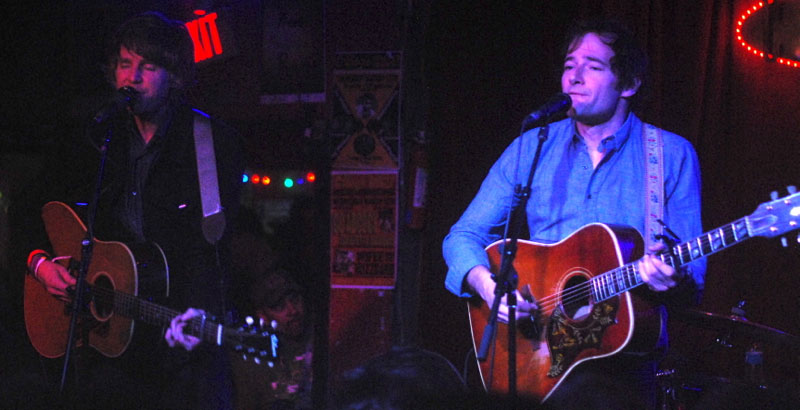 One of the few official venues at SXSW south of Lady Bird Lake is Continental Club, and you’d think that the long walk (admittedly a deceptively-looking walk on a map) would mean that the place would be sparsely attended – but on Wednesday night, you’d have been wrong.  Yep Roc Music Group brought The Autumn Defense to the place, for the second day in a row for the band of an at-capacity crowd.  The line wasn’t long, but the small place was at one-in, one-out, so ended up seeing most of the set from outside the doorway (and had to deal with one aggravated badge-holder saying that your correspondent wasn’t in line/should be behind the badge-holder…).

It was another older crowd, and The Autumn Defense sounded sweet playing off of their new Fifth (QRO review), but couldn’t match their sun-shined set from the prior day. 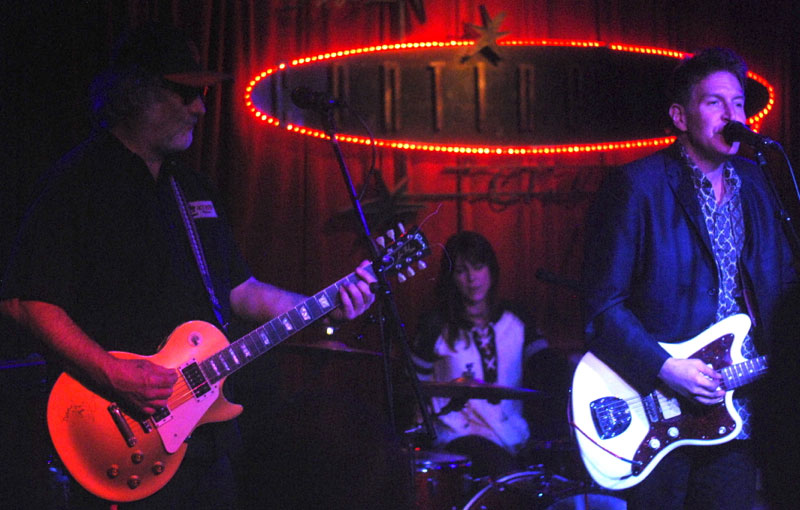 There’s nothing like realizing that a star that you’ve long loved just walked past you, and your correspondent had that when he rubbed shoulders past Mike Mills of R.E.M. (QRO album review).  The greatest alternative band in the world may have called it quits, but they’re all still working on other projects, such as The Baseball Project, a super-group of musicians singing songs about the national pastime.  Though missing from the line-up that night was fellow ballplayer/R.E.M.er Peter Buck – and of course Mills was playing bass on the dark side of the poorly lit stage.

Whatever – The Baseball Project were just great.  Such a concept could have been incredibly limiting, but they’ve got a couple of albums already (with a new one coming soon), and baseball has a rich history to mine for the group, which also includes Steve Wynn (also of YY), Scott McCaughey (also of The Minus 5 & more – QRO interview), and XX (also of ZZ – and kudos for a rock band singing about an all-male sport having a kick-ass lady on skins).  They don’t just sing about the superstars (though of course they had a song about A-Rod, even joking how loved he was locally from his ‘long tenure’ with The Texas Rangers…), but also players who aren’t Hall of Fame-bound, like Dale Murphy – though that was in a really catchy song demanding Murphy be in the Hall.  They did seem to have a lot of songs about seventies-era baseball (like the “motherfucking Oakland A’s”) – perhaps that’s when they were kids & first fell in love with the sport. 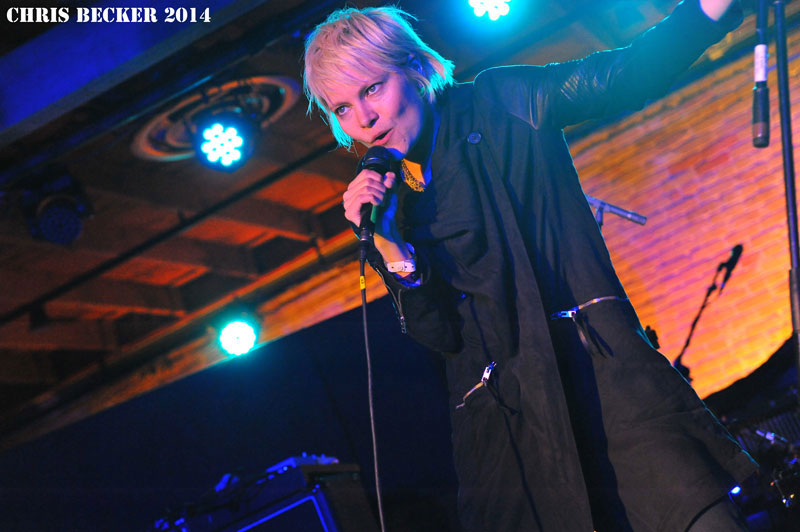 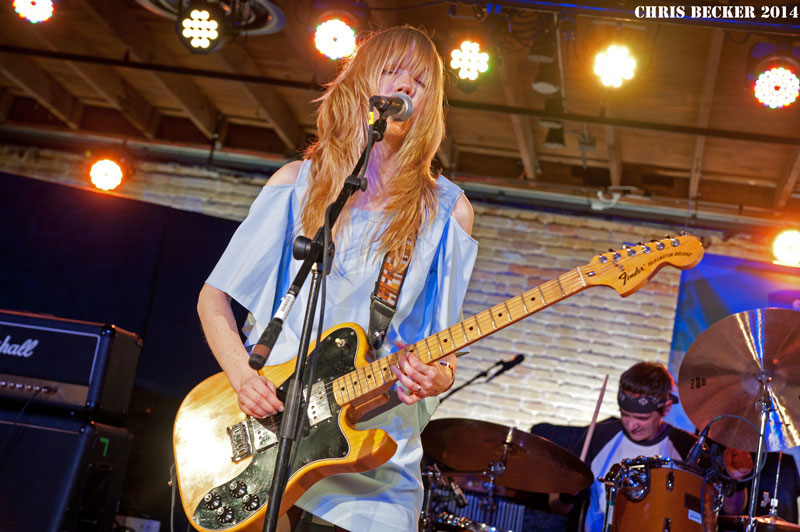 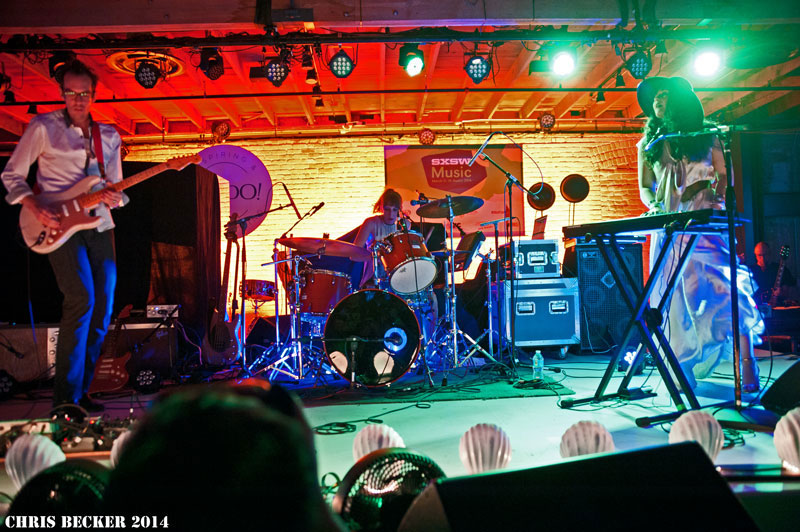 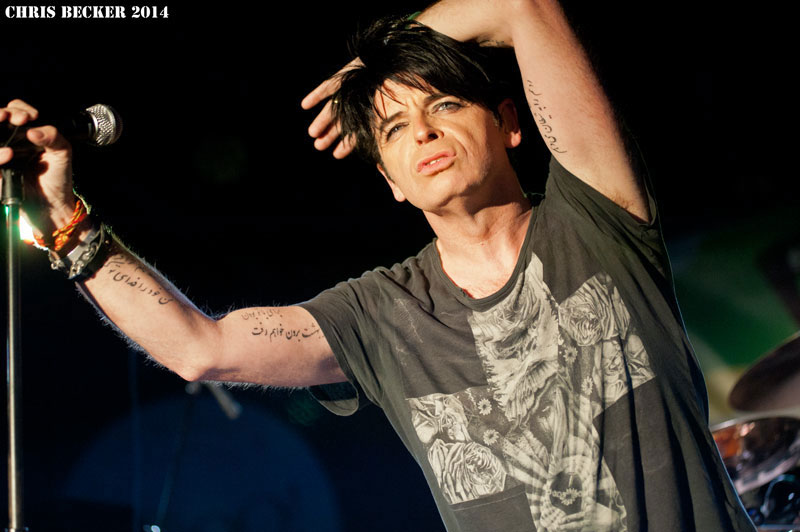 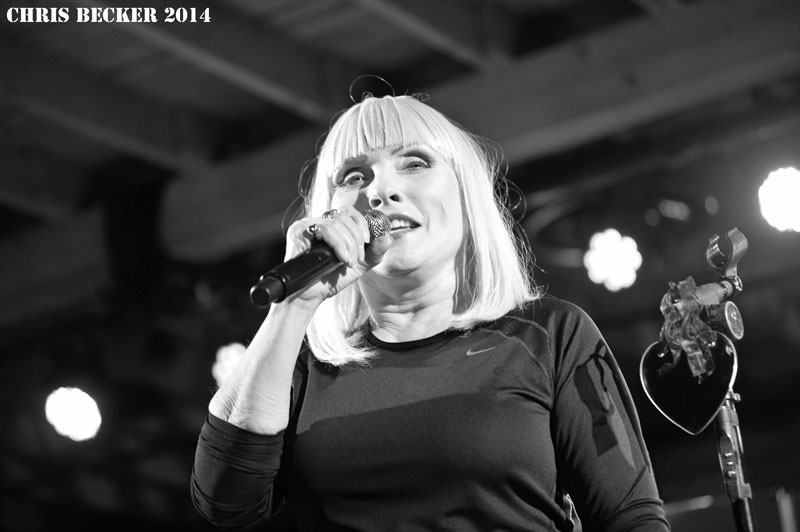 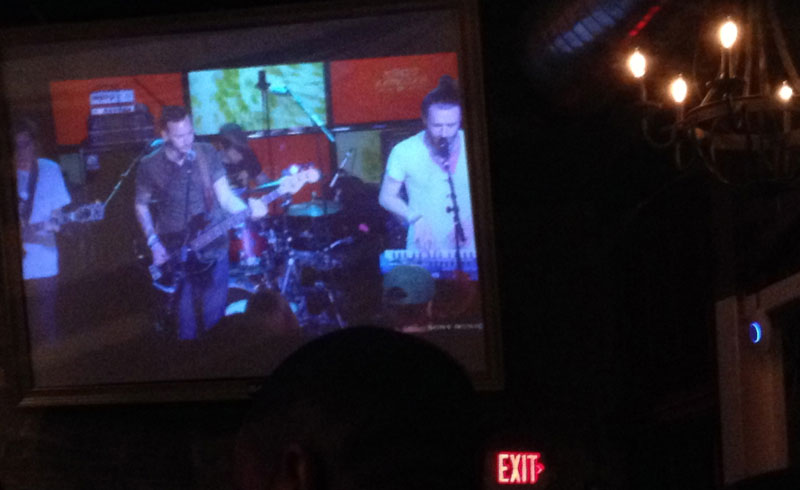 Two words: rooftop capacity.  The place that had been so easy to enter, early in the day (see above), was completely packed for Bear Hands in the evening.  There was a line down the stairs for the tiny rooftop, so ended up just seeing on the big screen downstairs – QRO had caught our favorite just a couple of weeks earlier, at home in Brooklyn (QRO photos). 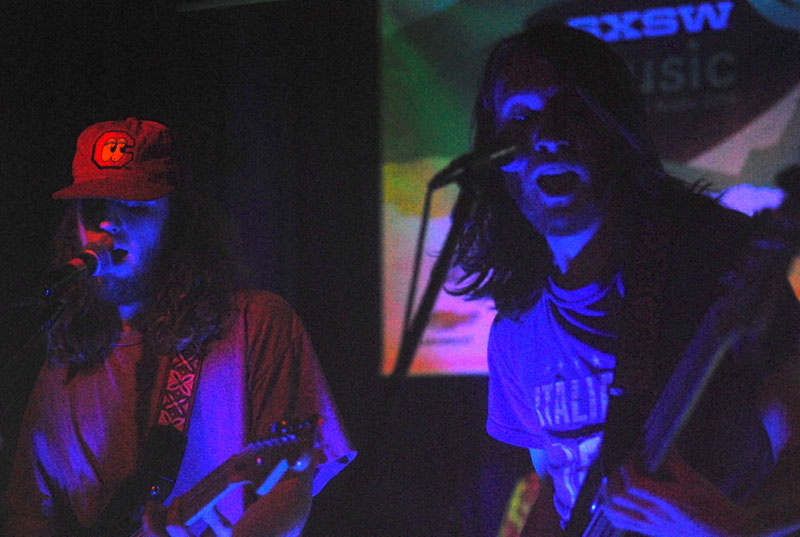 By this point, being able to sit down was kind of the biggest thing one was looking for, and luckily there were seats at comedy club The Velveeta Room, to rest & hear country psych-rock of New Madrid. 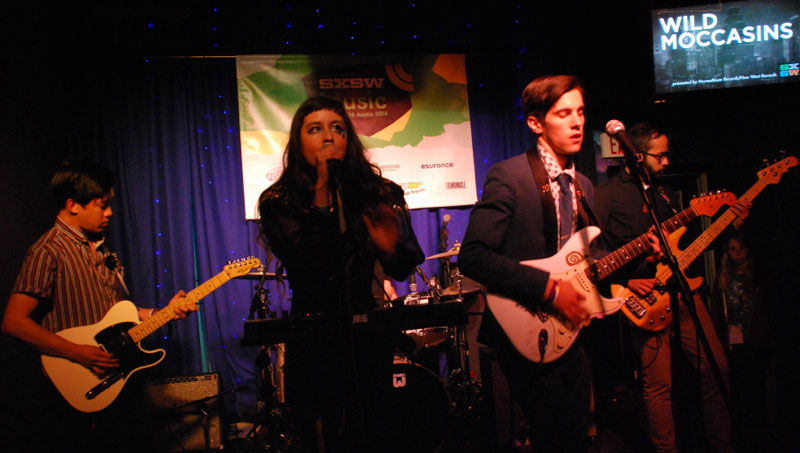 This close to Houston, have to catch QRO favorites Wild Moccasins – first met them at SXSW way back in 2009 (QRO recap).  They’re older now, and no longer do you feel creepy for thinking front-couple Cody Swann and Zahira Gutierrez are attractive…

They’re also wiser, and were able to pull off what was one of the hardest jobs at SXSW ’14 – the festival had asked all the Thursday evening showcases to have two minutes of silence at midnight for the two people killed the prior night (the third victim had not yet passed away at that point).  The sound guy was particularly adamant about the hush, getting everyone in Velveeta to quiet contemplation (though you could still hear chatter from out on Sixth Street).

Swann closed the two minutes by saying, “Not gonna let one asshole ruin things,” and the group kicked into high gear.  There’s more rock to them live than on their more disco-oriented new 88 92 (QRO review), and Gutierrez in particular has a hell of a stage presence (and at regular music venues, the stage is higher so you can see the short girl even when she stands, as opposed to just when she jumps). 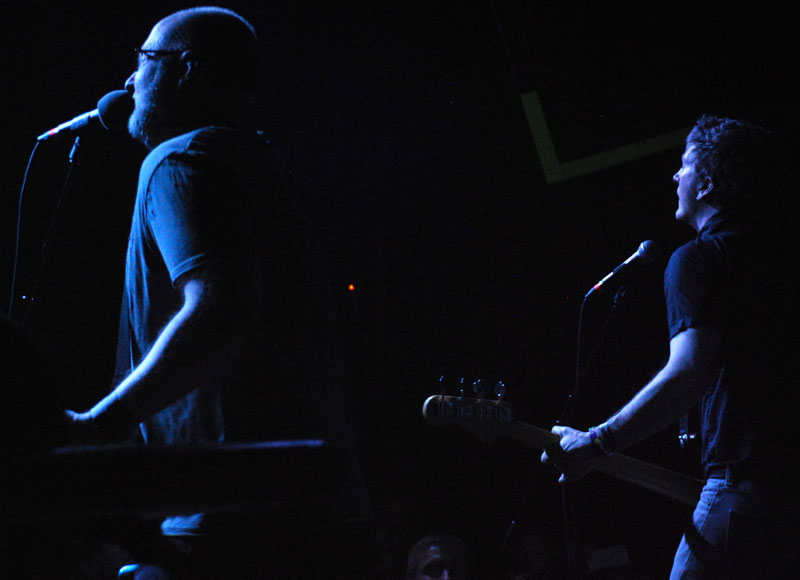 Could it get better than having Mike Mills walk past you (see above)?  How about watching Bob Mould jump up and down mere feet from you while he was psyching himself up to perform.  The route past the stage to the backstage at The Parish is also the one to the bathrooms, so it’s easy to end up on the side, something your correspondent discovered at prior Merge Records showcases there (QRO recap).  It helped to know also-by-the-side-of-the-stage Brian Betancourt of played-earlier Hospitality (QRO album review), but couldn’t really talk to him while geeking out that close to Mr. Mould.

Unlike his set the prior weekend at City Winery (QRO live review), this was not a performance dedicated to the twenty-fifth anniversary deluxe edition release of his amazing Workbook (QRO deluxe edition review), but rather one showcasing his new material from this summer’s Beauty & Ruin, complete with bassist Jason Narducy and drummer Jon Wurster (also of Superchunk – QRO live review – the band that founded Merge).  The new stuff seemed harder hitting – definitely not the acoustic Workbook, but more of an attack than solo follow-up Black Sheets of Rain.  Actually, it was kind of akin to the more straightforward Hüsker Dü (QRO spotlight on) material – “Chartered Trips”, not “Reoccurring Dreams”.  Mould & co. did play some older songs, like “Trips”, and it was particularly neat to see how Narducy & Wurster were into even the old stuff that they had no hand in crafting.

-South-by-Southwest did a great job of rebounding from the prior night’s tragedy.  Instead of shutting down even part of the event for the rest of the festival, only a couple venues right next to the scene of the accident had to be closed – and then it was only for the day showcases, as Mohawk and Cheer Up Charlie’s were open that evening.

-Tokyo Police Club (QRO spotlight on) and Small Black (QRO album review) @ Cheer Up Charlie’s, 6:00 PM.  The entire Death & Taxes daytime party at Cheer Up Charlie’s was cancelled due to clean up still happening on the street in front of it from the prior night’s accident.

-Lady Gaga @ Stubb’s, 11:00 PM.  Yes, the one-and-only superstar Lady Gaga not only gave the keynote speech at SXSW, but also played an intimate (for her) show at Stubb’s – and the only way to get was to complete a Doritos ‘Bold Mission’…

-Dawn Landes (QRO spotlight on) @ Victorian Room at The Driskill, 1:00 AM.