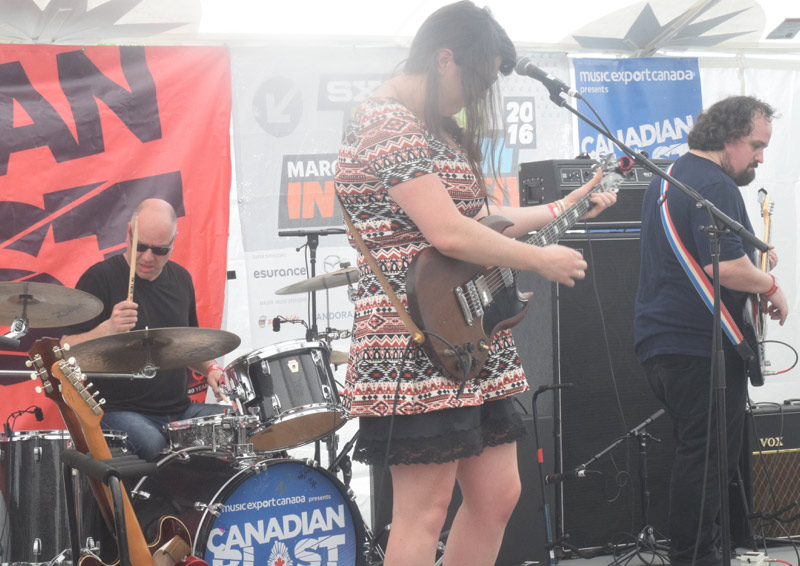 Just as Wednesday starts of SXSW Music proper, a great way to start off SXSW Hump Day is at the Canadian Blast BBQ. Unfortunately the brisket and burgers were all gone, but the sausages were great.

On stage was Terra Lightfoot, playing a country-rock reminiscent of Austin-by-way-of-Ohio Erika Wennerstrom (of Heartless Bastards), but Canadian. 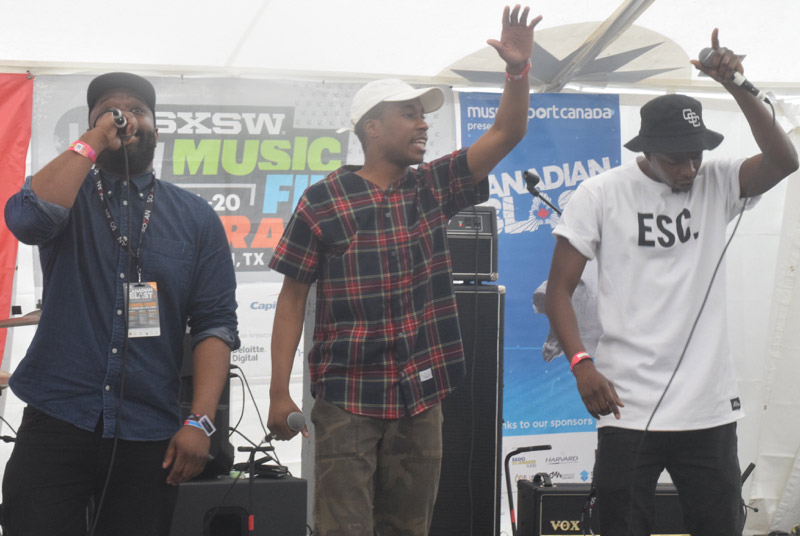 These “pierogi-eaters”, The Lytics, hailed from western Canada, with a positive hip-hop that is so hot these days. 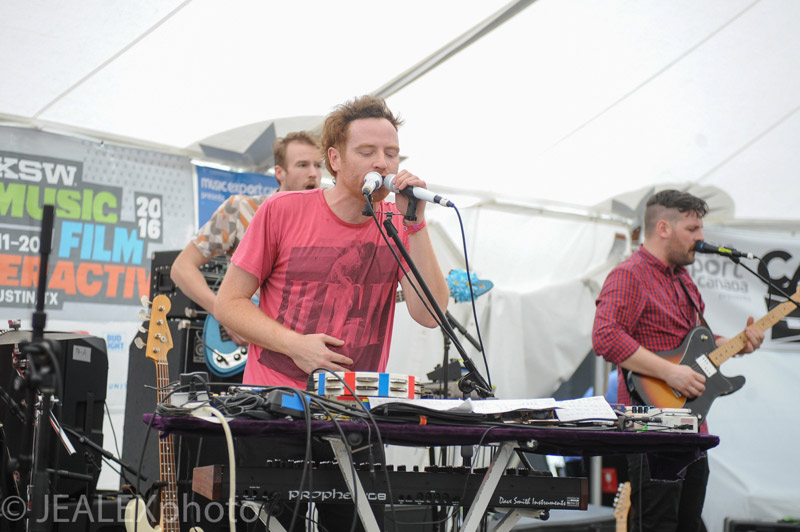 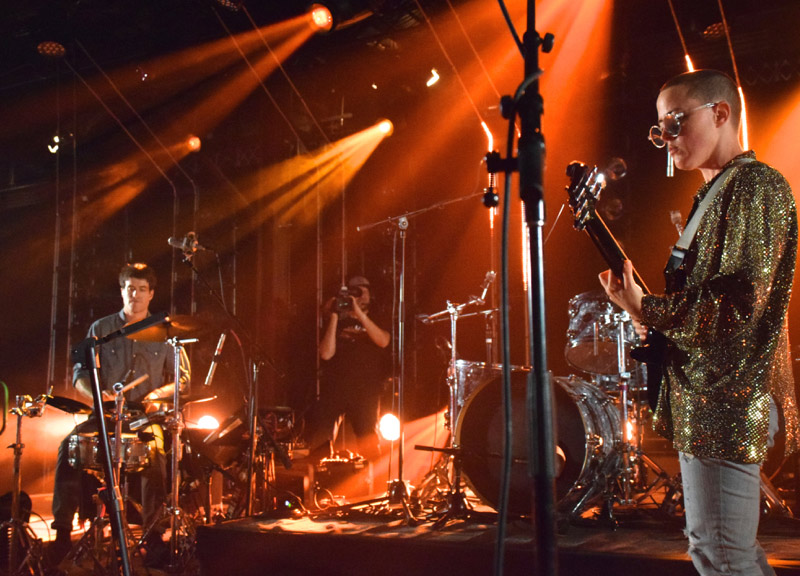 This group was down to just two members, possibly just for this string of SXSW bookings, but they didn’t sound reduced (though main woman Jana Hunter has shaved her head). Lower Dens’ moody indie-rock still did have some electronics. 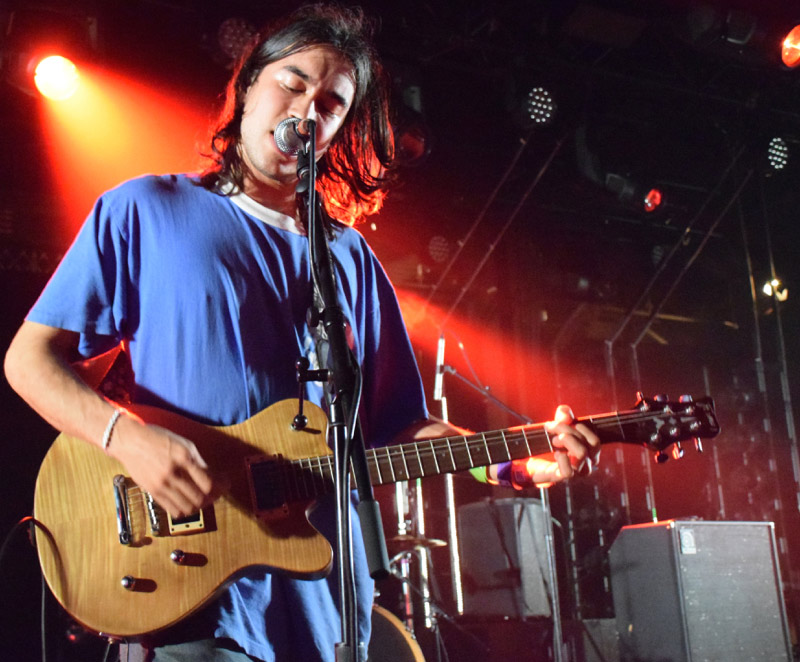 More moody indie-rock at Hype Hotel from Alex G, though this time with some garage-pop. 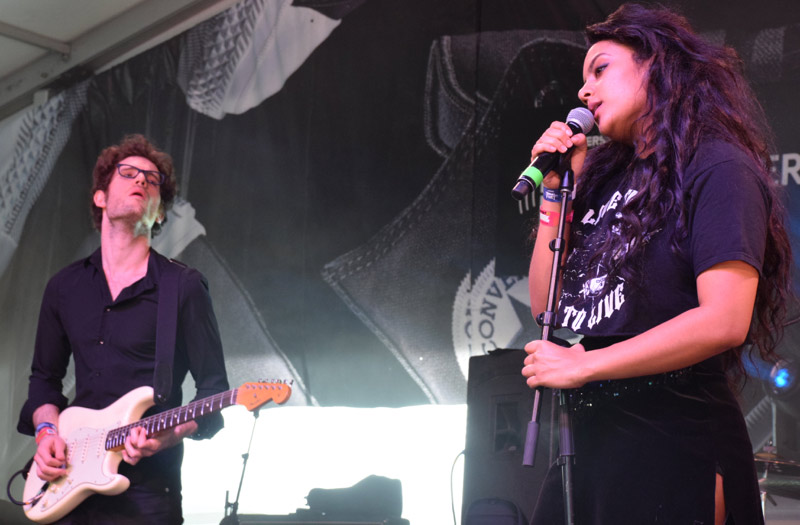 Charming young songstress Bibi Bourelly was just signed to Def Jam Records, and was particularly evocative with her hands. 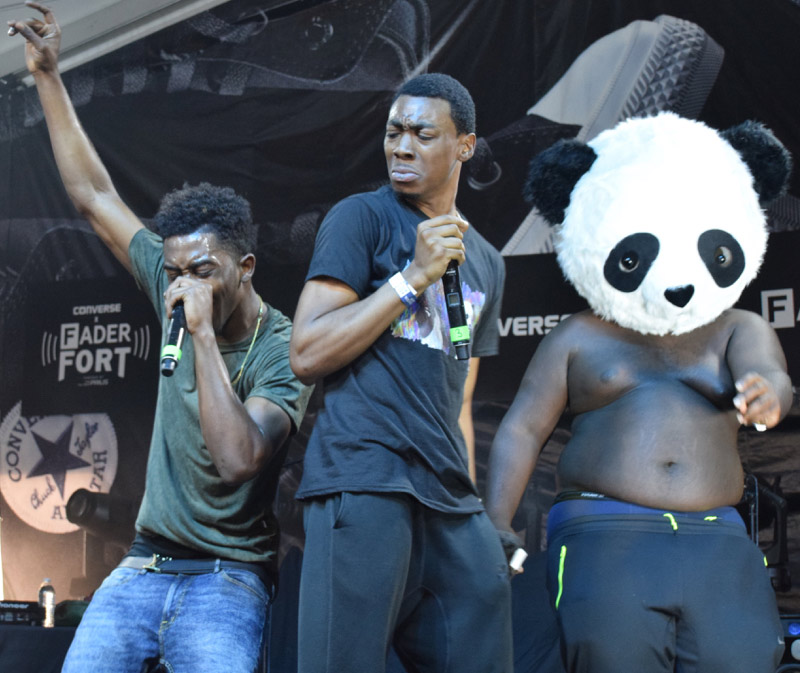 Recent G.O.O.D. Music signee Desiigner was introduced by none other than label head (and well-known rapper) Pusha T, who was also in the photo pit to watch his boys. They were giving it their all on stage, psyching the crowd, giving funny faces, and even bringing on a shirtless man in a panda head. “When I say, ‘Gay,’ you say, ‘Panda!’” 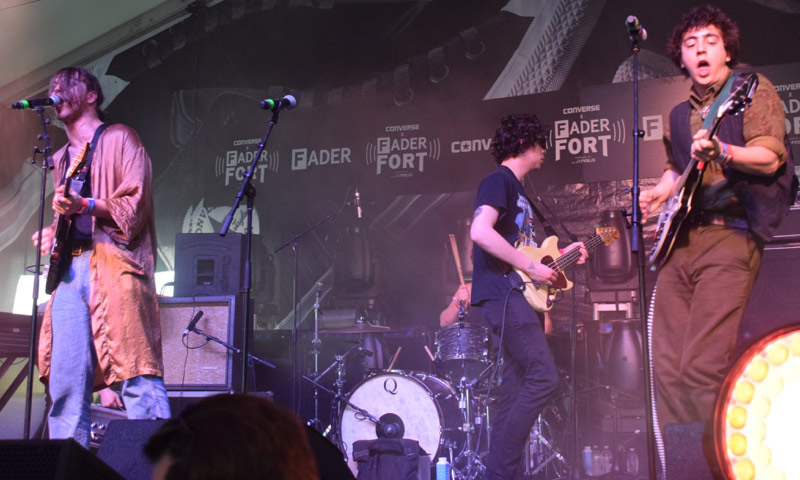 FADER Fort has always had some serious genre shifts, but not shifting in energy or antics were Twin Peaks. Their garage was a wild rockabilly party, with multiple singers, guitarist falling over, and “Fuck Donald Trump!” When the crowd cheered, added, “Thank you…” 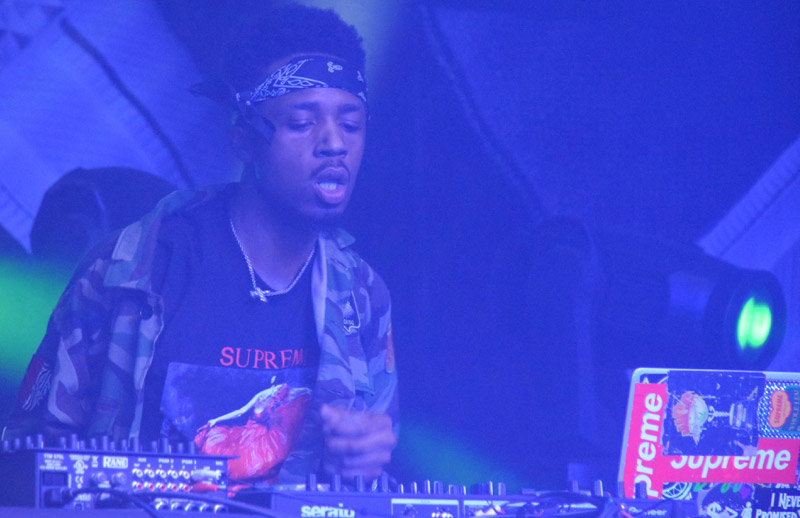 Topping the first day of FADER Fort was Metro Boomin. While better known for his producing duties (Kanye West, Drake, Future), he was strong on his own, plus DJ Esco and SheLovesMeechie. The crowd was also into it – not so much security, which all of a sudden got heavy-handed, despite no problems before that. 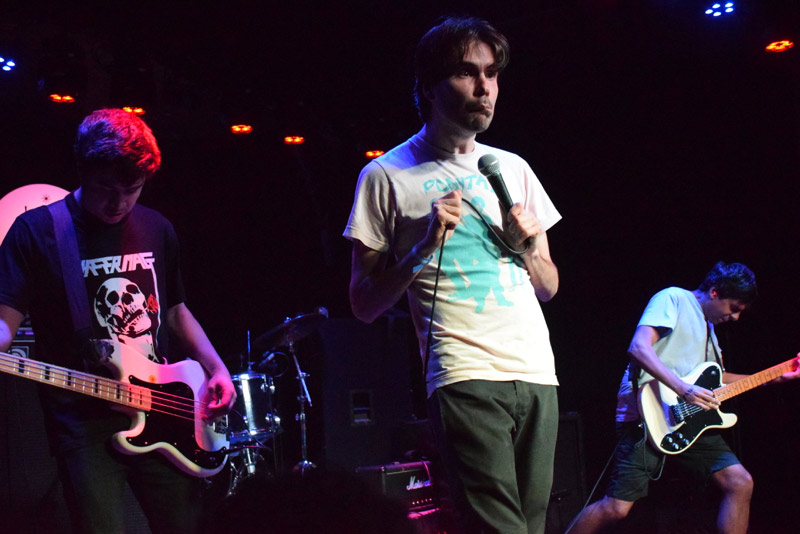 With an art-heavy sound and funny faces, BIG UPS were actually brought to mind the more skillful straightedge hard-core of the eighties (though with a sense of humor).

House of Vans showcase @ The Mohawk 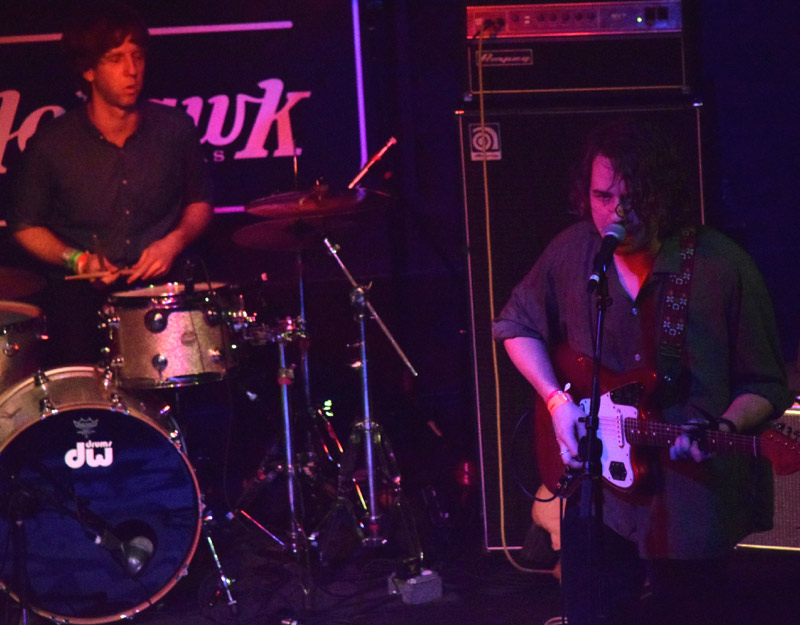 Vans Shoes is celebrating its fiftieth year (!), and in addition to a show that night at Brooklyn’s House of Vans with Nas & Yeasayer (QRO photos), they took over The Mohawk for SXSW.

After huge lines at doors, including for VIP, was the cheery garage-pop of Kevin Morby. 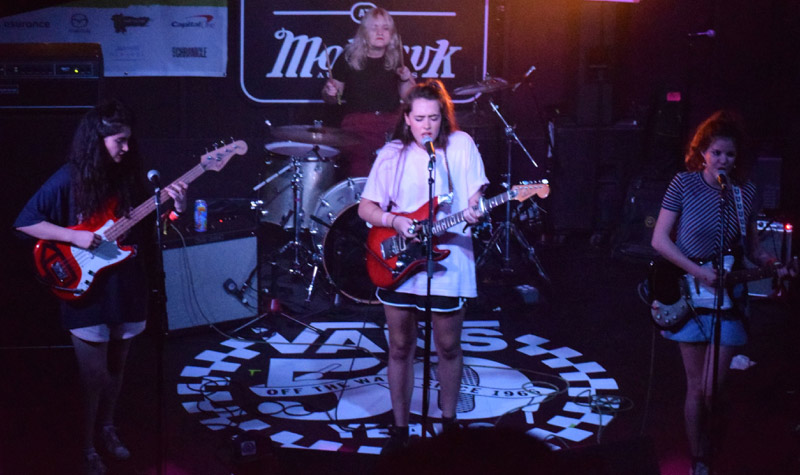 The girl-garage of Costa de Madrid’s HINDS might be over-hyped, but is still enjoyable and charming. 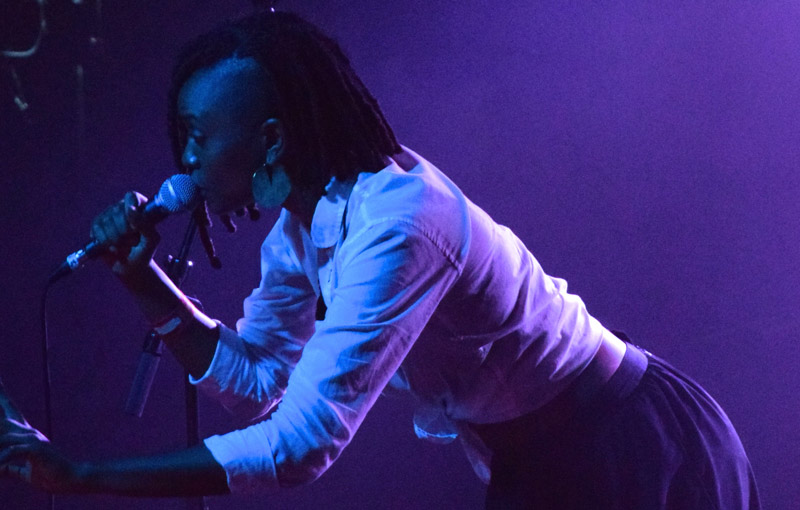 As massive lines returned on Red River Street for The Mohawk, Kelela took the stage. A strong songstress, she should have fit right in on the bill, but the crowd seemed a little unfocused at this point. 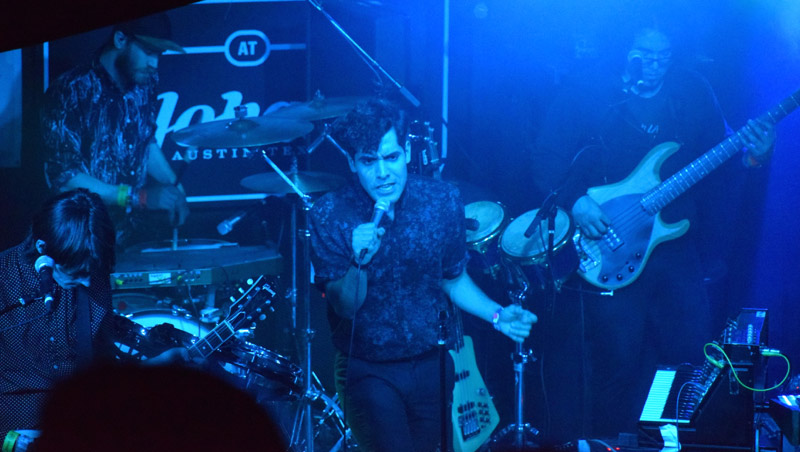 Gettin’ down at House of Vans was Neon Indian, with strong disco-tronic, upbeat sounds. He was also able to fit his whole crew on stage & on time, not easy at what was probably by this point a small venue for him. 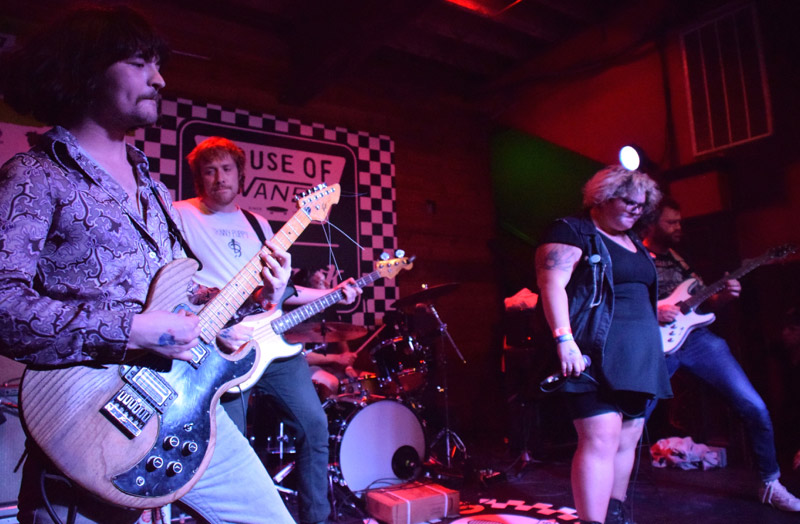 Inside at The Mohawk was the seventies garage-party of Sheer Mag, with charisma on their small stage. 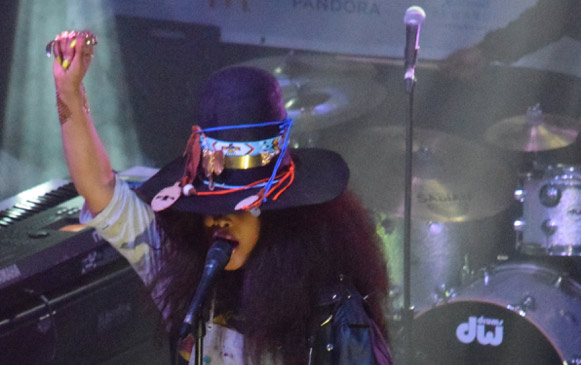 Not getting up on time at House of Vans was the headliner, Erykah Badu. You could probably have guessed that the big-name artist was going to need extra time to set up, wasn’t going to be on time – the 12:40 AM scheduled start time might have been set to give some wiggle room. But her band only came on a half-hour later, and Badu herself not until one-thirty. She had a great voice and great sounds, but many in the crowd were over it by that point (though that could have just been those who complained about being too important to wait on the long line…).

Still better than her show on Friday night at Austin Music Hall, where 150 people stormed past security to enter, and the whole place was evacuated.

-Nearly flipped my lid when the bartender at free drinks FADER Fort asked for a drink token, but that system was only in place until 5:00 PM, to cut down on the day drinkin’.

-VIP at The Mohawk was giving out free embroidered Vans slip-ons, but your correspondent couldn’t get them without any slogan embroidered at all…

-What do you do when someone blatantly cuts the entire bathroom line, and then pretends she didn’t when called out? Your correspondent’s hands were tied by the social contract, even if hers weren’t…

-Last year, your correspondent saw Darryl & Carol from The Walking Dead at House of Vans on SXSW Wednesday (Norman Reedus & Melissa McBride – QRO photo). This year it was only Nardwuar, but still nice to see him (QRO photos of him, with Andrew W.K., at SXSW 2013).

-Iggy Pop @ ACL Live at The Moody Theater. Playing special SXSW show on tour behind Post Pop Depression (QRO review), only select people got to cover. As opposed to the massive VIP line to see him three years ago at Mohawk (QRO photos).

-Ra Ra Riot (QRO spotlight on) @ 3TEN Austin City Limits Live. QRO favorite playing brand new venue, but one look at the line for Mohawk for Erykah Badu, and was not going to try to leave & come back…