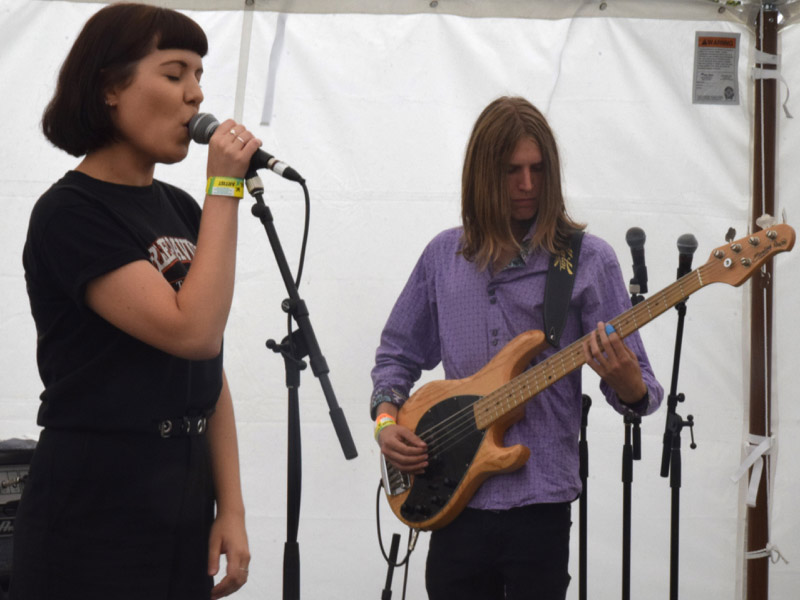 While getting some bratwurst off the barbie, caught soul singer WILSN, who started her set with a cover of “Heard It Through the Grapevine”. 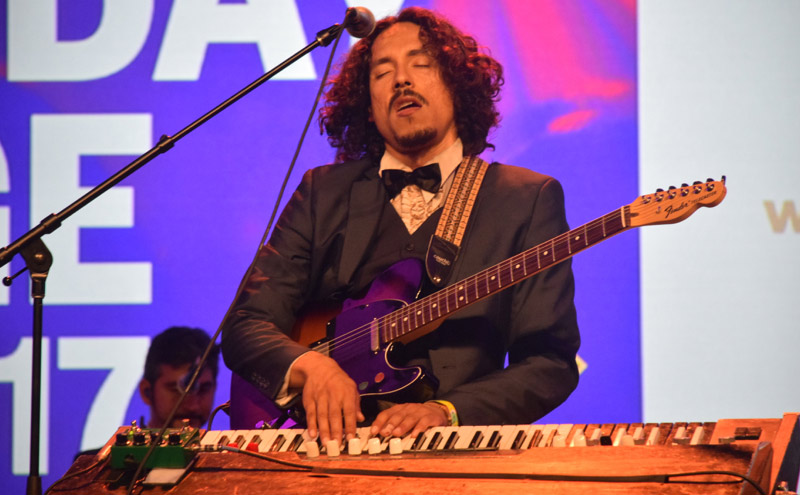 Chicano Batman have been getting a lot of hype over the last few years, and perhaps some of that is from their name (and the lily-white indie scene looking to add some Latin flavor), but their alt-soul had some great, enjoyable energy at the relaxed Radio Day Stage. 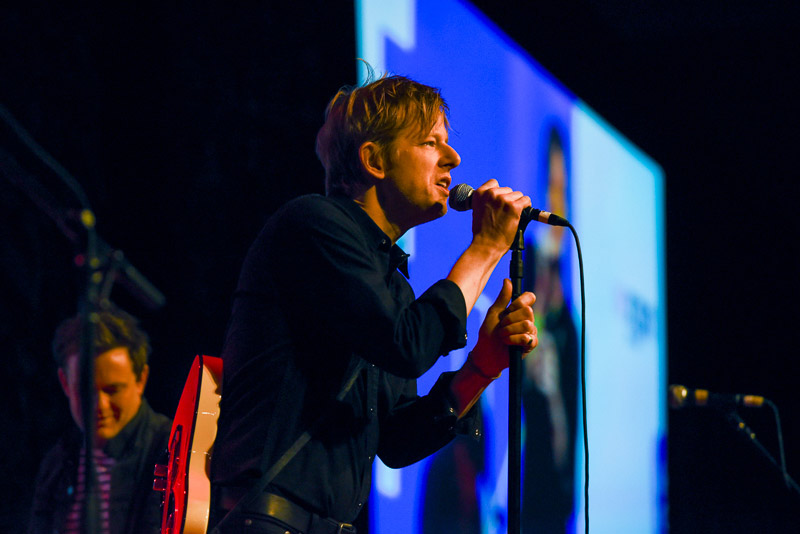 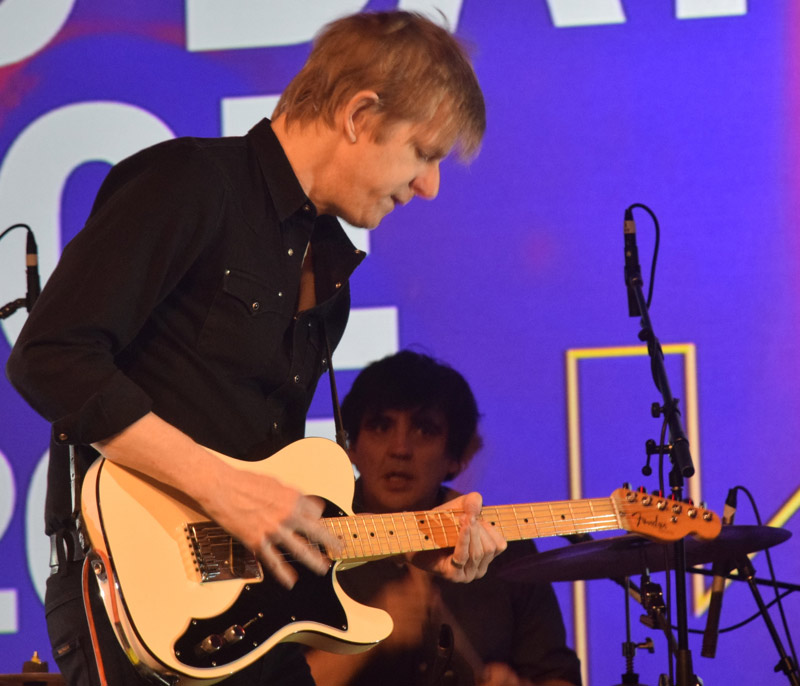 Between their size, local status, new album, and number of times playing, Spoon might have been the most must-see act of SXSW 2017. After three you-can’t-get-into nights at The Main, their set at the Radio Day Stage, inside the Austin Convention Center, was thankfully easy (large space, good lights and air conditioning will do that).

It was the release day for their new Hot Thoughts, and yes, they did songs off of it, but also older Spoon classics like “I Turn My Camera On”, “The Beast and Dragon, Adored” and others. The Hot pieces sounded very much like Spoon, as exactly they should. 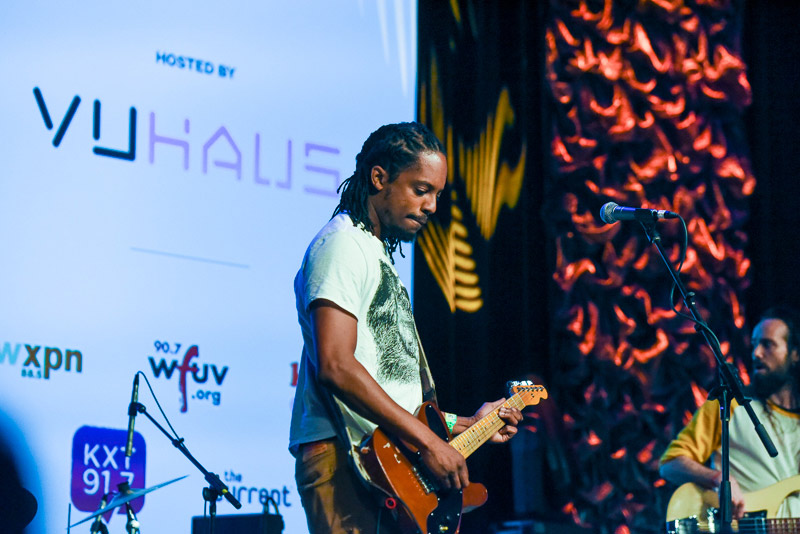 Another local playing the Radio Day Stage on Friday was Black Joe Lewis & The Honeybears.

The Frye Company party @ The Blackheart 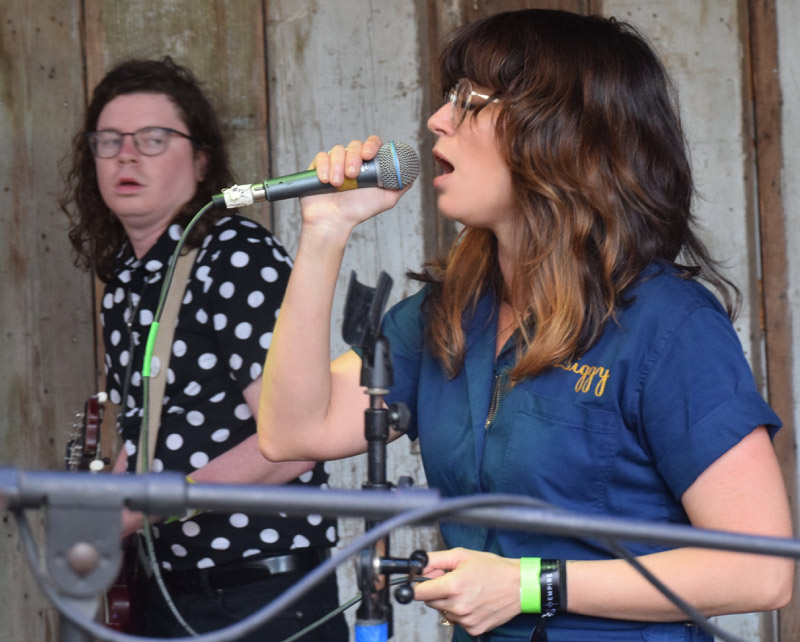 Leather goods business The Frye Company had their ‘Frye Day’ at The Blackheart, with a number of great names. Nicole Atkins had long seemed either on the verge of stardom or quitting music, but by now she seems much more comfortable in whom she is. Working on a new album, she was still the very seventies blues-rock woman that she knows well. 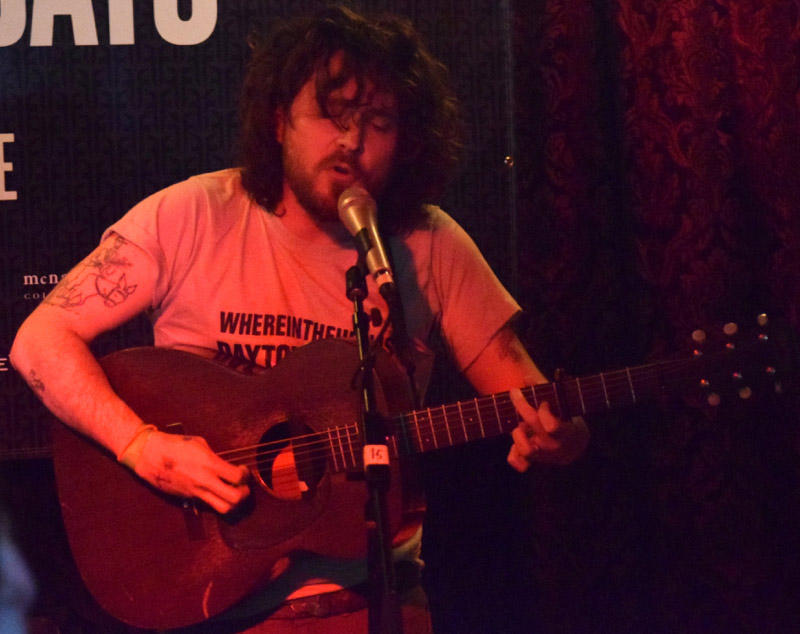 Inside at The Blackheart might have been tiny, with the inside stage bleeding over into the bar area, but was a nice fit for Christopher Paul Stelling. His backwoods finger-plucking folk is very authentic, whether solo or joined by fiddle & upright bass. 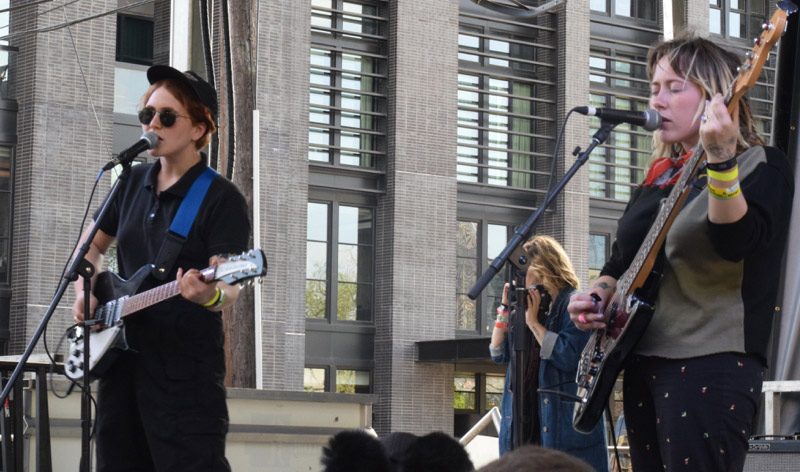 One of the many day parties Culture Collide were throwing on Rainey Street, Container Bar was at capacity for Girlpool. One of those young acts getting praise one should check out at SXSW, they were actually kind of noisy and screechy. Definitely saw younger bros leaving during their set (whether that’s a negative or a positive is up to you…).

Dams of the West 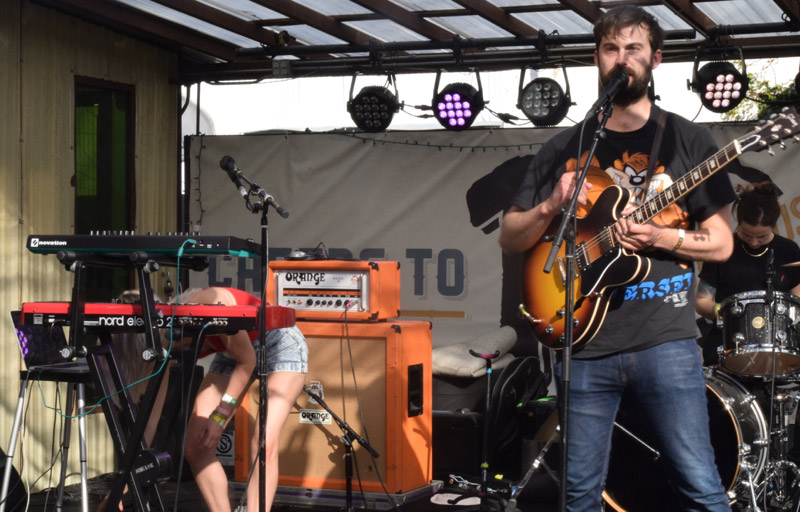 Made it to Rachael Ray’s Feedback House only in time to catch the tail end of Dams of the West, but enough time for free food & drinks. 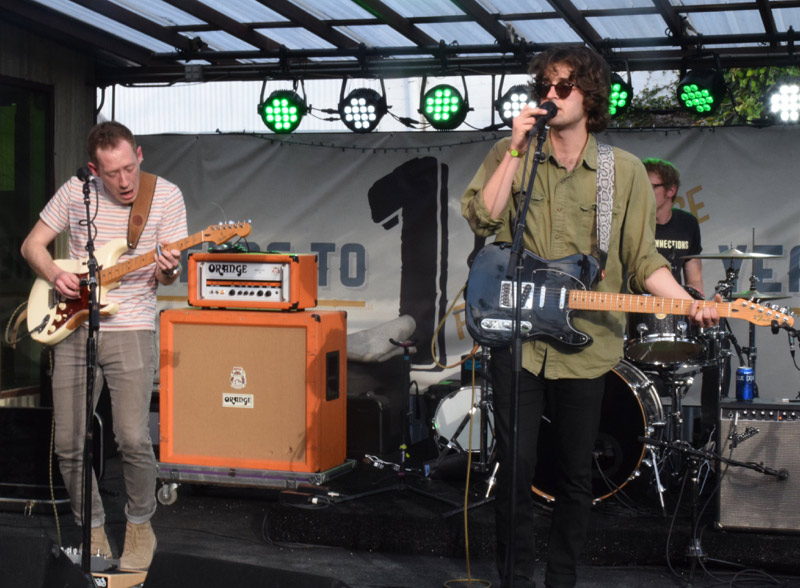 Gold Connections brought slightly pleading indie-rock that did get better as they went on, though back-up singer shouldn’t take lead. 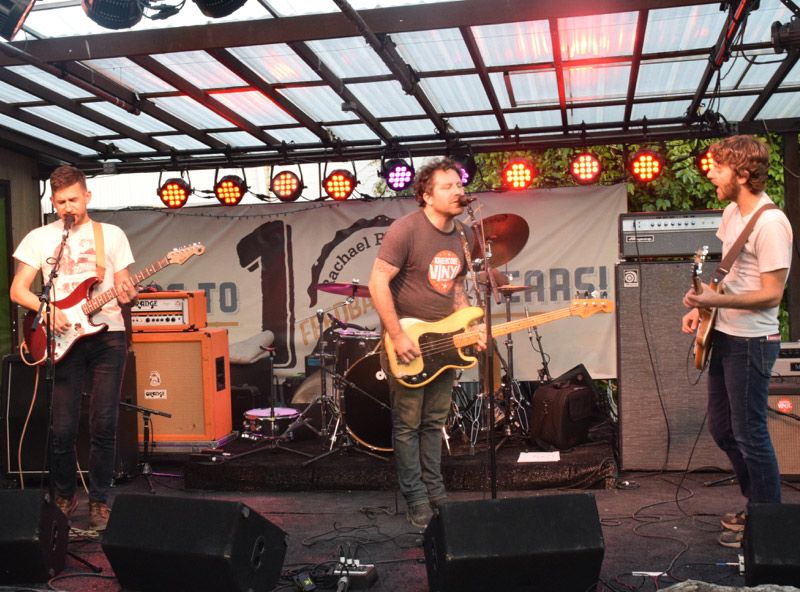 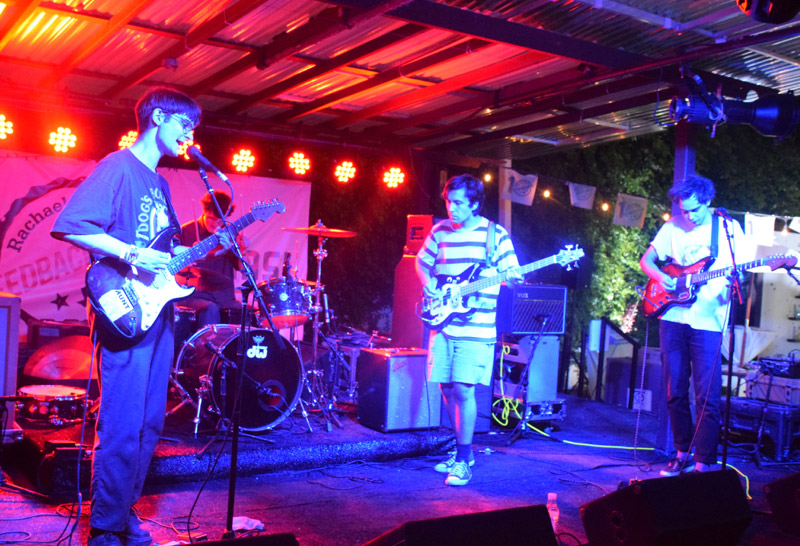 As day turned to night, Feedback House got packed for the slightly meandering alt-rock of New Zealand’s Kane Strang. 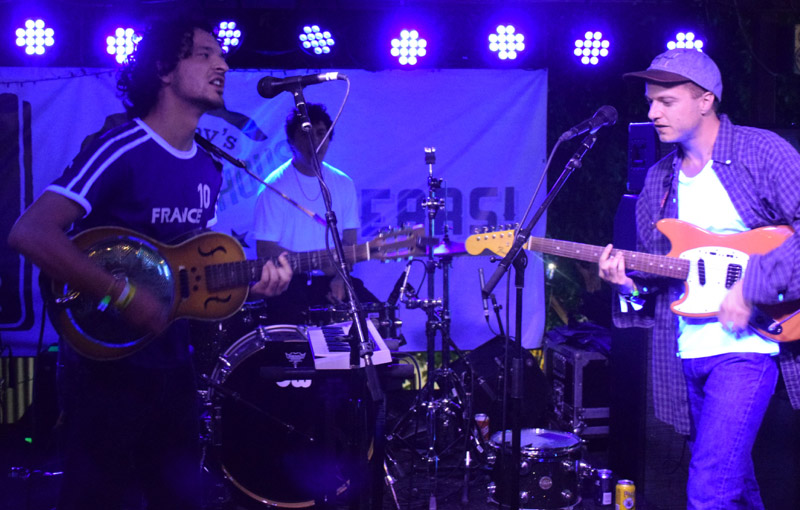 There was more meandering indie-hippie rock from Cotillon. Reminiscent of Mac DeMarco and such, they did have some jangly fun nearer the end. 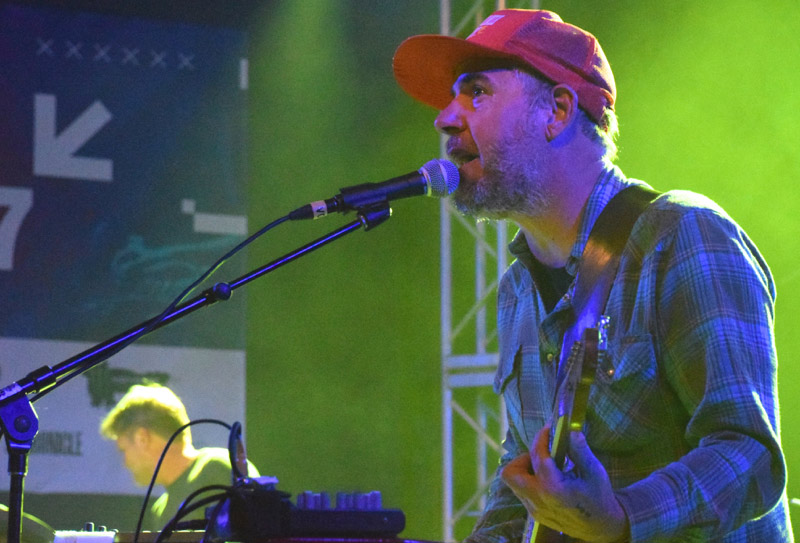 After the hippie indie-jam locals White Denim, Stubb’s played host to the return of Silver Lake’s Grandaddy. The large place wasn’t packed, but the super-fans were definitely there for Jason Lytle and his band. Admittedly a better band on record than live, as Lytle’s restrained persona gives an intimate feel when listening alone in the dark at home, but seems distant up on stage. 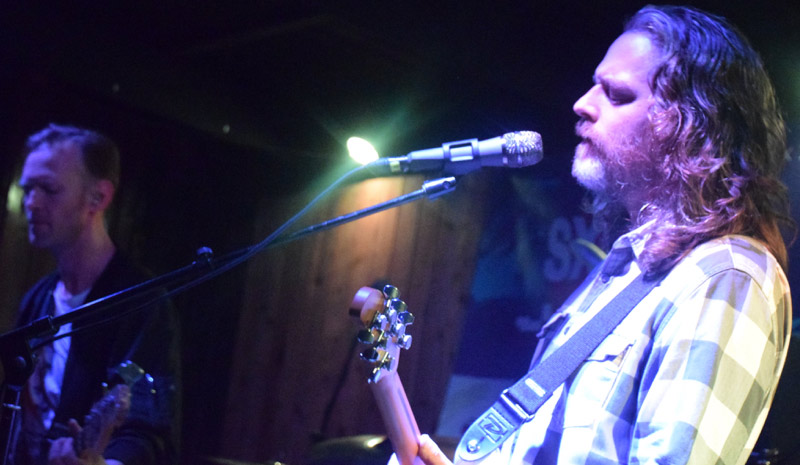 After the strangeness of entering via a back alley (complete with official SXSW checkers), Minus the Bear delivered a full set. Naturally focused on their new record, Voids (QRO review), thankfully it’s a great record. What’s more, it was really nice to see the whole band behind the music, not just the frontman, as can especially happen with more electronic-influenced rock these days.

Uncompromising in terms of doing what they planned to do, they were able to return to the stage even after house music was on (possibly the first time they’d ever done that), thanks to multiple crowd calls for one more song. Admittedly it wasn’t 2:00 AM/bar closing yet, and Barracuda Backyard was a very relaxed setting (including the whiff of pot smoke, and from a joint, not new-school vaping…).

-When the bar at The Blackheart was absolutely packed, still heard a guy ask, “What sort of bourbon would you recommend?”, before finally deciding on something, getting a complicated cocktail for his girlfriend, paying with a credit card, and basically taking as long as possible…

-After declining to stand on long lines for the likes of Neko Case & Weezer (see below), ended up standing on a long line for a Noisey party at The Contemporary Austin – Jones Center. The front of The Contemporary is all glass, so you could see the slow drip of people entering & leaving as the line slowly, slowly moved up (as well as the people claiming VIP skip-the-line status, not always successfully). The upstairs open air space was nice.

-Neko Case, M. Ward, and Annie Hart @ Clive Bar, 9:00 PM. The Clive Bar was the ‘Showtime House’ promoting the Twin Peaks revival, including some of the cast, such as Agent Dale Cooper (and mayor of Portlandia) Kyle MacLachlan, so there were huge lines to enter. Also, Showtime wanted prior approval on all photos of Neko Case for some reason…

-Weezer @ Brazos Hall, 12:00 AM. Of course the Crush Music showcase on Friday night, with one of SXSW ‘17’s biggest acts, Weezer, would hit capacity early. It was to the point where people in the cordoned off badge line were just sitting to pass the time.