From an acoustic brunch thanks to BMI to electric VIP balcony thanks to M&Ms, it was a full Friday at SXSW '18.... 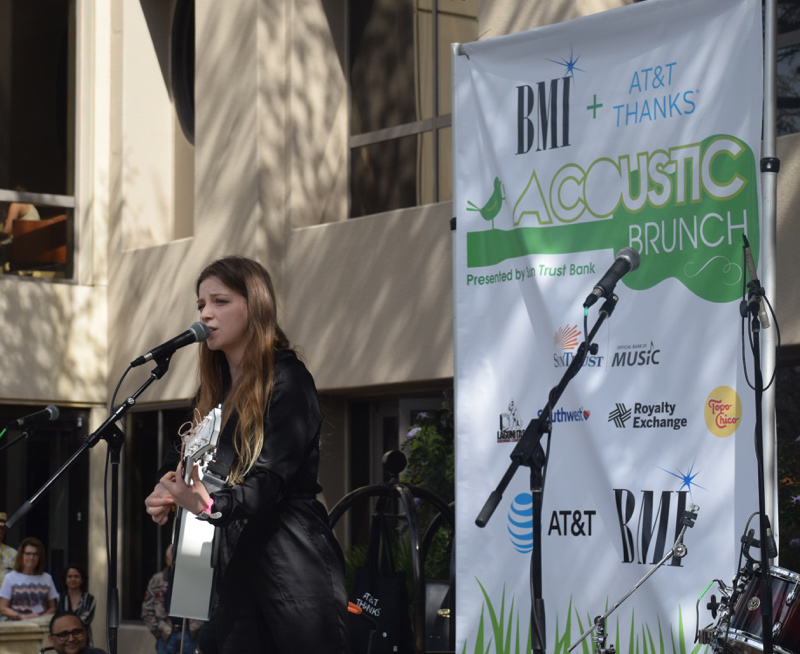 On the classy side of SXSW is the BMI/AT&T Acoustic Brunch, outside at the Four Seasons Hotel. There was a full brunch buffet, and if only one drink ticket, probably best to limit drinks, this early.

Artists were still plugged in, but relatively lower key, like Jade Bird, songstress with Aussie charm. 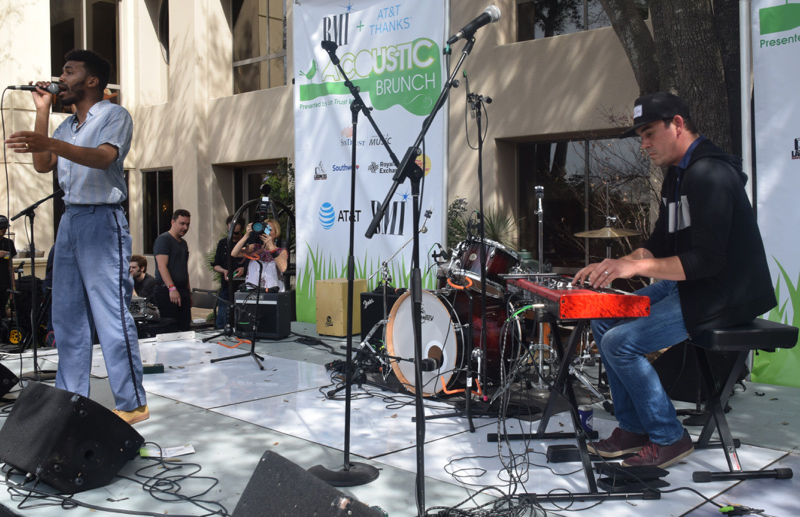 Going towards the R&B/soul acoustic was Davie. 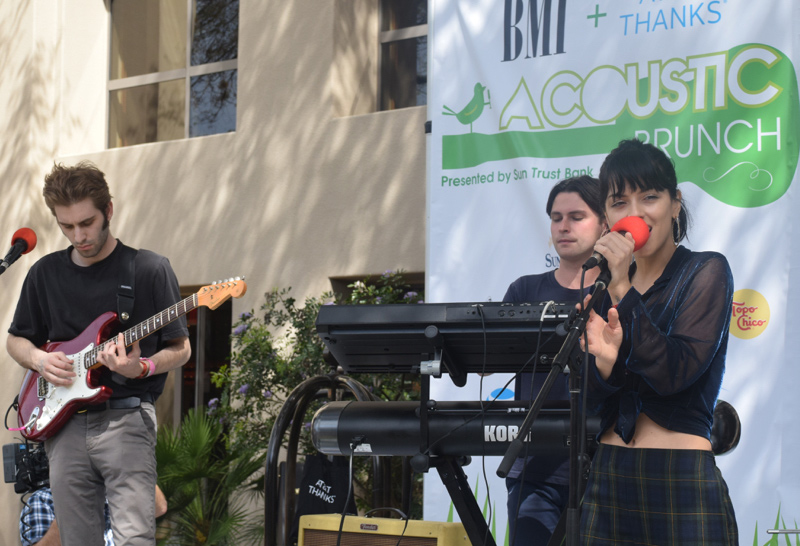 The entire brunch was relatively easy listening, but more sexy with The Marías. 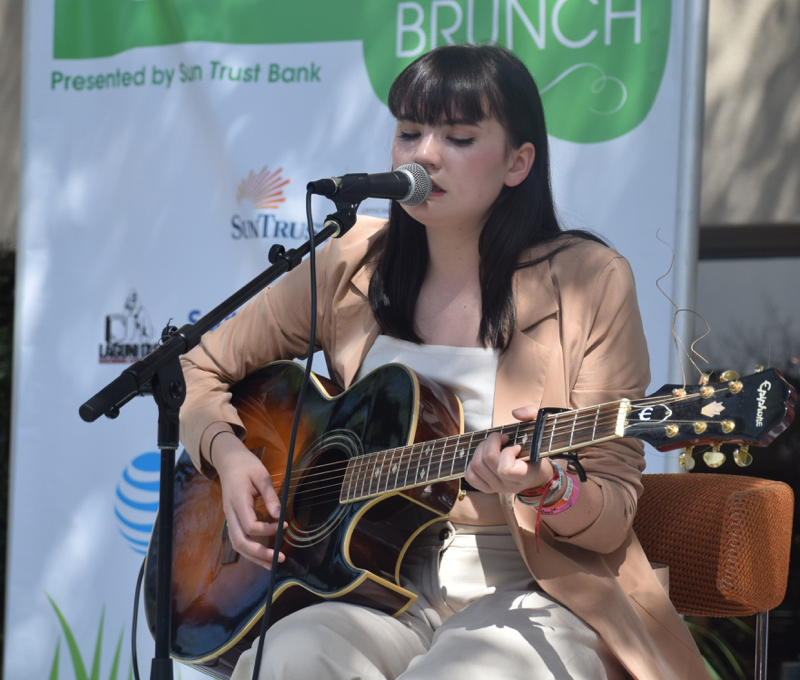 Closing it out with solo acoustic soul power was Sampson [note: your correspondent managed to tag two other musical Sampsons when posting a pic on social media, one through Twitter, one through Instagram].

All Are Welcome party @ Mohawk 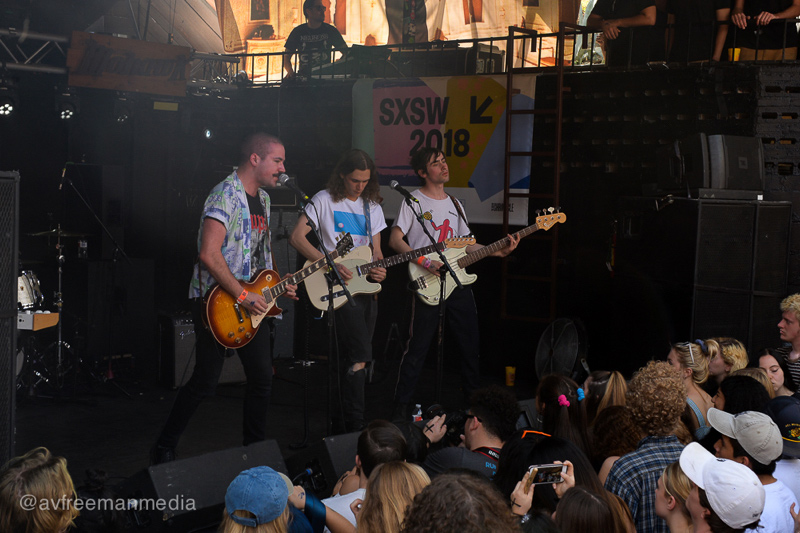 QRO’s Alex Freeman headed to the Mohawk for the wilder rock of WAVVES and White Reaper. 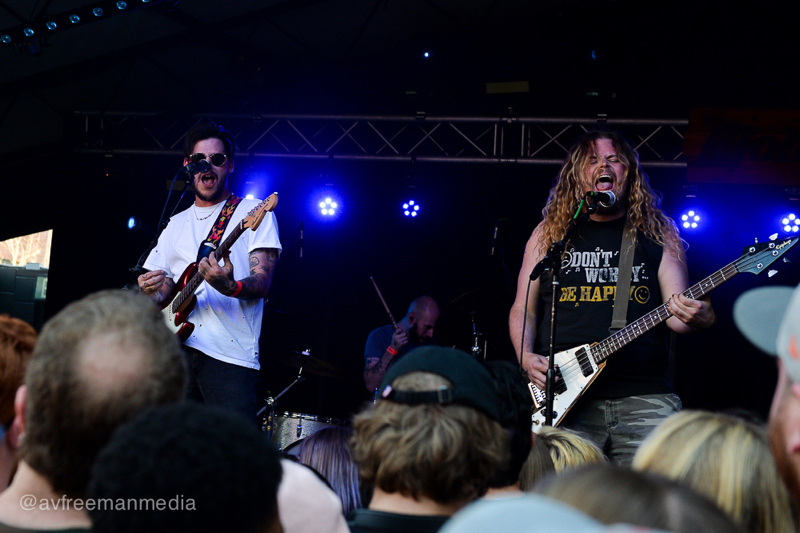 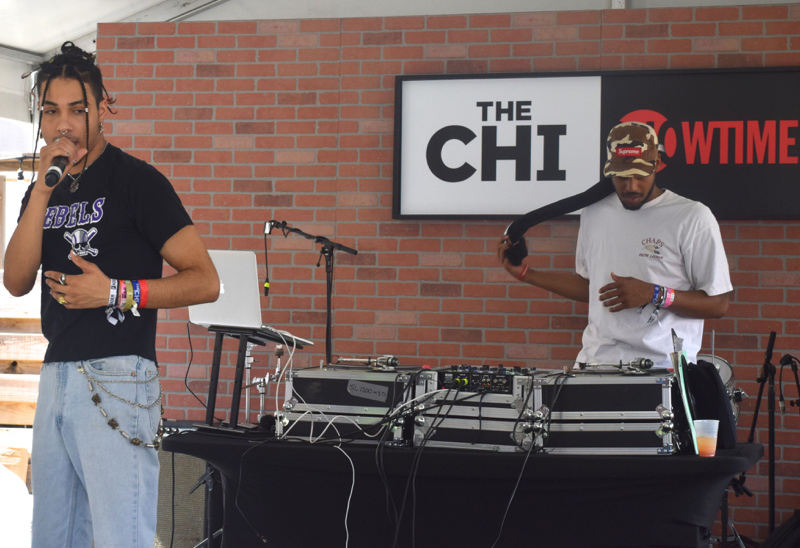 Culture Collide having multiple events at multiple places with multiple sponsors in the Rainey Street area made it an ideal place to bounce around during the day. Started with The Showtime House at Clive Bar, which this day was promoting the Chicago-set The Chi, so it was Chicago acts like Melo Makes Music, whose Chi-town R&B/hip-hop was almost the stereotype of what you would expect to open The Chi party. 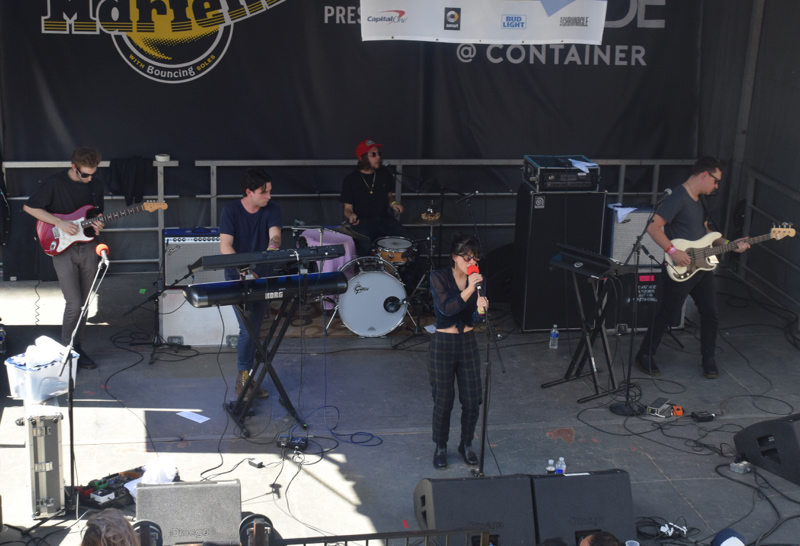 It’s not SXSW if you don’t see an act twice by accident, though rarely quite so close together as seeing The Marías for a second time in a handful of hours. Though fully electric at Container Bar, not that much different from their set at the Acoustic Brunch. 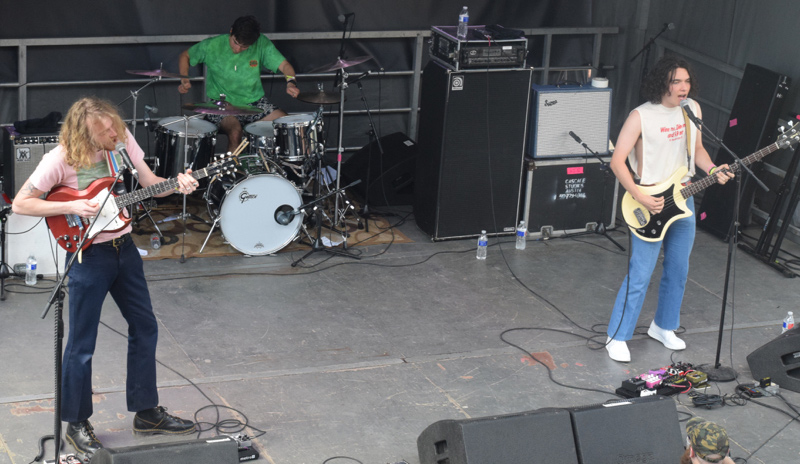 One sound that had been lacking this SXSW was garage-punk party, but that thankfully came in the form of Naked Giants. 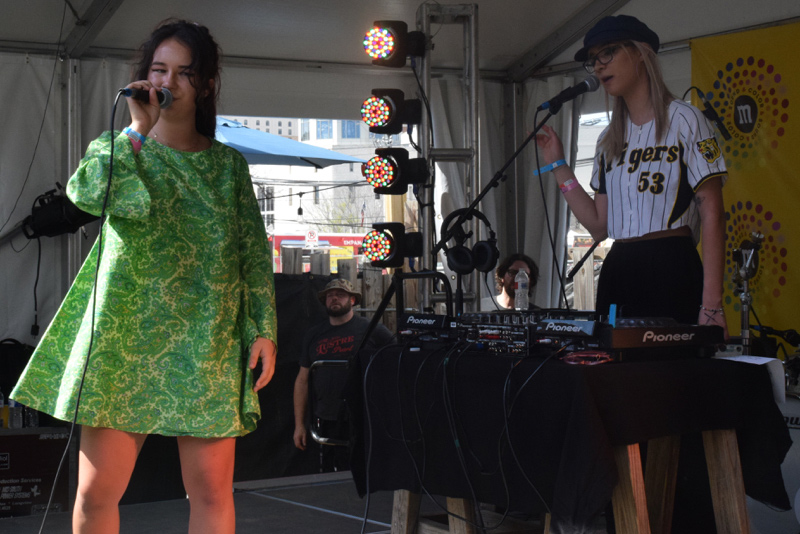 It’s always funny to see an artist at SXSW too young to drink at the bar she’s playing, like seventeen-year-old Brisbane MC Mallrat doing synth-pop. 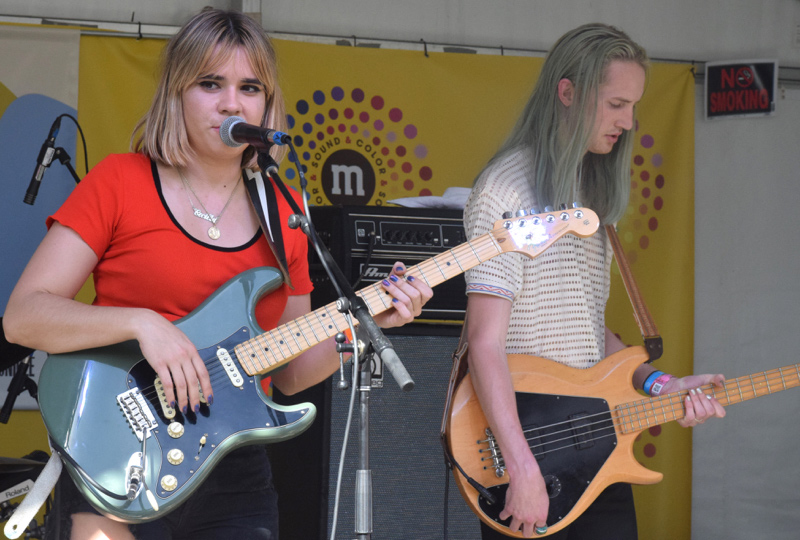 Under the sun of the first really hot day of SXSW, Gothic Tropic were thankfully tropical, not goth, relaxed, though got more garage as they went on. It was so hot that it started with frontwoman Cecilia Della Peruti saying that she felt “faint-y,” requested some fruit (at the M&M-sponsored event). 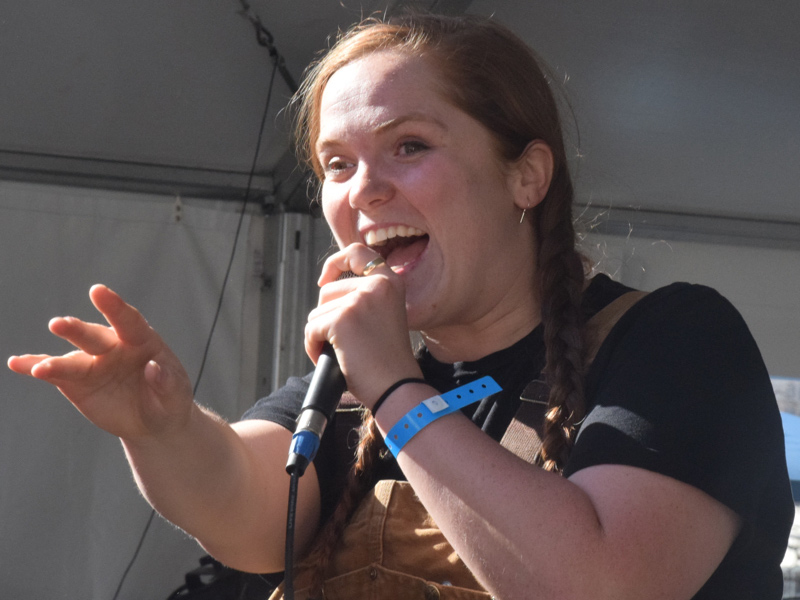 People had been sitting on the fake grass at Lustre Pearl while watching the music – until Flint Eastwood came on, and asked folks to not only stand, but also move closer. Really lively, something that’s hard to pull off this deep into SXSW. 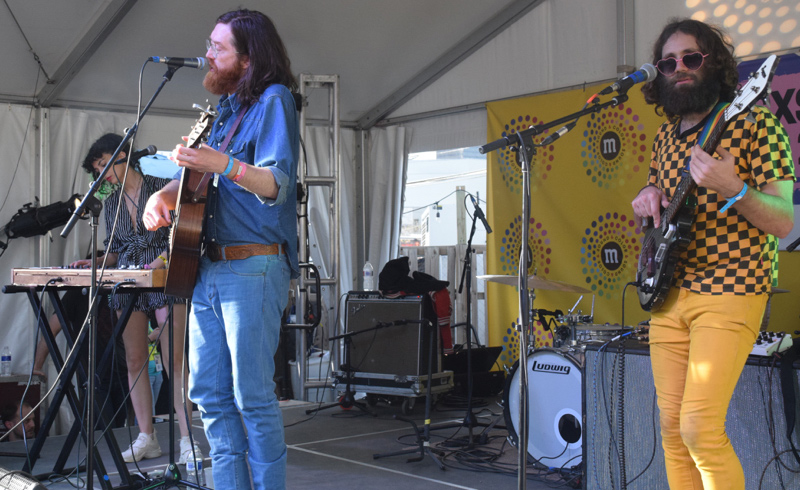 One of the must-see acts of SXSW ’18, Okkervil River were definitely worth a second spin, now catching in full. They’re also an act that’s great in the daytime, playing both new material behind the upcoming In the Rainbow Rain, but also great older songs. “Don’t Move Back To L.A.” is just such an Okkervil River line. 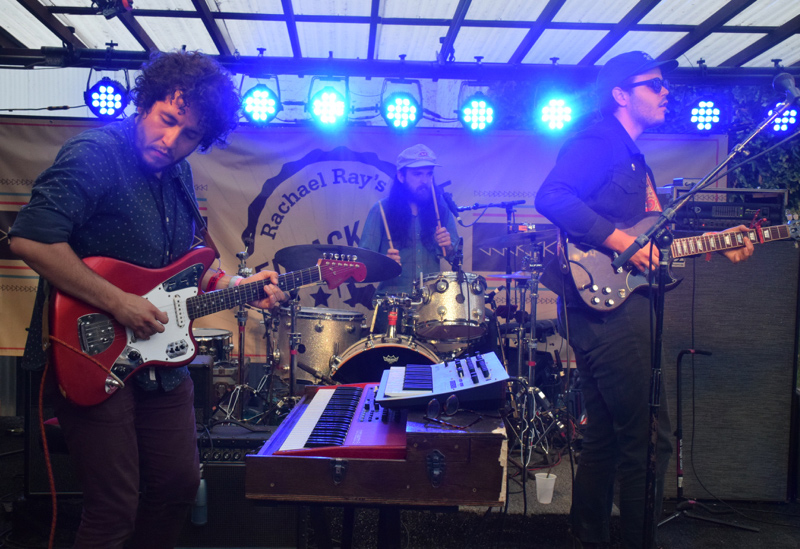 Sunny like their name, but Sun Seeker also brought the psych – it is the Rachael Ray “Feedback” House, after all… 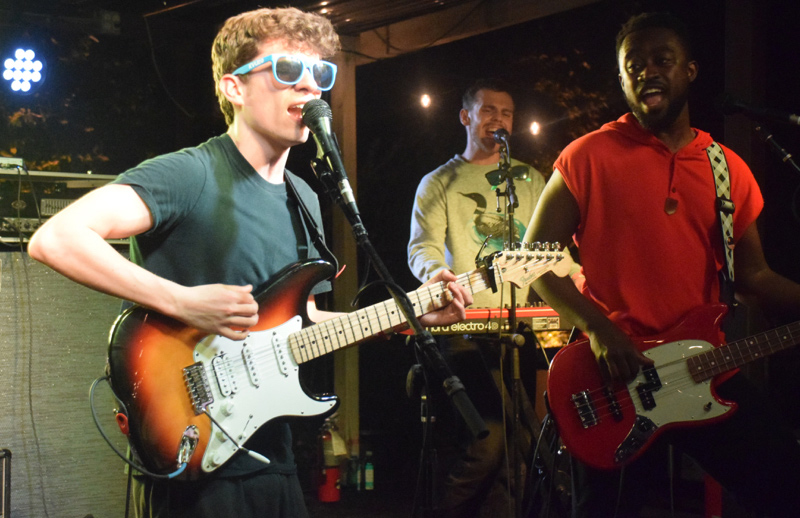 The cheery rock of Arlie was nice, but nothing special. 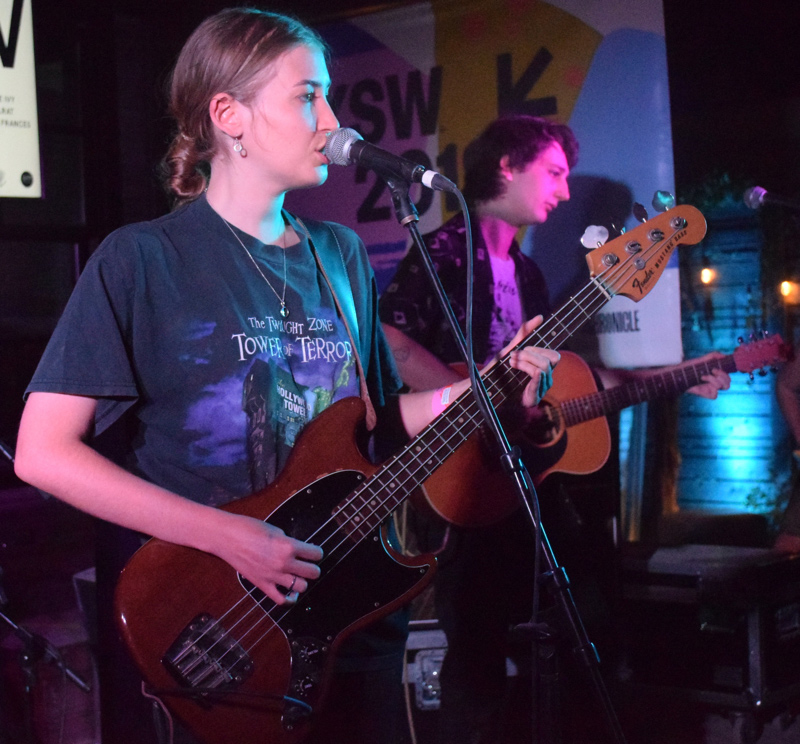 QRO O.G. Chris Fore recommended Hatchie to your correspondent, and her enjoyable female electro-rock pop had real energy and push behind the music, even at a random SXSW showcase. 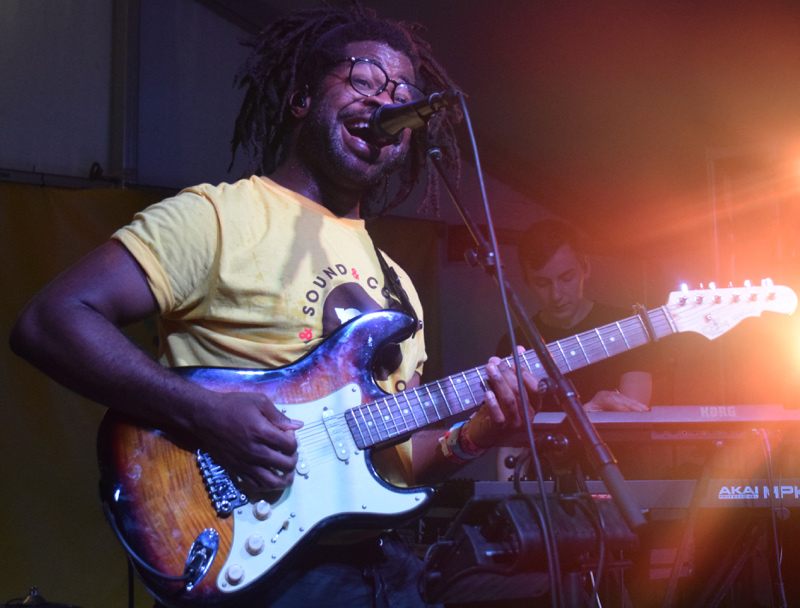 Taking over from Twix at Lustre Pearl was fellow Mars company candy M&M, whose evening showcase had high interest. R.LUM.R delivered R&B soul with some rock. 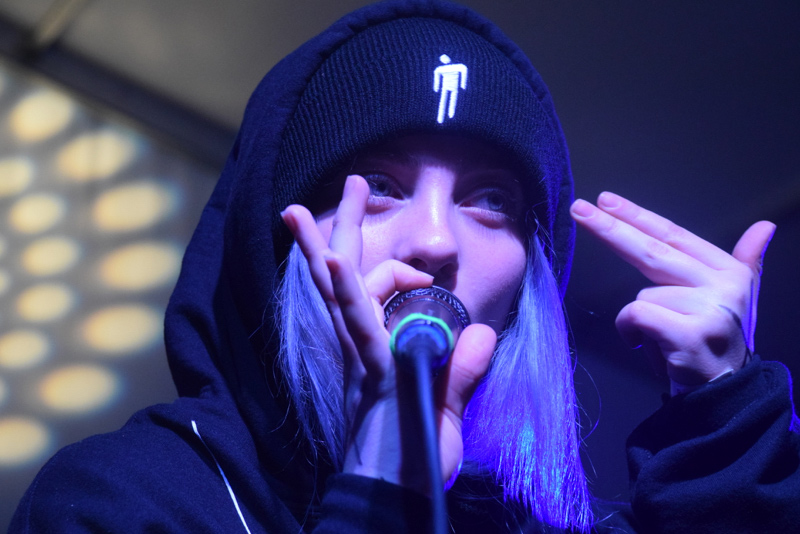 Totally different from her Tuesday performance (if that was her), Billie Eilish at Lustre Pearl had serious rhymes & serious presence – and the women in the crowd were seriously into it. A definite standout of SXSW ’18. 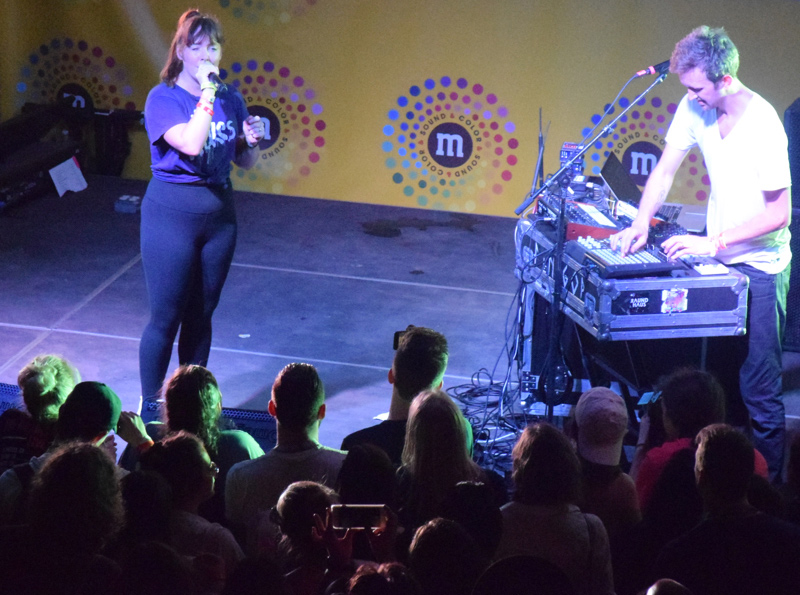 The whole audience loved Sylvan Esso, who “never stop starting,” and one could tell that the duo was feeding off the crowd’s energy.

-Often at SXSW, free food can be tough to find, but not this day, between the BMI Acoustic Brunch at Four Seasons Hotel, high-brow offerings at Showtime House, and fancy hot dogs from Kings Hawaiian at Rachael Ray (and free M&Ms).

-After leaving the balcony VIP at Lustre Pearl to shoot Billie Eilish, could not reenter due to the balcony being at capacity – so your correspondent was penalized for doing his job (and thus the photos of Sylvan Esso are from the balcony). Balconies often have low fire capacity, but the whole situation still caught the folks in charge there by surprise; obviously word had gotten out that it had an open bar. The security woman at the stairs was overworked but did her job admirably, in the face of some less-than-civil self-important VIPs (who weren’t exactly sober) and lack of control over when she could let people back up. Your correspondent’s plus-one never left the balcony, first mocking him, but then walked down the stairs to hand him a beer while he was waiting on line – big thanks to him (and the security woman for letting it happen). It’s really not SXSW unless you’re stuck in a surprise line at least once because some place is at capacity…

-Andrew W.K. @ Container Bar (Dr. Martens/Culture Collide party), 6:00 PM – 7:00 PM. Could have left Lustre Pearl to catch the party maven playing behind his new album You’re Not Alone, but your correspondent stayed where he could get free drinks. W.K. would understand.