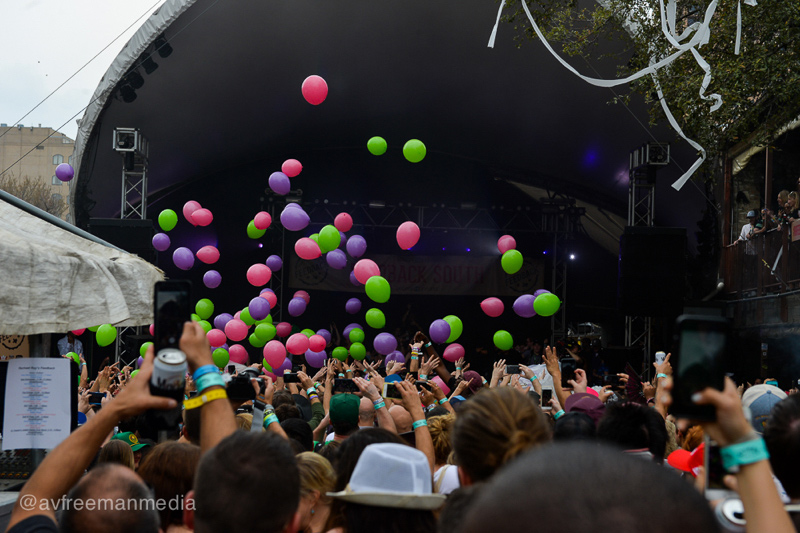 The biggest party on Saturday is Rachael Ray’s at Stubb’s, though this year it ended relatively early, leading to having the big-name likes of Girl Talk playing way early at 1:00 PM. While he ended as he always does with fans on stage & confetti, it was rather early for his volume – literally staff at the soundboard with their fingers in the ears. 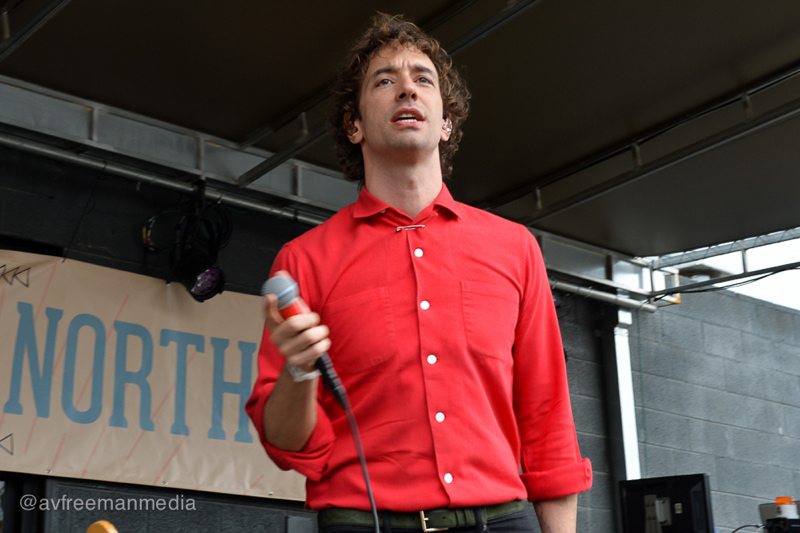 While he’ll always be best known as the guitarist for The Strokes, Albert Hammond Jr. has been carving his own solo identity, with new album Francis Trouble out right before SXSW. Admittedly, he sounds a lot like The Strokes without lead singer Julian Casablancas – without that voice, but also without that ego. In the Oasis comparison, Hammond is the guitarist/songwriter/more successful brother Noel Gallagher to Casablancas’ own underwhelming solo Liam. 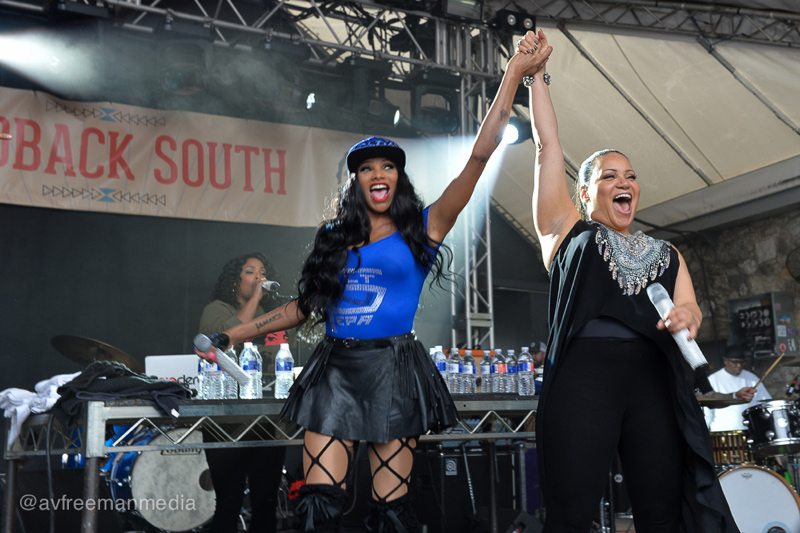 It wouldn’t be Rachael Ray’s big party without a big throwback, coming this year in the form of the one-and-only Salt-N-Pepa. Complete with big-name-DJ-in-her-own-right Spinderella, plus dancers, it was a giant party. “Where my nineties ladies?” “Where my seventies babies?” “We apologize for getting you ladies in trouble as kids, talking about sex…” “We about to get hardcore? Well, let me take my earrings off…” Yes, they did their nineties hits like “Let’s Talk About Sex”, “Shoop”, and more, even DJed some era appropriate Guns n’ Roses & Nirvana.

The alternate stage was for today’s guitarists, like Hammond and Kurt Vile. Vile was playing solo, perhaps because it made for an easy set-up and allowed for starting just as the prior act ended. The twang-wise young man can be reminiscent of early Beck, though seemed a little wry about the whole thing that day. 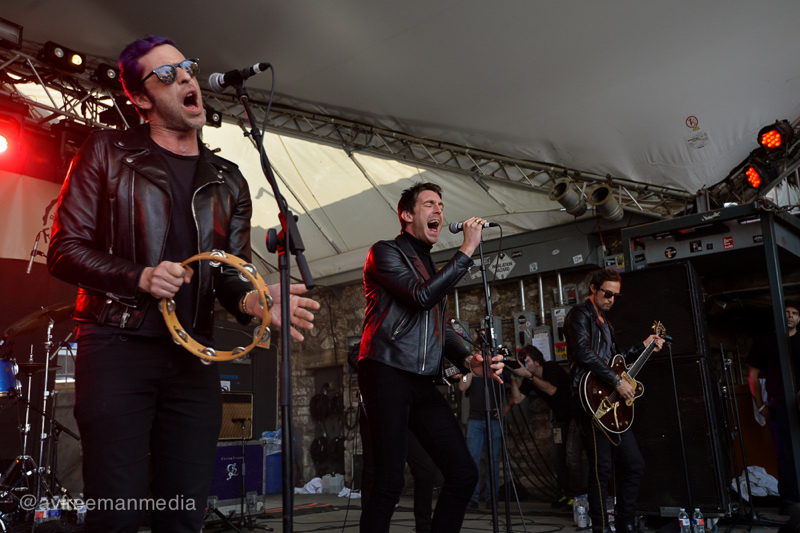 The unusual headliner was Dr. Pepper’s Jaded Hearts Club Band, the Beatles cover outfit started by Muse’s Matt Bellamy, and featuring the likes of The Last Shadow Puppets’ Miles Kane and Jet’s Chris Cester on vocals. Kane even got sung “Happy Birthday” – though why not Beatles’ “Birthday”?

While Bellamy was the big name behind it (aside from Beatles & Pepper), it was a bit more like seeing Jet & Kane cover The Fab Four than Muse. Indeed, where was a Gallagher? The group hewed to the rocking Beatles songs like “Back In the U.S.S.R.”, “Drive My Car”, “Taxman”, “She Loves You”, and closed with “Helter Skelter”. 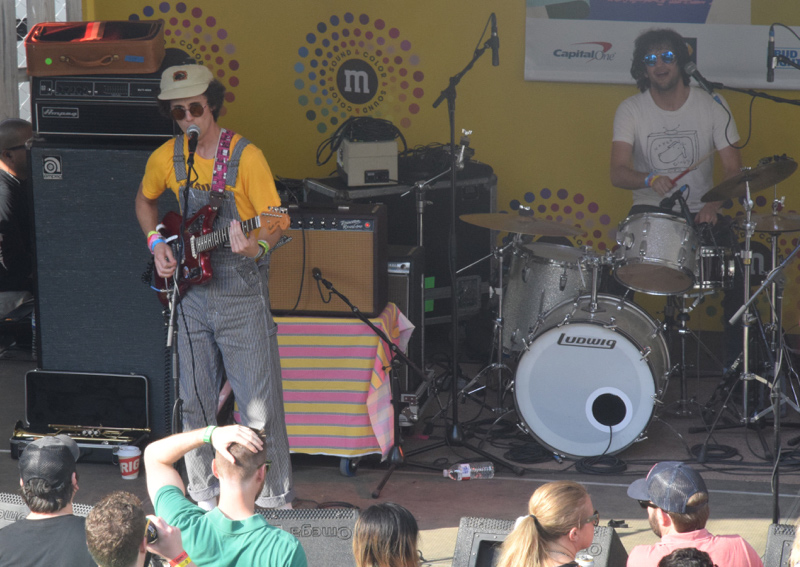 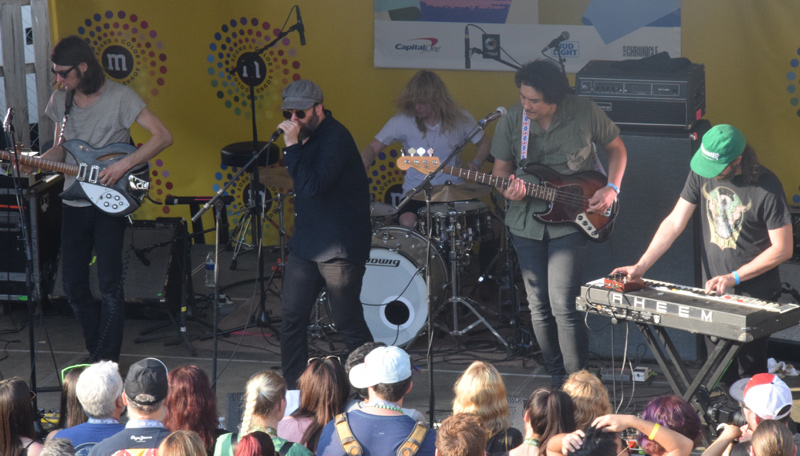 There are local Austin acts who play SXSW even when they don’t have a new album, but only a few or even one appearance, like The Black Angels headlining the party (“Only SXSW appearance” was a hallmark of Culture Collide’s Lustre Pearl shows – sweet candy money…).

There are a lot of bad-to-mediocre twenty-first century psych-rock bands. The Black Angels aren’t one of them. Indeed, they might be this generation’s Brian Jonestown Massacre, with tambourine-wielding Alex Maas Austin’s answer to Portland’s Anton Newcombe. 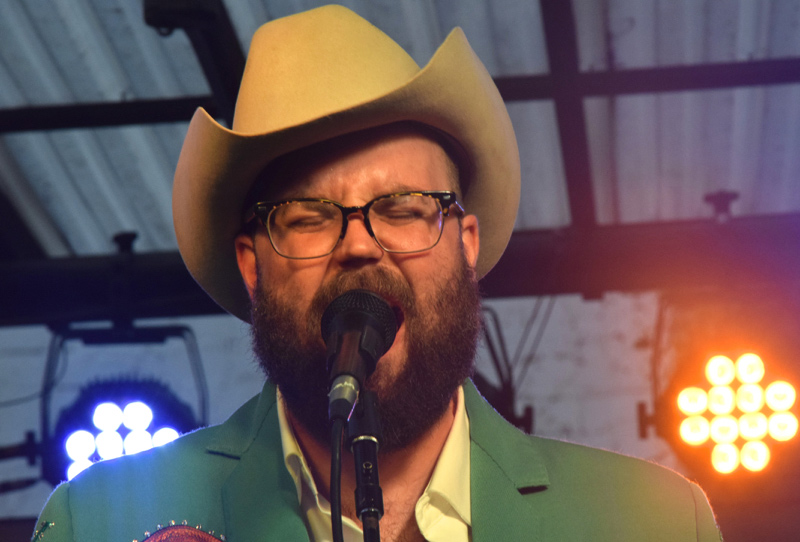 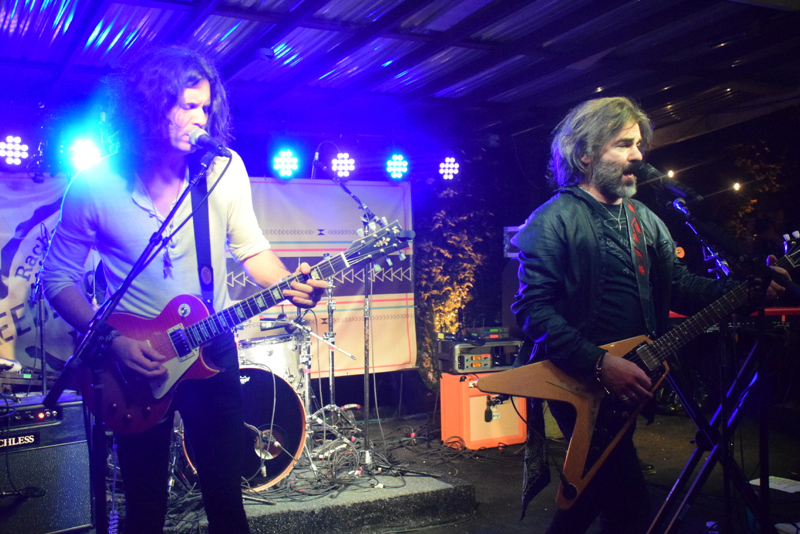 Ray has such a big SXSW presence in large part because of her husband John Cusimano, who has his own rock dreams with his outfit The Cringe. And if that’s what it takes, so be it. The group is nothing standout, playing classic rock, including a cover of David Bowie’s “Under Pressure” (that couldn’t be as good as the rendition done the week before on SyFy’s The Magicians – video). 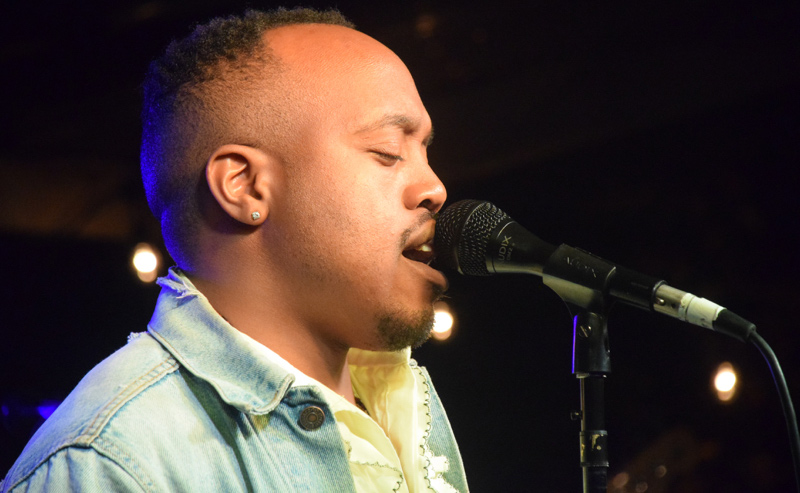 Your correspondent closed out his SXSW ’18 with the neo-soul of Durand Jones & The Indications, who reminded of Lee Fields or the late Charles Bradley (but younger). 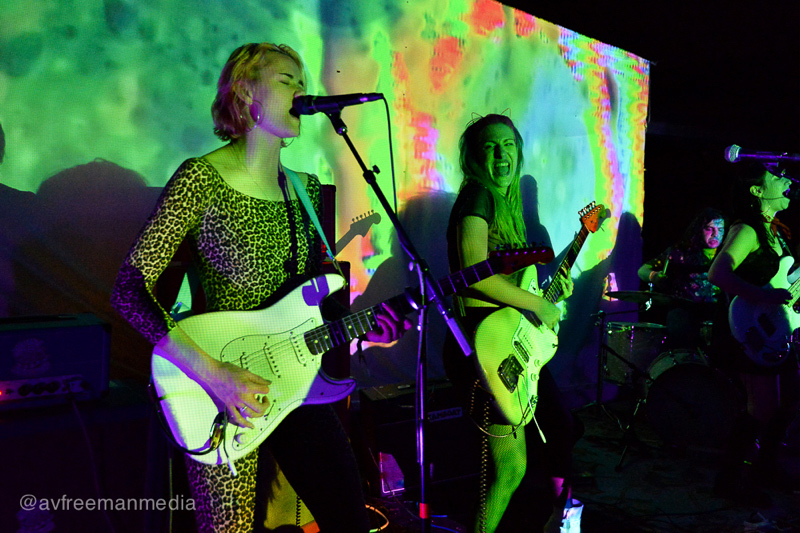 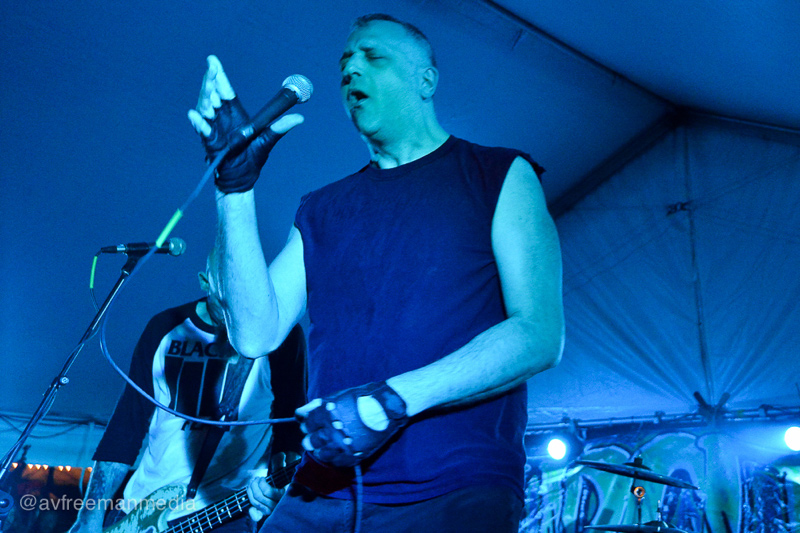 And he headed to Hotel Vegas for ORB at the Volstead Lounge and The Dwarves in the patio. 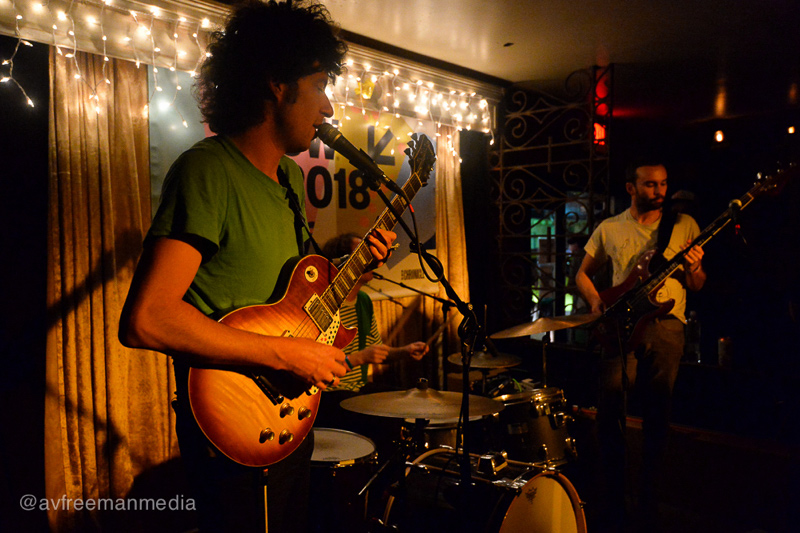 –The Roots Jam, with the likes of Ludacris, the big event on the final night of SXSW, was cancelled due to a bomb threat. While throughout the festival those outside of Austin were filled with worry for those of us in the city, of the bombs there that had detonated the week prior and filled the national news, it was not big news in the city, at least the parts SXSW dominated (indeed, your correspondent’s taxi driver from the airport hadn’t even heard of the explosions). More occurred after, including the day after SXSW ended, before the bomber was cornered and died in his own detonation. The bomb threat to The Roots Jam appears to have been unconnected (though possibly inspired/copycat), and there was no actual bomb, with the man who made the threat arrested quite soon after.

-After the VIP balcony at M&M Lustre Pearl had maxed out the prior night (leading your correspondent to take photos from the balcony from then on there), this night there was a super-duper VIP list of only 50 (out of 300 VIPs) who were cleared for the balcony on the final night. So of course your only regular VIP correspondent didn’t go…

–Kings Hawaiian somehow ran out of chips on the final night at Rachael Ray Feedback House – except for the ones on display at the truck, which they wouldn’t let people take.