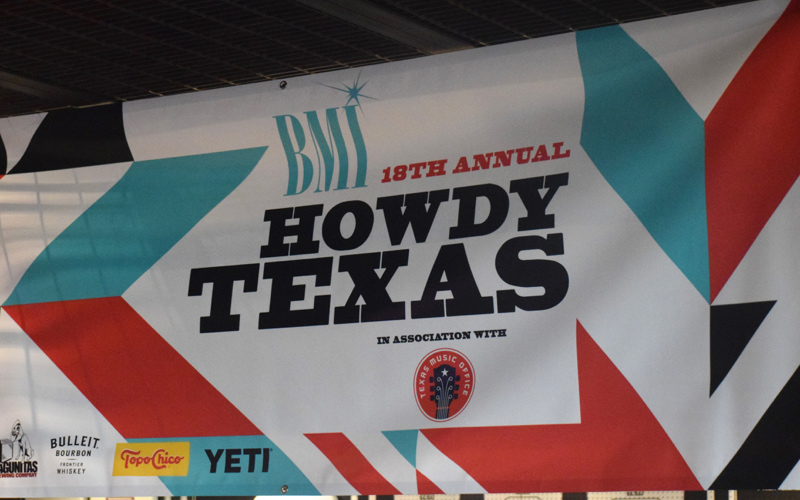 BMI is one of the most essential organizations in the music industry, handling rights management – a.k.a., where most of the money comes from in these days of no record sales. So of course they come in full force to SXSW, starting with their annual ‘Howdy Texas Party’, at the YETI Flagship Store. And yes, it had free drinks (Lagunitas IPA and Bulleit Whiskey) and free food. 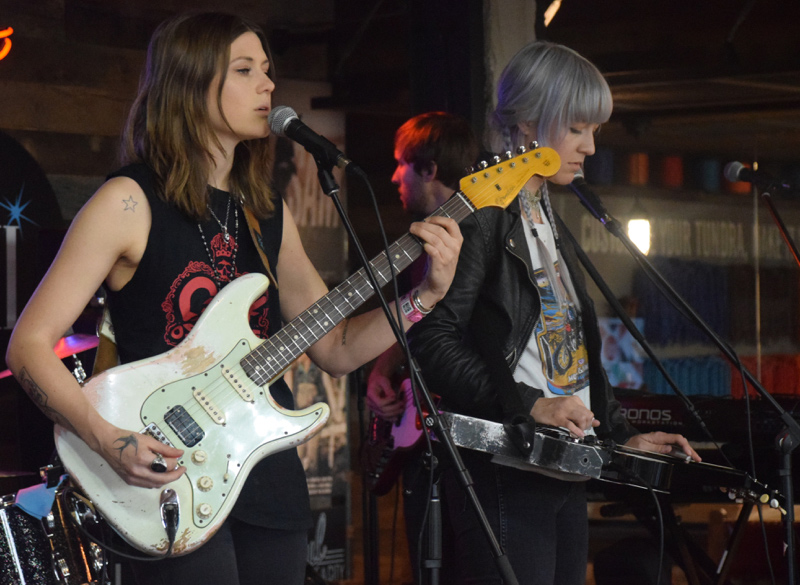 These blues-rock sisters Larkin Poe (named after an ancestor who was related to Edgar Allen) have been getting buzz in more mainstream circles, and it was easy to see why. Very country barstool, causin’ trouble, while very appealing. And you have to appreciate an act with a strapped slide guitar – not to mention praising the brisket on offer, despite being vegan. 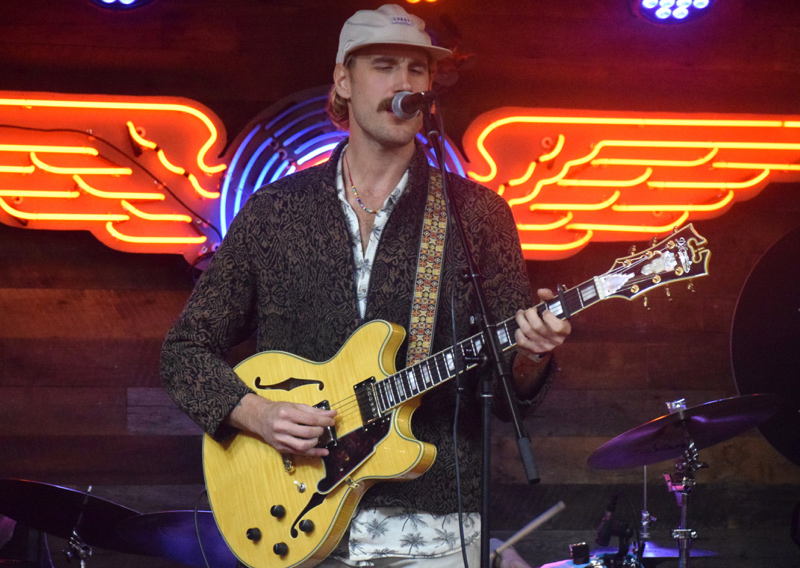 While he’d been standing around amongst the other attendees earlier on, Rayland Baxter didn’t look like a country musician. Indeed, his bearded keyboardist and hippie pedal guitar player more looked the part (the latter looking like Casey Affleck if he’d been the subject, rather than director, of I’m Still Here). Baxter fits into the more adult contemporary country-jam – the kind of artist you could see opening for Dave Matthews. But he was also really easy to listen to in that way, and fit the adult crowd. 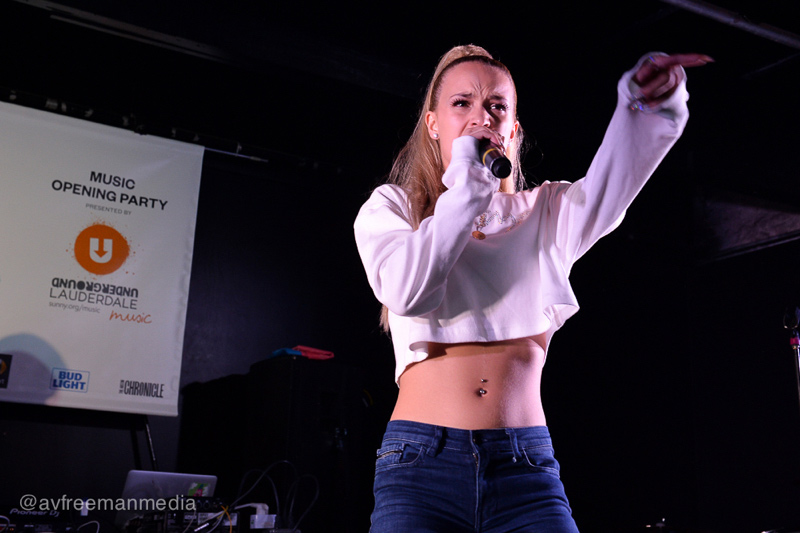 She might have had fake extensions and an auto-tuned voice, but Barcelona’s Bad Gyal did have authentic Catalan hip gyrations. 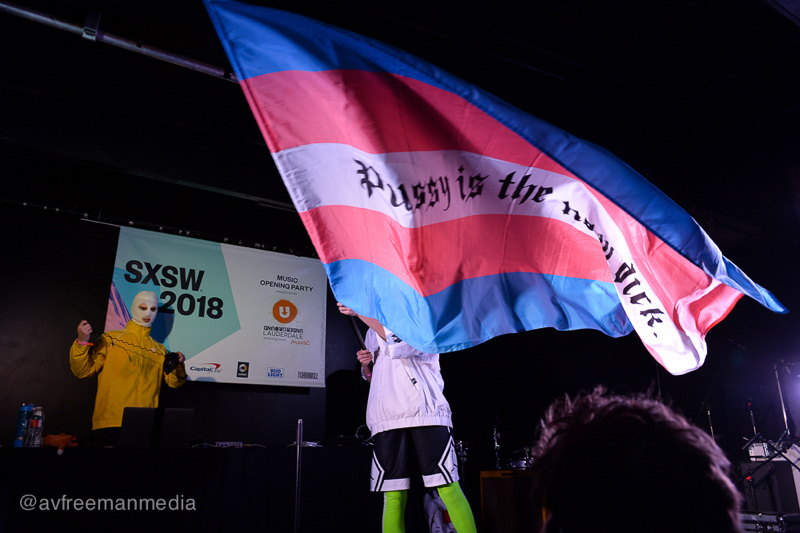 One of the most high profile names at SXSW ’18 was Russia’s Pussy Riot, the female protest-punk collective who were jailed in Siberia for a thirty second performance, and indeed were playing days before the Russian Election [spoiler alert: Putin ‘won’]. They kept up their agit-activity stateside, as when they couldn’t remove the SXSW backdrop with sponsor logos, they covered up the logos with impossible-to-remove tape. Oh, and they were introduced by Chelsea Manning.  “Pussy Is the New Dick” indeed. 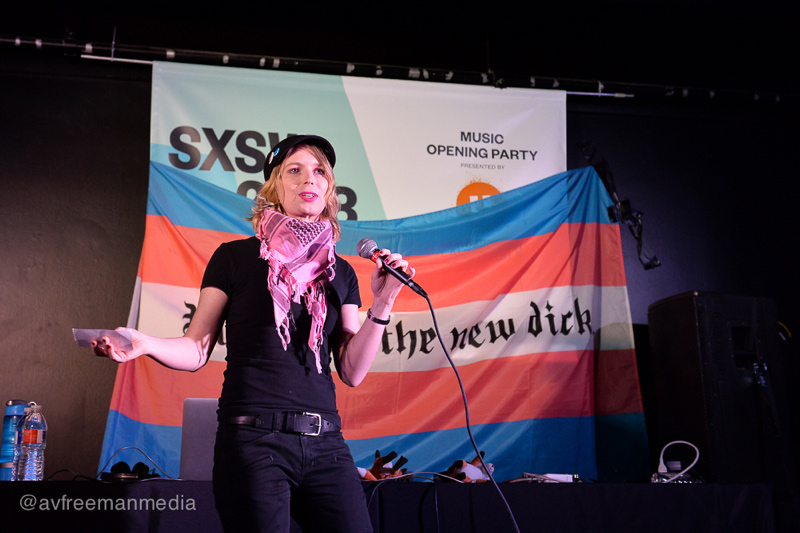 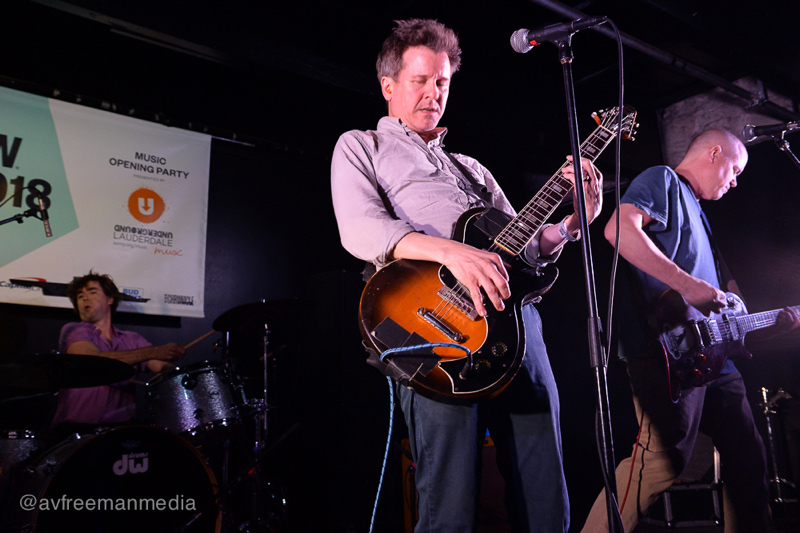 Unfortunately the SXSW Music Opening Party was the last South-by performance by Superchunk, the Merge Records founders playing early behind their great new What a Time To Be Alive (QRO review)

“I want to see booty sweat as far as the eye can see.” Thus did Duckwrth introduce himself. One of the just-rising artists to see at SXSW, he definitely impressed. Really engaging and active, he had a fun charisma and could hook just about any listener.

It was a totally packed stage floor for Billie Eilish (whose name said aloud does sound a lot like “Billy Idol”). She had soulful, intimate, awkward charm, a really different, though still compelling, delivery than later on at SXSW – so much so that your correspondent still isn’t a 100% sure that it was Billie Eilish.

[note: not helping matters is that your correspondent lost his photos from this point on, because he can’t manage his disk space & camera…]

Yes, there were bigger events on Red River, but one doesn’t go to SXSW to see the big acts, or at least one shouldn’t. So instead hit up a reliable indie PR company, Riot Act Media, at the more dive Valhalla. And while your correspondent lost his photos of the evening, it was a good one, including running into Canada’s crazy Nardwuar.

Fun female punk is definitely something one hopes to catch at any SXSW, and Partner delivered it. The Canadian act even had a song about being compared to countrywoman Ellen Page (though she’s Halifax, Nova Scotia, and they’re Edmonton, Alberta) – that Page herself liked online.

Closing out the evening was Barrie, a more relaxed indie-jam, for people who had had enough drinks by this point (or even earlier…).

-Your correspondent road the bus much this SXSW, and while it was no NYC subway, Cap Metro does have a very user-friendly app (because of course Austin’s public transportation has a great app). The bus itself worked as promised, and while didn’t go completely into the AM, was catchable at midnight. Your correspondent’s first ride did include a guy getting out of drug court with luggage & talking to himself, plus a father trying to get his son to cover for him with the boy’s mother (“Thank god for alcohol!”) – and later, when closer to downtown and significantly up-market, a yuppie family with little kids taking their first ride on the bus.

-For the second year in a row, your correspondent forgot to change the clock on his computer when changing time zones, and arrived to his first event of SXSW an hour early. If he’d just ignored Daylight Savings for a few days, would have been fine (though probably missed his flight…).

-Discussed the music industry with someone from Facebook, which is exactly why one goes to a BMI party at SXSW.

-SXSW Tuesday is the opening for Music, but also the closing for Interactive, which is where the money is, so of course there was a big closing party at Stubb’s with Steve Aoki.

-Dermot Kennedy @ Pelon’s Tex Mex (Vevo Party – see above), 8:00 PM – 9:00 PM. Arrived at Pelon’s just in time to miss him (and the free Mexican food), and heard from others, who hadn’t known who he was going in, that he impressed – basically the exact thing you want to do in an SXSW performance.

-Nathaniel Rateliff & The Night Sweats and Lukas Nelson & Promise of the Real @ The Gatsby (Pandora Showcase), 11:30 PM – 1:30 AM. Despite being a badge only event, The Gatsby was still well past capacity, not letting in even VIPs or SXSW requisite platinum badge buyer who bitches to the doorman about how much money he spent on his platinum badge. Your correspondent remembers seeing Rateliff at SXSW ’09 (QRO photos) filling in for The Pains of Being Pure at Heart during the day – and everyone leaving.

-Annie Hart @ Javelina (Force Field PR/Danger Village Showcase), 1:00 AM – 2:00 AM. Too late after having flown in the AM and drunk in the PM for Annie Hart (QRO interview) of QRO favorite Au Revoir Simone (QRO spotlight on), playing behind last fall’s Impossible Accomplice (QRO review).