At every SXSW, there are events that stand out beforehand, such as an evening at 3TEN ACL Live at The Moody Theater (part of that historic venue) featuring photos by Jim Marshall from the legendary Folsom and San Quentin Prison performances by Johnny Cash – all sponsored by Jack Daniel’s: ‘An Evening with Jack, Jim & Johnny’.

At every SXSW, there are events that disappoint, and unfortunately this was one. The photos were amazing, but folks were only allowed to look at them for the first hour, rushed upstairs, then rushed downstairs, missing the impressive food spread. Jack Daniel’s only gave drink tickets, which ran out. Oh, and absolutely no photography was allowed – indeed, it was only thanks to persuasive local QRO photographer Jessica Alexander that your correspondent (and her) could even enter the venue with their camera bags (which one has to carry with them throughout the day at SXSW).

Gary P. Nunn played Johnny Cash songs, and did them well, but wasn’t really paying attention. The specialty ‘Rye Ball’ Jack Daniel’s cocktail was good, however (but of course that just meant a scrum at the bar, as each had to be made individually). 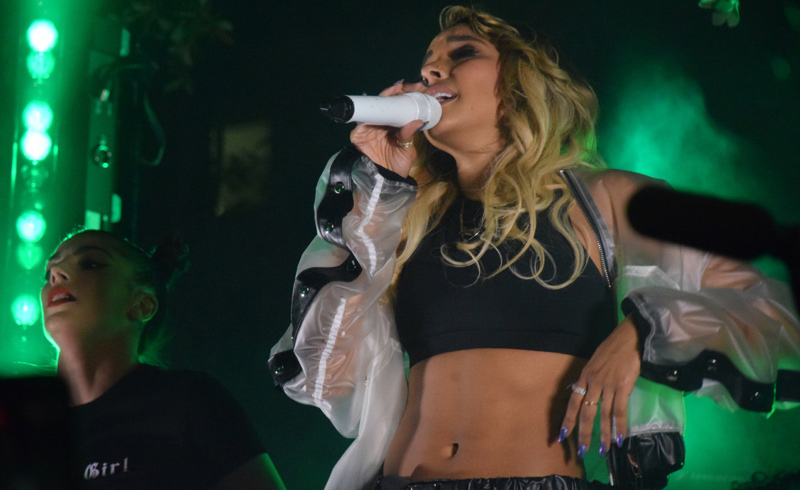 After missing the first act, and the Pelon’s quesadillas, the prior night, your correspondent made sure to make it to Vevo party before 8:00 PM. While on Red River Street, right across from the big Stubb’s, Pelon’s is much more a bar & restaurant than concert venue, with a small stage and small stage floor – there is even a tree going right up in the stage floor.

However, Tinashe did not let the small space inhibit her, with sexy, killer dance moves & crew. 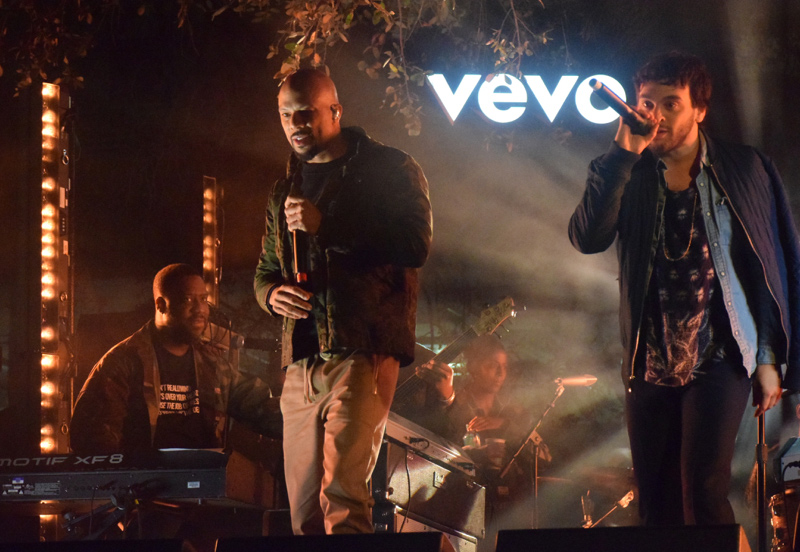 The main draw for the final night of Vevo’s SXSW parties was, though, August Greene, the new supergroup of Common (recent Oscar loser & Saturday Night Live impersonated) with producers Robert Glasper & Karriem Riggins, who had teamed up after winning the Emmy for Original Music to Netflix Ava DuVernay documentary 13th, and had put out their self-titled debut the Friday before.

Admittedly, it was a long set-up, not surprising for such a big new act, and furthered by not being able to leave equipment on stage during Tinashe, for fear of her impressive dance crew. Indeed, Vevo had been wise enough to schedule only two acts that night, not three, giving August Greene time, even if they went on at 9:45 PM, not scheduled 9:00 PM. And of course the stage floor was packed to capacity (your correspondent had a hell of time getting out) – literally spotted Austin Fire Department officials there.

August Greene is very much a Common-plus project, even also playing Common songs (something the rapper acknowledged that they had to do), but the show was focused on August Greene, such as “Black Kennedy”. “People ask me … it’s about black excellence.” Common’s lyrical skills and positivity-through-perseverance (“You’re a TED Talk put to music,” as described by Keenan Thompson as Steve Harvey on SNL) were on full display.

And however packed it was, it was still great to see them so up-close, as opposed to the much larger packed situation (and line to get in) sure to happen for them at their next show, just across the street, just after midnight for their official Stubb’s showcase. 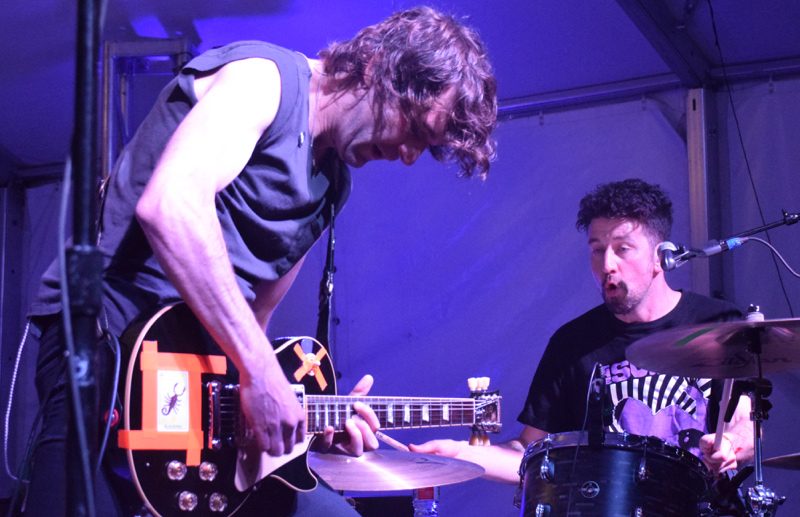 Culture Collide has been taking over Rainey Street area every SXSW since it started (and before that, when it was part of Filter Magazine), roping in a variety of sponsors, but the best had to be the Mars Company events at Lustre Pearl, such as the TWIX House of Duos. Yes, there was free Twix, but more important for your correspondent was easy entry & open bar with VIP wristband.

But most important was Japandroids, playing their only SXSW ’18 show. Not their first South-by, and couldn’t be as wild as their VICELAND SXSW ‘13 show (QRO photos) where the guitar-and-drums duo asked security to leave, but it was a hell of a step up from their first time at the festival, way back in 2002, as they joked. Sometimes acts aren’t happy about playing corporate sponsored gigs at smaller-than-usual spaces for this festival, but singer/guitarist Brian King & drummer David Prowse were in good spirits, joking also about how “North East South West” isn’t about South-by-Southwest, but all over (something Prowse pointed out that Kind seemingly had never realized).

Also of note: Japandroids’ roadie had put down tape in front of King with the words, “Brian don’t fall over – I mean it!” 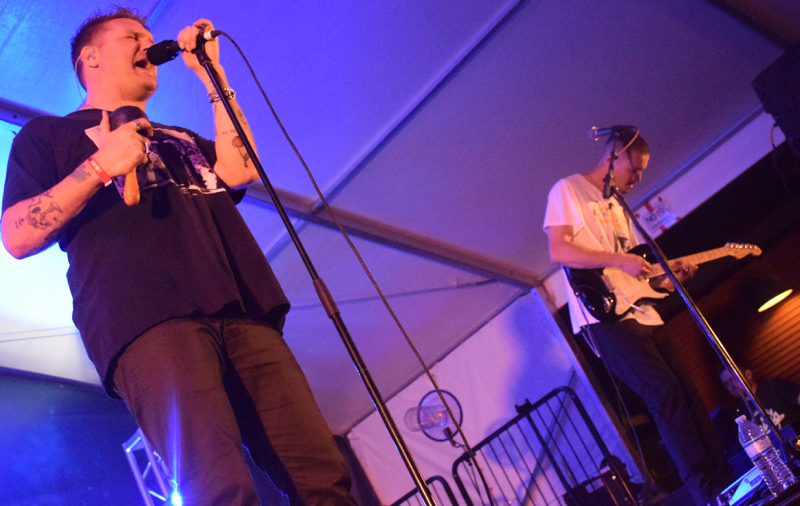 While the StubHub Next Stage is in theory for up-and-coming, ‘next’ bands, its headliner on Thursday were veterans Cold War Kids. One can forget that they’re a big draw, but they have a broad appeal from mainstream to indie, hard rock to adult contemporary – thus the big lines outside of Banger’s, even for badges (and trouble for VIPs – see below). And if Cold War Kids’ oldest songs are still their best & always will be, they also still have great energy. 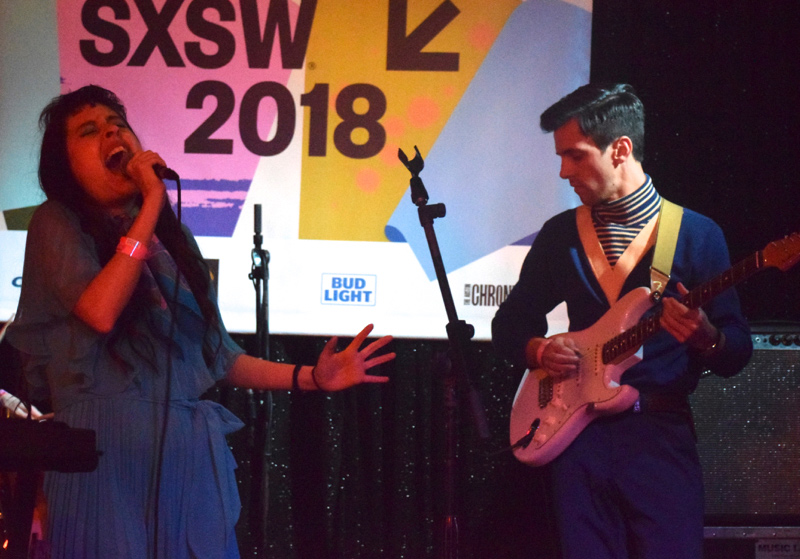 If you don’t have the big money like StubHub or Mars, if you’re not a major label, your official showcase can end up in smaller, not-normally-music-venues, as well as outside of the Sixth Street/Red River/Rainey area. Such was the case for New West Records, who were well to the west, upstairs at Lambert’s. Your correspondent also was there at 1:00 AM, for Houston’s Wild Moccasins.

Having first met the band way back at SXSW ’09 while talking to the late Harlem Shakes (QRO photos), yes, Wild Moccasins have gotten older, but from a quite young start (what that says about your correspondent’s age is better left unsaid…). Yet they still have a young, disco-emotion sound, particularly frontwoman Zahira Gutierrez, even if guitarist Nicholas Cody has aged into being a twenty-something. Watch out for their new album, coming soon.

-After not sleeping Monday night and drinking too much Tuesday night, got a late start on Wednesday.

-Does liking the white chocolate Twix over the dark chocolate mean that your correspondent is racist?

-The person with the VIP list at StubHub Next Stage didn’t have your correspondent’s name, despite it being the same Culture Collide media list as TWIX House of Duos. Perhaps from being asked at midnight, but gave only one page of the many-page list just a cursory glance, in the dark. Thankfully, your correspondent got in via his SXSW badge & there was a photo pit, and even was told by Culture Collide was on the list, but when tried again, while the main act was still on, the VIP entrance was closed and the hard-working list person had left for the evening. #FirstWorldProblems