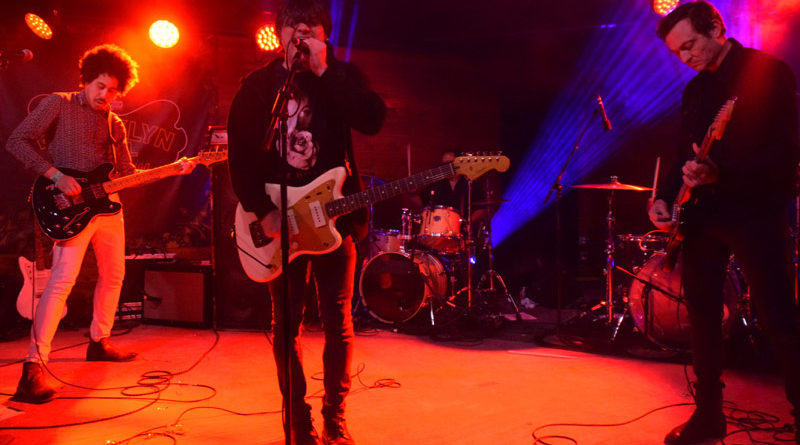 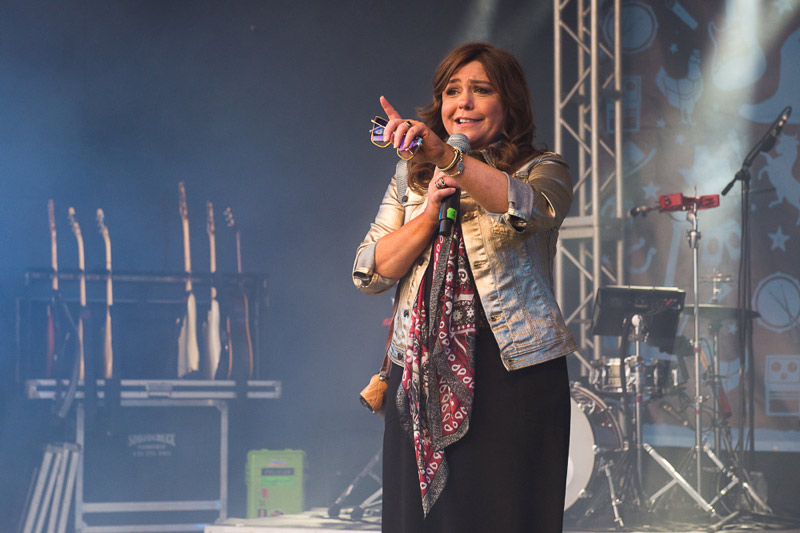 South-by-Southwest Saturday can often be a lighter day, despite being on the weekend, as some acts leave early. But there’s always one big must-see day showcase, Rachael Ray’s Feedback at Stubb’s. It took a little while for the place to get packed, but just about everyone there was on the food line that snaked seemingly everywhere, including by the toilets. 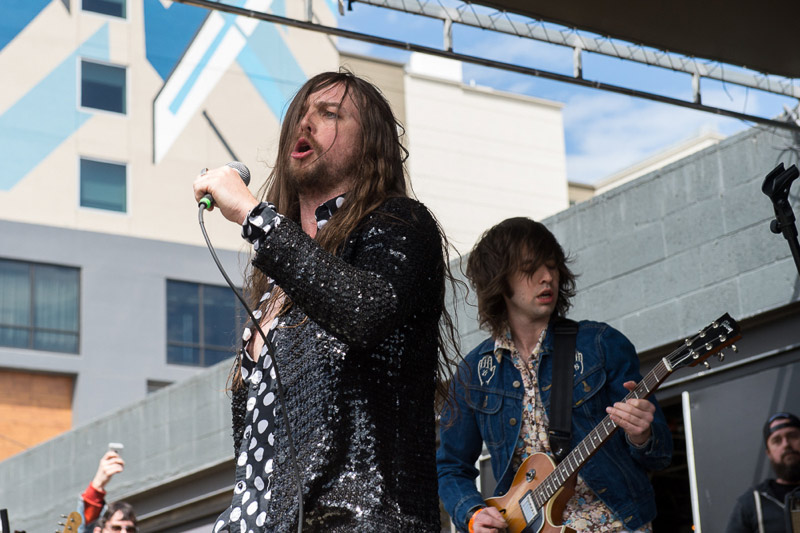 Admittedly, Rachael Ray isn’t going to lean experimental or away from good times, and bringing the party-rock was Palm Palm, who had a late nineties country-rock party almost reminiscent of Kid Rock (if not that extreme). Of course, they are fronted by J. Roddy, of J. Roddy Walston & The Business (QRO photos at SXSW ‘14). 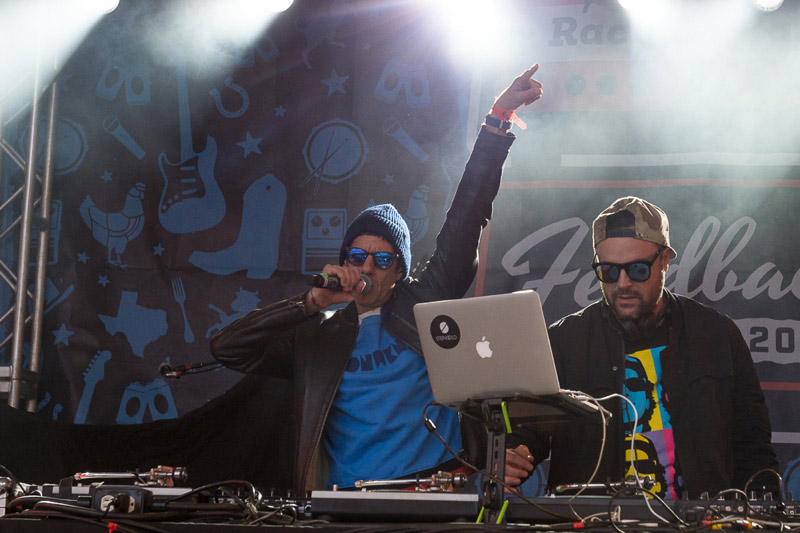 We all love and miss The Beastie Boys, so we’ll even take a glorified DJ set from Mike D. But wasn’t fellow surviving Boy Ad-Rock also in town earlier, for them to talk about their trio and new documentary by Spike Jonze? He couldn’t have joined Mike D on stage, even just to pay tribute to the late MCA? 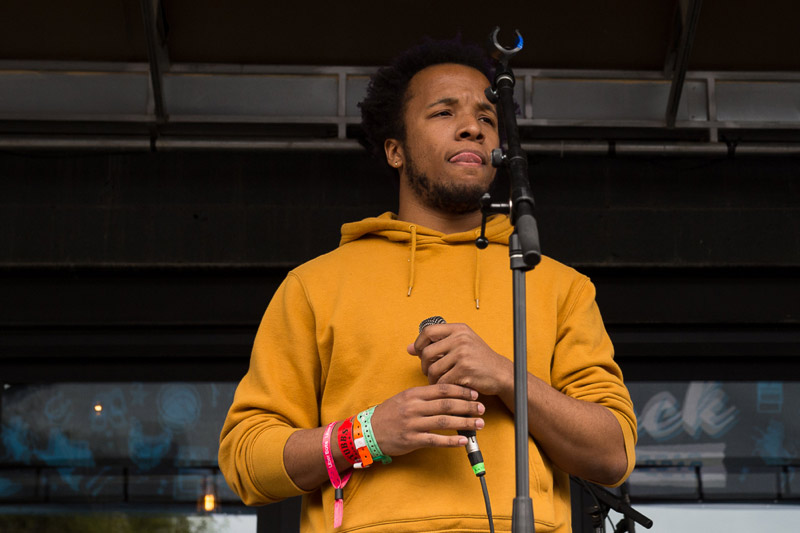 Maybe the biggest ‘One to Watch’ at SXSW ’19 was Cautious Clay. Not a hardcore rapper (no Nipsey Hustle…), but rather smooth R&B sounds, including him on flute! 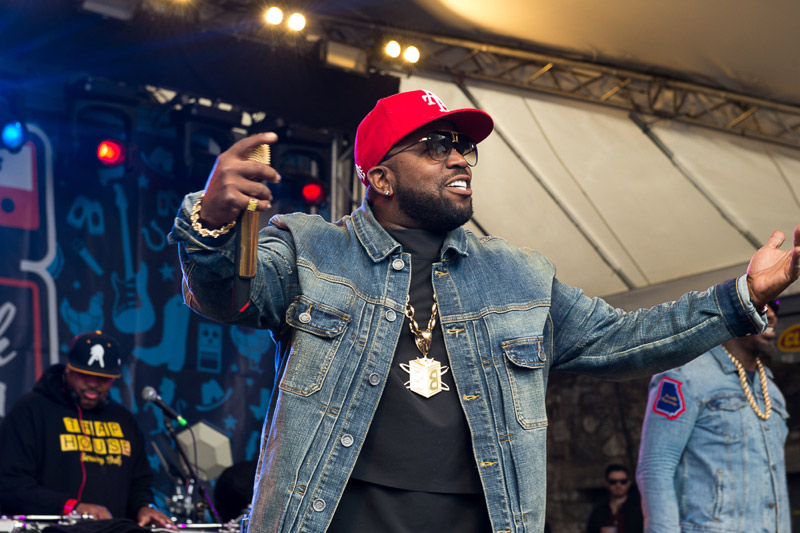 But Stubb’s got the big bass from Big Boi. He’s fashioned quite a post-OutKast career for himself, including ‘Big Grams’ team-up with Phantogram (QRO photos at SXSW ‘16), but he still does the likes of “Ms. Jackson” live. Lukas Nelson might always be ‘Willie’s son,’ but he’s been making his own name for quite a while now, and at home in Austin, he brought big country-rock party to an enthusiastic crowd. 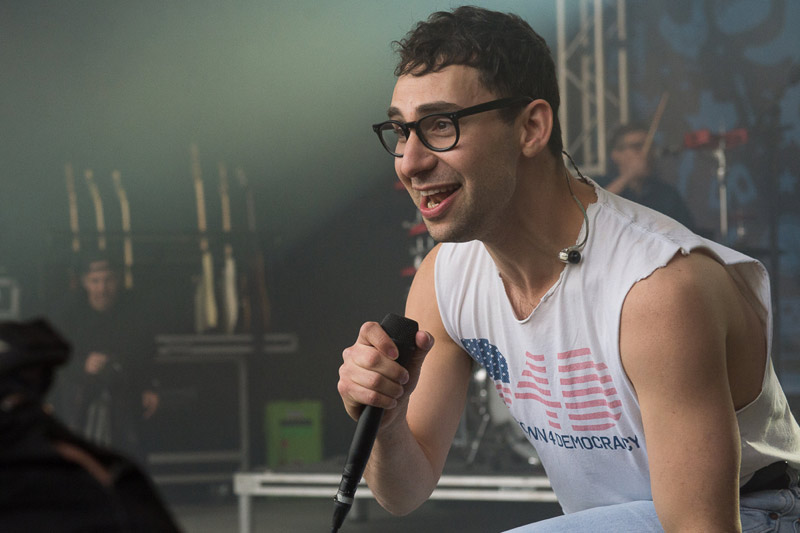 While other years Rachael Ray’s Stubb’s party has been headlined by a veteran, this year it went more contemporary, if a newer artist doing an older sound, in Jack Antonoff’s Bleachers. Yes, the once-member of the apparently defunct fun. (and recent Grammy winner for his production work on St. Vincent’s MASSEDUCTION – QRO review) and New Jersey native clearly wants to be like Bruce Springsteen, but that’s a completely understandable and even good thing to want to be. He’s the kind of artist who could unabashedly open with “Let’s Get Married”. 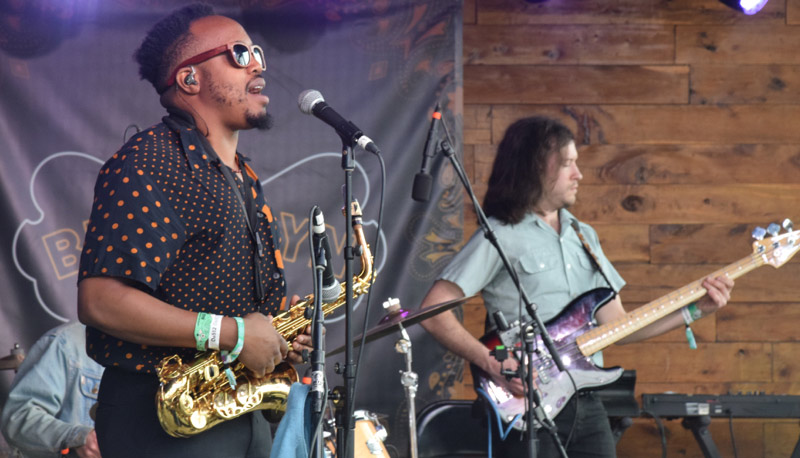 Rachael Ray’s party ended early enough to head over to Scoot Inn for the main daytime acts of the Brooklyn Bowl Family Reunion that had been happening there all week. So caught Durand Jones & The Indications again, even though DJ himself seemed a little tired by this point in the long festival. 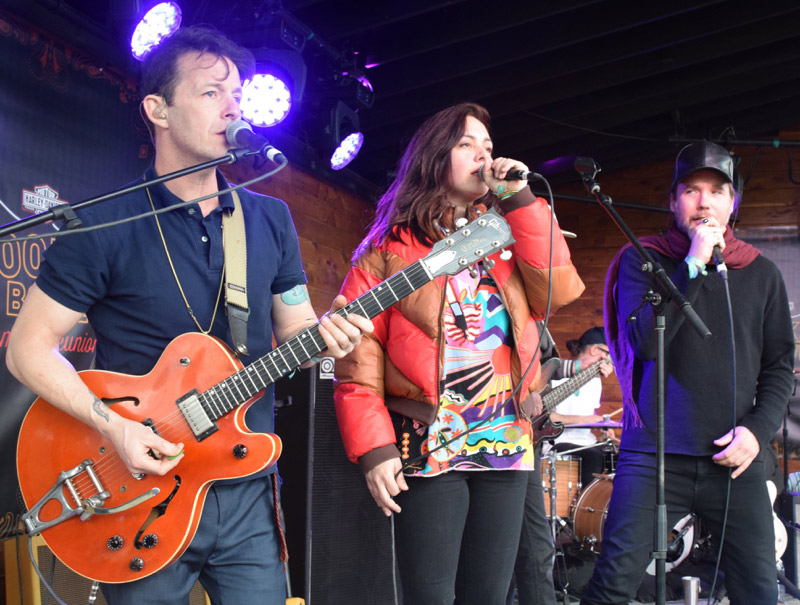 Did your correspondent need to see Broken Social Scene for a fifth time at SXSW ’19? Probably not, but there’s nothing like walking into a venue and Kevin Drew saying, “He made it…” And this was their eighth show of the festival, so wasn’t completely stalking them. Indeed, they even did “Superconnected” – because your correspondent requested it, and not because it was already on their set list…

Of course they were still so good (helped by having an actual photo pit this time). What more could be said at this point? Included Drew leaning into the crowd, doing the best he could. 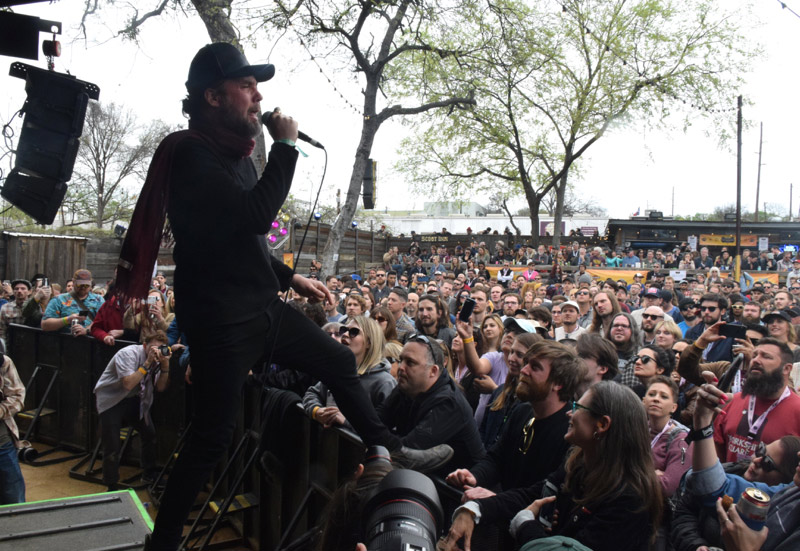 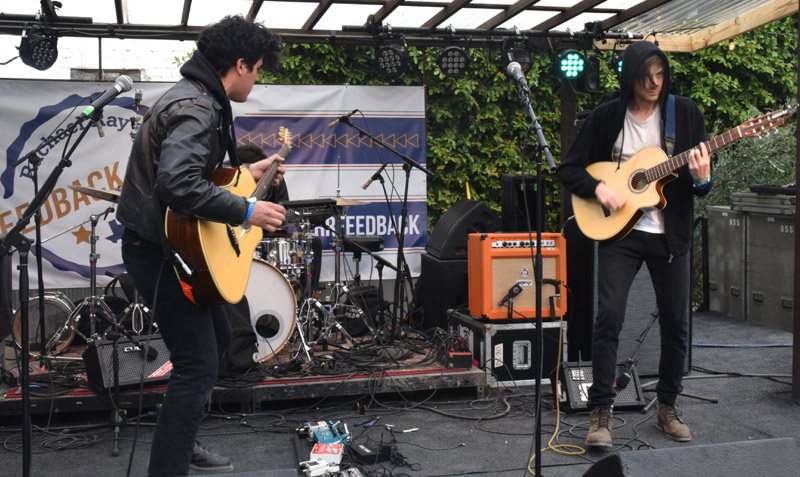 Back to Rachael Ray, this time her Feedback House, for the nicely expansive instrumental rock of City of the Sun, which went well after Broken Social Scene. Next up, Roto’s Magic Act had charming rock ‘n’ roll, if not inspired, opening with a Bowie cover, closing with a Beatles one. 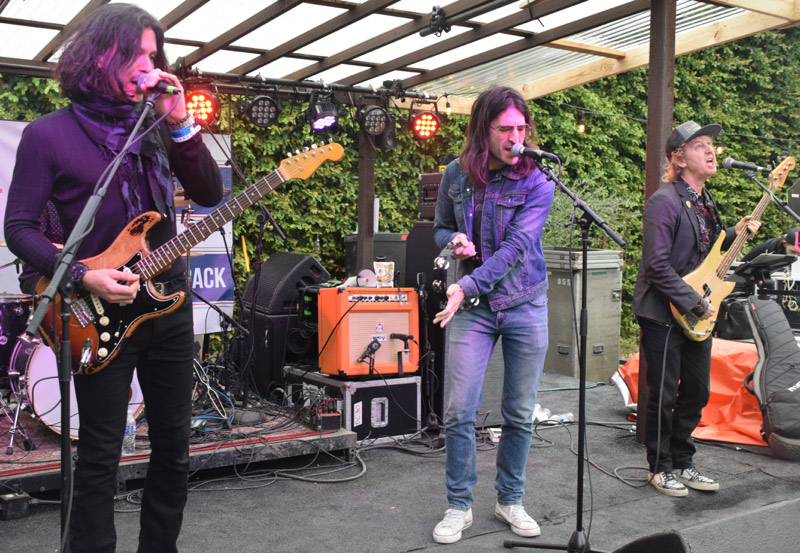 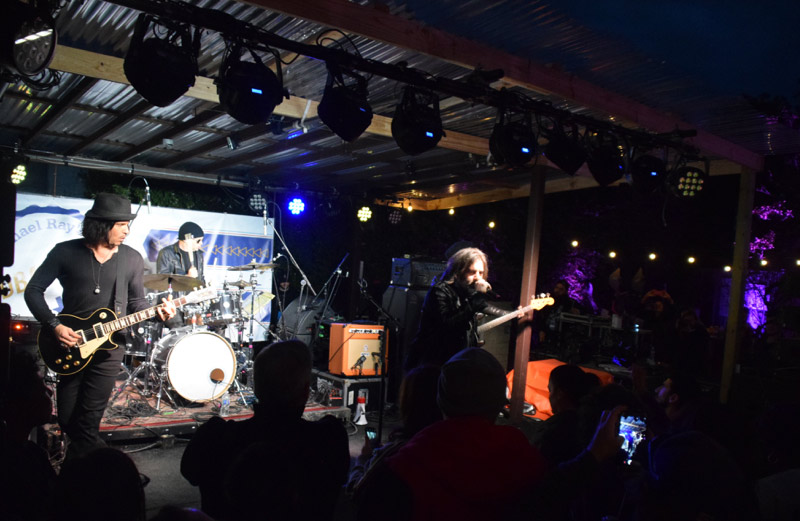 Also doing some covers was The Cringe, a.k.a. Rachael Ray’s husband’s band. If it’s nepotism/vanity project, it brings Ray and her Feedback to Austin every year, and gotta love that. The Feedback House closed with the friendly, heartfelt country of SONTALK. 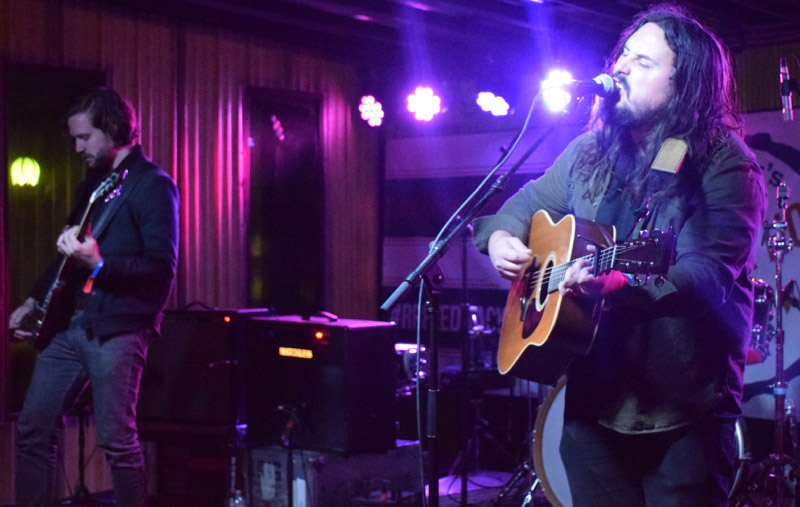 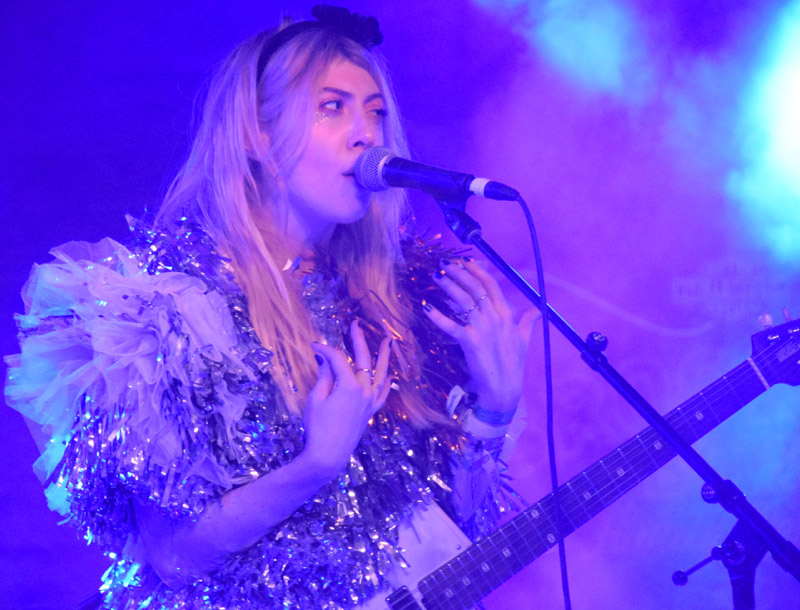 And now back to Scoot Inn for the evening Brooklyn Vegan & Brooklyn Bowl showcase. Charly Bliss had a nice electro party, quite fun. 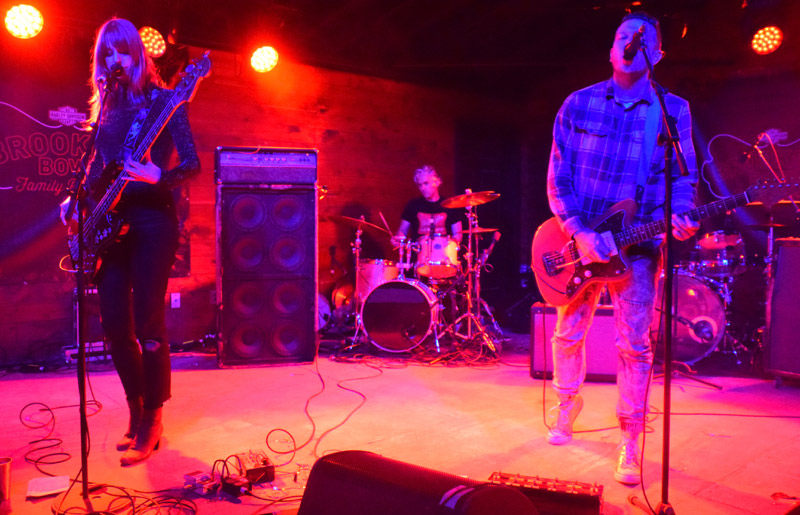 Austin’s own Ringo Deathstarr have grown over the years, from snotty DIY punks doing garage rock (QRO photos at SXSW ‘12) to a much fuller, even psychedelic (it is Austin) sound. 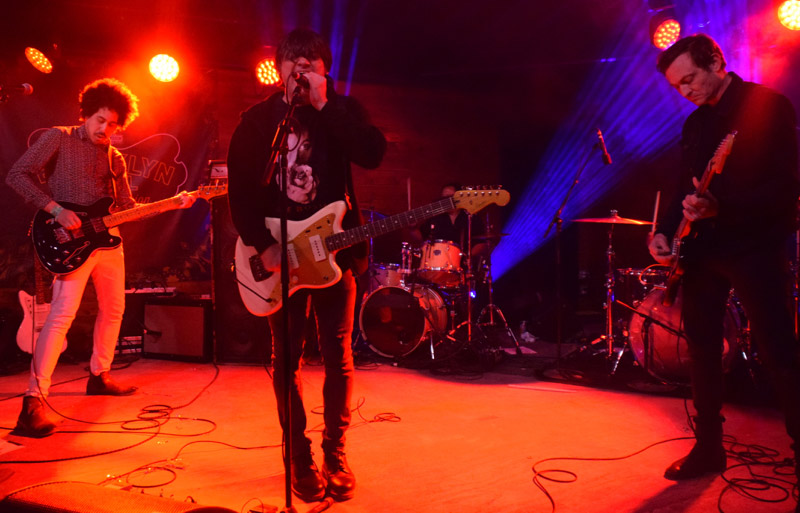 Once upon a time, …And You Know Us By the Trail of Dead were the ‘next big thing’ in indie-rock, headlining The Village Voice’s Siren Fest on Coney Island and playing Tonight Show with Jay Leno. But that was a long, long time ago, and even the draw of them playing 1999’s Madonna in full, in their hometown, was not enough to fill up Scoot Inn (and with regular tickets only five dollars, basically the minimum to say it wasn’t a free show).

-There were some shootings late Saturday night on the east side of Austin, because people are always going to ruin a good thing. South-by-Southwest has had its issues with violence, from the Austin bombings occurring around the city before & after last year, to the driver crashing into people on Red River in 2015. Hopefully this will not dissuade people from coming to the festival, or the city from having the festival.