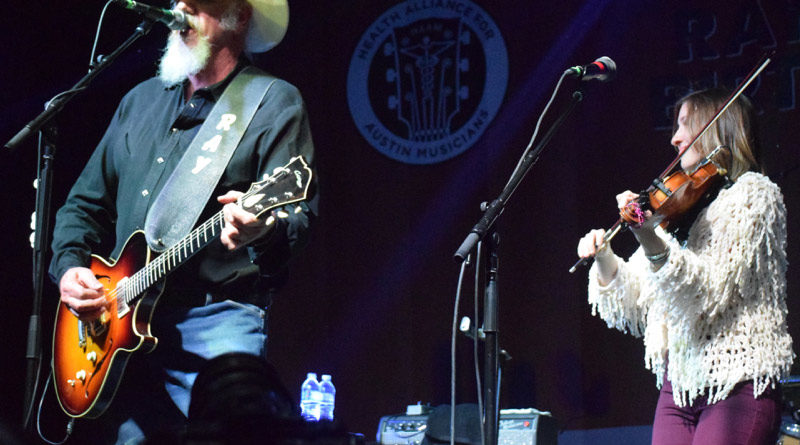 Cedar Street Courtyard is a particularly nice place to see a set during SXSW, outdoors but with a roof and walls, indoor side bars that let one sneak up front or sneak to the back, and not a dive bar. FLOOD Magazine brought their two-day ‘FLOODFest’ to it, along with a VR experience in both indoor bars, ‘Magic Leap presents Tonandi.’ 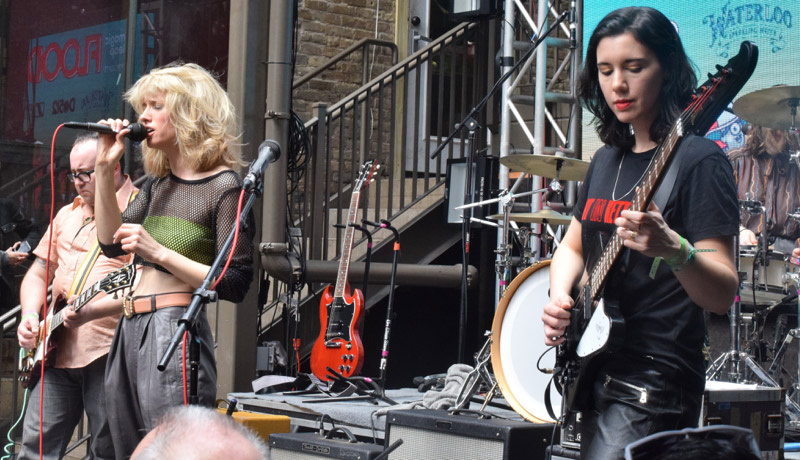 Priests sounded pretty much exactly like you’d think a band called ‘Priests’ would sound, gothic electronics. Admittedly, if they were male-fronted, one would expect gothic metal. Either is a little odd in the daylight. 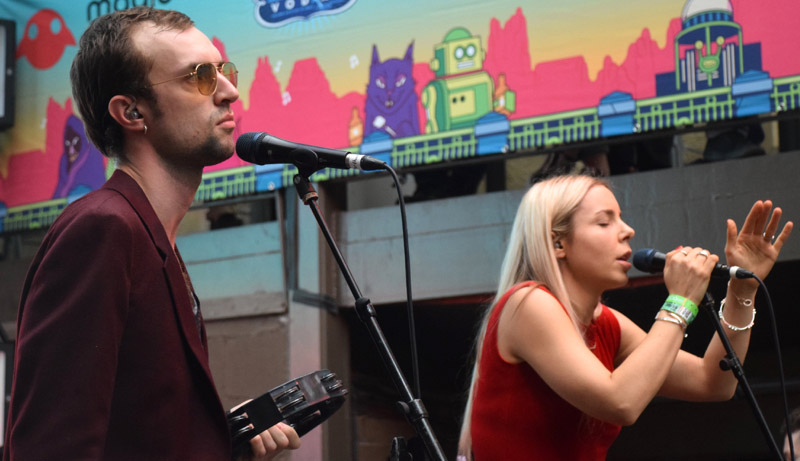 Coming to SXSW behind their upcoming new album, Any Random Kindness, HÆLOS brought sweeter sounds, dance both dark and light. 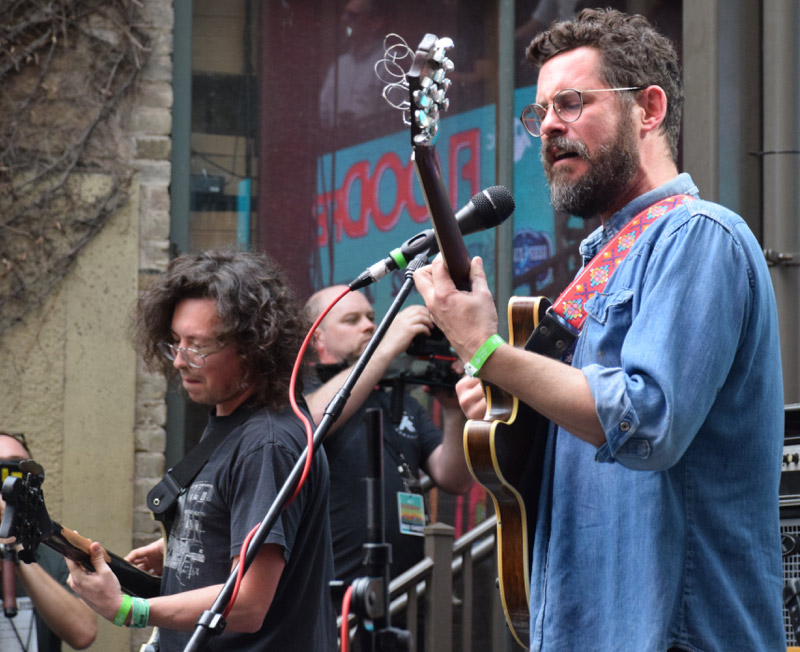 Locals White Denim had great energy and were nicely jam-rocking, including extended jam. 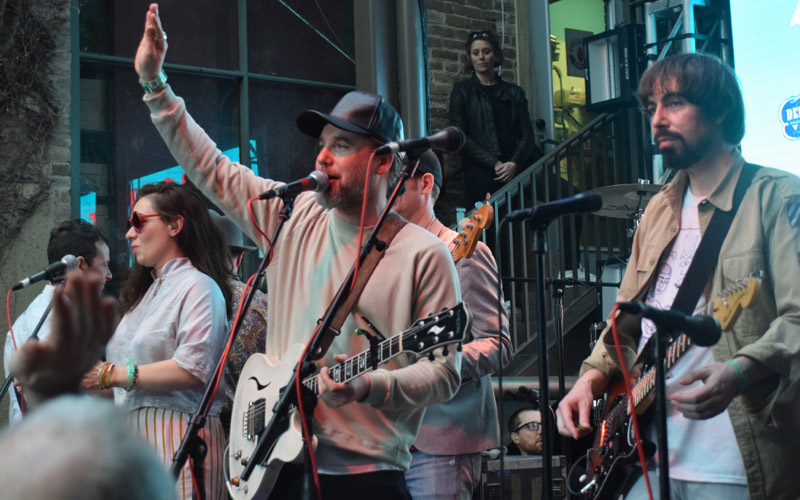 One of the biggest bands playing SXSW ’19, certainly one of the biggest playing multiple shows, was Broken Social Scene. Yes, it’s been years since the Canadian alt-stars broke out of Toronto in the ‘Canadian Invasion’, but unlike many they’ve kept going and kept up the quality [cough-Arcade Fire-cough]. They do sometimes disappear as the various members do their various side projects, but the Scene was back at SXSW behind their new EP, Let’s Try the After Vol. 1 (QRO review).

BSS are veterans by now, and have played SXSW before (QRO SXSW ’10 photos), but frontman Kevin Drew joked about not having their visas the first time ‘round, in ’04. Only touring an EP meant that they were mostly drawing from their whole discography; it was a little odd to here “Texico Bitches” called an “old one” when it was ‘only’ from 2010’s Forgiveness Rock Record (QRO review). Yes, they do all look like your hippie uncle (or cousin, if you’re old enough to be an uncle yourself) – save for singer Ariel Engle (QRO interview), who’s the cool girl you still can’t to… 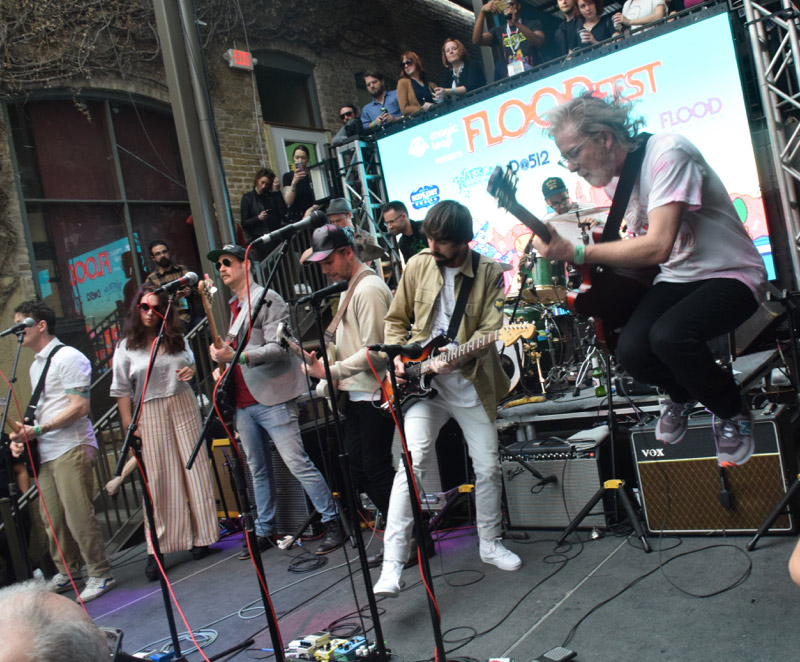 One of the biggest presences at SXSW, one of the biggest companies in music, is arts rights management company BMI. They’re the ones who do the boring-but-necessary (and most profitable) job of getting artists paid when their songs are used in commercials, movies, television, etc. For SXSW ’19, they, the Health Alliance for Austin Musicians, which gets Austin musicians health care coverage (like a recent life-saving heart transplant), and sponsors put together a great big event celebrating the birthday of Austin music legend Ray Benson, frontman for Asleep At the Wheel.

Taking over the large courtyard at GSD&M (which has nothing to do with BDS&M…), there was a full-fledged outdoor stage, food trucks, and for VIPs (including your correspondent) not just free drinks but free nachos & pizza, even tables to sit and watch the show, making for a very strong evening. 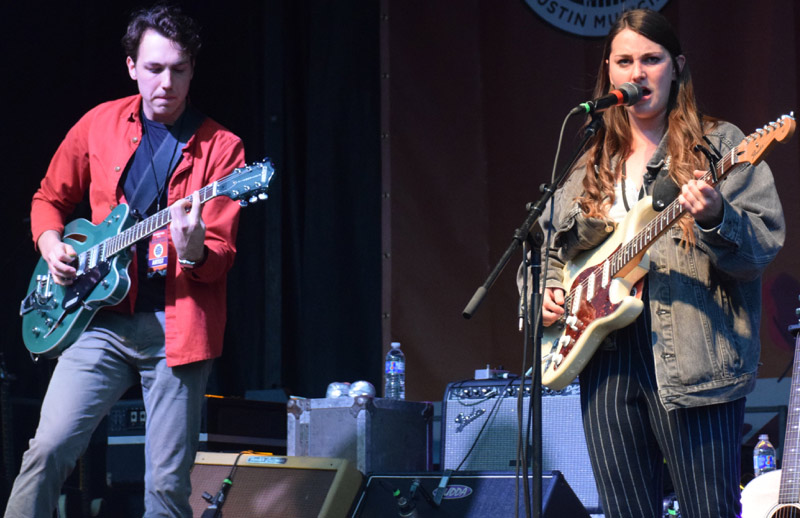 First on the stage was Katie Pruitt, a country gal having fun, though she did have to deal with playing while people were arriving, and still in the sun. 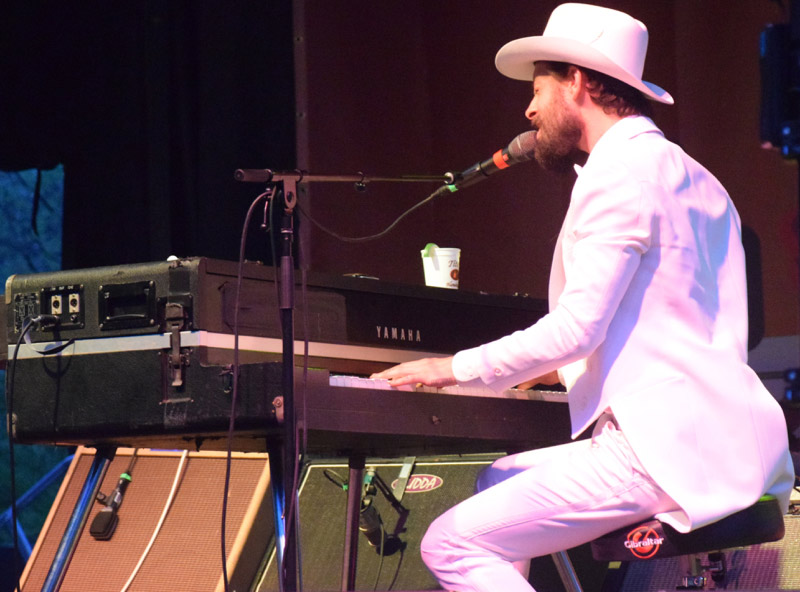 But nighttime had set for Texas Piano Man Robert Ellis. Yes, his music was fun, but one couldn’t help but focus on that all-white suit, reminiscent of when Homer Simpson endangered his marriage to manage Lurleen Lumpkin (Beverly D’Angelo) as ‘Colonel Homer’ – as Bart said, “As much as I hate that man right now, you gotta love that suit.…” 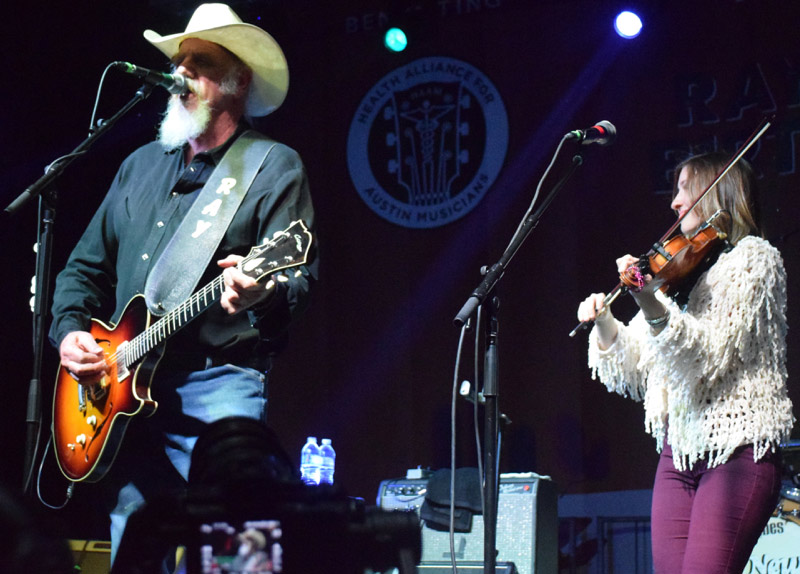 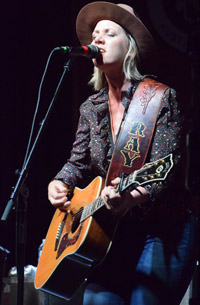 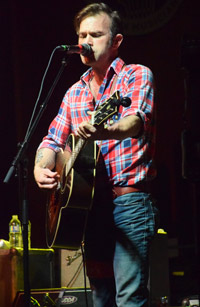 But the main gig was, of course, Asleep At the Wheel. While they may not be well known outside of country circles (yes, there were young hipsters saying, “Who is Ray Benson?”), they’re legends in Austin, including playing every Austin City Limits Festival ever (QRO ACL ’18 recap). Their set includes “Miles & Miles of Texas” and “Route 66”, plus a birthday cake brought out for Benson (whose actual birthday wasn’t until Saturday the 16th) – a cake that had been bought fifteen minutes earlier at an H.E.B. supermarket, because the massive one in the shape of a guitar made special was incorrectly ordered for next Tuesday (that’s what happens when SXSW is a week early…). 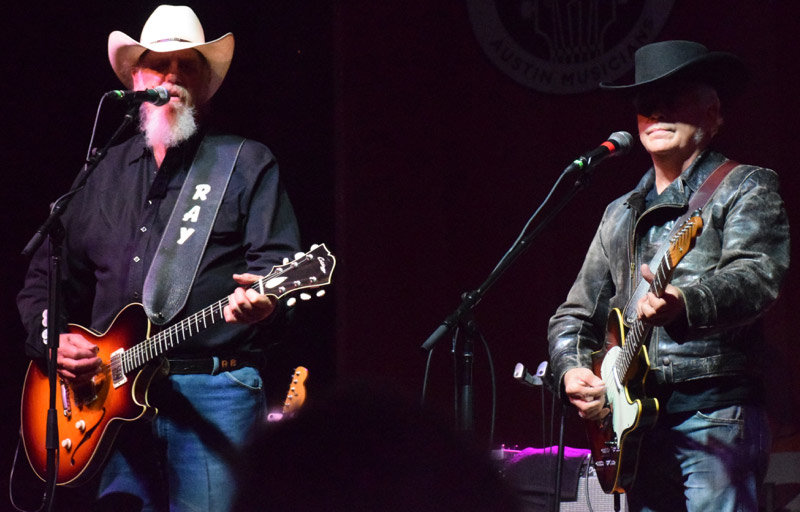 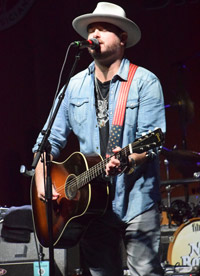 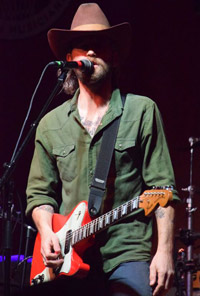 Asleep At the Wheel themselves brought a slew of great guest stars (enough to tire your photographer…). There were younger artists like Jamie Lin Wilson, Ben Dickey, Waylon Payne, and Wade Bowen. Maybe the best chemistry between Benson & guest was with veteran local Dale Watson, “Feeling Haggard”. There were people from outside the strictly country world, Chris Shiflett of Foo Fighters and Ed Roland of Collective Soul (yes, they did “Shine”). And there were bigger country names Randy Houser and Robert Earl Keen. 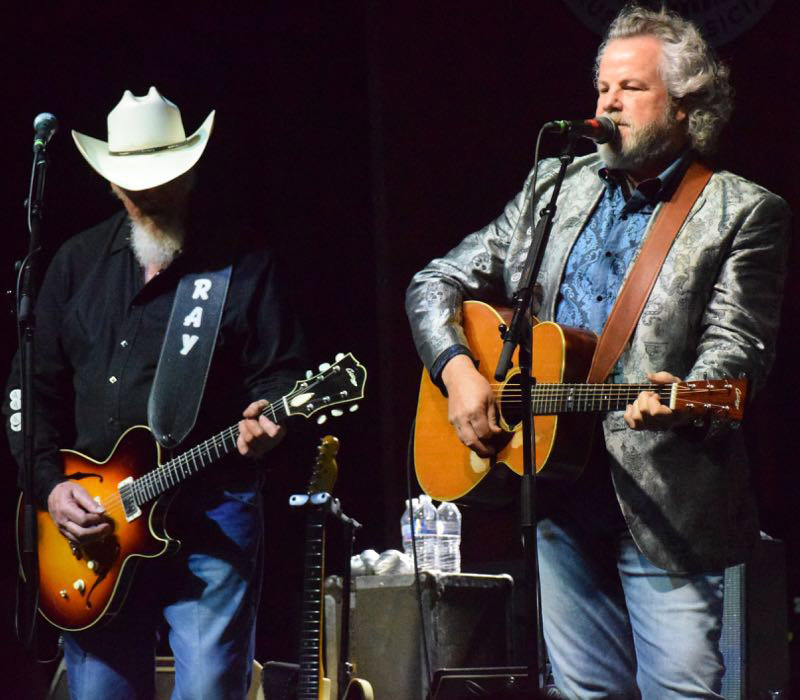 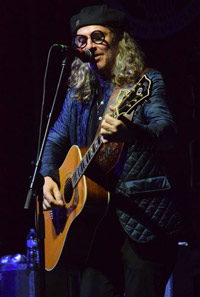 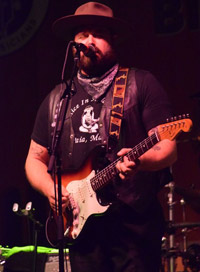 But Asleep At the Wheel closed it out themselves, with a big fun finish.

-The lock on one of the unisex full-door stalls at Cedar Street Courtyard wouldn’t open, causing your trapped correspondent to freak out, until his knocks for help were answered by another bathroom-goer, who knew the trick to getting the stuck door open.

-Joan Jett & The Blackhearts @ Stubb’s. Closing party for SXSW Interactive with big name (and reportedly open bar), but too spent by this point.