Everything from an Instagram outage to a 'Shameless' party came on Hump Day.... 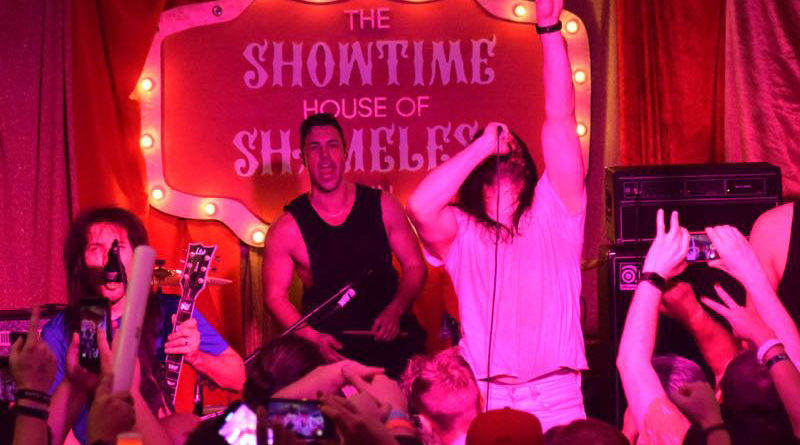 Hump Day at South-by-Southwest can be a challenge, but making it extra challenging in 2019 was that both Facebook and (subsidiary) Instagram went down, along with some other social media sites (but not Twitter). Why? We still don’t know, but QRO’s many posts only went through at the stroke of midnight (ironically while talking to someone from Facebook, who was getting angry messages from his friends about the outage, as if he could do something about it…).

Wednesday also had to deal with flight cancellations, as the FAA finally followed the rest of the world and ordered the grounding of all of the trouble Boeing 737 Max Bs.

One daytime showcase definitely stood out – so much so that it appeared that it would be impossible to get in. Paradigm Agency’s day party at Mohawk had a headline set from Chromeo, but just a DJ set – but then Chromeo had to cancel (likely due to grounded planes), so Broken Social Scene was added at the last minute.

Also at the last minute? Your correspondent getting VIP access to the event, literally right after saying it would be too difficult to get in normal. The VIP balcony had open bar & free BBQ & more (see ‘Other Notes’ below). 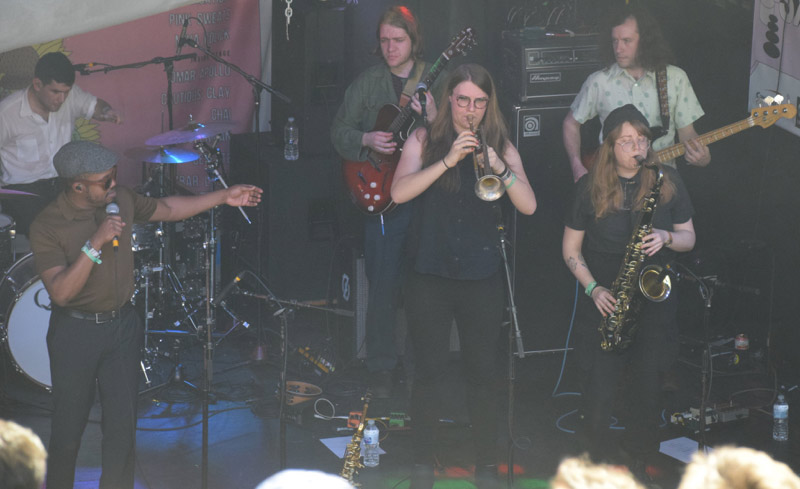 The last act QRO caught at SXSW ‘18 was Durand Jones & The Indications (QRO ’18 photos), and since then they’ve seriously blown up, with new album American Love Call & playing many shows at SXSW ’19. Yes, it was early, but they still had a big, enthusiastic party. 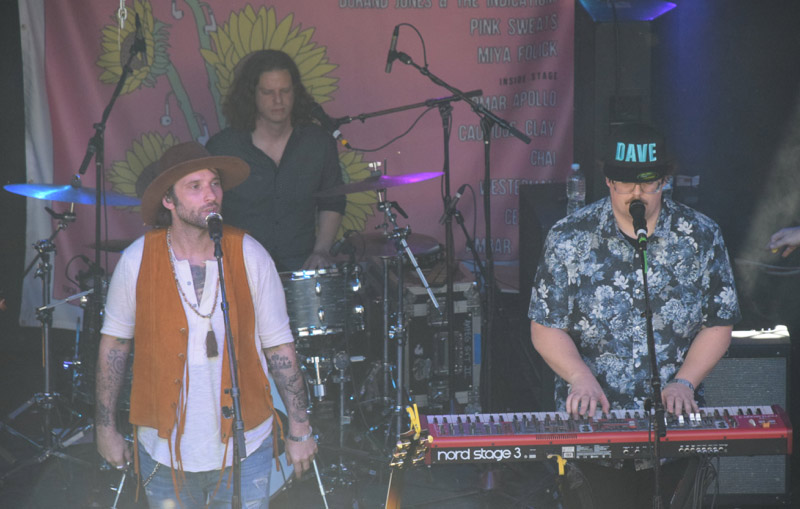 Another big act with a big sound were The Strumbellas. Their collective uplift actually reminded of headliner Broken Social Scene, if those fellow Canadians instead hailed from Austin. 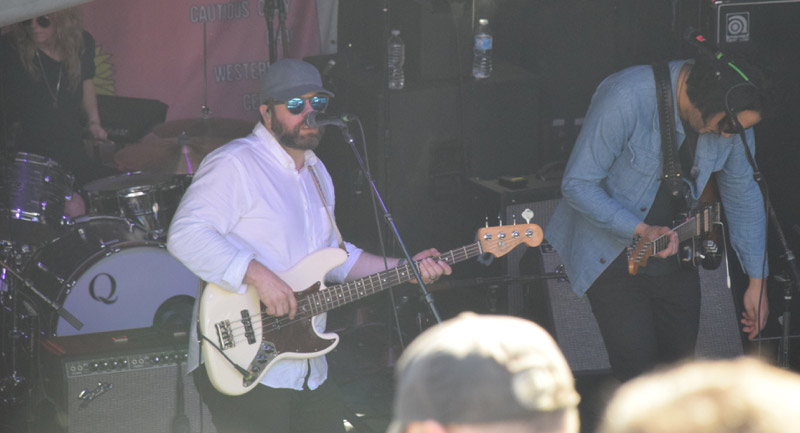 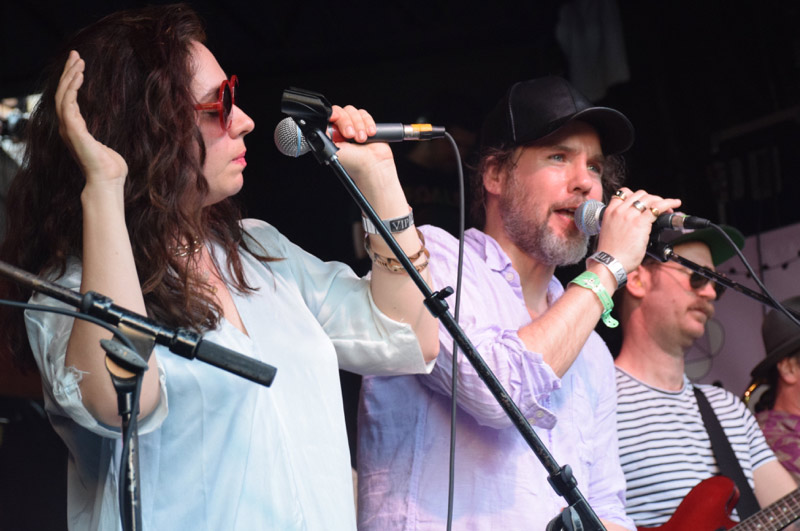 A last-minute announced gig, and Broken Social Scene still didn’t have all their gear, but of course it was still great. Indeed, no comment on Chromeo as an act, but band gigs beat DJ sets every time. It was a little awkward up there for BSS, last-minute and not fully geared (they need a Jon Glaser…), but still fun, including early pieces “Stars and Sons” and “Fire-Eyed Boy”. Frontman Kevin Drew (who passed the mike off to guitarists Brendan Canning and Andrew Whiteman, respectively, for those two) joked about how many scooter accidents he’d seen in the last 48 hours, advising Austin against using them. 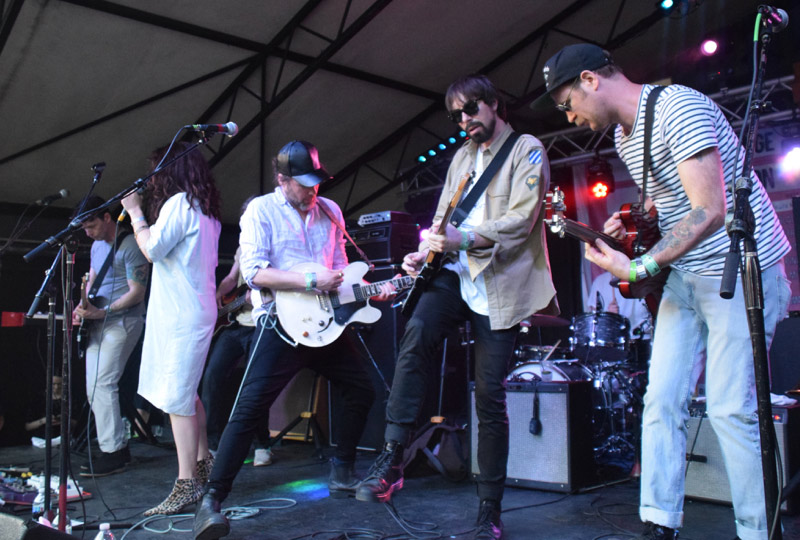 Searching in the evening for free drinks and something different, ended up at the Finnish Home Party, a party sponsored by the nation of Finland that was in a literal home. It made for an unusual of awkward arrangement, a house next to a vacant lot on the East Side, with tiny rooms inside, arrayed around a small space in a square hallway, which one could see from four different rooms. But there was also free Arctic Blue Gin (at least until it ran out) and Pulled Oats faux meat tacos. 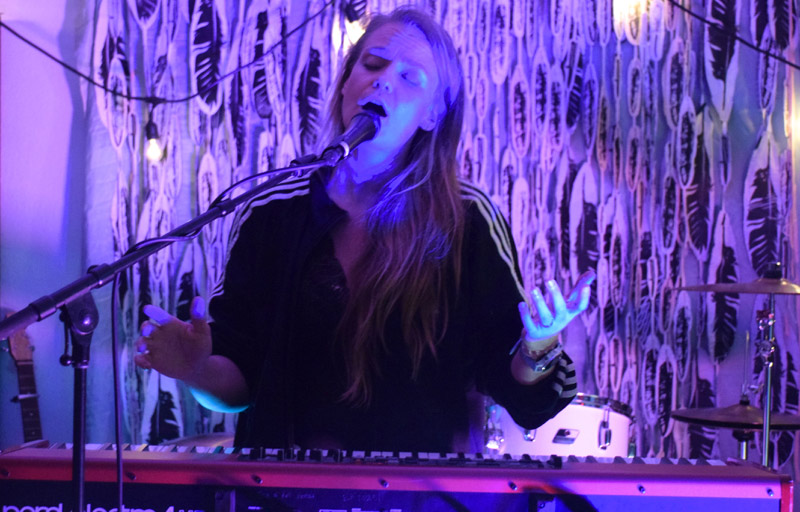 The tiny room lent itself to solo artists, like New Silver Girl, the enchanting songstress Anni, and the more sophisticated GEA. 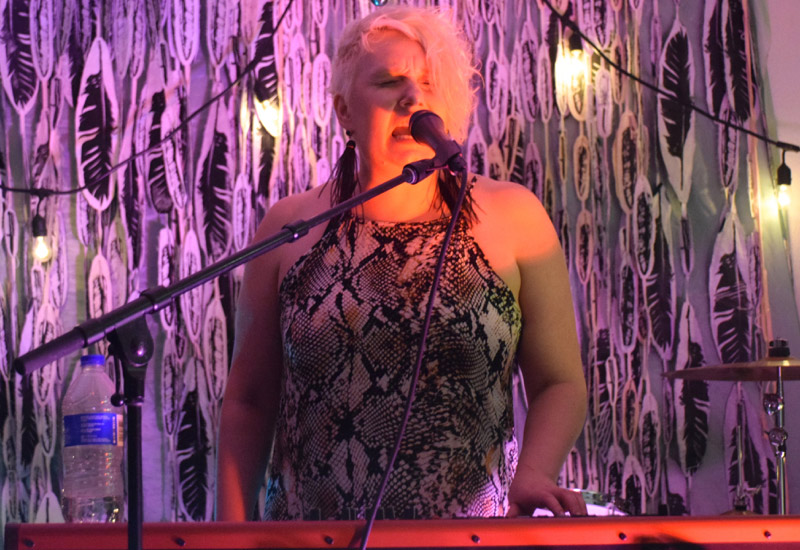 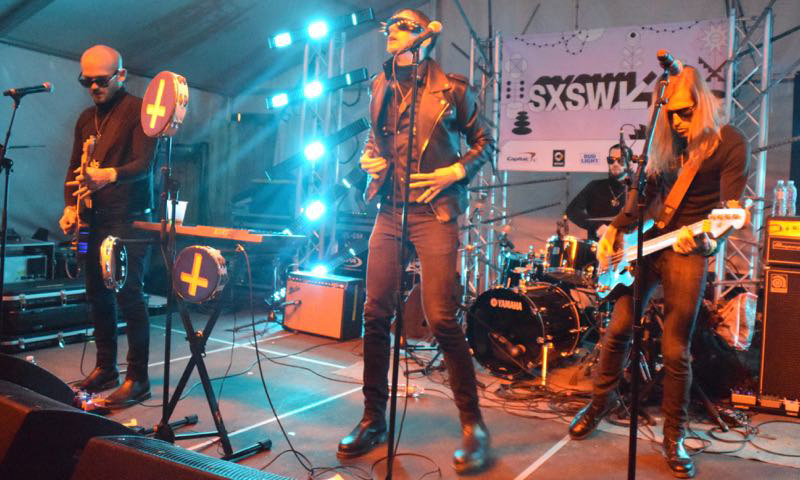 While Sixth Street is the most famous area of SXSW, Rainey Street gives it a run for the money, with multiple venues all clustered very close together (and the streets blocked off to traffic). Thus it was easy to hit up a ‘regular’ showcase, by Dine Alone Records at Rainey’s Bungalow. Started with DRAKULAS, big goth-rock that certainly apes being very big. 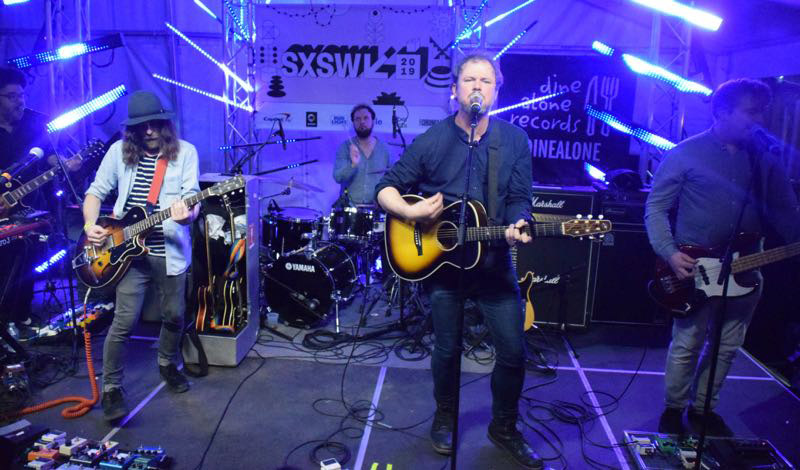 But came to Bungalow for Wintersleep. They do the strong indie-rock that people don’t make so much anymore – but with country elements, ‘cause they’re from Canada… 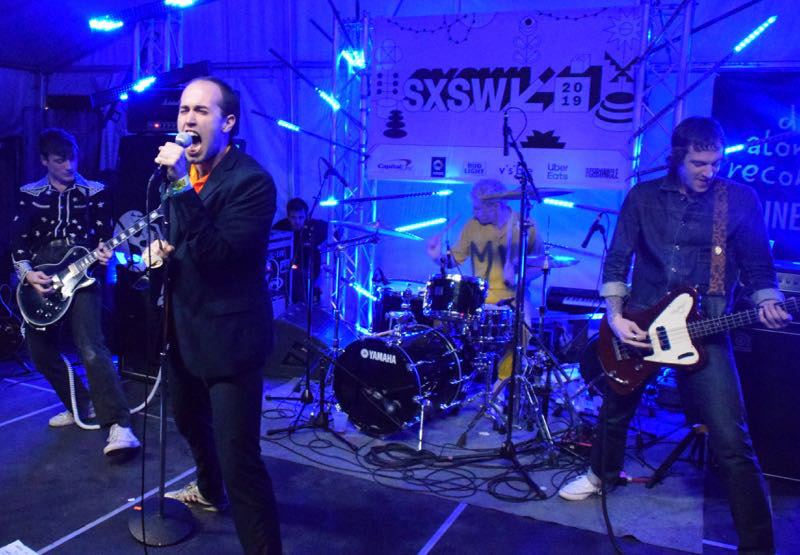 Leaning heavy on the fun was the punk rock of The Dirty Nil. They have the kind of party that you wouldn’t expect from a band with a balding singer/dancer, but were very excited. 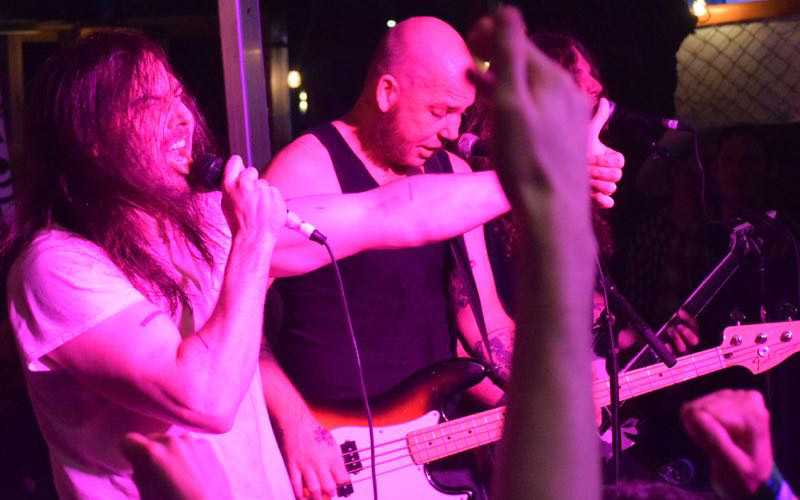 But there’s no one more enthusiastic than Andrew W.K. Playing Culture Collide & Showtime’s ‘House of Shameless’ at Clive Bar, that show is in a rather unfortunately spotlight, from Emmy Rossum leaving to co-star William H. Macy’s wife Felicity Huffman wrapped up in the college admission cheating scandal (a truly Desperate Housewife…).

But when it comes to partying, Andrew W.K. admitted that he is “Shameless.” Of course it was a full party from the party maestro, including giant foam Shameless glowsticks, and he’s pretty much the perfect act to play the Shameless party. He did a countdown to the post-midnight party – countdown from 100, seemingly that long so he could give the mike to a fan to say, “69” (and some other numbers)… 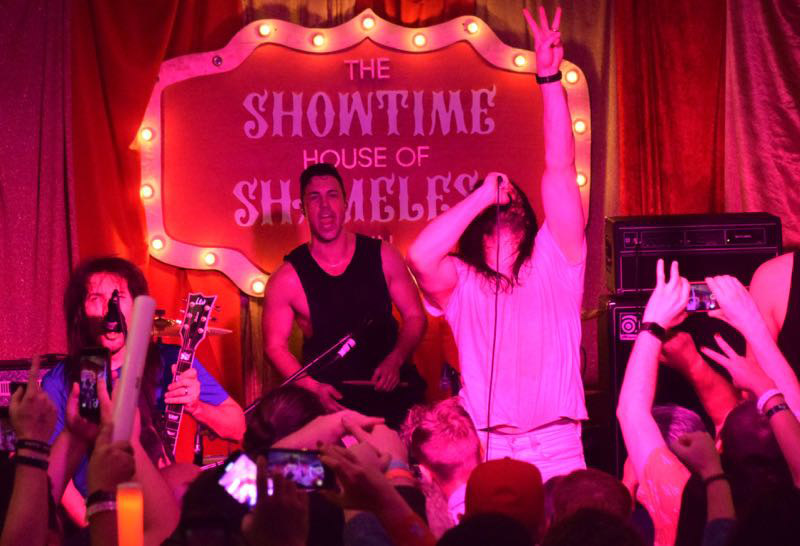 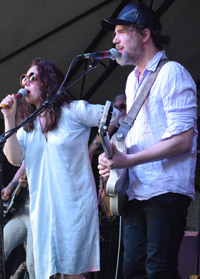 -Your correspondent is a huge Broken Social Scene fan, including having interviewed members Brendan Canning (QRO interview), Ariel Engle (QRO interview), Charles Spearin (QRO interview), and Andrew Whiteman (QRO interview) – but never main man Kevin Drew. So of course he took the opportunity when spying them in the balcony VIP at Mohawk to say hello/stalk. He started with Whiteman, who was all alone, but later felt bolder to talk to Engle, Justin Peroff, and Spearin, plus later Sam Goldberg, when they were in a group.

This all led to Drew simply walking up to your correspondent and asking him what they should play on this just-announced set. Your correspondent flailed, trying to pick a ‘deep cut’ – and not something from breakthrough You Forgot It In People, which they were doing in full the next night – eventually literally saying, “Play one of the songs where someone else sings, like Brendan or Andrew or Ariel.” Drew was kind enough to translate that into Canning-sung “Stars and Sons”. It would not be the last time your correspondent would fan-boy encounter BSS.

-Cautious Clay @ Mohawk Indoor, 4:00pm – 5:00pm. The much smaller inside space at Mohawk was spilling out, beyond capacity, for this ‘one-to-watch’ of SXSW ’19.

-The Joy Formidable @ Latitude 30, 5:30pm – 6:30pm. Really wanted to see how the British Music Embassy at Latitude 30 was holding up, weeks away from no-deal Brexit. Just don’t bring it up in front of an out-of-country Briton, as they’re sick of hearing about it & hoped to get away from it by leaving the country – think of an ex-pat American still having to hear about Trump…