I was unprepared for South-by-Southwest.

Out-of-towners would roll their eyes, but even as a local, living minutes from downtown, my first day was pretty challenging.  A dead Rebel, forgotten cell phone, dead point-and-shoot camera, and little rest left me unprepared for the trying (but rewarding) festival.  Nonetheless, I joined the throngs of doe-eyed music lovers still fresh and energized for the legendary music portion of SXSW with an optimistic and eager outlook for the week.

After previous experiences venue-hopping and ending up more frustrated with lines and experiencing the band from outside of the actual concert, I decided on a different approach for this year’s festival – picking a showcase or day party and staying there.  Did I make sacrifices for convenience?  Probably.  Did I see some really good and unexpected shows while simultaneously maintaining concert composure?  Definitely.

We had a trio of correspondents covering South-by-Southwest in 2010: Abby Johnston, Robin Sinhababu and Ted Chase.  This is Abby’s recap of Day One; Robin’s is here, and Ted’s is here.

Emo’s outdoor stage, although paramount in sound quality and production, is not conducive for the type of crowds that South-by-Southwest brings.  The angles are good for anyone within ten feet of the stage or ridiculously tall, but aside from that you’re put at a disadvantage.  The audience was thick for Austin locals Black Angels, flowing onto the back steps and into the rigid bleachers.  The Black Angels’ smooth psychedelic guitar licks poured over the masses, relieving the animosity that close proximity brings.  The Angels play with all of the confidence and swagger of The Velvet Underground, the band whose song inspired their and name.  Overall, the inaccessible psych-rock fits easily onto the main stage when directed by the Angels’ careful, sleepy control. 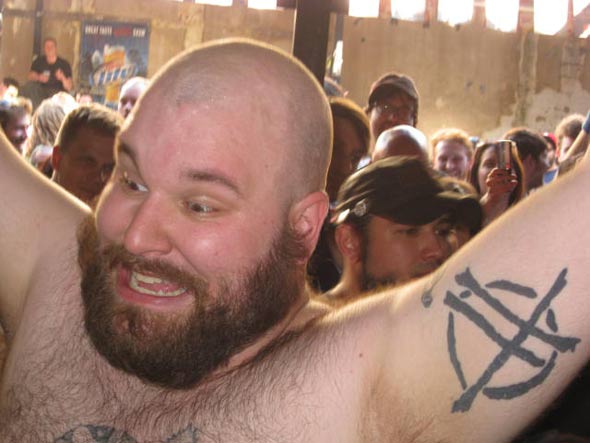 Click here for photos of Fucked Up at 2009 Pitchfork Music Festival in Chicago, IL in the QRO Concert Photo Gallery

Click here for photos of Fucked Up at Williamsburg Waterfront in Brooklyn, NY on July 12th, 2009 in the QRO Concert Photo Gallery 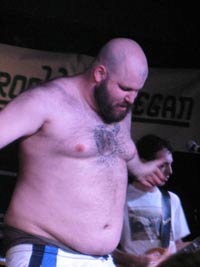 GZA was scheduled to follow Black Angels, but canceled citing airport trouble.  This considerably thinned the crowds, allowing me to push my way to the front for a much-anticipated performance by the Canadian hardcore band Fucked Up.  Usually, any band classified as hardcore is an automatic deterrent in my book, but Fucked Up’s clever musicianship has roped in unacquainted audiences and forcibly charmed them with their unique hardcore punk style, myself included. 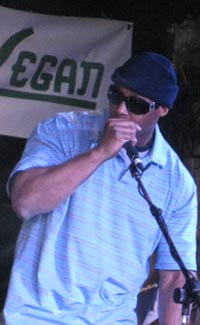 Damian Abraham and his unassuming posse stormed the stage with the appearance of a blue-collar gang gathered for a weekend outing, but the punk veterans quickly outshone their common appearance with a delicious, bombastic show.  Abraham wasted no time shedding his shirt, divulging that a show played at Emo’s many years ago was the first place he appeared shirtless for his fans. 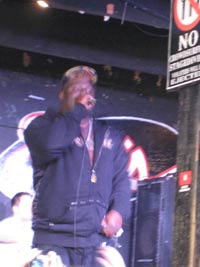 After some whispers from the stage manager between songs, Wu Tang Killa Bees Killah Priest and 9th Prince joined Fucked Up in a surprise appearance.  Sent in place of GZA, Killah Priest and 9th Prince may not have had the same draw as their Wu Tang brother, but still pleased the Wu Tang fans that hadn’t stormed out in a rage.  Fucked Up handled the set disruption flawless, falling easily back into their zone.  The band ended the set with Abraham running through the crowds, screaming into delighted fans’ faces and allowing people to beat on his exposed belly.

There is nothing not to like about Dawes.  They have a sunny laidback style and a positive, sunshine-and-rainbows message.  It isn’t long, though, that the guitar styling sounds contrite and the lyrics sound more like a creatively sapped John Mellencamp.  As much as I wanted to like Dawes, the formula has been exhausted beyond the point of forgiveness.  The only new element the Brooklyn Vegan opener offered was the lead singer’s bizarre, strained facial expressions, which were accentuated by unintentionally grating harmonies before the group got their vocal bearings.  There was, however, an impressive crowd sing-a-long for their single, “When My Time Comes”.

Perhaps it was practice, perhaps it was the pre-show poetry reading by Thax Douglas, but whatever it was, Here We Go Magic showed considerable performance improvement from their last Austin show.  Although front man Luke Temple is no stranger to performance, the group’s cohesiveness was still in question at their sludgy ACL performance (QRO recap).  The extra months of togetherness seemed to have done the trick, making them seem much less like a group of convenient musicians and more like an actual band.  They stuck largely to material from the debut album, but showcased a few of their songs in the works.  Luke Temple’s subtle leadership pushed the band through the set, and it was beginning to look like there was a bit of camaraderie between band mates.

This Australian band is EXTREMELY hard to Google.  They have just landed in the U.S. for their first round of tours and had a lot of hype surrounding their SXSW performances.  Their Recordings of the Middle East EP might have been stunning, but their live performance could have very well been an ethereal show from the heavens.  The only drawback was their ridiculously long set-up time, which, due to the short set, they could really afford to do.  Armed with guitars, banjos, a shaker made of bottle caps on a thick stick, and everything in between, the seven members of the Middle East took to the very crowded stage for a 25-minute set.  It seems awful to try to diminish the performance into words, but suffice to say it was one of those performances where everyone just had to say, “whoa.”