En route to Austin most of the day, I wasn’t out and about until after 8:30pm.  Due to a couple great buzz bands and a lot of bloggers, however, the night may have been short, but it was definitely sweet.

After dumping my bags at the hotel, the first order of business was of course, texting everyone I knew at the festival to see what they were doing.  Just as I was leaving the convention center with my newly minted badge, I got my response: Walk The Moon at Bat Bar.

I first heard of the Cincinnati band less than a week ago, when their debut album, i want!  i want! came across my desk.  Apparently I wasn’t the only one who got the memo.  The bar was packed, with plenty of industry people in attendance, some fans already, others to see what the fuss was about.

On the surface, Walk The Moon is not unlike many indie bands in the public eye these days – they’re playful, and high energy, rock with a dash of synth.  With rainbow-colored face paint smeared on their faces (and available to the audience as well), the set began enjoyably enough.  About three songs in, however, they took off as though bursting from a slingshot.  Where Walk The Moon really shined is when they abandoned the electronic elements in favor of driving percussion, screeching guitars, and let the vocals take center stage.  If the face paint was a slightly gimmicky way to ask that the audience channel their inner child, the performance as a whole unabashedly demanded it. The quartet committed 100% to every song and it paid off: by the time the reached the final song – the catchy, bouncy, pop single, "Anna Sun" – everyone was dancing.

Click here for photos of Gobble Gobble at CMJ 2010 in New York, NY in the QRO Concert Photo Gallery

From there I made my way down 6th St to The Brixton for the much anticipated #MEGABLAAG Party, grabbing a delicious vegan burrito at the Vegan Yacht on the way (the burrito was too surprisingly good not to mention).

I would say that #MEGABLAAG, which was hosted by Ears of the Beholder and YVYNL, and sponsored by ex.fm, was a pretty resounding success.  The event featured DJ sets by Wise Blood, 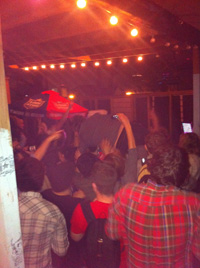 Young Magic, Nite Jewel, and Purity Ring, with a live performance by GOBBLE GOBBLE as the climax of the evening.  There was some wonderfully awkward blogger dancing, and plenty of friendly conversation.  Personally I thought the nametags were a great touch – considering that rarely are people known as anything other than their Twitter handle or blog name online, it was great to be able to connect not only a face to a username – but a first name as well.  Props to all parties involved for doing a great job putting this together.

But back to the music.  This was my second time seeing Canadian electro pop merrymakers GOBBLE GOBBLE, the first being a couple weeks ago at the Troubadour when they opened for Baths (QRO photos) and Braids (QRO photos post-SXSW, back at the Troubadour).  That night, they blew me away with their explosive performance, far and away my favorite act of the evening.  This was not much different.

Despite being in a much, much smaller space, GOBBLE GOBBLE once again delivered.  Being the only live performance of the evening, the crowd was primed and ready (if not a wee bit impatient) for them to get it going.  And get it going they did.  As frontman Cecil Frena conjured storm of beats and synthesizer melodies like a mad scientist, two tutu-clad companions sprung out from behind him wielding a lacrosse stick and shovel covered in white fabric respectively.  Tight quarters meant that their work was cut out for them, but fortunately the cramped crowd couldn’t have been any more receptive, allowing band members push and leap their way through the sea of people with relative ease. To see GOBBLE GOBBLE live is something I cannot recommend enough.  Just make sure to check out their album, Neon Graveyard, first – unfortunately it doesn’t quite capture the dynamic energy on stage and may be a bit of a letdown if you’re trying to relive the joy later.  The set Wednesday night was short, but still managed to pack a wallop – at the end of it every person in the room was left breathless with a big goofy smile on their face, even more excited about what the days to follow would hold.