Some impressive artists in some unexpected ways on Day Two of SXSW.

This is a rock trio from Minneapolis.  I’ve seen enough writers make tenuous comparisons of bands to Pavement (QRO live review) that I should know better than to try it, but Alpha Consumer reminds me of Pavement.  It’s primarily Jeremy Ylvisaker’s humor, his height, and especially his guitar style, which is just how I figure Stephen Malkmus (QRO solo live review, in Austin) would play guitar in a trio.

He wore a Peavey jacket and played some real goofy-looking guitars.  He’s good at rhythm: tight and aggressive – but then his lead style is laden with whammy, bends, and vibrato, with a vague blues foundation (as opposed to an Ash Bowie foundation, if that makes any sense).  Their bassist mostly kept it simple, especially when it was just bass, drums, and vocals.

J.T. Bates didn’t hit the drums as hard as he ought to, but the Mohawk patio’s harsh sound system always seems to make drummers sound beefier.  What he lacked in power and technique, he more than made up for with swagger; dude seemed to be having the best time of the three of them, which is saying something.

They were good at straight-ahead rockers.  The one ballad I heard was competent, but lacking in hooks and pathos.  The loosest jams – those where they seemed to improvise with Bates half-standing behind his kit – were not that interesting.  Even so, their attempt at the ‘is-the-jam-ever-going-to-end?’ gag at the end of the set was funny and musical, full of false endings and near-shredding.  Go see them, and if they need a place to stay, offer them your floor or guest room if you don’t have conflicting plans that night.  They seem like good people.

Oh, man.  I went inside, and this slacker is just playing his CD and thinking he’s hilarious.  Have you ever seen a DJ or electronica set and wondered if the guy was just playing a CD and pretending to perform?  Well, this is just that, minus the pretense.  Albert wants you to know that he is, in fact, just playing his CD.  Actually, he insists that you know, and will remind you every thirty seconds.  He does not fiddle with EQ or appear to concentrate on his deck as if he’s performing.  He just sits, drinks beer, and talks.

And he’s good at it!  Granted, in the hierarchy of watching people do things they’re good at, I’d rather watch someone be good at playing the drums, chopping vegetables, or throwing baseballs, but with Eric Pollard, Dale Ellington, and Brad Barta elsewhere in Austin on this evening, I settled for watching Albert be good at playing his CD onstage.

He really explored the craft.  Some tracks call for a serious face, as he explained and then demonstrated.  Other tracks call for a little dancing in the chair and light banter.  A select few are best accompanied by Albert’s friend Conor taking his shirt off and sitting next to Albert so as to engage him in inaudible banter.  Some are difficult: "I don’t even know how to act during this one."

One was an opportunity for Albert to show his commercial side.  As it played, he announced that he had merchandise for sale, which consisted of lint Conor had emptied from his pocket on to the table. 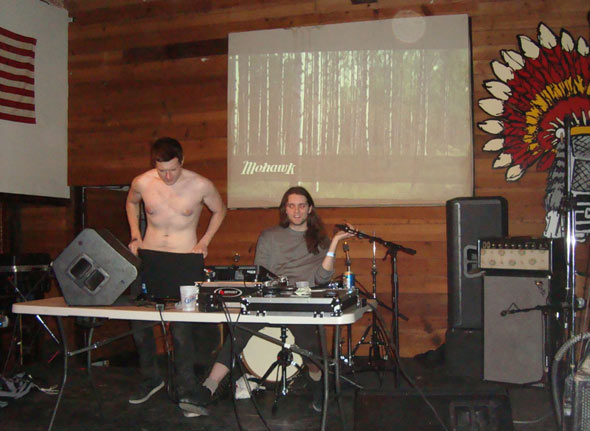 Click here for QRO’s interview of Hull at SXSW 2009

Hull’s a Brooklyn metal band with the skills to make good on its ambitions.  They’ve got three singer-guitarists who smartly sing and play in different registers: Drew Mack growls and plays like he’s holding a baritone; Nick Palmirotto shouts, solos a bit, and strums in the midrange; and Carmine Laietta V plays their best solos and sings in a gruff, New Jersey-ish near-tenor.

They remind me of Neurosis in some ways, including that when watching good Neurosis live videos, I realize that the sonically dense Oakland might not go over well on smaller stages than those they’ve grown to play.  Hull is not that famous, but I hope they get there so they can be on a stage suited to four rigs and three singers.  Their showcase at this same venue in 2009 (QRO recap) had more technical issues than this one, but still the guitars were muddled and Laietta didn’t sing into a mic for some reason.  Also, Jeff Stieber was hitting softer than I remember, but I think that’s because it was their second bout of the evening.

It was still a pleasure; the band has great density, even when chugging along with note-riffs.  They do dynamic variation in metal as well as anyone: their softer moments appear organically and have purpose, never seeming like window-dressing or cheap contrasts to loudness.

They closed with their debut, Viking Funeral, in its entirety, which didn’t sound like it had the narrative that it does on record.  Overall, this was a disappointing show for me, but you should go see them if they come to your town, especially if it’s at a venue you like.  They tend to tour with other good east coast metal bands, as well.

Also from Brooklyn, these guys played fast rock that’s quite heavy for a trio.  They sometimes injected some metal and post-hardcore flavors into the guitar playing and singing, respectively, but these variations sounded like unwelcome distractions to me: they were the times I was reminded of things I’ve heard a hundred times.

It’s the fast and chopsy but straight-ahead rock songs that I enjoyed most.  The drummer hit hard throughout the set, but he grooved best when the rhythms stayed simple.  David Obuchowski turned in some good guitar solos on these tunes, too. 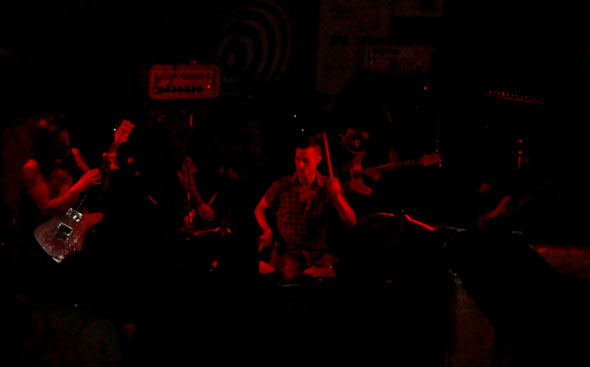 Man, these guys had great stage presence.  Maybe it’s the twitchy moves, or the black outfits.  Maybe it’s the nimble, effortless playing.  Maybe it’s the vocals, which at times seemed to originate from some force beyond Alan Sparhawk to rise above the din.  I know that sounds goofy, but this was a great show, and you should see this band if they some to your town.  Give "Your Bird" a listen first.

Eric Pollard played drums quicker and tighter than anyone I’d seen in a long while, and he hit real hard considering how finessed he was.  He held a firm groove even when playing wild fills every other bar.  Occasionally, playing wild fills every other bar crossed the fine line to become total drumming mayhem, which was to my ears much less unique and groovy than his norm.

Yet these were just a few moments of overplaying in a half-hour set, which amazed me.  Ordinarily, his whole method could be called overplaying: he’s hammering out tricky fills and well-articulated 32nd-note high-hat runs and heavily ghost-noting his way through what are essentially classic rock power-trio songs.  That he makes this drumming style seem appropriate – even ideal – for the music is awesome.

Mind you, this wasn’t some Ruins fall 2007 or Damon Che plays Don Caballero situation where it’s all about the drumming.  Sparhawk was skilled at guitar, with majestic tone, and Steve Garrington was alternately Rick Danko-rootsy and Holger Czukay-trebly, and always quick, on bass.  It’s all about how they played together, though; Pollard wouldn’t get away with all those tricks playing with inferior rhythm guitar and bass.  If you’re amused by musicians that play as tight as anyone, but seem to each be entirely in their own worlds, you’ll especially enjoy this band. 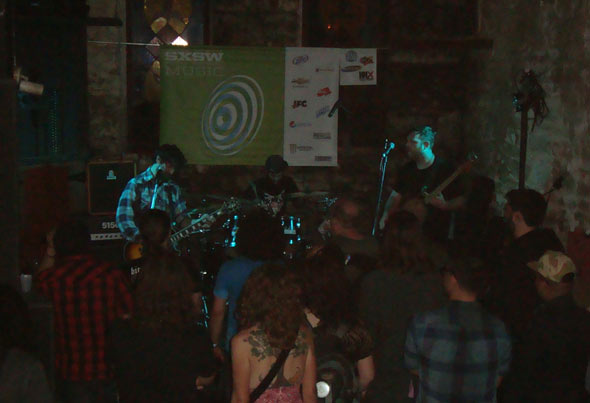 Much of the Skinny’s crowd looked mature enough to have seen East Bay Ray and the Dead Kennedys in the ‘80s, but I think everyone was happy to hear "Holiday in Cambodia" and "Too Drunk To Fuck".  Of course, a couple idiots who looked about my age started shoving and throwing elbows to set the mood.

I’m inclined to write that the Killer Smiles riffs I heard aren’t nearly as catchy as those classic Dead Kennedys riffs, but the bias in favor of familiarity is strong enough that it wouldn’t be fair.  It is fair, I think, to conclude that this band’s live performance sounds more polished and refined than early Dead Kennedys recordings.  Singer Skip McSkipster is fronting the recent incarnation of the Kennedys, and he got pretty Jello-esque on stage.  Although I don’t fully understand the psyche of Dead Kennedys fans, I expect they would enjoy this band.

East Bay Ray’s a fine guitarist.  Some friends were comparing him to Duane Denison a while back, which is worth brief consideration.  Ray’s nowhere near as visceral, and not quite as precise with his right hand, but they both make their most complicated riffs look effortless and seem way better than they need to be for the sort of music they’re playing.

-O’Brother @ Lambert’s, 8:45pm.  If I walked that far southwest, I might have missed precious moments of ALBERT!)