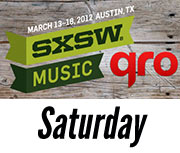 Going into SXSW 2012, one big fear was that the dates of the festival had SXSW Saturday fell on St. Patrick’s Day, a.k.a. the biggest day for amateur drinking this side of New Year’s Eve.  It was already a problem when it fell on a Thursday last year (QRO recap) – and this time it was on a bigger day for SXSW, and on the weekend.  One had visions of local bros & hos dressed in green invading every event serving alcohol (let alone the ones with free drinks…).

However, the actual results on the ground were different.  Many of the venues & spaces in Austin realized they could make more money just throwing a ‘regular’ St. Patrick’s Day party (if there was music, it was bands you’ve never heard of who sound like the theme song to Rescue Me).  It seems lots of musicians didn’t want the trouble, either, and just didn’t play, perhaps getting out of Austin early.  Whatever the case, SXSW Saturday 2012 had far less to see than prior years, for better or worse. 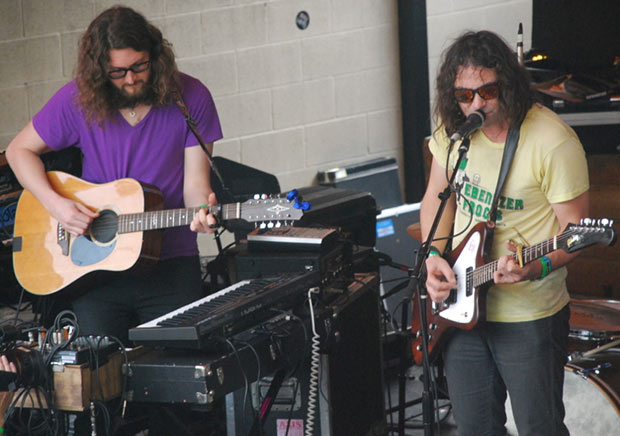 Click here for QRO’s review of The War On Drugs at Electric Ballroom in London, U.K. on February 28th, 2012

Click here for photos of The War On Drugs at Music Hall of Williamsburg in Brooklyn, NY on May 16th, 2008 in the QRO Concert Photo Gallery

But I already knew where I was going on Saturday: the MOG party at the Mohawk (or ‘MOGhawk’…).  MOG handles the ads on QRO, so I was able to RSVP for VIP and skip the long line to enter.  Of course I wasn’t on the VIP list when I got there, but showed them my correspondence with MOG and was given the VIP wristband, which let me into the balcony above, including space with free drinks.  And this was right after seeing some hippie-hipster in front of me on VIP line fail to talk his way in, when he seemed to think he could just say he was on the list and enter – it was rather pleasing to see the presumptuous hippie-hipster get shot down…

The War On Drugs are kind of seventies post-hippie guitar rock, not exactly my style, but good for that. 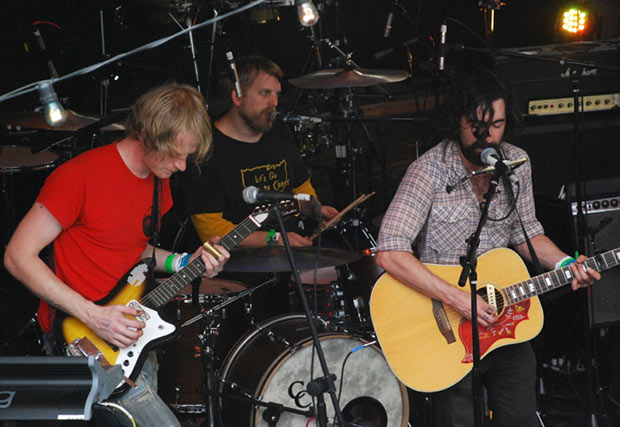 More country-hippie guitar rock from Blitzen Trapper, and I was still more interested in the scene than the music.  From the VIP balcony you could look down at the long, long regular line for entry, which looped around itself (and the venue was undoubtedly already at capacity, at least judging from the crowd inside the doors).  Upon looking down at the crowd, one person remarked, “It’s the closest I’ve ever felt to being in the 1%.” 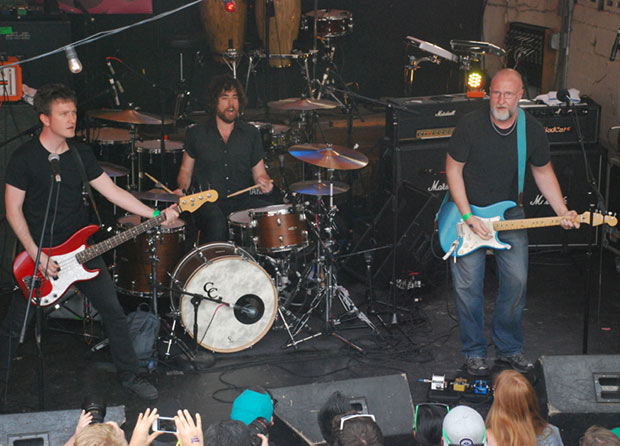 The reason there was such a long line was because Late Night with Jimmy Fallon‘s The Roots were headlining (see below) – but I was there for Bob Mould playing his iconic album Copper Blue.  The 1992 debut release by his post-Hüsker (QRO spotlight on) band Sugar was one of the records that got me into alternative music (though it was probably his most successful release), and was why I pestered the MOG people until I knew for sure I was on the list (or at least had the e-mail paper trail to prove it if I wasn’t…).

Admittedly, it would have been better seeing Copper Blue in a regular club, not outdoors during the day, and would have been better if the crowd was there to see Mould, not mostly waiting for The Roots (or out on St. Patty’s).  One person said it was amazing seeing him do Copper Blue at Noise Pop in San Francisco the month before.  So probably something I should see again.

But I could listen to Copper Blue on a loop for the rest of my life.  There isn’t a bad, or even non-excellent track on the seminal record, from “The Act We Act” to “The Man On the Moon”.  But they skipped penultimate track “The Slick”?!?  How will I know what they said what the road was?  I of course complained about this to Jon Wurster, drummer for Bob Mould Band, Superchunk (QRO live review), and one of the funniest musician-as-tweeter out there (@jonwurster) – right up there with @tedleo (QRO photos at SXSW 2011).  He’s also a lot younger, or at least younger-looking, than you’d expect. 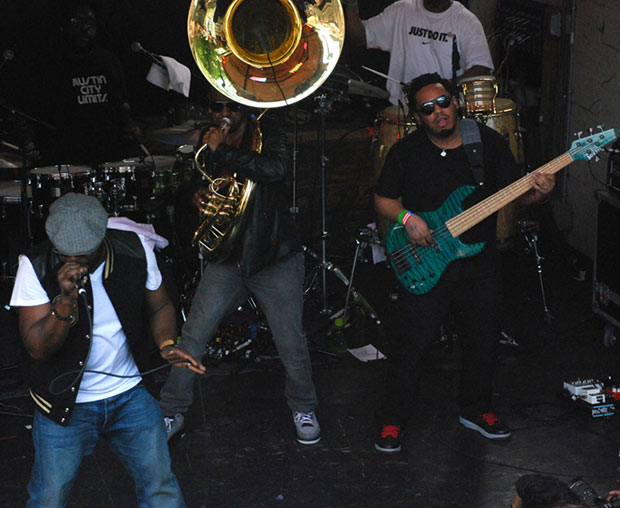 Click here for photos of The Roots aboard The Intrepid in New York, NY on September 29th, 2011 in the QRO Concert Photo Gallery

Click here for photos of The Roots at Prospect Park Bandshell in Brooklyn, NY on July 11th, 2010 in the QRO Concert Photo Gallery

Before they went on stage, The Roots took the time to look out from the balcony on the long 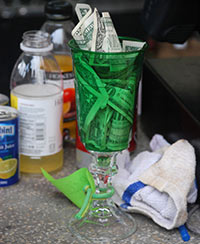 line to enter Mohawk.  A photographer asked them for their picture, and told them that she was (like them) from Philly, and pulled out her driver’s license to prove it – “She’s a card-carrying Philly…” Black Thought said. (“I’m from central Jersey…”  “That’s still closer than Austin…”)

After Copper Blue, I have to admit I wasn’t really giving The Roots my full attention.  It was also packed in Mohawk, even in the VIP balcony.  I think Chris Cab (see below) & others came on to perform with them.  But I was more interested in the green mugs some people had – their mother had made them special for the holiday… 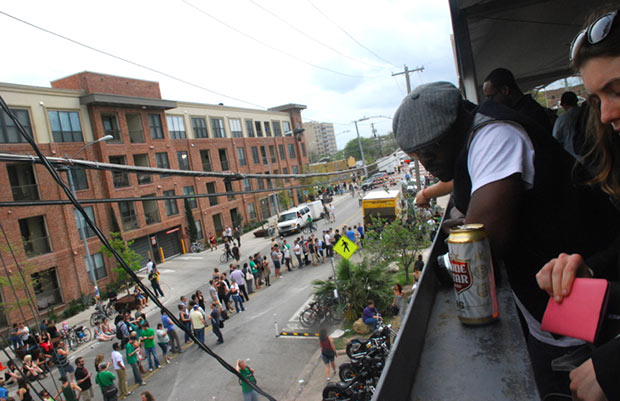 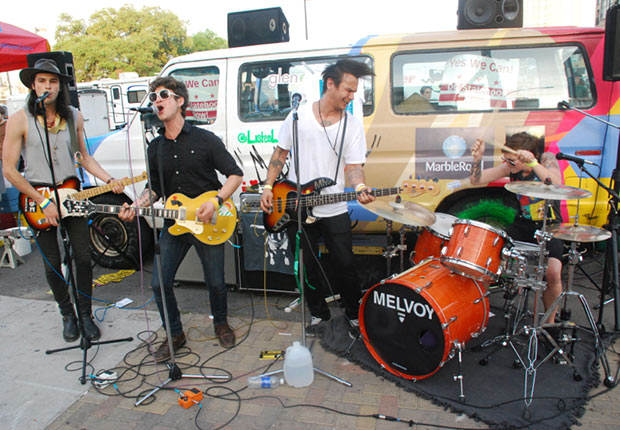 After seeing Copper Blue and not really watching The Roots, it was clear that I was SXSW spent.  Talked on twitter with Cold Fronts, but missed their actual performance on the corner of 5th & Brazos.  It was a real, licensed event (though don’t know by who), which also included friend-of-the-Q Courtesy Tier.  Cold Fronts did give me a beer, and did see who I think were Melvoy on the corner. 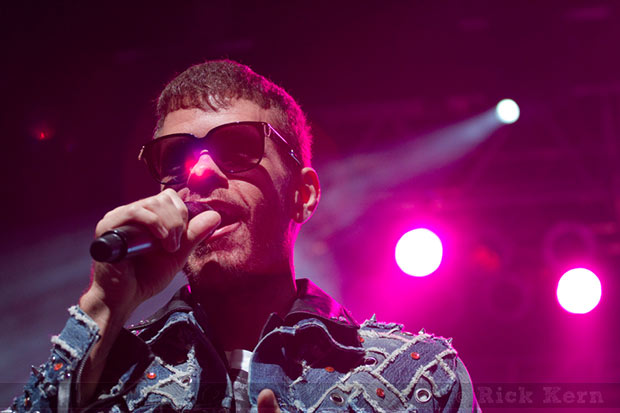 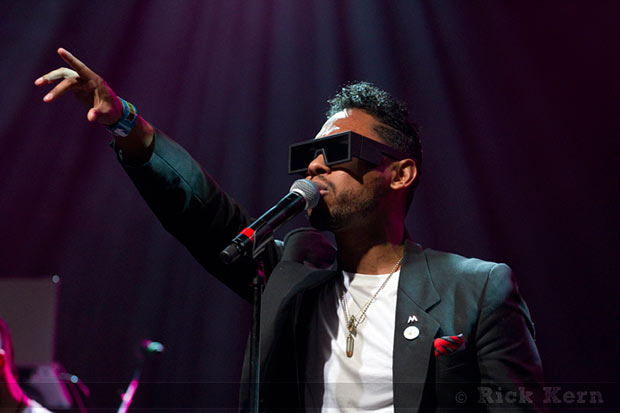 Two years ago, maybe my favorite SXSW showcase was the unofficial one put on by Perez Hilton, which for me included skipping four different lines to entry, seeing Hole (QRO photos) in an unused supermarket, eating cupcakes in the ‘backstage’ which was the vacant supermarket’s vacant manager’s office (fake wood paneling & all), telling the guy from Sum-41 that he, “Needs to be more metal,” tweeting about his less-than-interested response, “Who does he think he is, Blink-182?”, and also tweeting the Snoop Dogg (QRO photos) was “a fragile bitch” for kicking everyone out of the (already very smoke-filled) ‘backstage’ (QRO recap). 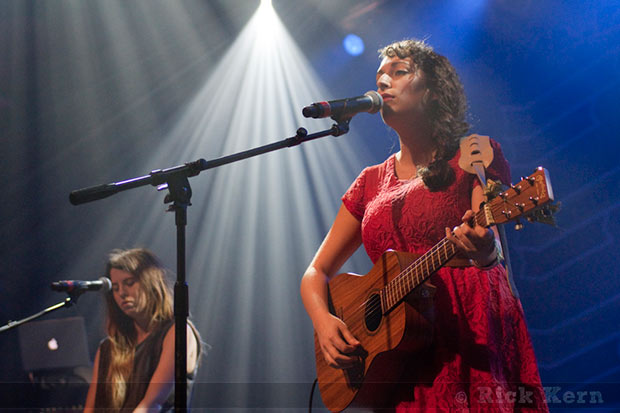 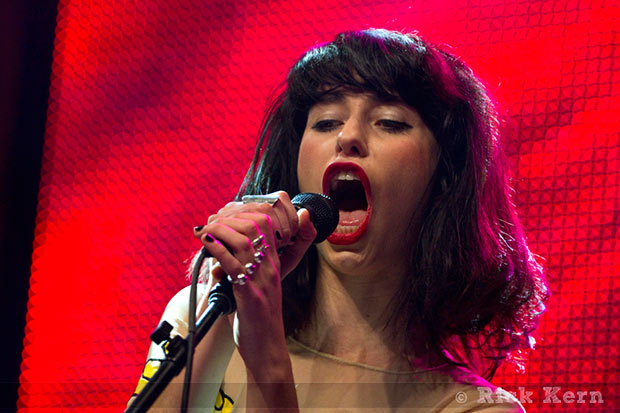 Last year, Hilton went up-market and official at SXSW, moving to the classy Austin Music Hall for an official showcase.  It had a VIP area with free drinks, and a real stage & photo pit – but also photographers had to wait backstage between the first three songs of each act.  And while there was no Snoop or Courtney Love, there was Liz Phair (QRO photos) & a girl (QRO photos) from Gossip Girl (QRO recap). 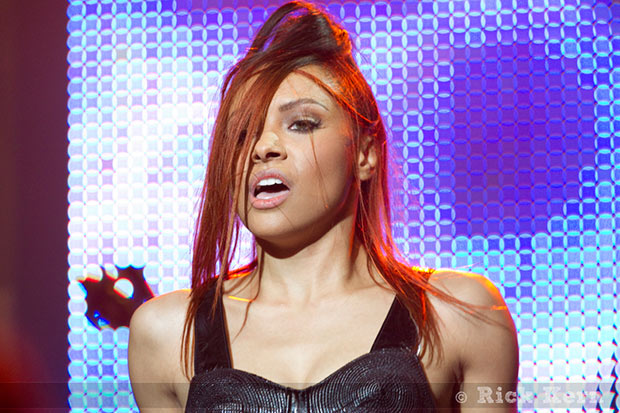 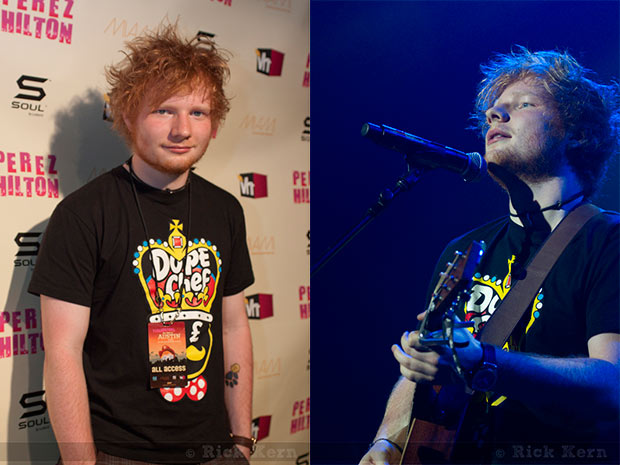 This year, Hilton was back at Austin Music Hall, with a lot of dance-hop acts I didn’t know plus late headliners The Ting Tings (QRO album review) – and then The Ting Tings canceled their entire visit to SXSW.  Still, there wasn’t much else going on Saturday night (see short ‘Unfortunately Missed’ below), so figured it was worth attending. 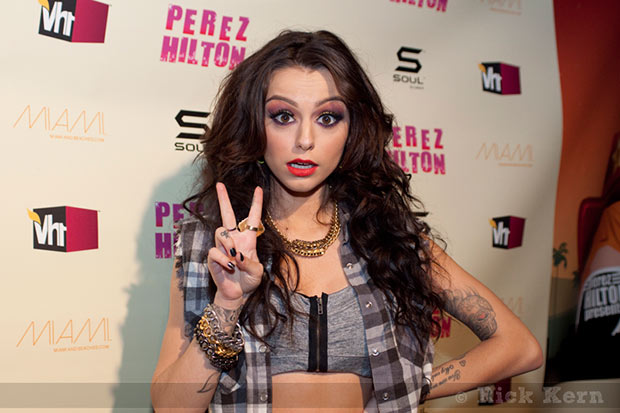 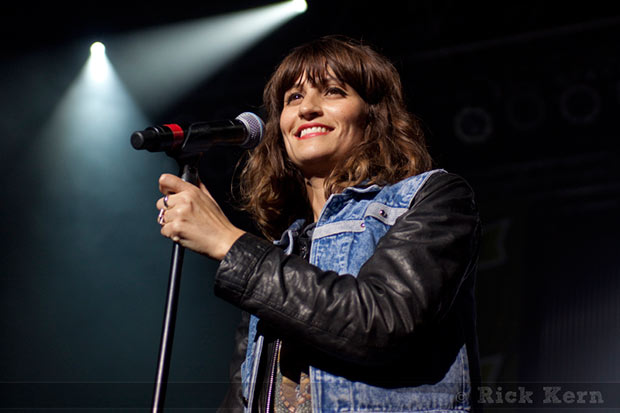 But then there was confusion about media credentials that forced me to go through the roped zigzag entry line twice, even more confusion inside about how to get where, what was where, and more.  Literally people working there couldn’t tell you how to get to the stage floor and see the acts.  Media were expected to wait between bands in some side ‘Media Room’.  And then there was a VIP area that I couldn’t enter at one entrance but could at another, yet the entrance I got in through I couldn’t leave through, but could leave through the entrance I couldn’t enter in from (got that all straight?…).  And don’t even get me started on trying to find a (much-needed) bathroom… 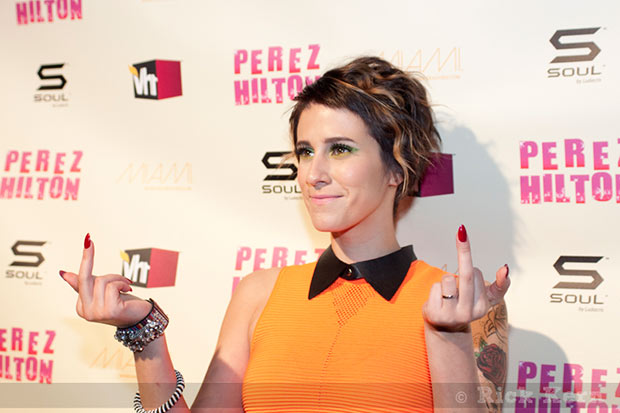 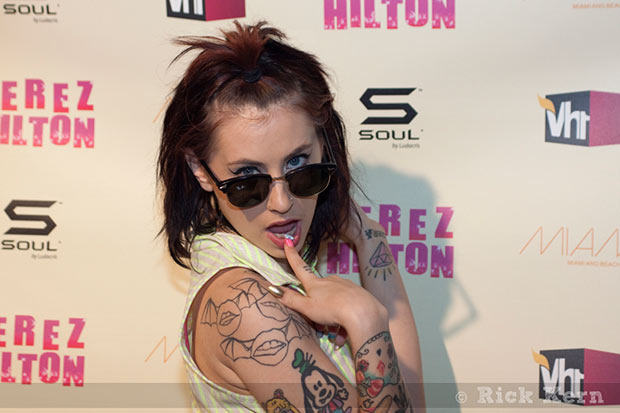 By the time they taped over the free outlet in VIP so you couldn’t charge your phone, and I was falling asleep in the corner, it was time to go (which was a whole ‘nother problem…) – and end my South-by-Southwest. 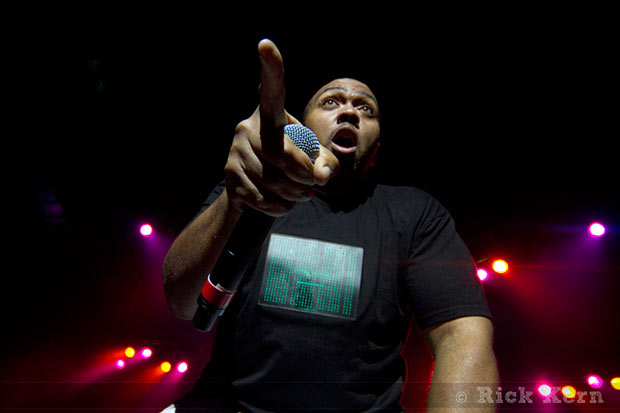 Thankfully, QRO’s Rick Kern was there for the whole event, from 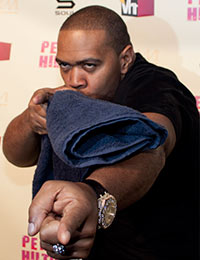 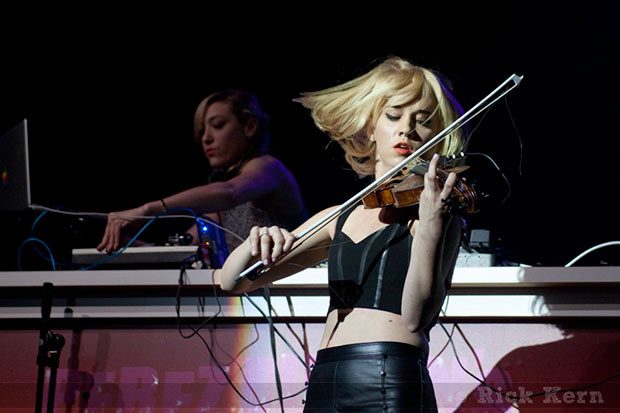 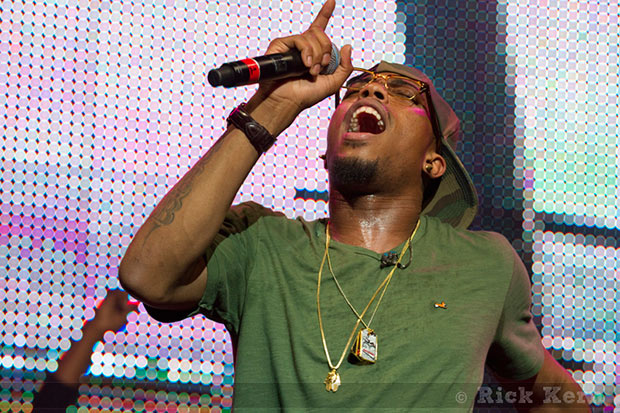 -Snowden (QRO spotlight on) & The Features (QRO live review) @ Lucky 13.  Had no idea when anyone was playing at Lucky 13.