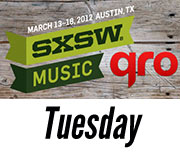 South-by-Southwest began a day early in 2012, finally matching its New York City competitor CMJ (QRO recap) by running Tuesday-Saturday.  Still, Tuesday was by far a lighter day than the rest, and my daytime was taken up by picking up credentials, both official & unofficial – did have the nice surprise to discover that a member of the press could skip the long lines at PureVolume House and Hype Hotel and head straight to the media/VIP side of the table to get special credentials. 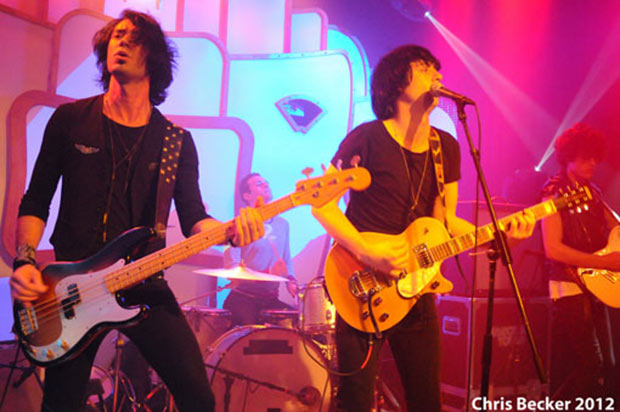 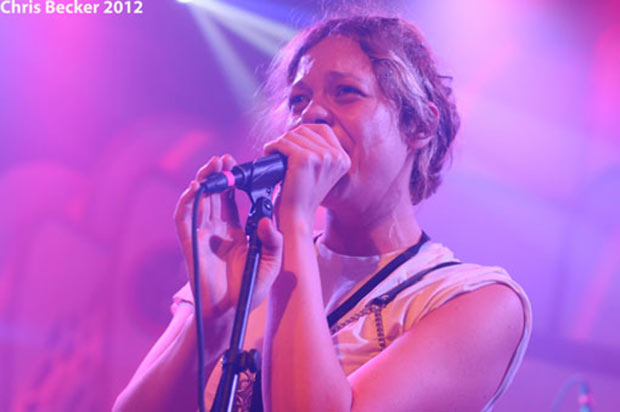 Chris Becker made it to Austin on Monday and caught MNDR and Electric Touch at the Formspring party at Bandpage HQ. 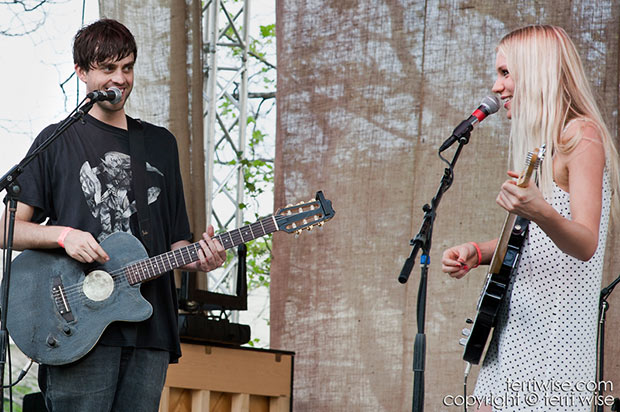 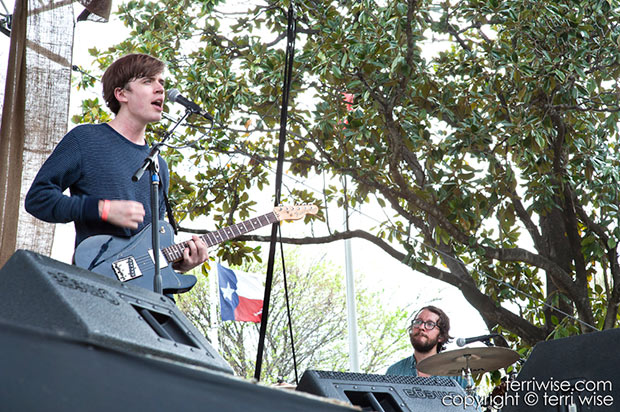 Terri Wise was active during the day on Tuesday, heading east to French Legation Museum (which is actually the outdoor space behind the museum) for Yellow Ostrich and Big Deal, before heading to Beauty Bar then The Parkside for Sleepy Vikings, a great Guards set, and Slowdance to close the evening (see below). 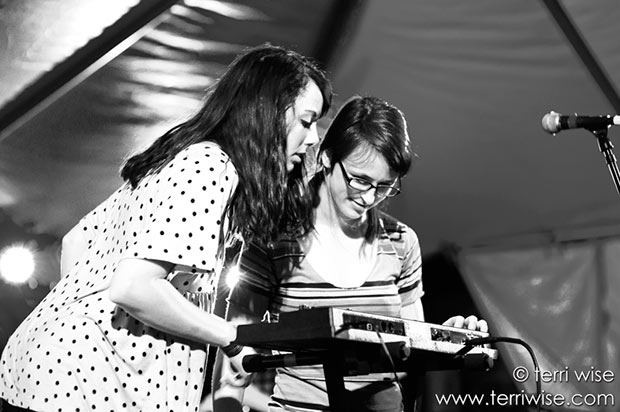 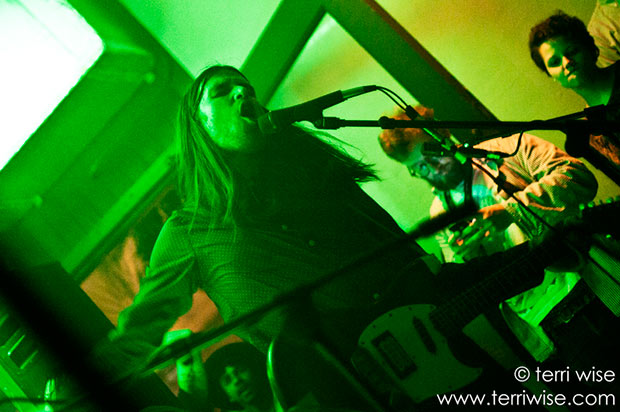 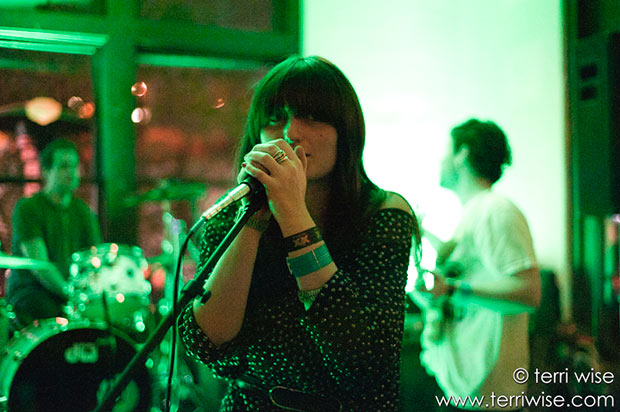 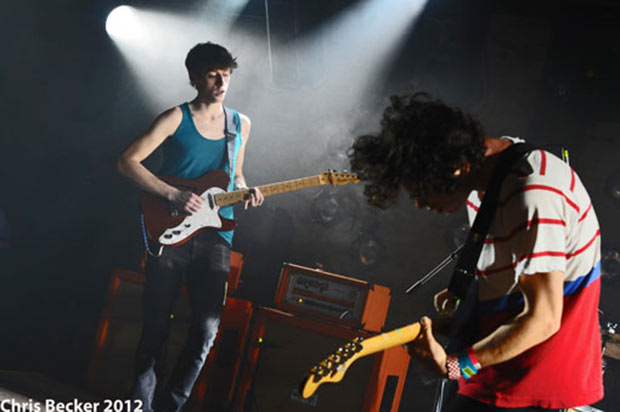 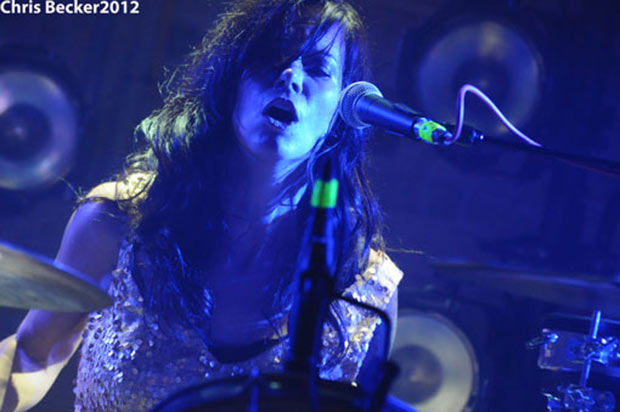 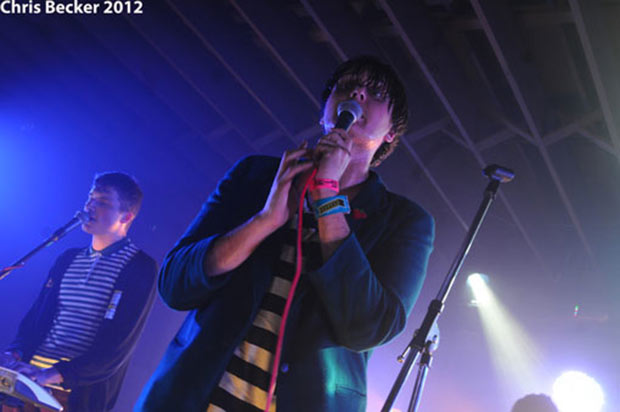 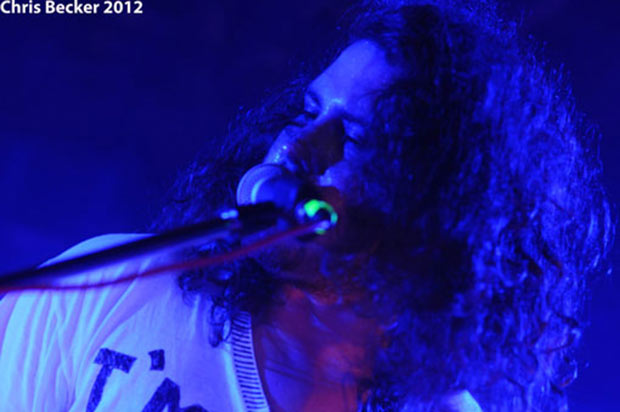 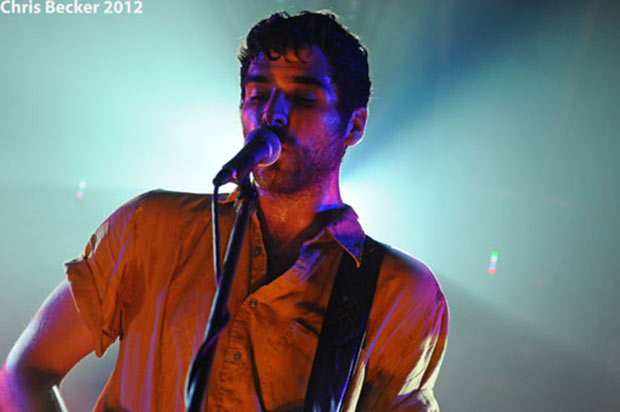 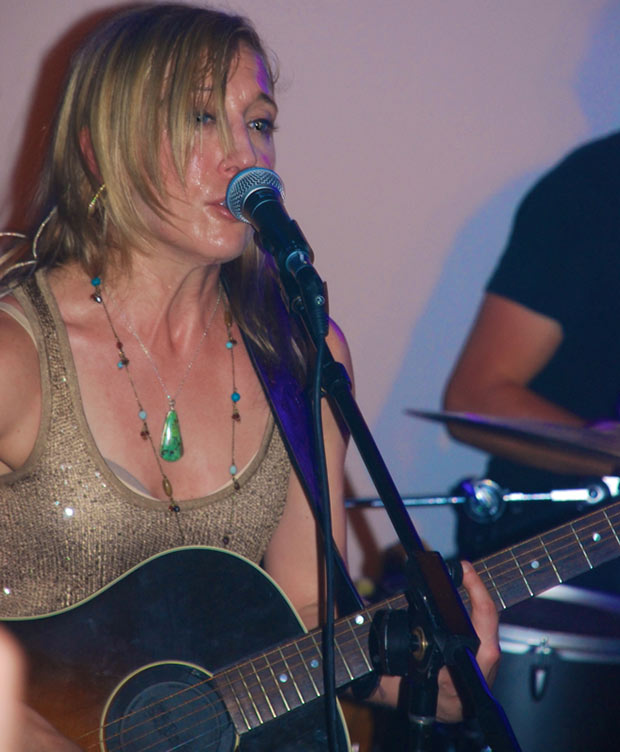 Click here for photos of Heartless Bastards at Webster Hall in New York, NY on February 24th, 2012 in the QRO Concert Photo Gallery

Click here for photos of Heartless Bastards at Webster Hall on March 27th, 2009 in the QRO Concert Photo Gallery

After a post-flight nap, finally began actually seeing some music, starting with a band that would fit well in Texas – Erika Wennerstrom’s twang-rock Heartless Bastards.  Unfortunately, it was at Club 606 (which may or may not have also been Empire Automotive and/or the BandPage HQ), a tiny indoor space packed to the breaking point.  Ended up having to stand on the arm of a couch while leaning over people, balancing with one arm on a pillar, while using the other to stretch around the pillar with my camera, and still Wennerstrom herself was hidden behind speakers.  After I got one ‘good’ shot of her, knew that I’d hit my peak and left (didn’t help that I had just seen the band from the lip of the stage a few weeks prior – QRO photos).

There wasn’t much else going on Tuesday night, so thought I’d try the classy-looking party at Austin Museum of Art.  Unfortunately, after waiting in line, discovered that RSVP’ing meant nothing – one could still get in, but only got a ticket for one free drink (and it was limited to one kind of beer or one kind of mixed drink).  If you’re doing a SXSW party with free drinks, don’t do drink tickets – it just looks cheap (and creates extra paperwork).  And limiting the drink ticket to only a few options does those likely-sponsors no favors – I saw people get to the bar only discover what their ticket could get them (and there were people with wristbands for unlimited free drinks…) turn around and leave.

I got my beer, found a rare seat, drank it, and left.  Thought about shooting Teengirl Fantasy, but do you need photos of two guys on laptops with sponsor logos shining behind them?… 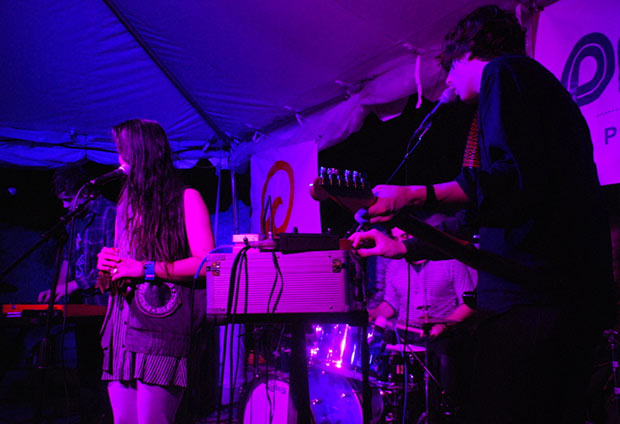 In the relatively barren wasteland of Tuesday night, Prefix Magazine and Manhattan venue Piano’s (QRO venue review) put on a free show at Club de Ville.  Even if Club de Ville is basically a tent with a bar, and it was running a band late, still worth showing up.  New Moods sounded like SALEM (QRO spotlight on) or one of those other chill/witch-wave bands I don’t really listen to. 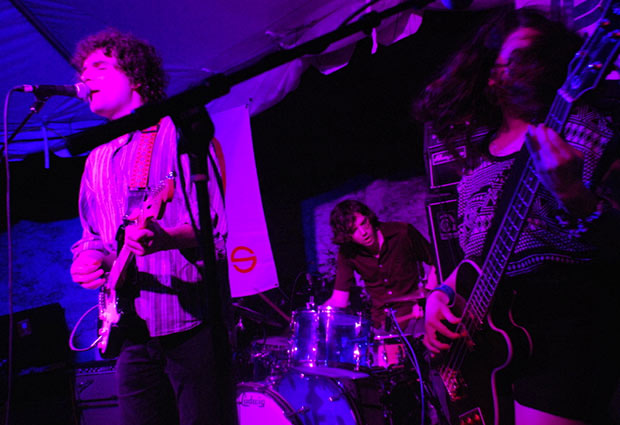 Click here for photos of Caged Animals at Shea Stadium in Brooklyn, NY on February 10th, 2012 in the QRO Concert Photo Gallery

At their best, Caged Animals reminded of The Pains of Being Pure at Heart (QRO live review), like the soundtrack to a John Hughes film from the nineteen-eighties.  But they weren’t always at their best. 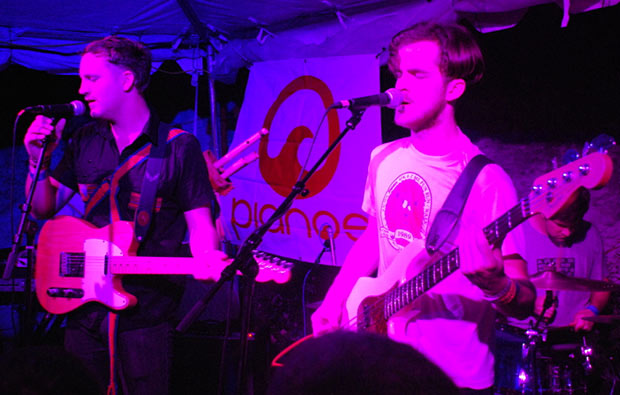 Click here for photos of Gardens & Villa at 2011 Constellations Festival in Leeds, U.K. in the QRO Concert Photo Gallery

Click here for photos of Gardens & Villa at Lexington in London, U.K. on November 3rd, 2011 in the QRO Concert Photo Gallery

Does the singer of Gardens & Villa have a bag of flutes?  Yes, yes he does, apparently – wooden ones that he only pulled out near the end (in the shoulder bag strapped across his back, kind of looked like he had a set of bagpipes – which would have had more indie-cred?…).  Their sort of disco-meets-nature not to my taste, but not bad, and had its fans. 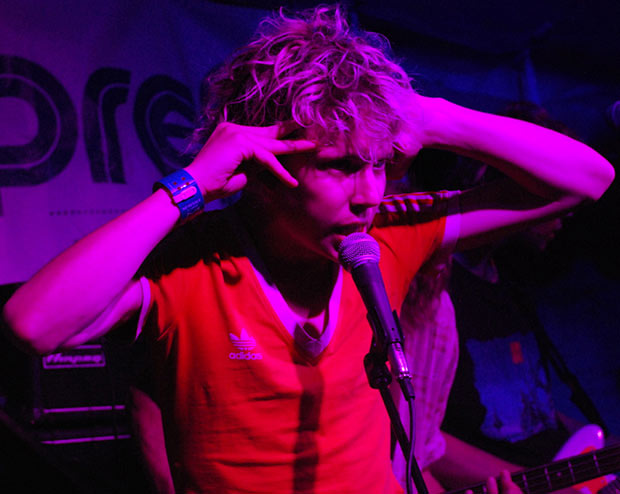 By now I was worried that Hooray For Earth (see below) wasn’t going to get to play, so felt no warmth towards Pond.  Their dirty-psych (with screaming female singer) unsurprisingly does have fans in Austin, though. 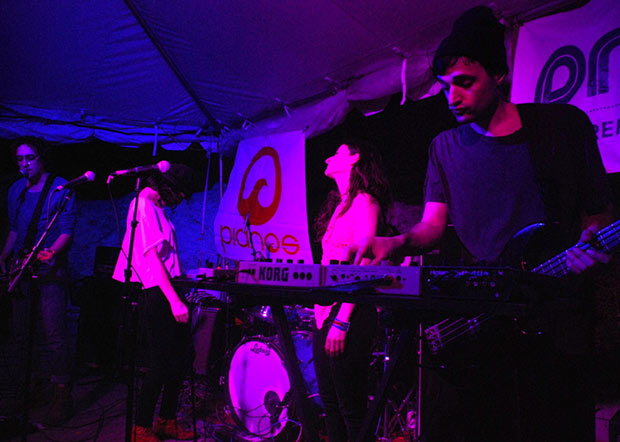 The reason I came to Club de Ville, Hooray For Earth went on not at 1:15 AM like scheduled but literally five minutes before closing, but the space stayed open a bit longer (though the bar did close at 2:00 AM).  They started and ended with the ladies Zambri (QRO mp3 review) – one of the sisters is married to Hooray singer Noel Heroux – and I finally like the Hooray songs with them as much or more so than the Hooray songs without them (the lighting was also mostly on them – but if you could choose, you’d put the spotlight on them too…). 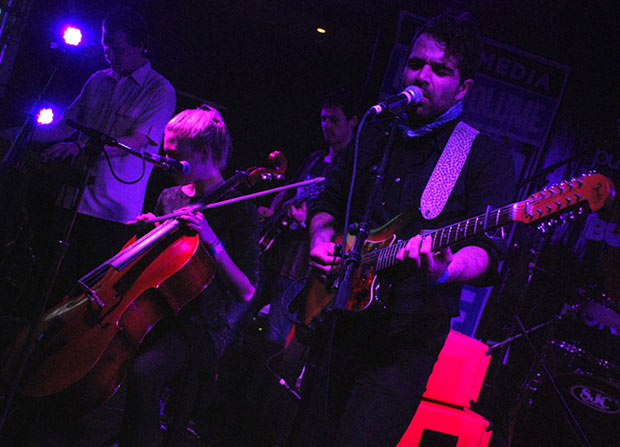 Last year (QRO recap), spent the end of every evening at PureVolume House, since it was the one place that was open past 2:00 AM (better for finding a cab home) and had free drinks.  The House had moved a few blocks south (the old space taken over by Hype Hotel) and into much classier digs.  It also didn’t have sub-par free drinks, but there were a lot of dressed-to-look-as-official-as-cops fire marshals on hand, including watching the bathroom line.

Everybody seemed to be there for the free drinks, as no one knew them name of the band playing, Choir of Young Believers (admittedly not an easy name to remember, or to tell someone else in a loud club). 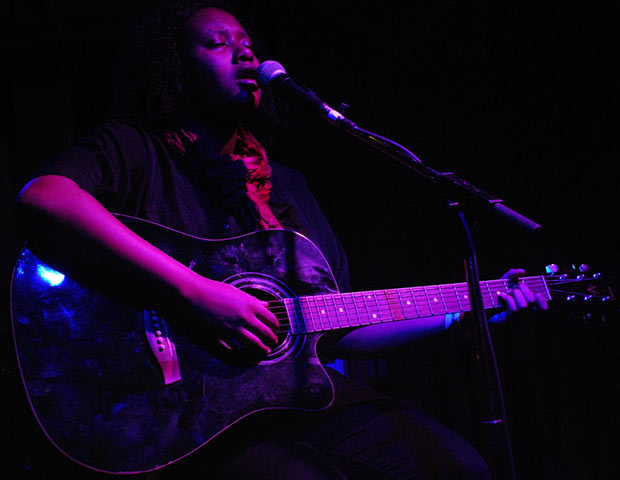 Who thought it would be a good idea to schedule a solo singer/songwriter like Mirel Wagner, with only her acoustic guitar, at 3:00 AM at an open bar?  Even I wasn’t listening…

-Oberhofer (QRO photos), 8:00 PM – 9:00 PM @ Hype Hotel.  My post-flight nap caused me to miss the start of this Conflict of Interest party, but Chris Becker caught them (see above).

-We Are Augustines (QRO album review) @ Antone’s, 10:00 PM.  While interested in this post-Pela (QRO spotlight on) act, Antone’s was way too far to the west.

-Not In the Face! @ The Main, 1:00 AM – 2:00 AM.  One of two bands at SXSW 2012 that I wanted to see based on their name and nothing else, this one because it was Arthur’s losing submission as proposed battle cry for him and The Tick (on the great cartoon series The Tick).  And the winner was “SPOON!” (QRO live review)…