Taken By Trees : East of Eden 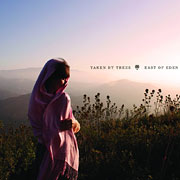 With heart-melting elegance on her second album as Taken By Trees, Victoria Bergsman’s quickly leaving the former projects that she’s most known for in the dust.  On East of Eden, she’s developed a distinctive low-key charm that’s constructed of enrapturing rhythms, tantalizing melodies, and her delicate delivery.

Inevitably relaxing, East of Eden‘s nine tracks glide by with a gentle sway, but they’re also tinged with a surprisingly exotic hue.  The smooth crescendo of chanting that opens "Anna", the flute riff on "Watch the Waves", and the subcontinental cameo on "Wapas Karna" all add spice to the cozy atmosphere.  Hints of flamenco influence give album opener "To Lose Someone" an undeniably cool charm as guitars mingle with entrancing percussion.  The most noticeable song on the album may be the cover of Animal Collective’s "My Girls", which Bergsman reworks as "My Boys".  It’s an effervescent, yet low-key, effort that has a fun, campfire comfort and it absolutely succeeds.  Throughout East of Eden, Bergsman shows off a bevy of quietly exotic innovations that make the album so engaging.

On East of Eden, Victoria Bergsman delivers a stunningly sophisticated and endearing effort.  Each track is uniquely charming, and the album is full of surprises while it emphatically raises the bar on her career.

The Twilight Sad : Forget the Night Ahead