Tears For Fears – The Tipping Point

Eighties nostalgia has been all the rage for decades now, but one aspect that has made a particularly welcome return has been the synthesizer.... 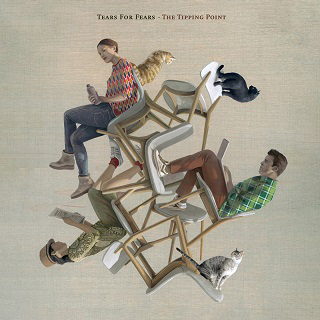 Eighties nostalgia has been all the rage for decades now, but one aspect that has made a particularly welcome return has been the synthesizer (unlike the particularly unwelcome return of a Russian threat…), which has even been replacing the electric guitar as the go-to instrument. So, it’s no wonder that eighties synth masters Tears For Fears not only reunited, but are now putting out their first new studio album in almost twenty years, The Tipping Point.

Click here for photos of Tears For Fears at 2019 Shaky Knees in Atlanta, GA in the QRO Concert Photo Gallery

Click here for photos of Tears For Fears at 2014 Project Pabst in Portland, OR in the QRO Concert Photo Gallery

Admittedly, Tipping is not a hit-filled revelation like their classic Songs From the Big Chair, and the ubiquity of synths these days, not to mention the ubiquity of the eighties now, means it doesn’t even quite stand out. But Roland Orzabal and Curt Smith certainly know their way around not just a synthesizer but how to make music around it (even with guitars). There’s the great glowing synths of “Break the Man”, the shining sadness of “Long, Long, Long Time”, and the expanse & touch of the title track. Plus, the record isn’t one synthetic note, with the kind country open “No Small Thing” (though kind of a strange track to open with) to the slightly odd big-dark “My Demons”.

Everything seems to come back around, good or bad, but Tears For Fears’ own revival has been an appreciated one.