Tears for Fears kicked off their U.S. tour in, yes, Ohio.... 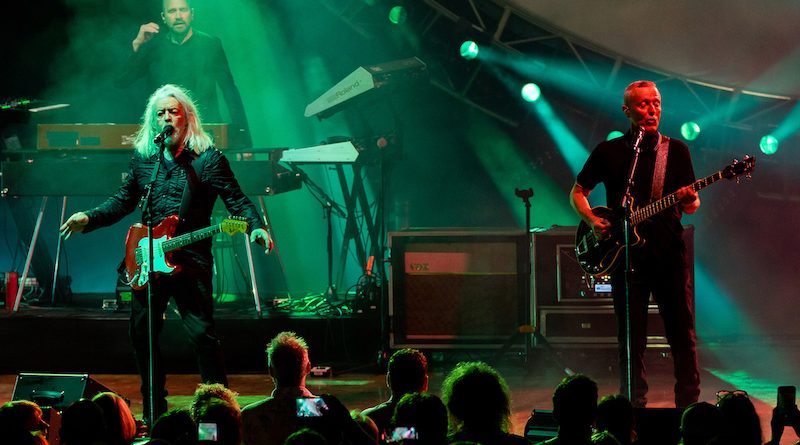 Tears for Fears kicked off their U.S. tour in, yes, Ohio, with one of the first shows at the Blossom Music Center in Cuyahoga Falls on Saturday, May 21st. While ‘80s mainstay Alison Moyet would open for them in the U.K., ‘90s rock band Garbage are opening for them in the States. Garbage has been touring pretty regularly the last couple of years after a lost 2020, primarily opening for Alanis Morissette. Their most recent record No Gods No Masters (QRO review) was also critically acclaimed and displays some of the anger and fierceness of some of their earlier work.

Whether the show would actually happen was a bit questionable at the start because thunderstorms were forecasted and a torrential downpour occurred soon after doors opened. The start was first pushed back 15 minutes, then 30 minutes, as the rains continued. The regular seats out on the lawn were all moved to seats that were under cover and the event soon began. Garbage was in excellent form and Shirley Manson’s voice is as good as ever. She has that relentless energy that’s evident as you see her pace back and forth on the stage. As the opener, their setlist is shorter and only had two songs from their latest record. However, they did play most of their bigger hits, which had the crowd giving them a standing ovation, which left even Manson speechless. One was waiting for Manson to say something about “I’m Only Happy When It Rains”, but it didn’t happen. Nevertheless, a great performance!

Click here for photos of Tears For Fears at 2019 Shaky Knees Festival in Atlanta, GA in the QRO Concert Photo Gallery

Click here for photos of Tears For Fears at 2014 Project Pabst in Portland, OR in the QRO Concert Photo Gallery

Roland Orzabal & Curtis Smith, a.k.a. Tears for Fears, played a nice long set which not only included all the hits from their heyday in the ‘80s, but also seven songs from their new record, The Tipping Point! Their oldies got the most cheers but the intense “My Demons” from The Tipping Point also received a loud and raucous reaction from the crowd. Both Orzabal and Smith sounded amazing, although maybe not quite as smooth as the kids from 1983. Backup singer Carina Round did an amazing job and even sang the lead for “Suffer the Children”. The highlight was probably “Badman’s Song”. It’s a track that really lets the band stretch themselves and rock out. Several times, some less familiar with the song though it was over and started clapping as the song continued. They wrapped up the night and the encore with “Changes” from “The Hurting” and their biggest hit “Shout”. Not even the rain could dampen the mood of this crowd as they exited the venue.