Tegan & Sara have always had an especially close with relationship with their fans.... 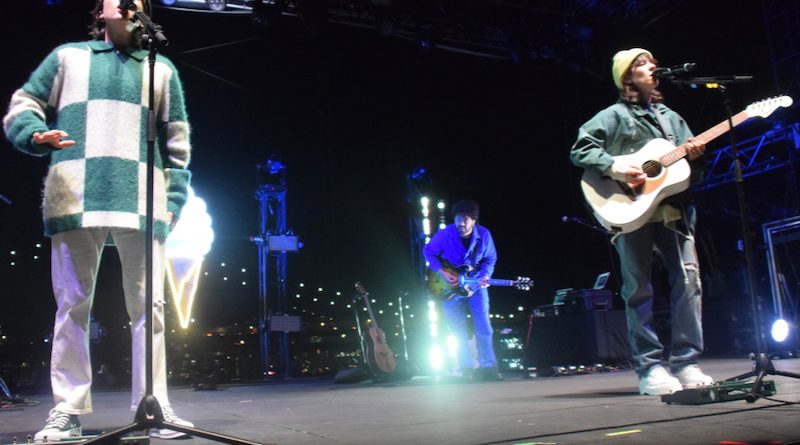 Tegan & Sara have always had an especially close with relationship with their fans. Some of that comes from singing queer love anthems for girls who usually don’t hear those, but there’s also their awesome twin sister banter, whether on stage or on livestreams, such as their COVID lockdown-era ‘Where Does The Good Grow?’ series (that was mostly about gardening). They put out a memoir of their High School days, and recently a TV show based on it premiered. And so, the fans came out on a rather late-in-the-year-to-be-having-an-outdoor-show Saturday, October 29th, the final night of The Rooftop at Pier 17 series.

Pier 17 (QRO venue review) stretched this late in the year to get the Halloween crowd, but it was a little chilly & breezy on the East River to put your dancing shoes on. Of course, it’s nothing to a pair of Calgary girls like the sisters Quin – but then again, Tegan did get diagnosed with laryngitis the next night in D.C., and had to cancel their Toronto show. And the sisters & the space made it work, them in layers they said that they’d have worn in the nineties, Pier 17 with an impressive video system for the big screens on either side of the stage.

Touring behind the just-out Crybaby (QRO review), the set list naturally drew from the new album, but wasn’t dominated by it, as this was the pair’s first tour in three years (i.e., since COVID), and they’ve been making music long enough to have an impressive back catalogue. The last decade or so has seen them lean more into electro-dance, and there was plenty of that, from opener “Stop Desire” (2016’s Love You To Death – QRO review) to closer “Closer” (2013’s Heartthrob – QRO review), where they mixed a slower start & verse with bigger electro choruses. Crybaby got in on the game with such songs as “I Can’t Grow Up” (performed just two days earlier on Tonight Show with Jimmy Fallon) and “Fucking Up What Matters”, but it was notable how much the pair drew from their earlier, more art-pop days. Yes, there was “Back In Your Head”, the breakthrough single from the breakthrough 2007 The Con, but also that album’s title track, and the encore return was with, “There’s before and after this song,” their career seminal “Where Does the Good Go?”

And there was much of what you really came for: Tegan & Sara banter. The two have the lived-in sisterly shorthand bickering that makes them even more charming. Sara opened about how the two had been more apart during COVID, but upon physically reconnecting, “Maybe I could have been away a little longer, and it would have been fine?…” They alternated telling about sharing an Airbnb while they rehearsed for this tour, Sara blaming the “pathologically frugal” Tegan for booking a “rape death-dungeon,” Tegan pointing out their screaming match over nothing, Sara noting that it was only one of them who screamed (i.e., Tegan), Tegan responding that it’s because there was only one of them who didn’t listen (i.e., Sara). For Crybaby’s “Smoking Weed Alone”, Sara pointed out that she’d only seen Tegan smoke weed once in the last two/twenty years, at their 40th birthday, where she repeatedly told a story about her childhood stuffed animal (adding that they used to roll so hard back in high school – taken out of High School because they were “thirsty” for a TV show). Sara also discussed how they were 42 now, which feels to her like she’s on acid when she says it, with which Tegan pointed out that her outfit looked like she was on acid, and Sara agreed (it was a “safe” outfit for being on acid).

Maybe you’re sold that you think 42 is young (to be fair, both sisters admitted to looking young on the outside, but being “geriatric as fuck” on the inside…), or maybe you’re a high schooler who can really relate to High School (despite it being set in the nineties, so landlines and video rentals…). Whatever the case, it was great to get out for one more night, to get out with Tegan & Sara.

Bush – The Art of Survival