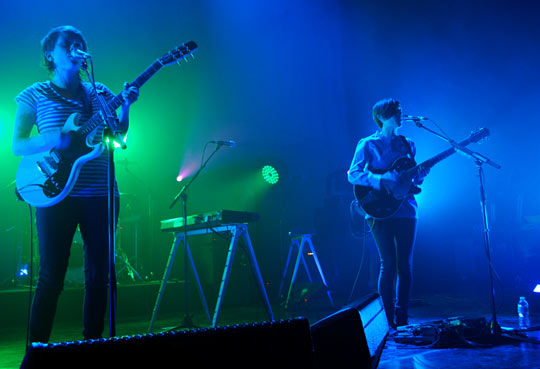 On Thursday, February 18th, Tegan and Sara filled Richmond, Virginia’s eighty-seven-year-old National Theater to the max.  Curious as to how the night would unfold, the first impressive sign was one with two words: sold out.  1,500 people swarmed the East Broad Street entrance that once led audience members to acts such as vaudeville, movies, and the Hal Sands Dancers.   Many waited with frustration in hopes of gaining access to the night’s event.

Steel Train started the night off with an upbeat, tenacious set.  The band won show goers over with their catchy tunes and energy-driven riffs.  The following act, Holly Miranda (of The Jealous Girlfriends – QRO spotlight on), had some high points, but overall, the performance was mellow and low-key. 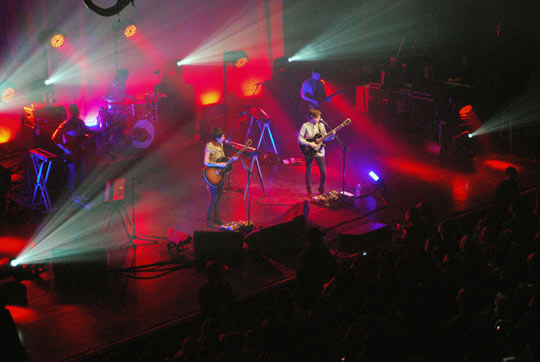 Just as the show’s momentum was slowing its pace, the sound system transitioned from the hottest of hot new hits to some of the ‘oldies but goodies.’  As Roy Orbison’s “Pretty Woman” filled the hall, the anticipation grew to all-time unbearable heights.  Although the fans waited patiently, the National felt like a balloon that was about to burst.  Tegan & Sara finally made their entrance, once the other members of their band had gradually taken their places on stage.  The amps were fired, the lights were dim, and the crowd’s excitement and anticipation had finally exploded into the first song of the identical twin sister’s set. 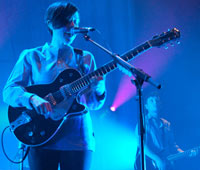 The set was rich with both catchy crowd pleasers and songs from their most recent release, 2009’s Sainthood (QRO review), including “The Ocean”, “On Directing”, “The Cure”, “Sentimental Tune”, “Hell”, “Alligator”, “Night Watch”, “Northshore”, and “Arrow”.  Along with killer songs that reciprocated the audience’s enthusiasm, Tegan & Sara filled moments of their set with between-song banter that made you laugh your pants right off.  And while on the topic of taking clothes off, 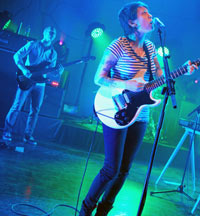 the two were amazed at Virginia’s love of hot tubs.  Apparently two of the state’s venues have them for that back stage party that every air guitar geek dreams of.  Sara Quin, who typically chooses a book and cozy couch, joked that maybe tonight she’d trade her book for a bath… party of 25.  She confessed that when she spots guitarist Ted Gowans from the corner of her eye, sometimes “a little pee comes out,” fearing that he might just be a random creep on stage.  A post-set bath wouldn’t be such a bad idea after all…

Comparing the astounding number of people in attendance to past experiences in the area, the girls joked wondering if everyone was new in town.  From the front row, to the seats in the highest balcony, the sight of silly dancing was a clear indicator of a successful night for the self-proclaimed ‘lesbian elves’. 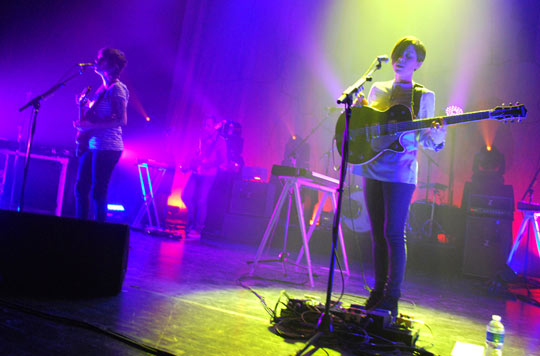 Everybody Was In The French Resistance… NOW! : Fixin’ The Charts, Volume One