Temper Trap recently started their first US headlining tour in Portland with a bang. ... 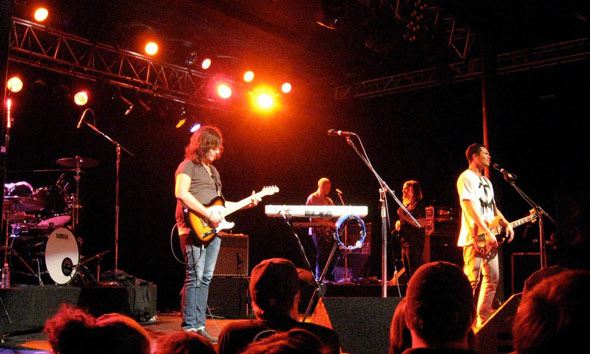 Early last week Temper Trap’s first US headlining tour began showing indications this trek may be successful. Their first show at The Music Box in Los Angeles sold out. Then the third stop in Portland was moved from the smaller venue, Peter’s Room (capacity 400), to the 1,410 capacity Roseland Theater upstairs “due to demand.” Not a bad way to start their tour at all.

Click here for photos of Temper Trap at CMJ 2009 in New York, NY in the QRO Concert Photo Gallery

While the Roseland Theater was not sold out, there were nearly 1,000 fans anxiously waiting to see them. The band (Dougie Mandagi – lead vocals, guitar, Toby Dundas – drums, Jonathon Aherne – bass, and Lorenzo Sillitto – lead guitar) came out to thunderous applause and quickly broke into an extended intro to “Rest,” from their full-length debut Conditions (QRO review). Mandagi stood center stage with his back to the crowd, arms upraised. This was an audience who definitely knew the band’s songs. People were singing along and when the band stopped playing for the break in “Soldier On”, the crowd began yelling “do it do it do it” until the band resumed the remainder of the song. 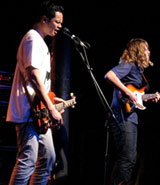 As Sillitto broke into the opening chords of “Sweet Disposition” the audience erupted. Some fans had even hung an Australian flag from the balcony to honor the Melbourne band. Before heading for a quick break, the band took about ten minutes to storm through “Resurrection” and “Drum Song.” Mandagi set a drum near the edge of the stage, poured water on it and began pounding along to the beat spraying water up into the lights. When they came back for their encore, Mandagi yelled “Portland, where you been all my life?!” The band never got caught up in all the adulation and seemed genuinely thankful for the cheers. They closed the night with “Science of Fear” and if this night is any indication of the rest of their tour, they should own the US by the end of it.