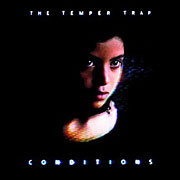 Simply: if you’re down with massive mid-tempo anthems, Temper Trap’s debut album is for you.  Slow-building crescendos inside of huge, galloping rhythems define Conditions, as it’s the type of album you’d likely hear played live in a stadium.  With this release, the Australian foursome heavily puts their stamp on the doe-eyed, arena-sized contemporary pop/rock world.

With tricks learned from bands like U2, Coldplay, and the alt-pop conglomeration of the past few years, Temper Trap produce mass appeal with a strikingly professional touch.  From the opening, falsetto-tinged thump of “Love Lost”, Conditions chugs along a steady pace and ultimately delivers a well-executed, heart-pounding radio playlist.  Tracks like the “Where the Streets Have No Name”-honoring “Sweet Disposition”, the mini-epic “Soldier On”, and the electric “Fader” stand out and give the album solid balance.

If singing wildly along to soaring rock melodies sounds good to you, check Temper Trap out.  For a debut, Conditions is as highly polished as it is hearty, and the band is already well on their way to stardom.